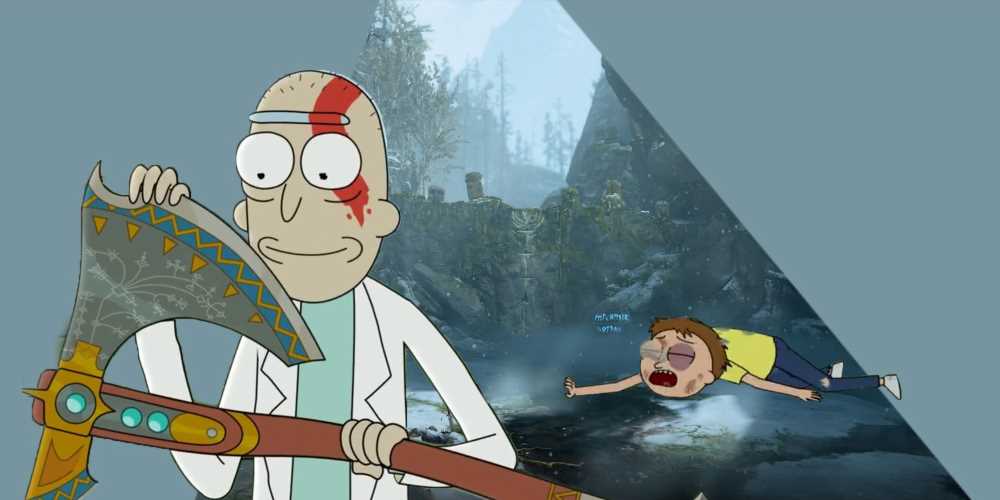 God of War Ragnarok is probably the biggest upcoming launch of the year. We'll finally get to see how Atreus has coped with his godhood, a showdown with Thor, and if leaks are to be believed, even meet the orchestrator behind it all, Odin. And, while we haven't seen too much promotional material for Santa Monica Studio's upcoming title, it doesn't really need it, considering its massive popularity over the years. However, the marketing team went ahead and made an ad anyway, making the most unlikely duo step into the shoes of the father-son duo.

The ad in question was aired during the season six premiere of Rick and Morty, both of whom starred in it. As with most things concerning the two, the ad was pretty random, starting off with Morty entering Rick's lab while he was shaving his head and putting red paint on his face to resemble Kratos. Rick wasn't being subtle about it, as he straight-up told Morty that they're going on an adventure to the Nine-Realms like in God of War.

Unwilling as ever, Morty is then dragged through a portal by Rick, who finds a chest resembling the ones we've seen in God of War, and takes out the Leviathan Axe and "other unannounced upgrades". All this while Morty is under attack by bird-like creatures – yes, those annoying ones – and can't seem to hit any of them with the toy bow that Rick provided. In typical fashion, Rick refuses to help Morty as he doesn't want to get blood on the shiny axe.

Other promotional content we have seen has come in the form of gameplay videos, the most recent one which showcased new combat mechanics coming to the game. We got a look at the Dwarven realm of Svartalfheim, and for the first time, witnessed an inhabited location. Kratos now has two new shields, Dauntless and Stonewall, which let you choose between precision parries and blocking a larger number of attacks. Both the Leviathan Axe and the Blades of Chaos now have new signature moves.

What's more, eagle-eyed fans spotted a move that Kratos used to pull off during his Greek days.