When we first learned about Scavengers from the team at Midwinter Entertainment, it was hard to understand exactly what kind of game it was without getting my hands on it. Midwinter’s goals certainly sounded ambitious; the idea of creating mutual goals in a multiplayer match that would create more nuanced multiplayer scenarios (ones where players wouldn’t always immediately shoot at each other) sounded promising, as did the mix of PvP and PvE elements. After finally having a chance to play a match at E3 this year, however, I have a good idea of what Scavengers is and while its premise is interesting, some of its ideas don’t live up to their promise right now.

The easiest way to think of Scavengers is to use battle royale as a base. Four teams are dropped onto a single, giant map that takes place on an Earth that has become an eternal wasteland after a meteor crashed into the moon. Without supplies, you’re forced to scrounge up resources, weapons, and items in the early minutes of the game. One major difference between Scavengers and battle royale games, however, is that you’re not fighting to be the last person standing, and there’s no circle closing in on you. Instead, you’re collecting DNA samples for Mother, the A.I. which sends you into the eternal tundra in the first place. 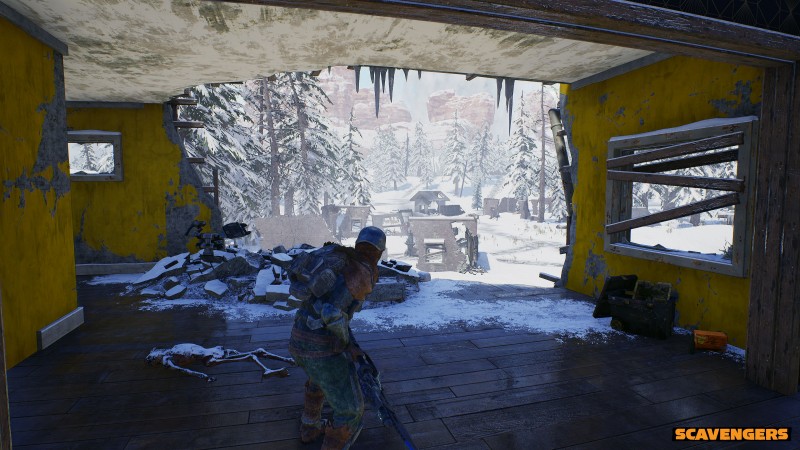 It’s a mutual goal, too; every squad was working to gather a total of 60 samples in our match. Once those have all been collected, Mother sends down a dropship. Your goal is to board that dropship and get out before you’re overtaken by the cold. There’s also hunger and cold meters to contend with, which you have to fill by finding warm areas and feeding off wildlife. Storms also roll in from time to time, giving matches some natural urgency. These factors give you a constant motivation to move forward; hiding out in a settlement and waiting for the player count to drop isn’t going to do much for you here.

Although your three-person squad is made up of individual character classes with distinct roles and weapons, you still need resources to unlock your class’ true potential. I played as the melee-oriented Jae, who could use his character ability to disrupt groups of enemies from up close, but in order to unlock my signature weapon (a halberd-like blade) and reinforce my armor, I needed to collect a certain number of materials to craft them. I like that you’re working towards a static goal instead of praying you get a lucky drop; it reminded me of a MOBA in the way that you’re working your way through a character build each match. 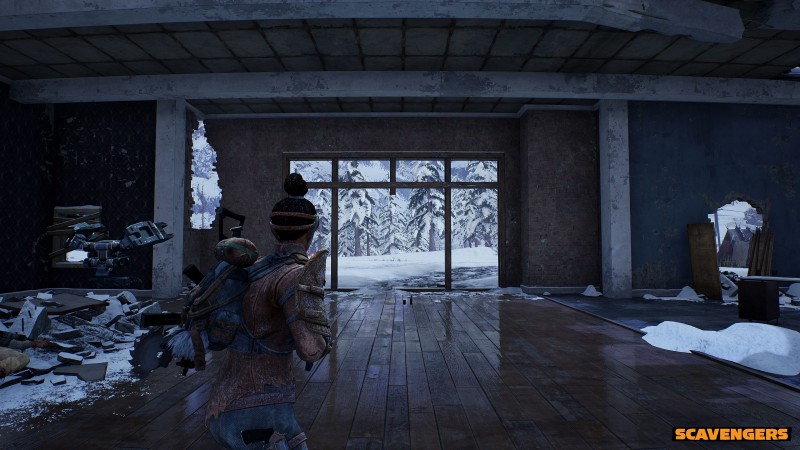 Another aspect of Scavengers that might feel familiar to MOBA fans are encounters with A.I. opponents. Littered across the map are camps of enemy factions, who act as a way to build yourself up before you find and take on human opponents. These encounters are akin to killing creeps in MOBAs; they don’t pose much of a threat, but you need to mow them down if you want to stand a chance against human foes later on. You do have a more solid motivation for attack them, however; these camps usually host the samples you need to collect before Mother will let you back on the ship, so it’s a primary goal.

As a gameplay loop it works, since you slowly start to feel better equipped and ready to take on other players, but fights with A.I. opponents doesn’t reinforce the harsh, survivalist tone the game is going. Some enemies packed more of a punch than others, but I never felt threatened by these foes, who were completely oblivious to obvious flanks and simply stood there as I wailed on them. Enemies don’t seem to react to being shot and don’t put up much of a fight, either, which made working them over and raiding their encampments for supplies feel more like a ritual than a fight. 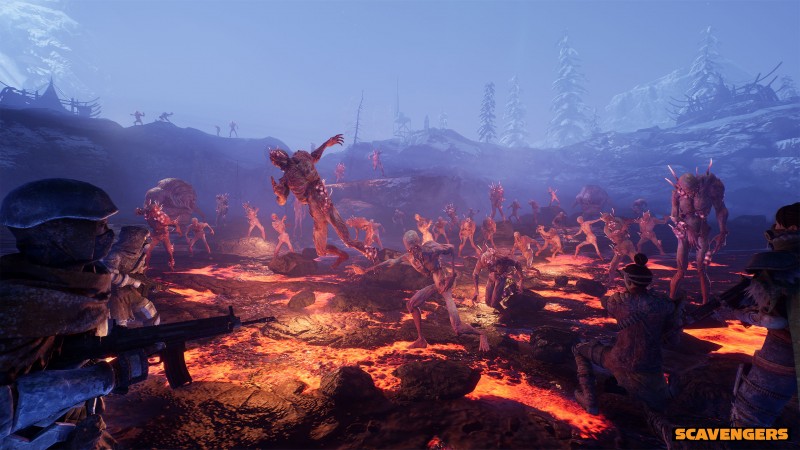 That’s not necessarily a bad thing; neutral enemies in MOBAs work the same way. These fodder enemies also introduce a bit more flair the looting aspect of a battle royale game. Considering there’s only a handful of squads on the field, they liven up matches, too. I just wish these encounters were more interesting; the gunplay is functional, but not all that exciting on its own.

Fights with human foes are different story. Our team didn’t have a real encounter with another squad up until the very end of our match, after we’d collected all the samples and Mother had sent down the dropship and a powerful storm began to roll in. They came at us as we were clearing out an A.I. hideout and the storm came in from the direction of the dropship. Pincered, we decided to stand our ground atop a hill a few feet away from the camp. The high ground didn’t give us the protection we might have wanted, however, and we wound up backed into a corner and wiped out.

We could have made our way to the dropship instead, however, and I’m curious about how the match would have turned out had we made a run for it. But because our confrontation came at the end of our match, with a storm barreling down on us, the tension and stakes were high, so I didn’t get a good sense of how Scavengers might let you engage with other players beyond combat. It’s hard to know if things might have been different if we’d encountered another squad earlier on, but I still think it’ll be hard for most players to get over their shoot-on-sight instincts, and I never felt the motivation to do so.

Still, Scavengers offers enough deviations from what we’ve come to know about battle royale games that, despite some rough edges and some lingering questions about whether this setup can deliver on its promises to offer something new in the multiplayer arena I’m intrigued by what it has to offer. There are some fun ideas at work here, and with a playtest rolling out this year before the title properly releases in 2020, there’s plenty of time for Midwinter to iron out the kinks and mold the game into something unique.