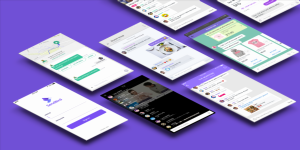 Sendbird, a platform that companies such as ServiceNow, Reddit, and Korea Telecom use to embed voice, video, and messaging features into their apps, has updated its application programming interface (API) to support group calls. The launch comes just weeks after the San Mateo-based company announced a fresh $100 million in funding at a $1.05 billion valuation.

Founded in 2013, Sendbird had mostly focused on offering a chat and messaging API to developers, powering core in-app communication services for major consumer and enterprise brands around the world. But last March, Sendbird added a voice and video API to the mix, at a time when communication apps such as Zoom and Houseparty were enjoying a massive spike in popularity due to the global pandemic.

Fast-forward 14 months, and the latest darling in the digital communications space is Clubhouse, an iOS app that accommodates group voice conversations for up to 5,000 people. And that, essentially, is what Sendbird is bringing to all developers with its latest API, though with the added benefit of video thrown in for good measure.

In truth, most of the major messaging apps have embraced group video and voice calls for years, including Facebook, WhatsApp, Skype, and even Slack. But with countless industries undergoing major digital transformation, the need to build similar tools into their own apps is greater now than it has ever been — this is perhaps most evident in the medical realm, which has seen an explosion of telehealth technologies over the past year.

Existing Sendbird customer Teladoc, a leader in the telemedicine sphere, has seen its valuation double through the pandemic, and now with group video and voice calls, the company will be able to support participants spread across multiple locations on the same call. This could be particularly important for when different health care professionals are involved with a patient.

At launch, Sendbird’s group voice calls support up to 25 people, while video group calls are limited to six participants.