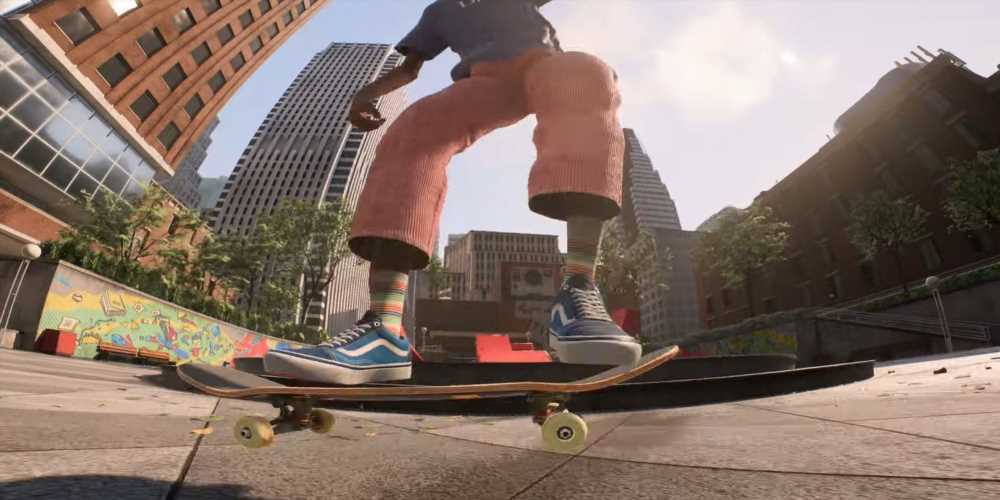 Skate 4 has a new trailer that looks a lot like the leaked pre-alpha footage from months ago–at least to start. The first few moments of the trailer show some pretty gnarly wipeouts from some untextured mannequins, along with a few weird bugs and crashes. EA admits that it’s "still working on" Skate 4 and what we see is "pre-pre-pre alpha" footage.

But there's also reason to get excited by this trailer. For starters, EA confirmed another leak from months ago that said players would be able to create their own skateparks. The trailer shows a massive vertical wall that looks like it’s for rock climbing, but it’s actually for skaters to test their mettle and hopefully avoid free-falling to their deaths (thankfully, injury seems impossible in this latest iteration of Skate).

We also got to see plenty of kickflips, rail grinds, and more intricate tricks as suddenly the trailer shows a vibrant skatepark with real lighting and textures. Players could also forego their skateboard entirely as one is seen parkouring on a wall while another leaps across bars on a jungle gym.

"We told you we’re back, and we’re still working on it – but it’s time for you to see what we’ve been up to," wrote EA in the trailer description. "It’s still early, but we want to get this right and that means we want you to be a part of it."

EA is putting out a call for "insiders" to "help shape the future of Skate." Insiders will be able to play early versions of the game in scheduled playtests and provide feedback directly to the developers. These will be closed tests, and the FAQ page confirms that insiders won’t be able to share images, video, or stream these playtests–at least to start. The rules will likely change as the game gets closer to release and EA finds it beneficial to start generating some real hype.

Insiders must be 18+ and there’s no guarantee you’ll be invited to playtest. You can sign up to be an insider here. Skate's next closed playtest is scheduled for July 5, so sign up now for your chance to get in.