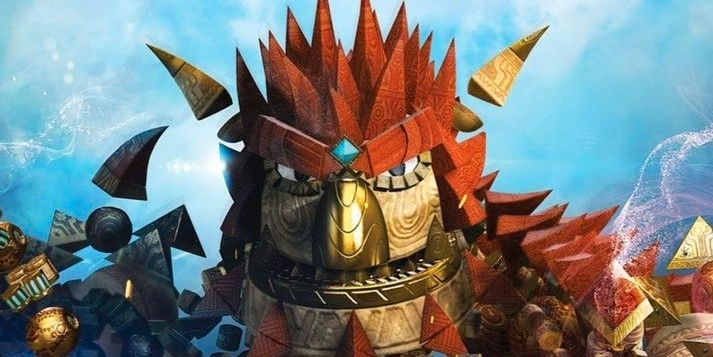 You probably thought you were pretty funny with all those Knack 3 jokes, didn't you? The Knack mockery creeps out of its dark little corner every time a new State of Play is lined up, or Sony has some big announcement to make. Well, I hope you're happy, because Sony Interactive Entertainment has filed a trademark for 'Knack' in Japan. You just couldn't let sleeping dogs lie, could you?

The trademark filing, which was spotted by Gematsu, was filed on March 19 in Japan, but was only made public today. While the filing is just for the word 'Knack' we don't currently know if Sony has filed this in hopes of a continuation of the series, a complete reboot, or something entirely different. The category it has been filed under is 'machinery and equipment', which may sound odd, but is usually the category video games are filed under.

The original developer of the Knack series was Japan Studio, which also worked on titles like Ape Escape and Gravity Rush. However, after being acquired by Sony, the studio was essentially merged with Team Asobi. All mention Japan Studio was taken off Sony's websites and platforms, and was replaced by Team Asobi. If there is to be another game in the Knackiverse, it's probably a safe bet that Asobi will be working on it with former members of the Japan Studio team.

However, in September last year, there was a rumour that Sony was setting up a new triple-A game studio in Japan. The rumour suggested that "apparently Sony is in the process of building an entirely new studio in Japan to work on big-budget AAA games. Essentially this studio is in the same vein as Microsoft "Initiative", and apparently, Sony wants this studio to make big hits that are both successful in Japan as well as in the West." The source of the rumour was the same one that posted about the Housemarque acquisition before it was formally announced.

However, nothing has come of that rumour as of yet. So, unless Sony reveals a new studio along with a new Knack game, we can safely assume Asobi might work on it.