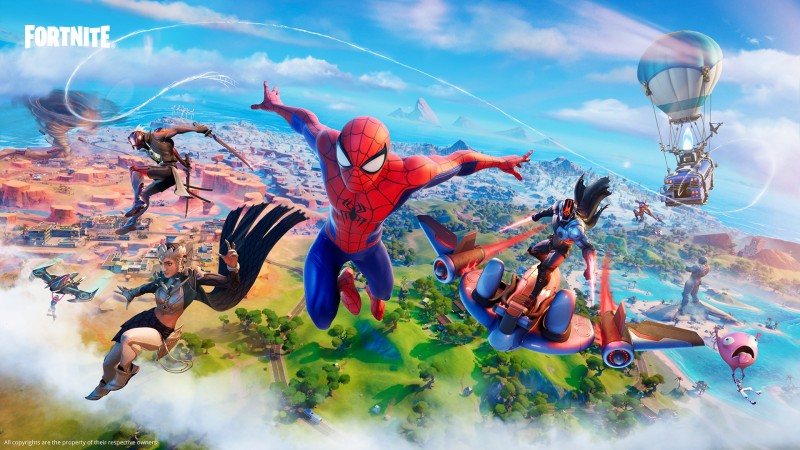 Fortnite changes faster and more dynamically than any other ongoing game. Yesterday’s epic finale to the two-year-long Chapter 2 event was again met with a radical shakeup to Fortnite’s core gameplay formula. For the start of Chapter 3 – which begins today – developer Epic Games introduces a new gameplay movement through a character who knows it better than anyone.

Spider-Man is joining the Battle Royale, and he’s bringing his web-swinging techniques with him. Players can play as the Wall Crawler in three suits: his classic red and blue comic-book look, the white Future Foundation suit, or his symbiotic black alternate. One of the new locations on the redesigned map is the Daily Bugle, a tall building that should hold a few Spider-Man easter eggs for fans.

Every character in the game can now swing across the environment just like Spidey. They can also slide. This is another new movement that can bring you closer to flat ground for strategic attacks and make you glide down hills at an accelerated speed. New weapons and items are also a part of the mix, but we’ll have to wait until we get our hands on the game to see what awaits us.

Epic Games says this new Fortnite era will introduce camps, where players can store items and heal up if they don’t have any supplies. You may want to hunker down at the home base when unexpected weather conditions hit – yet another new addition in this chapter. How will snipers perform during a rainstorm?

If you frequently win Battle Royale matches, you have a chance of earning a Victory Crown. You’ll have to continue being the last person or group standing to keep the Crown.

As far as Chapter 3’s story goes, all we know at this point is The Foundation is here. Famed actor Dwayne Johnson voices this mysterious character. And just like Chapter 2’s story, it would appear this new one will be crammed to capacity with licensed cameos. Along with the wall-crawler, players can look forward to suiting up as Gears of War’s Marcus Fenix and Kait Diaz.

We’ll have more on Chapter 3 in the days ahead. To all of you Fortnite fans out there, have fun checking out the new content! Here’s hoping we aren’t left drifting at sea for long. As of this writing, the game is unplayable as we wait for Chapter 3 to begin.