Both seasons of Netflix’s Stranger Things have used Dungeons & Dragons to frame its major plot points. Now the streaming giant is returning the favor through a novel collaboration with the team at Hasbro Gaming. The Stranger Things Dungeons & Dragons Roleplaying Game Starter Set is an introductory boxed set that includes an adventure based on the show. But don’t mistake it for a simple television tie-in. While light on actual content, this little red box is one of the best introductions to modern tabletop RPGs around.

When D&D’s 5th edition landed in 2014, die-hard fans were all over it, snapping up the three basic manuals — the Player’s Handbook, the Dungeon Masters’ Guide, and the Monster Manual — in huge numbers. In fact, as I write this article the Player’s Handbook is still ranked #50 on the Amazon Best-sellers list nearly five years after its first printing.

The trouble is that these three books, and the original 5th edition Starter Set that accompanied them, are steeped in the modern D&D lore. That’s fine for folks getting back into RPGs after some time away, but for those that are truly new to the hobby, the Forgotten Realms as they’re called can be a bit overwhelming. Rookie Dungeon Masters (DMs) especially don’t need things like full-color maps of entire regions and pages of lore about its people. All they need is a hook.

Stranger Things provides exactly that, but not much more.

A beginner’s guide to playing Dungeons and Dragons

Inside the box you’ll find five pre-generated characters, one each for the five members of the party as described in Stranger Things Season 2. Fans can step into the shoes of Mike’s paladin, Will’s cleric, Lucas’ ranger, Dustin’s bard, and Eleven’s wizard. Best of all, these are all level-three characters, with plenty of bells and whistles from the 5th edition of D&D.

The real treasure here is the adventure itself, based on the one the gang played briefly during Season 1, called Hunt for the Thessalhydra. It’s extremely light on lore, and focuses on getting players out in the field and exploring for clues. Guidance for the DM is delightfully open ended, with plenty of room for interpretation. Unlike Lost Mine of Phandelver — the adventure that shipped with the original 5th edition Starter Set — it encourages DMs to improvise and explain the world in their own words.

By not focusing players down too narrow of a path too early, this boxed set creates the expectation that D&D can be a collaborative process. In motion, Hunt for the Thessalhydra is an open-ended experience moderated by the DM, not merely a relentless search for the next McGuffin. 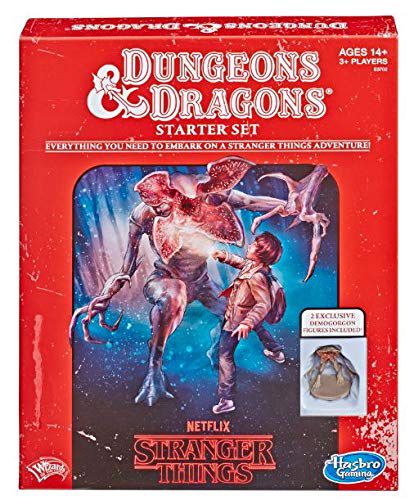 Be warned, however, that the adventure itself is painfully brief. There’s barely enough here to fill a long evening at the table. Where Lost Mine of Phandelver takes players from first all the way to and through fifth level, this adventure starts at third level and ends at fourth. That means there’s only a handful of actual encounters and, while they’re playful and excellent for beginners, seasoned role-players are likely to be disappointed with the amount of content on offer.

Another slight downside is the price point. While the original Starter Set now retails for $17.99, the Stranger Things version will set you back a bit more at $24.99. As a bonus it includes two Demogorgon miniatures, but those minis are of such low quality that, in my opinion, they’re hardly worth the up-charge. Both are made from a tan, springy plastic that makes them extremely durable. But only one of them is painted, and poorly at that. Given the elasticity of the material, I’m not entirely sure how to even go about painting the other one. If anything they make for decent desktop tchotchkes.