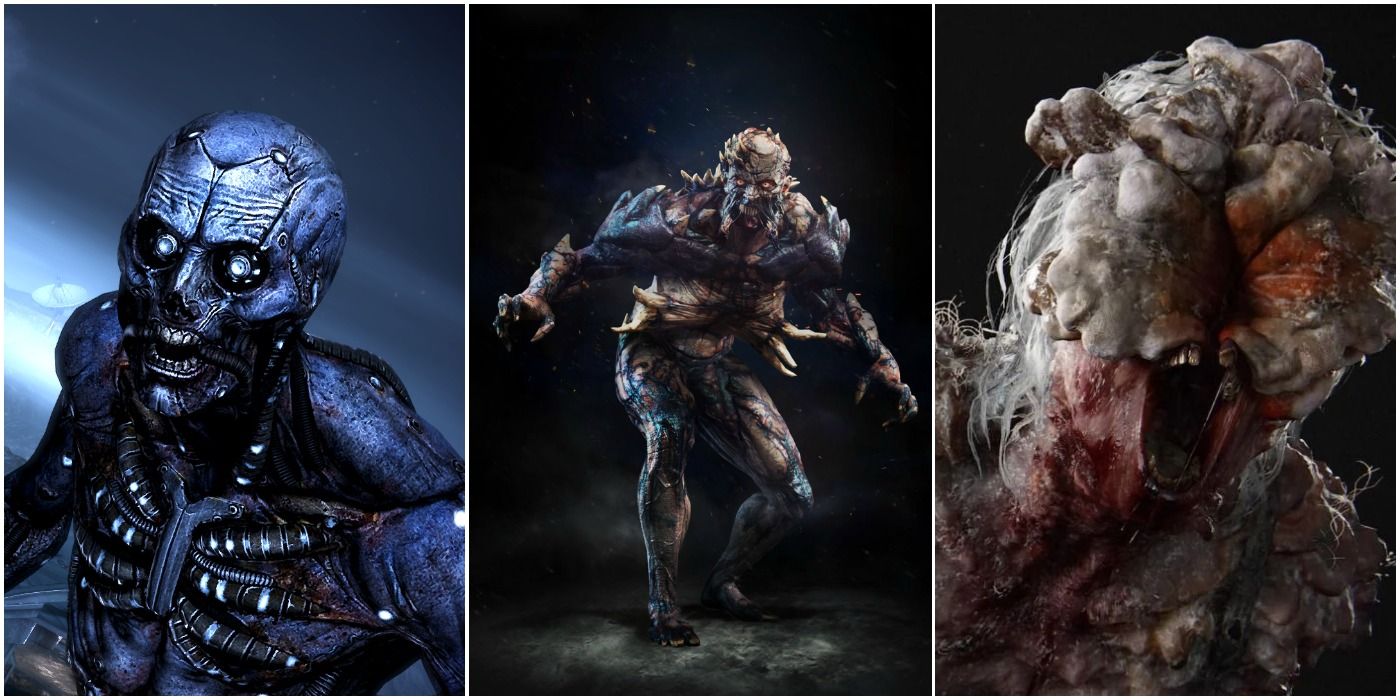 If you’ve played video games for more than a few minutes, you’ve probably encountered some kind of zombie. A reliable staple of the medium, they show up just about everywhere from fantasy to horror, and in a hundred different flavors. Fast, slow, smart, dumb — no matter what you’re looking for, video games have a type of zombie just waiting to chomp down on you — or shoot you, sometimes.

But what is the most dangerous type of zombie? Which variants of the undead are the hardest to kill, toughest to survive, and best at spreading their infection of choice? There’s a whole world of nasties to choose from, but only a chosen few can make the top 10. 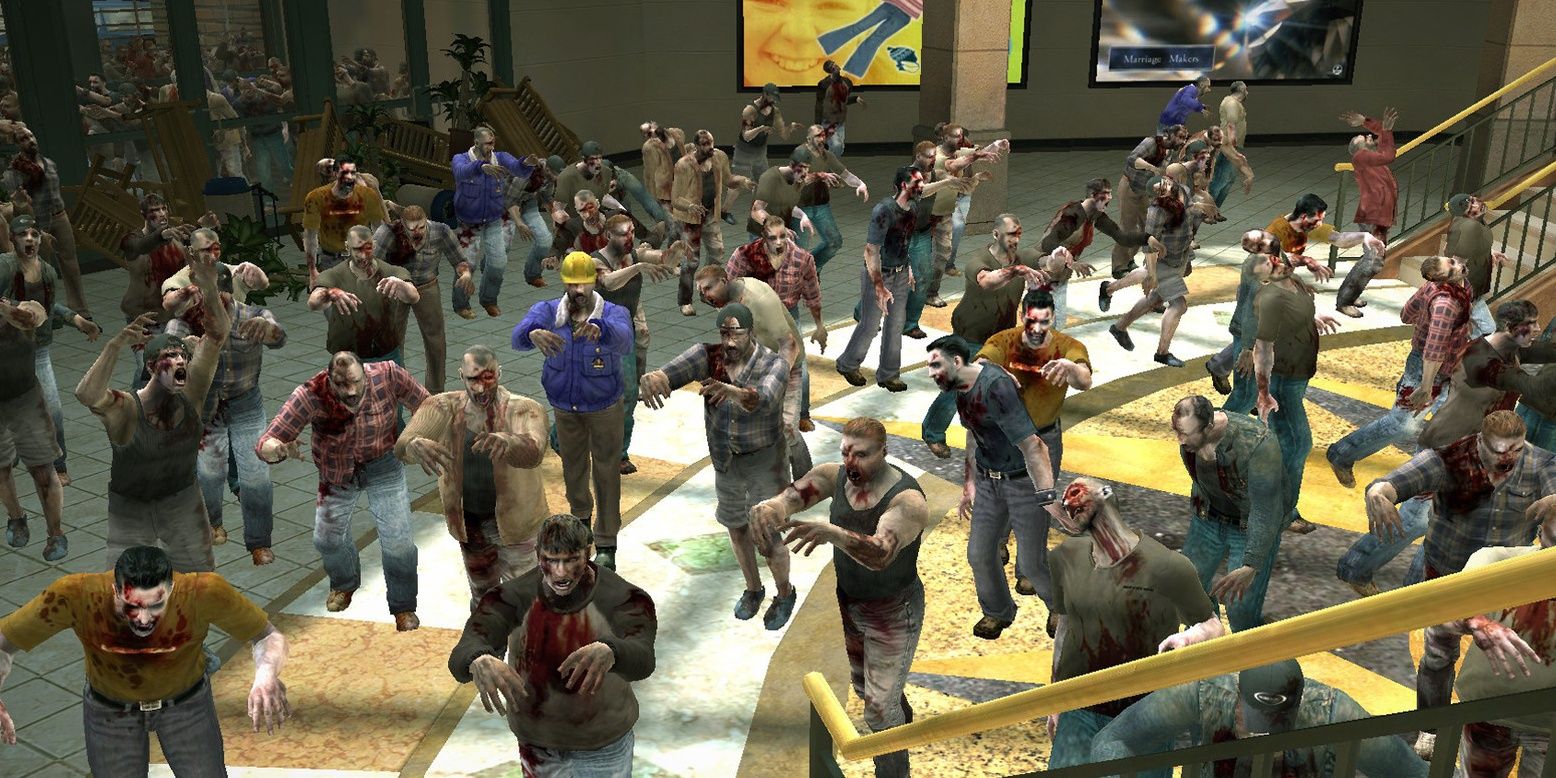 By night, these zombies get a boost: they become superhumanly strong and much more aggressive. Even by day, wounds inflicted by them won’t clot or heal unless you’re immune. It’s death by a thousand cuts, which is bad news given there are tens of thousands of them. The infection took down Willamette, a town of over 50,000, in under 72 hours. They’re definitely more dangerous than a first glance might suggest, but their speed and overall stupidity keep them low on the rankings. Just keep jogging and you’ll be fine. 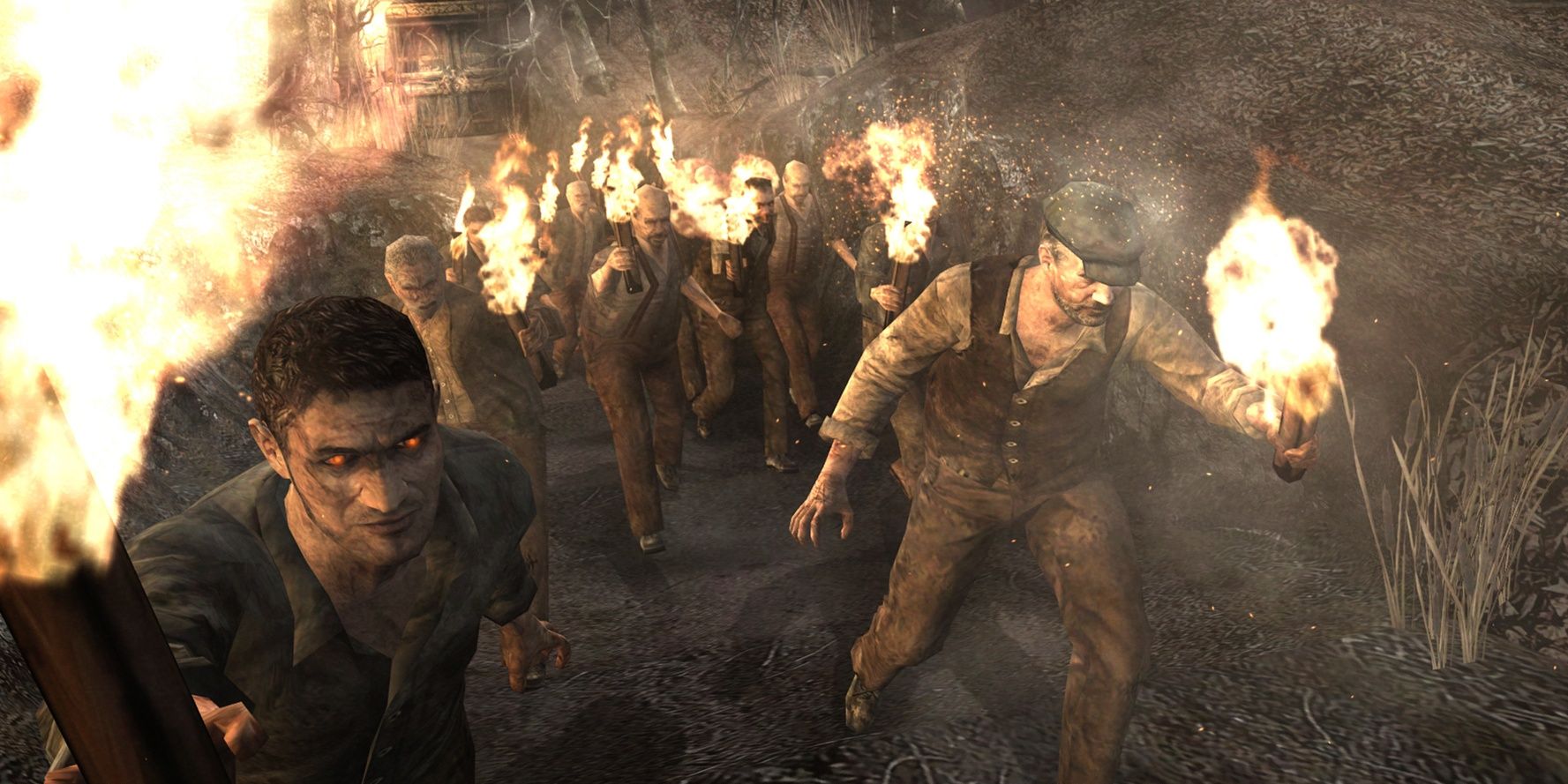 Whilst the newer Resident Evil games have pivoted more toward monsters and mutants, the Ganados show that you can still have your undead parasite cake and get eaten by it too. Victims of the Plaga parasite, the Ganados have far less infectivity than others on this list as they don’t spread via particles or bites. But compared to their T-Virus cousins, these undead are regular Einsteins.

Ganados can use tools, crossbows, and even heavy guns, and regularly show the ability to speak. They’re also highly mutative — shoot them in the head and you might get a nasty, tentacle-shaped surprise whipping at you for your trouble. Their limited virality and comparative squishiness compared to others on this list keeps them low on the ranking, but the Ganados will still make you think twice about that Spanish vacation. 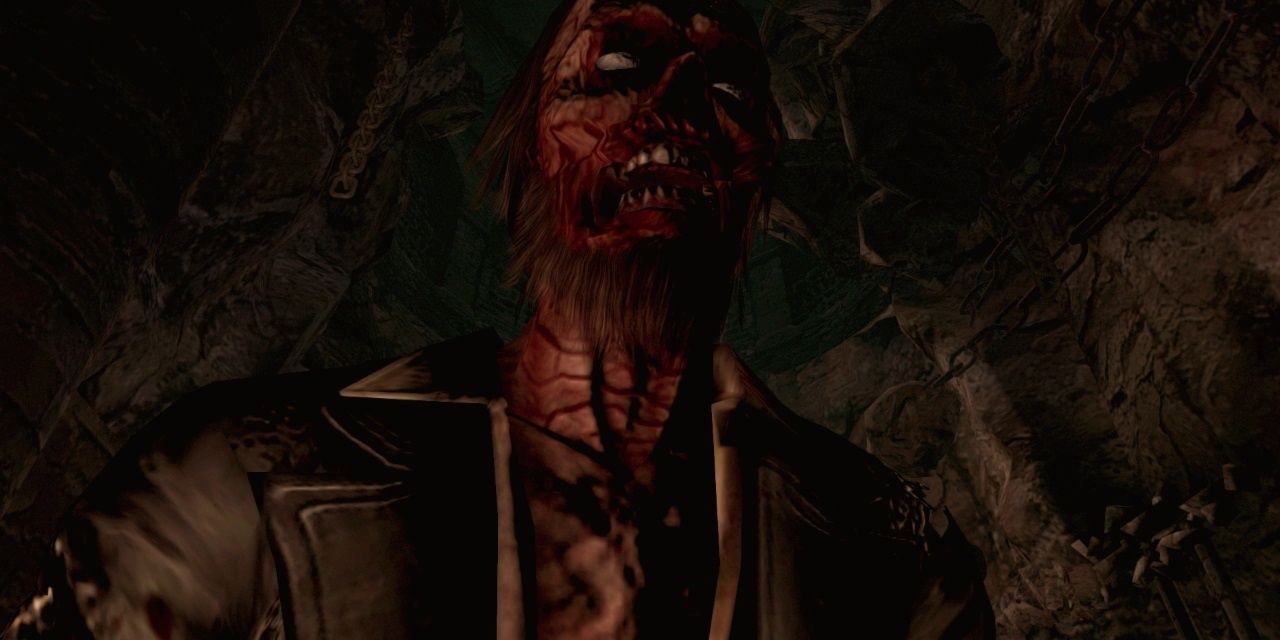 The classic videogame zombie, T-Virus zombies hit the scene in 1996’s Resident Evil and have been scaring players ever since. For the most part, they’re slow and dumb, but the real danger lies in their toughness and infectiousness. A single bite or scratch from a T-Zombie is enough to seal your fate, spreading the virus like wildfire. Just look at Raccoon City.

And although they’re slow targets, T-Zombies can take a beating. They can shrug off shotgun blasts to the torso, some even plowing through multiple headshots. If you don’t set them on fire when you’re done, they’ll come back a second time as fast-moving nightmares called Crimson Heads. They might not be the most dangerous undead on this list, but T-Virus zombies are still some of the most deadly zombies out there after shambling around for 25 years. 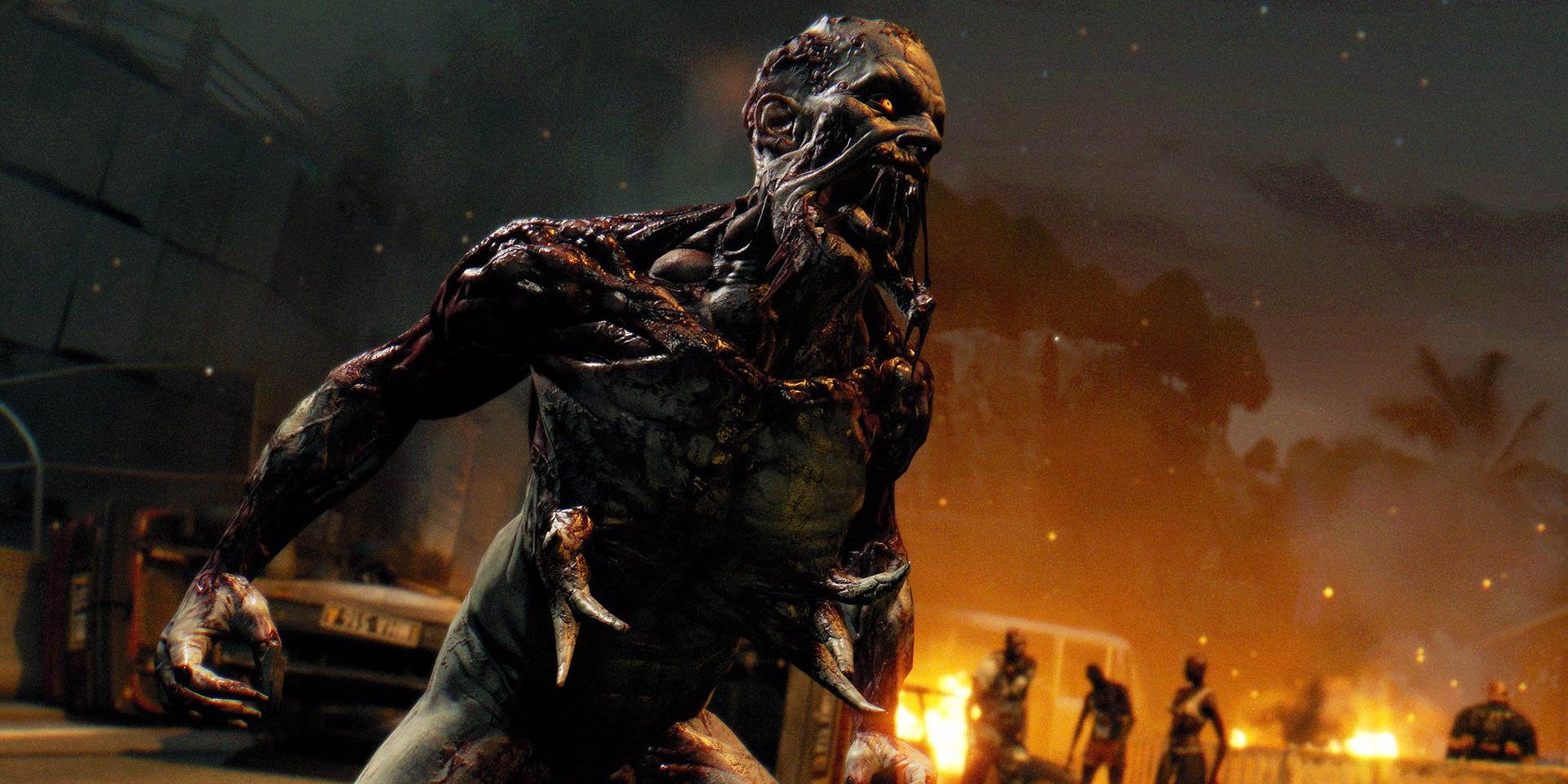 The hellspawn of a zombie and a parkour expert, there’s absolutely no escaping Dying Light’s Volatiles. These guys are the fastest and most agile zombie on this list, able to scale walls and leap over obstacles like nothing. They can also soak up damage like nobody’s business, and they’re almost totally immune to falling from heights. Think you’re safe at range? Think again. Volatiles can spit deadly acid if they can’t reach you.

However, Volatiles have one huge weakness that stops them climbing up the ranking: they’re incredibly sensitive to UV radiation. The moment the sun comes out, they’ll ignore their prey until they’ve gotten into the shade, and a special flashlight is enough to momentarily drive them off. The Volatiles are a nightmare made real, but only for about 12 hours a day. 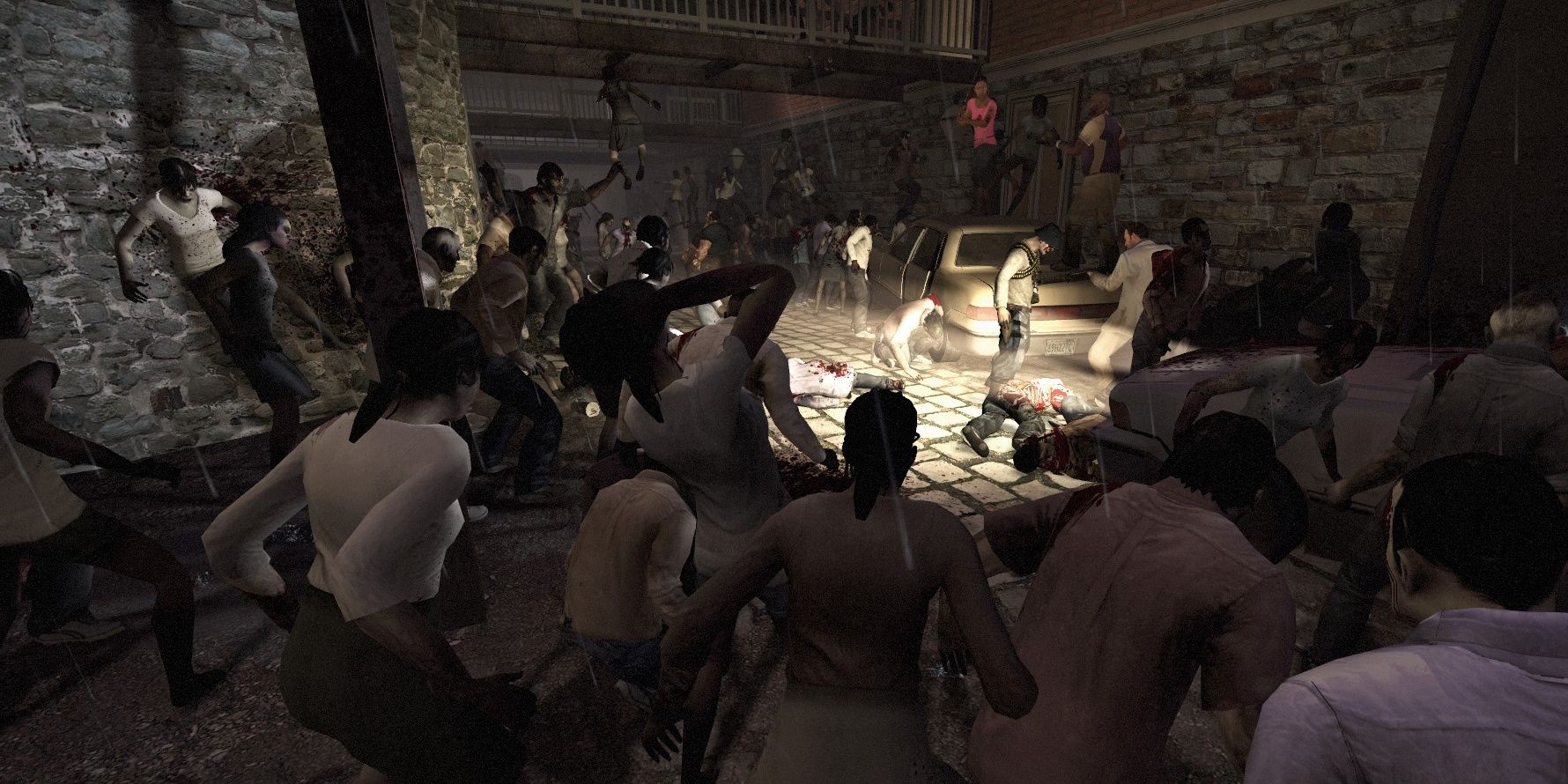 The bane of co-op gamers everywhere, Left 4 Dead’s Infected are victims of a virulent rabies-like disease called Green Flu. The highly contagious virus is an apocalypse-level event, meaning that there are even more of these guys than their Dead Rising or Resident Evil counterparts — and they are fast.

The Infected run in packs at full sprint, although most of them can’t stand up to sustained gunfire even if it’s not a headshot. However, special variants ratchet up their danger level: from nigh-unkillable Tanks to exploding Bloaters, The Infected have a variety of ways to ruin your day. Most of them might not be tough or particularly smart, but unless you have a lot of ammunition, you might as well just get down and pray for a helicopter.

5 The Undead – Plants Vs Zombies 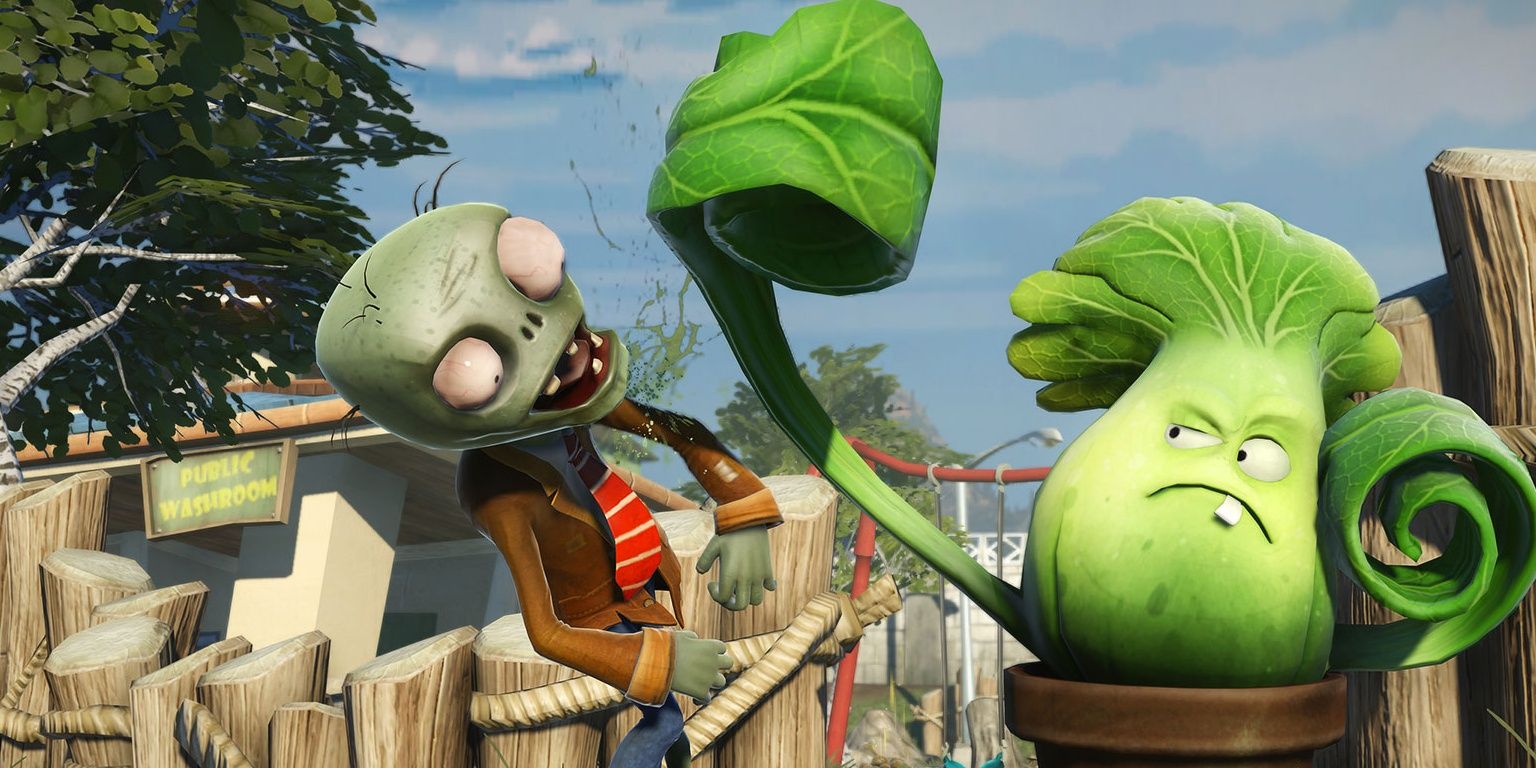 In a list populated with dystopian hellscapes, nightmare scenarios, and gory horror, you’d think the top five would start with something gritty right? Wrong. The Undead from Plants vs Zombies are as dangerous as they come, despite being technicolor cartoons. These reanimated rascals are smart.

They can plan, defend themselves, and even use complicated tools. In their quest to eat human brains they’ll go pole vaulting, dig mines, and even tame dolphins to get what they want. Some of them are gigantic brutes, and others can even pilot giant mech suits. Additionally, because they’re reanimated corpses rather than infected living people, there are billions of them waiting in graveyards to swell their ranks. They might be even higher if not for a specific weakness to weaponized seeds and corn cobs.

4 Cordyceps Zombies – The Last of Us 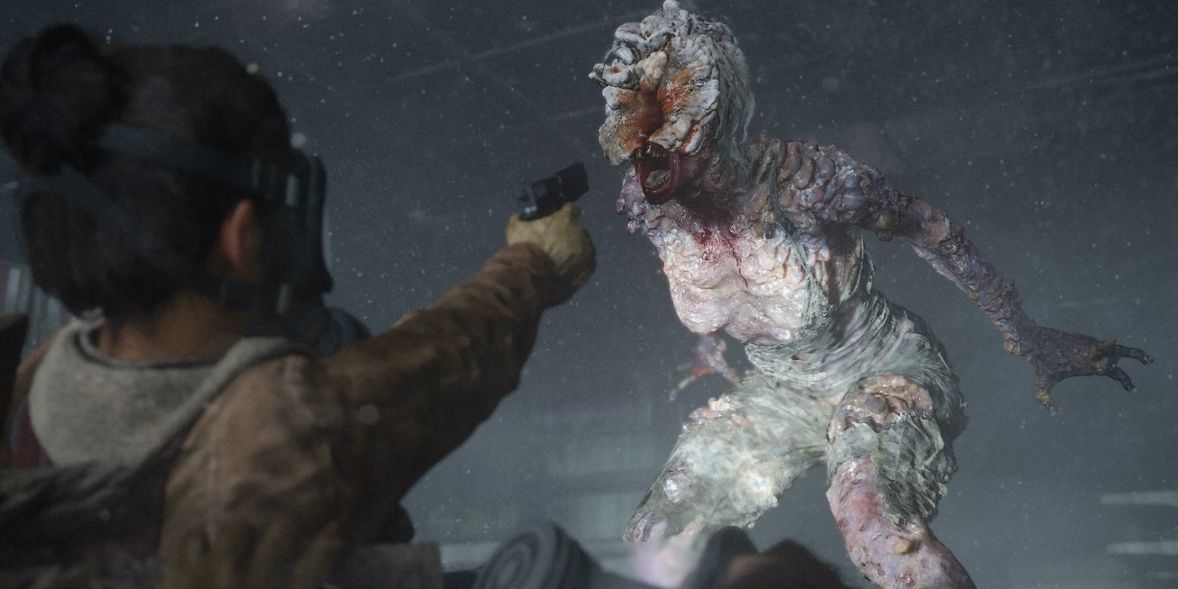 Victims of a deadly fungal sickness named Cordyceps Brain Infection, these mushroom monsters come in several flavors, each more horrible than the last. This includes the spore-spewing Shamblers, highly armored Bloaters, and the horrifically creepy Clickers. Like many on this list, they’re fast and highly aggressive, and the longer they’re active, the tougher and more bullet resistant they get.

Many Cordyceps Zombies use echolocation to hunt down their prey, particularly Clickers, meaning even if you can’t see them, they can see you. CBI is highly infectious and spreads on the air through spores, so they’ve got numbers on their side in a big way too. Their main weakness is fire, but good luck getting one going when fifty of these suckers are bearing down on you in a pitch-black room. Fungal, definitely, but fun? Anything but. 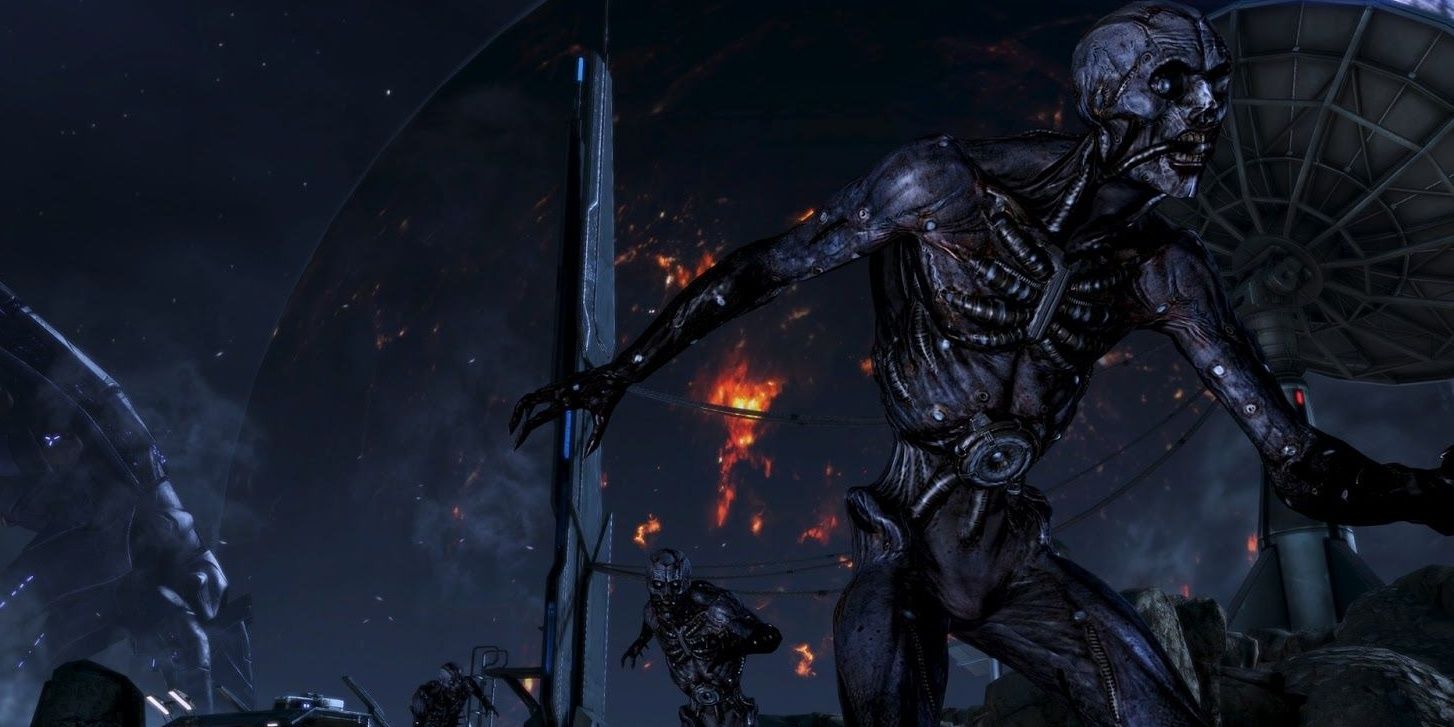 Appearing in Bioware’s Mass Effect series, these horrifying robo-zombies are the results of dead bodies being reworked into cybernetic undeath by Reaper nanotechnology. Each alien species produces different variants, from the speedy Human Husks to armored regenerating Cannibals and the psionically-powered Asari Banshees. Every single one is bad news.

At the beginning of a Reaper invasion, you can expect thousands of Husks with more on the way. They can shoot from afar, crawl up the walls into your shelter or just blow you to pieces with their minds depending on how unlucky you are. Even worse, they are all psychically connected to their Reaper masters, allowing them to take up sophisticated attack tactics. Their flexibility and tactical ability make them some of the most deadly zombies in the universe. 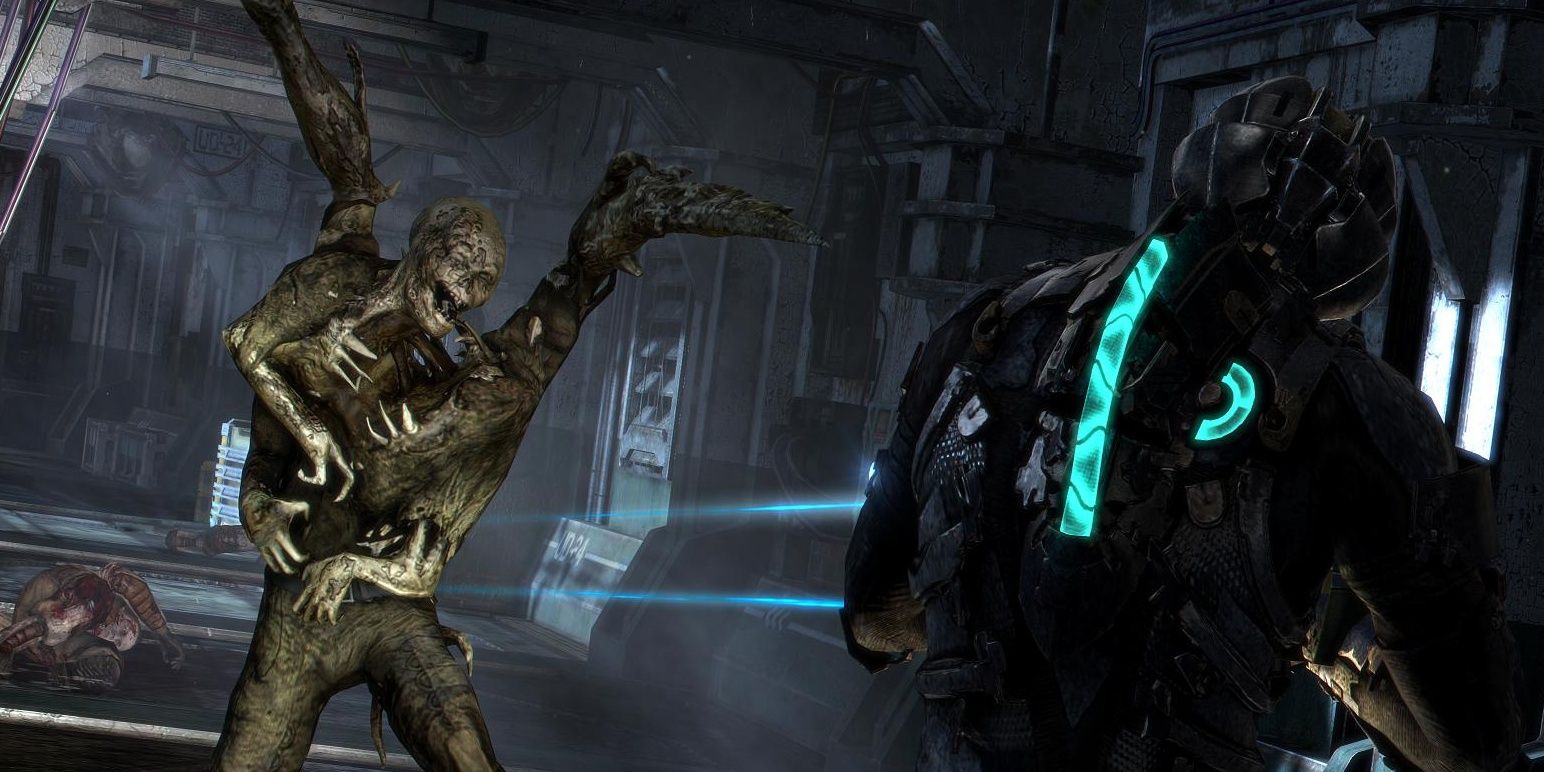 A decidedly meaty flavor of space zombie, Necromorphs have been terrorizing players since their first appearance in 2008’s Dead Space. The Necromorphs spread via pathogen and convert their dead hosts faster than any other zombie on this list. This means their numbers swell incredibly quickly, as seen in Dead Space 2 when they overwhelm an entire city in a single night.

A lone Necromorph is nothing to scoff at, either. They boast teeth and claws that cut armor and flesh like butter, as well as excellent mobility. Additionally, it takes more than a simple headshot to take these mutants down: complete dismemberment is your only option. If that wasn’t bad enough, they can also combine into giant fleshy masses that are almost impervious to normal weapons. It doesn’t get much worse than Necromorphs, except for the top spot. 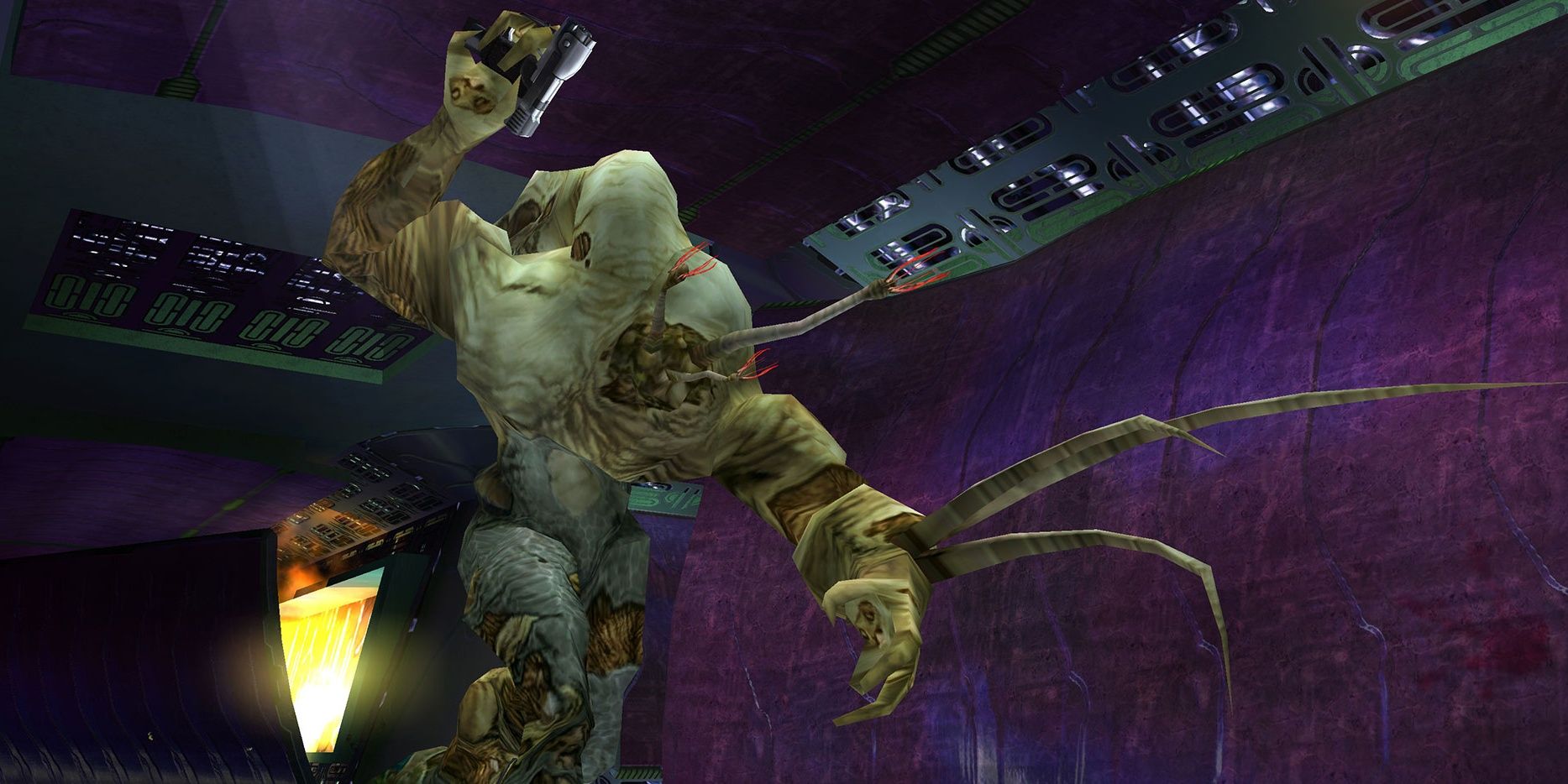 The top spot. The cream of the crop. The zombies so dangerous that other beings had to invent galaxy-killing weapons just to keep them contained. Halo’s Flood is a parasitic superorganism that infects and conquers entire worlds at a time, turning the inhabitants into troops while assimilating their intelligence.

The highly contagious Flood parasite overwhelms entire space stations in mere hours, and its zombies retain the muscle memory necessary to use advanced weaponry. Flood Zombies are highly mobile, insanely strong, and can utilize the armor and defenses they used in life. In short, they’re an absolute nightmare to fight. There’s no cure for the Flood infection and natural immunity comes at the cost of a fatal nerve disorder. Most zombies are a threat to worlds or even galaxies, but The Flood are a threat to the whole universe.