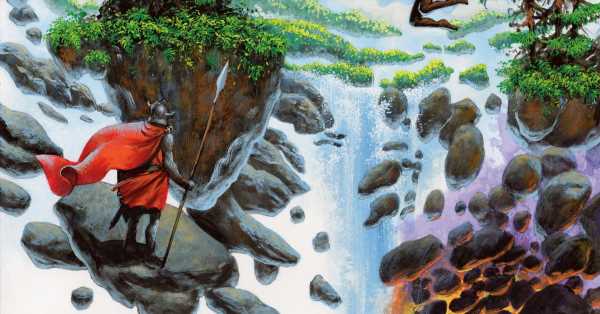 When Wizards of the Coast announced Adventures in the Forgotten Realms, I was initially skeptical. There have been plenty of Magic: The Gathering crossovers going in the other direction — sourcebooks that allow you to create a D&D campaign inside the worlds of Magic. But how do you make a Magic set that plays like D&D? Turns out the original role-playing game is a lot more flexible than I thought, with plenty of tropes and traditions that can be turned in to fun new Magic mechanics.

It wouldn’t be D&D without some dice rolling, and Magic diehards will need to upend their 20-sided spindown counters at least a few times every game. Cards like The Deck of Many Things draw upon the larger lore of the franchise, while also throwing some randomness into the game.

That’s not the only excellent artifact card in AFR. One of the real treasures is the Bag of Holding, which allows you to stash as many cards as you like in exile and then return them all to your hand with a flourish. It’s an excellent application of a famed bit of D&D loot, and should be fun to surprise opponents with in a pinch.

You Meet in a Tavern is a fun little sorcery. For just four mana you can Form a Party — by drawing the top five cards from your library and keeping any of the creatures that you find there. Or, you can just pick a fight. Start a Brawl, the card’s alternate ability, gives every creature you control +2/+2 until the end of the turn.

Grim Wanderer is another card that riffs on the idea of adventurers drawing pints in a tavern. The Goblin Warlock can only be summoned when a creature dies, via its Tragic Backstory ability — naturally.

There’s nothing like a good MacGuffin to set a D&D campaign in motion. The Book of Vile Darkness actually requires three MacGuffins; the Eye of Vecna, the Hand of Vecna, and the Book of Vile Darkness itself. Once you’ve got the right cards in play, simply exile them all to bring forth Vecna, an 8/8 Zombie God with indestructible. As a kicker, it also gains all the triggered abilities of the exiled cards — including the ability to buff those stats based on the number of cards in your hand.

AFR goes to great lengths to tip its cap to some of the most important characters and events in the history of D&D. There’s cards for Drizzt Do’Urden, Tiamat the dragon queen, and for Gary Gygax’s own player character, Modenkainen. But some cards pay homage to the long history of D&D’s formative publications as well. My favorite is a nod to the original Advanced Dungeons & Dragons Player’s Handbook, which featured a pair of adventurers stealing the jeweled eyes from a cursed statue.

You Find a Cursed Idol card shows a party stumbling upon that same statue, still wreathed in spectral flames. They can smash the idol, destroying an artifact in play, or they can lift the curse, destroying a target enchantment. Or they can steal the eyes, which will yield treasure and allow them to “venture into the dungeon” — a new mechanic which actually brings dungeon-delving into the original collectible card game for the first time.

Adventures in the Forgotten Realms drops this Thursday for Magic: The Gathering Arena. Pre-release of the physical cards begins on July 16, with the retail launch coming July 23.

Magic: The Gathering Adventures in the Forgotten Realms booster box