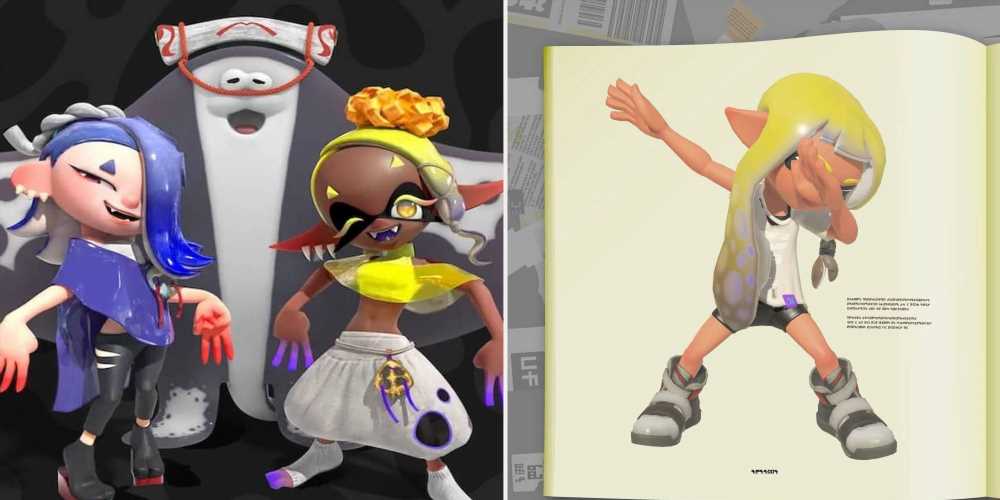 Splatoon 2 was already one of the best games on the Switch, so it is not unreasonable to wonder what Splatoon 3 offers in terms of new content. With a new story and new modes, what could change between these games?

While Splatoon 3 feels like an evolution of what made the previous two games great, it also has a load of new content, features, and changes. Some of these are small and some of them are Big (Man). 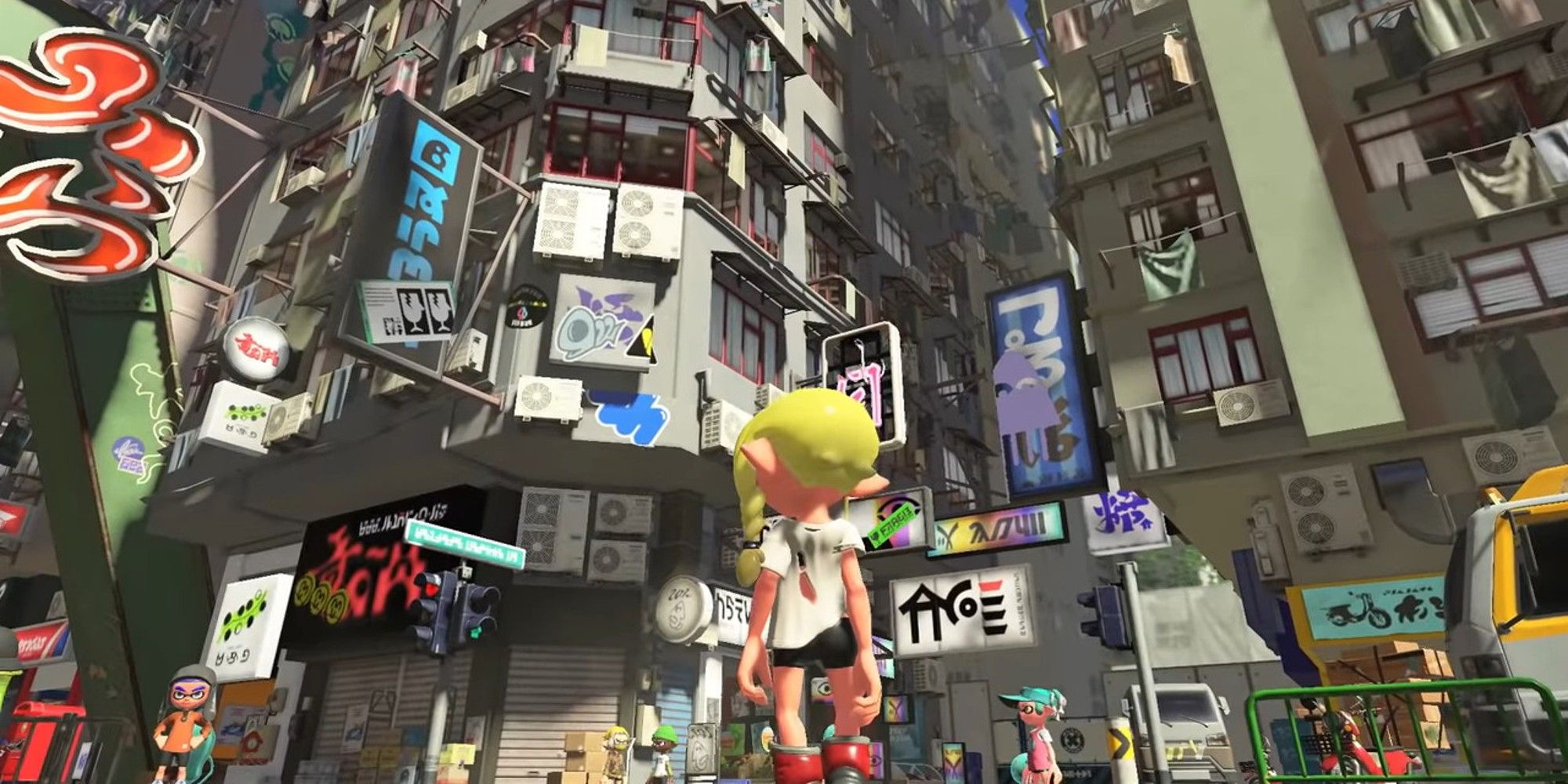 During the previous two Splatoon games, Inkopolis has been the hub of all the fresh goings-on in the world of Splatoon. However, in Splatoon 3 you will travel to the new location of Splatsville.

While the Plaza Square of Inkolopis felt like a metropolitan city's centre, the explorable area of Splatsville feels more like a bustling city's downtown. It hasn't been confirmed, but you pass an upside-down Eiffel Tower-looking stucture on your way to Splatsville – so maybe you are somewhere in the Splatoon future equivalent of France. 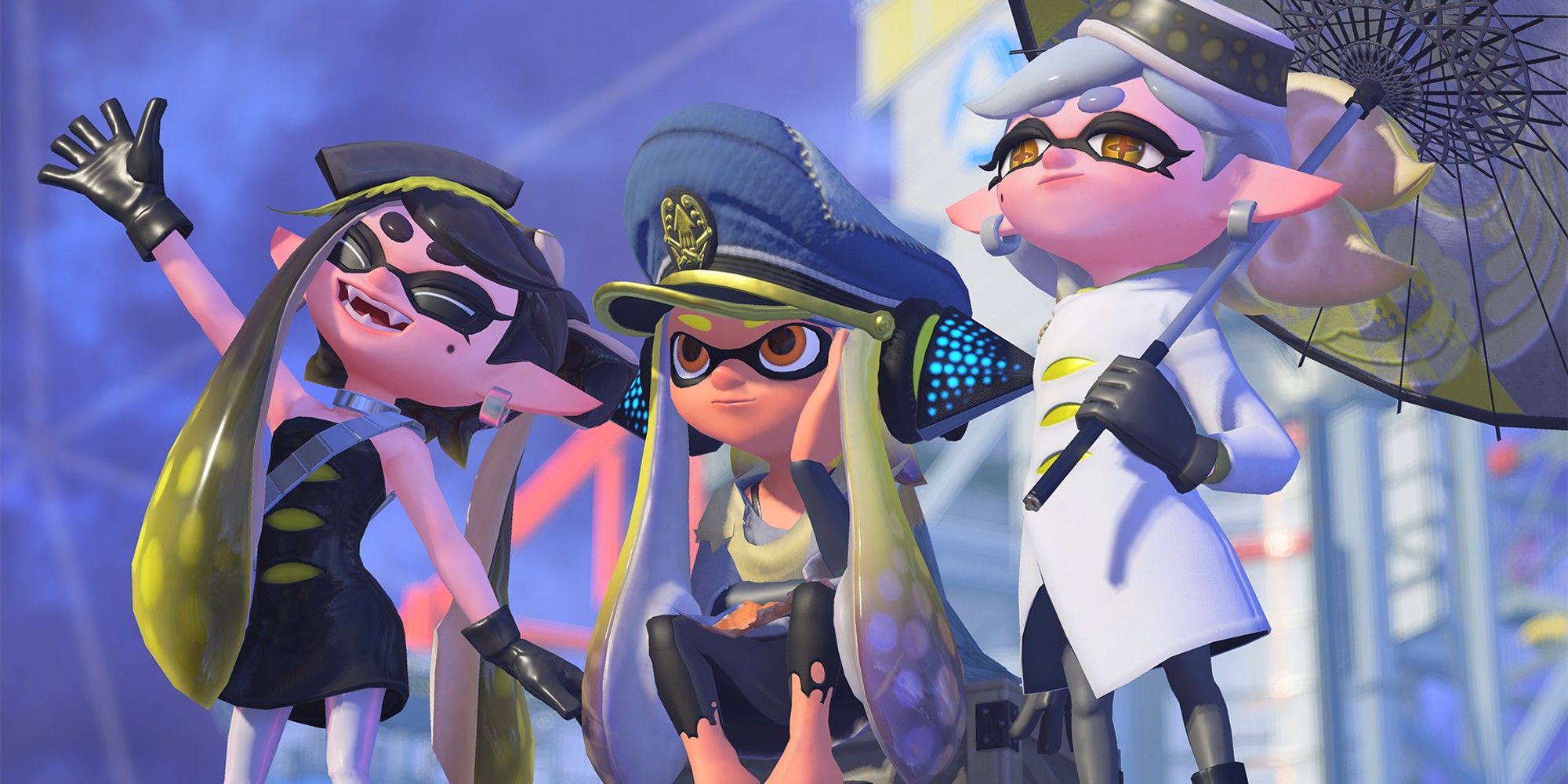 The Octarians are back at it for a third game and have stolen the Great Zapfish that has been powering Splatsville. The story sees the return of fan favourite characters like Marie, Callie, and Cap’n Cuttlefish.

Five years have passed since the events of Splatoon 2, meaning things have changed. There seems to be some sort of infection affecting the Octarians and making them hairy and gross, while characters in the story and hub have all aged. The perk trader Murch is now a teenurchin, and Cap’n is looking fine for 135 years young. 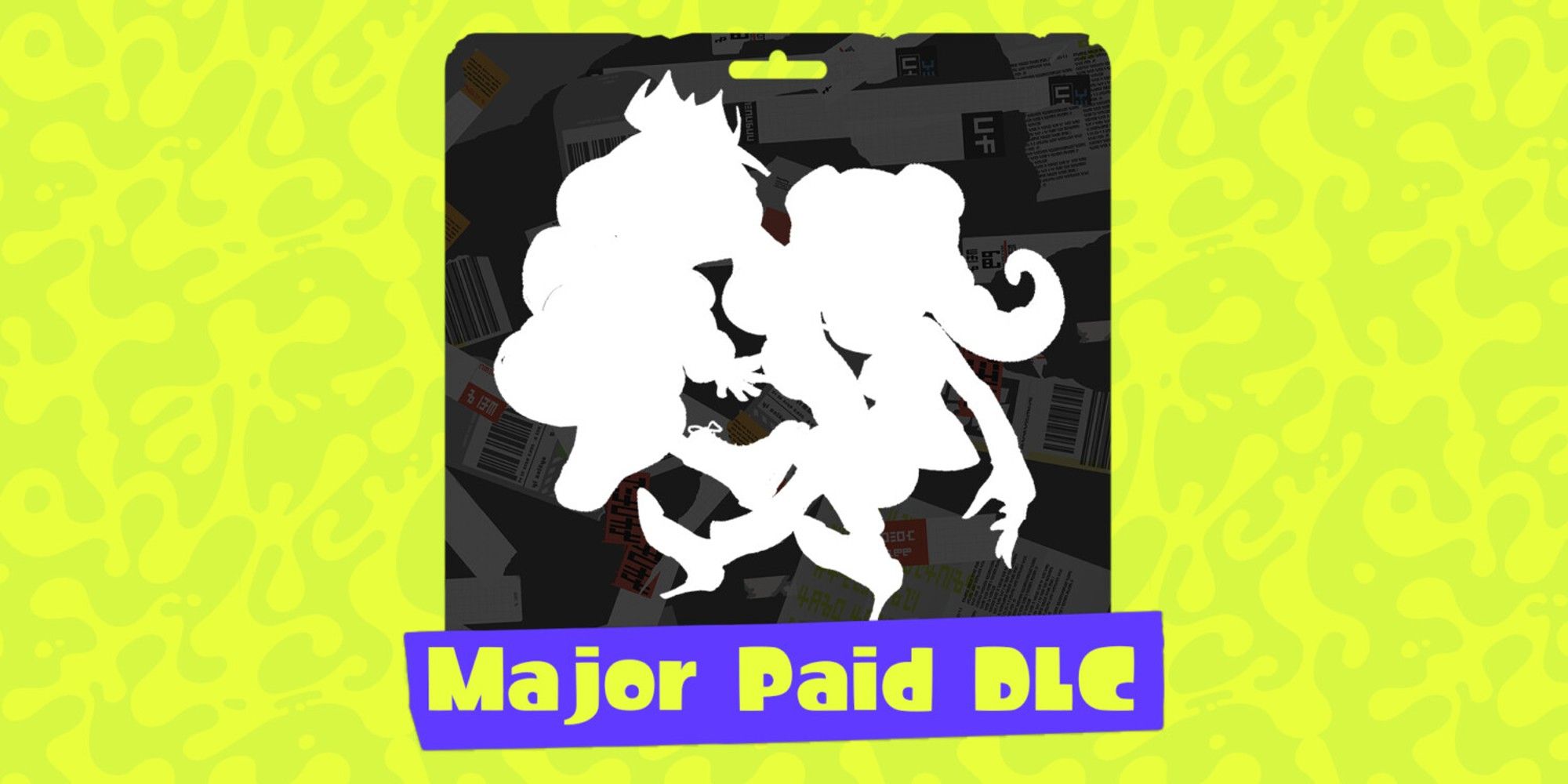 Splatoon 2 was great, but one of the few pain points for fans was how inconsistent updates were and how poor Nintendo’s messaging could be. It was great that Nintendo did add new clothes, maps, modes, and even released the Octo Expansion DLC, but fans never really knew when any of this was coming.

For Splatoon 3 Nintendo has made clear, upfront, that the game will receive a new fashion catalogue every three months, alongside new weapons around the same time. Nintendo has also promised it is working on single player DLC, which considering just how good the Octo Expansion was, is a very exciting prospect. 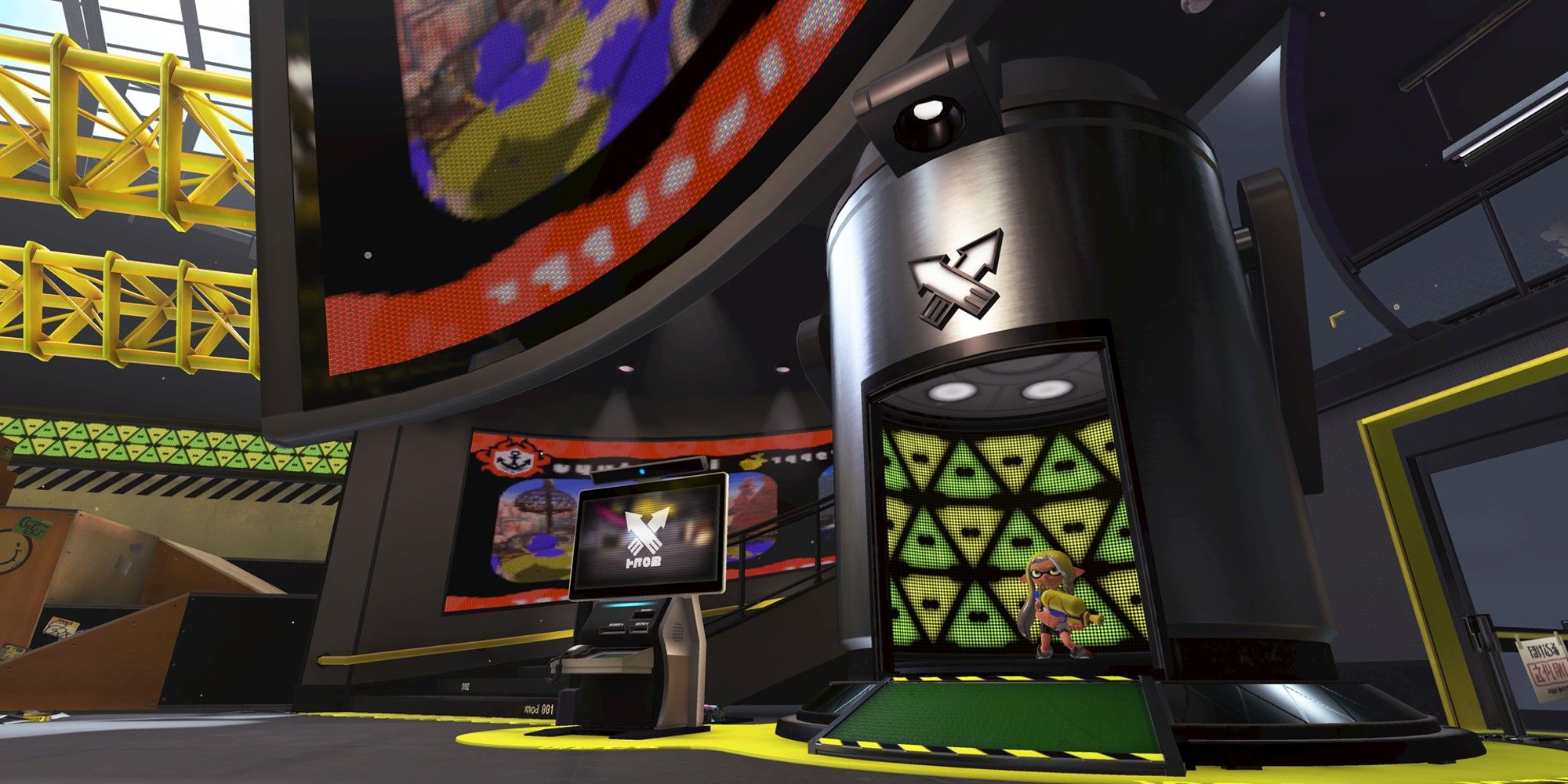 This may sound harsh, but Nintendo has never been good at handling online components of its games or consoles. Whether it is the Switch’s reliance on friend codes and lack of ethernet port, or Splatoon 2’s awkward lobby system. The company has just always struggled with anything involving the internet.

Thankfully, in Splatoon 3’s the lobby is now finally just as intuitive as the multiplayer action. With simple, clean menus, a cool lobby that lets you see ghosts of your online friends, the ability to see other people in your lobby run around in the firing range, it is all great. Best of all compared to Splatoon 2, you don't have to leave a lobby to swap out your gear between games. 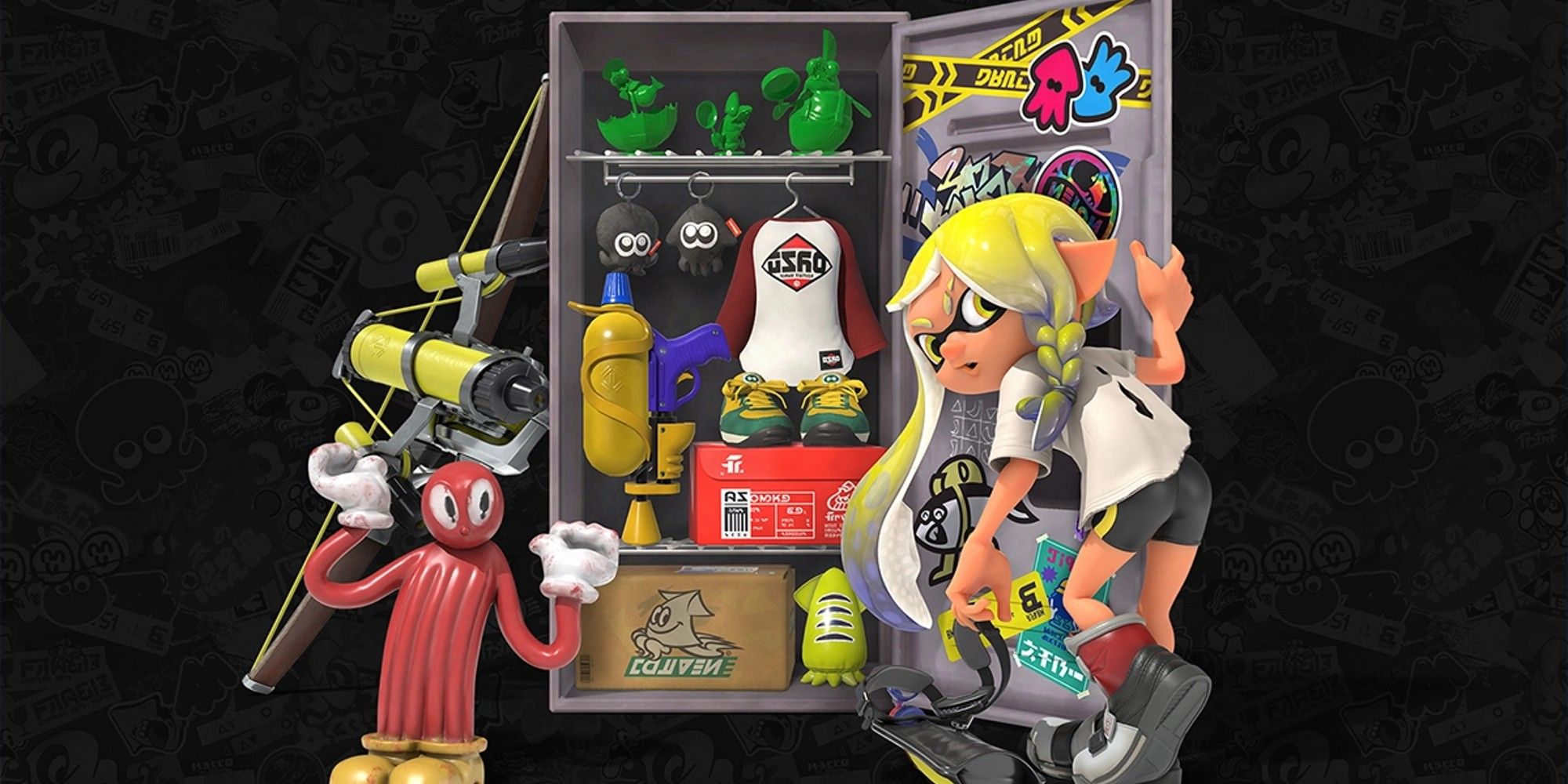 The third Splatoon game takes the series' customization to a whole new level. Of course, there is new clothing for your squid kid to show off but there are also two new forms of customization.

Splashtags, show your name in-game with a fancy banner and even a customisable title, similar to the calling cards in every first person shooter, but more fresh. Lockers are more exciting – at least if you like micromanaging small spaces. Lockers are just what they sound like: a place for squids like you to customise and show off collectables to your friends and recently met players.

6 The Squid Surge And Squid Roll 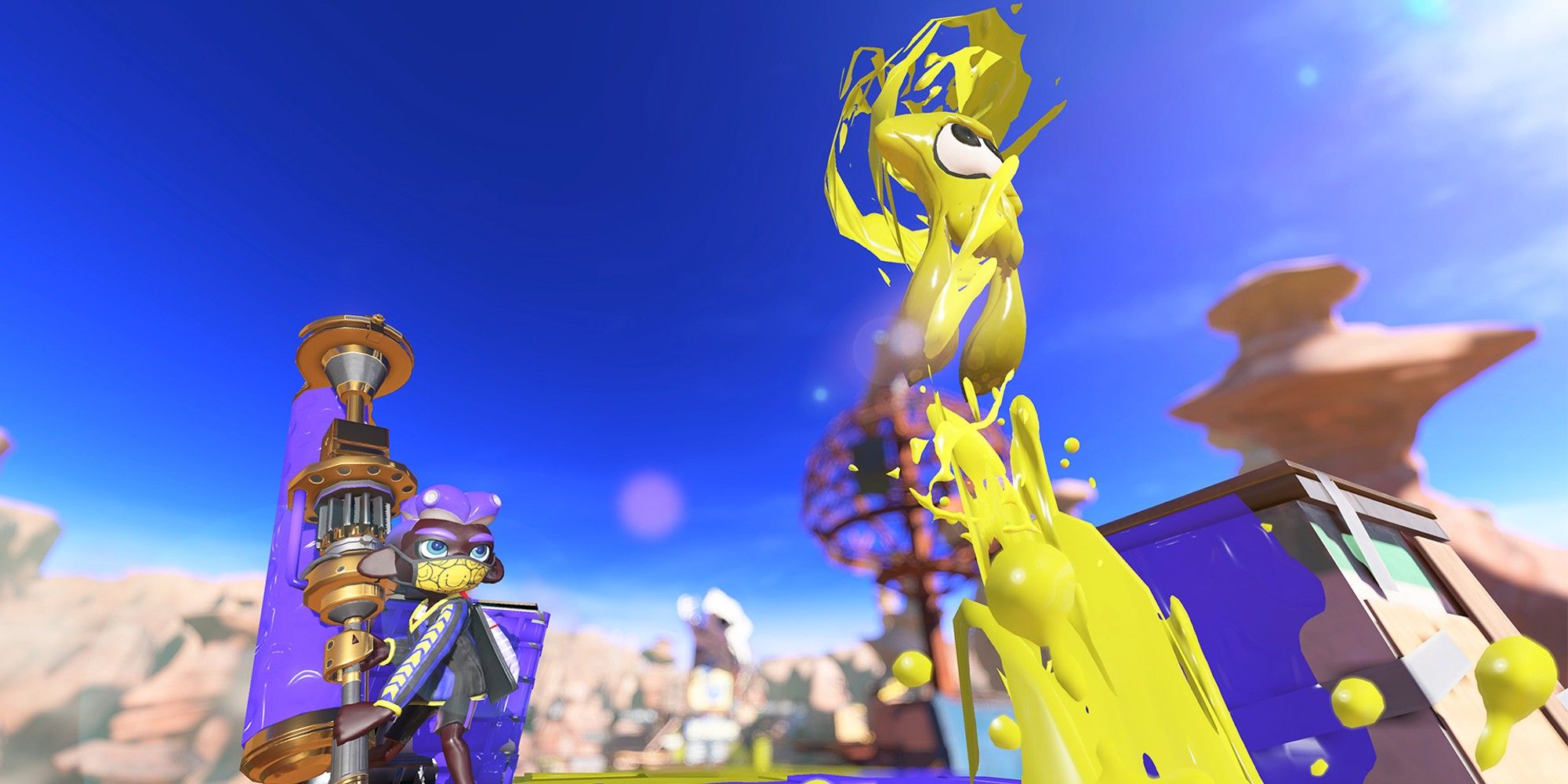 One of the few complaints about Splatoon 3 is that it doesn’t feel like a huge step forward for the series in gameplay. But that is not to say that there aren’t new mechanics for high-level players to sink their teeth into.

The biggest of these are the new Squid Surge and Squid Roll. The Surge allows players to charge up a dash by pressing and holding the B button so you and swim up vertical inked surfaces quickly. The Squid Roll might be the coolest new gameplay feature though – if you are quickly swimming in one direction and then change direction on the analogue stick, your kid will jump out of the water in squid form and change direction. What’s more, this move will give you a brief invincibility window, and paired with the Splat Dualies dodge roll, you'll be near unstoppable. 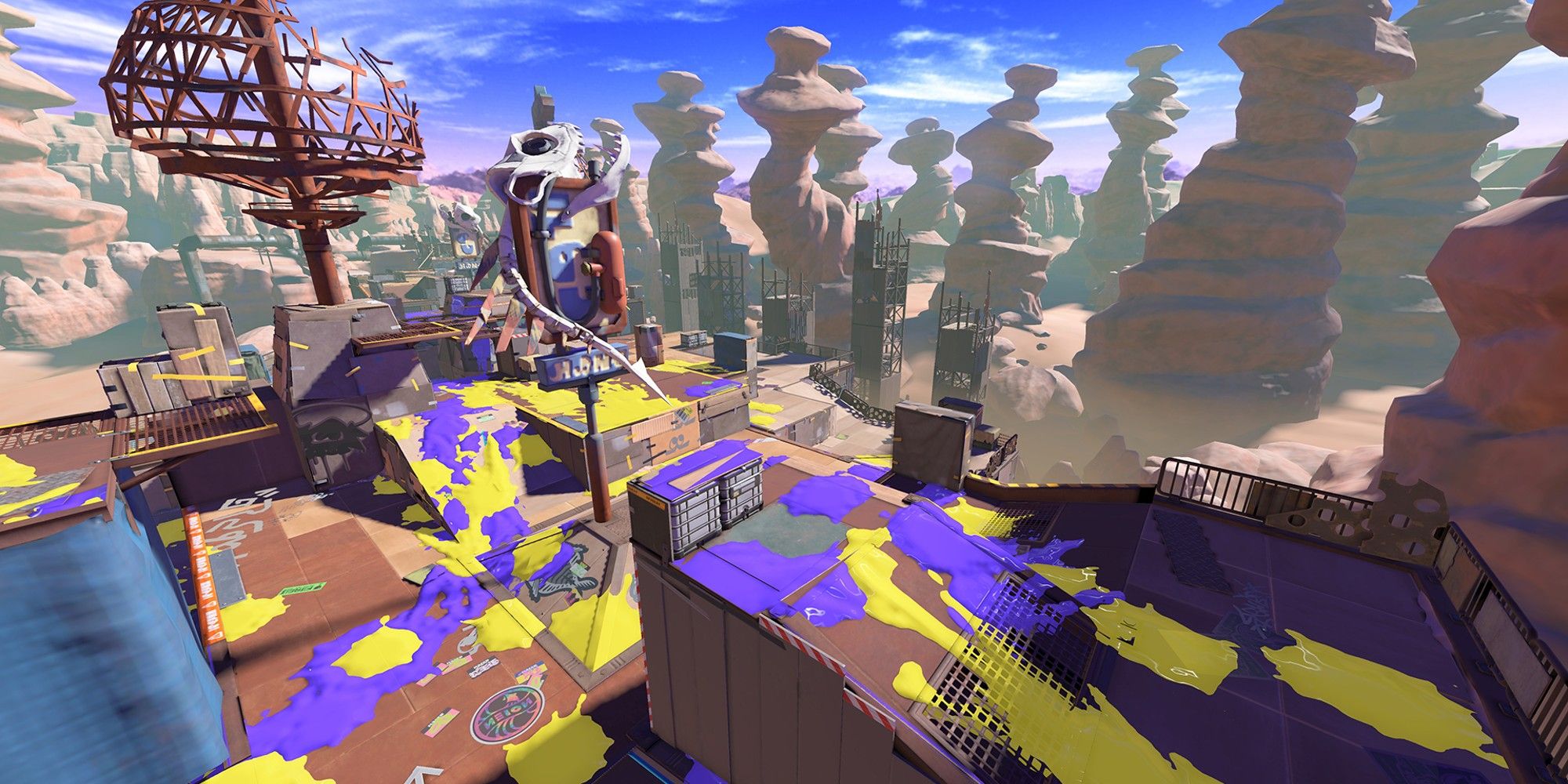 The somewhat divisive, two maps per hour, rotation returns in Splatoon 3 but the good news is that there are a bunch of new maps to explore. These include five new desert-themed maps including; Scorch Gorge, Eeltail Alley, Hagglefish Market, Undertow Spillyway and Mincemeat Metalwork.

On top of this, seven maps from the previous games also return bringing the total to 12. While this is four less maps than Splatoon 2 had by the time Nintendo ended support, it has been confirmed that new maps are on their way in the coming updates. 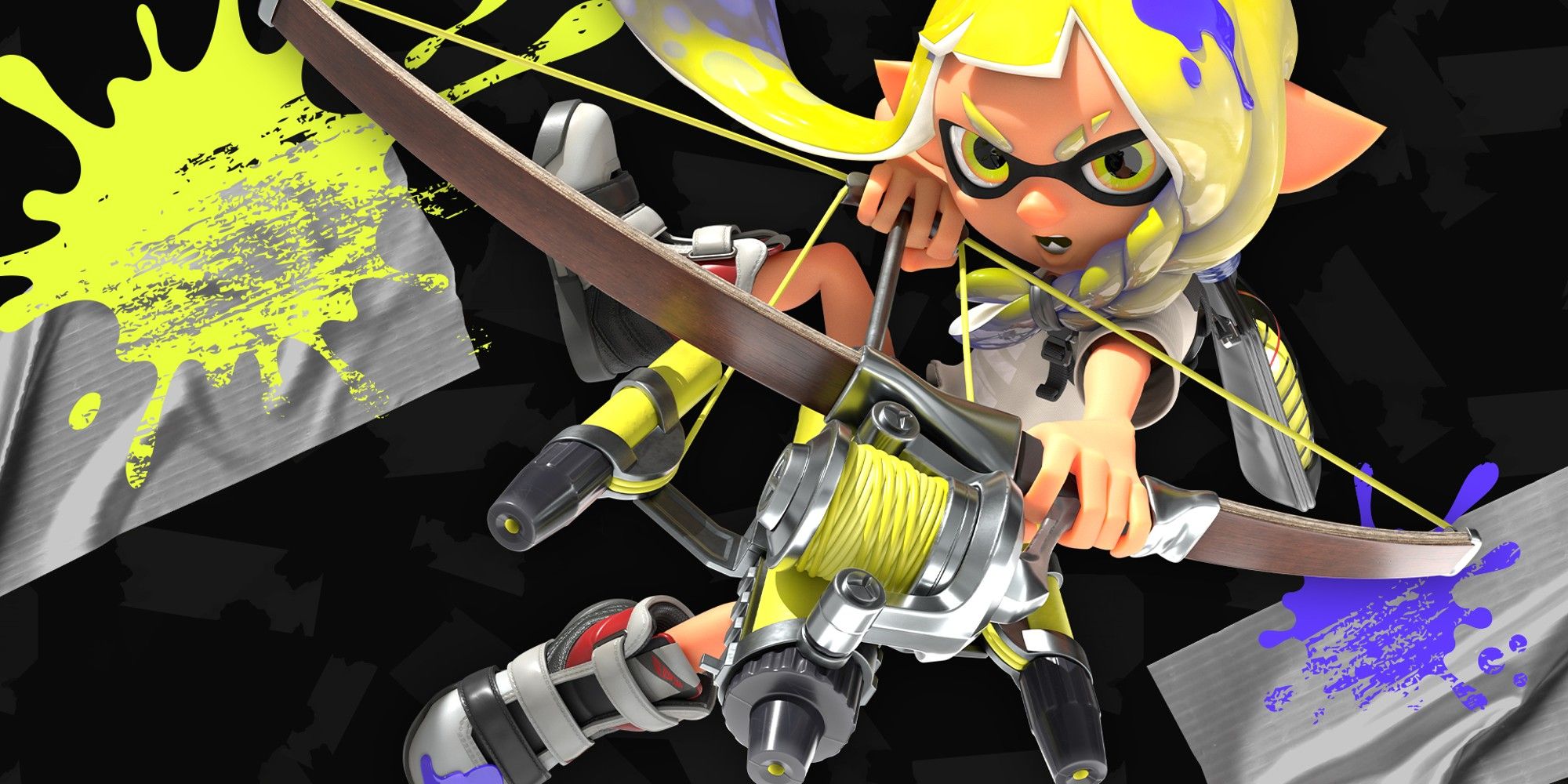 As far as new weapons go, there aren’t a lot yet, but the new ones that are in the game are still pretty cool to use. First is the bow-like Tri-Stingers that fire off three shots at once in different directions. Tri-Stringers aren’t the easiest weapon to learn, but once you get used to the spread, they can be a deadly medium-long range option.

The other new weapon is actually the first of a whole new class known as Splatanas. The only one currently in the game is the Splatana Wiper, an oversized window wiper that sends out disks of ink when swung and can be charged for a melee hit at close range.

There are also three new Special Weapons you can earn by inking enough surfaces or splatting your enemies. These include the team buffing Tacticooler, the area of effect tracker Wave Beaker, and the deadly dash and splat Reef Slider. 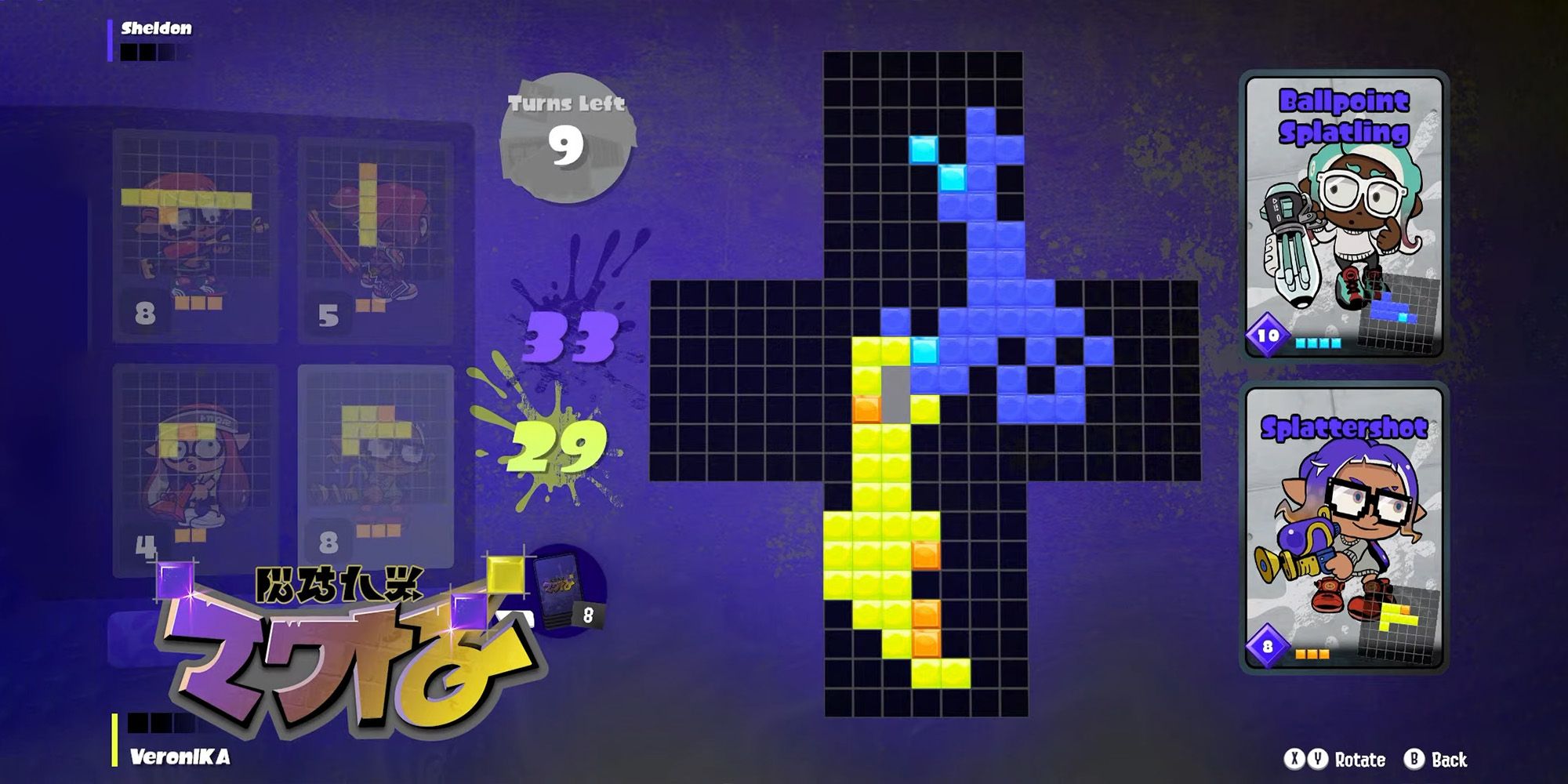 This entire new mini-game, not seen in the series before, adds a tabletop card collecting game to the series. The game takes place on a gird with two players playing cards that represent ink being splatted on the playfield.

Just like the main Turf Battle game mode, the goal is to splat the most ground by the time the timer runs out, or in this case, the most squares. 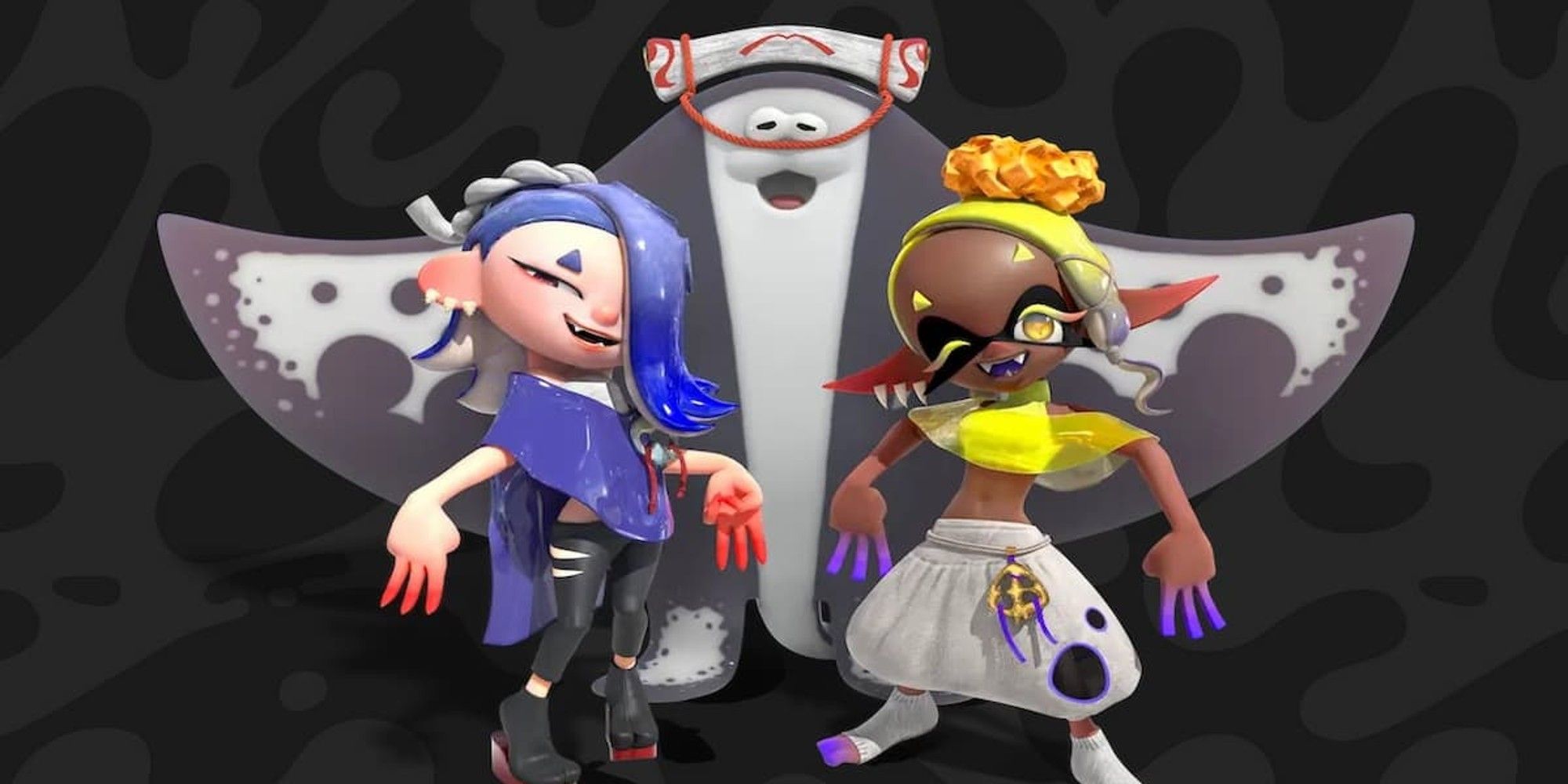 Fans of the Splatoon series have a special place in their hearts for each game’s crew of announcers. Marie and Callie in the first game became Miiverse icons, while Pearl and Marina in the second game were the members of the in-game music group Off The Hook and produced some of that game’s best songs.

Splatoon 3 introduces not two more lovable announcers, but three. The stylish Frye, fresh Shiver, and the big man himself, Big Man. The three of them make up the band Deep Cut and host Anarchy Splatcast. Best of all, they no longer interrupt you with map updates every hour, instead only chiming in with a pop-up notification alerting you to the map changes. 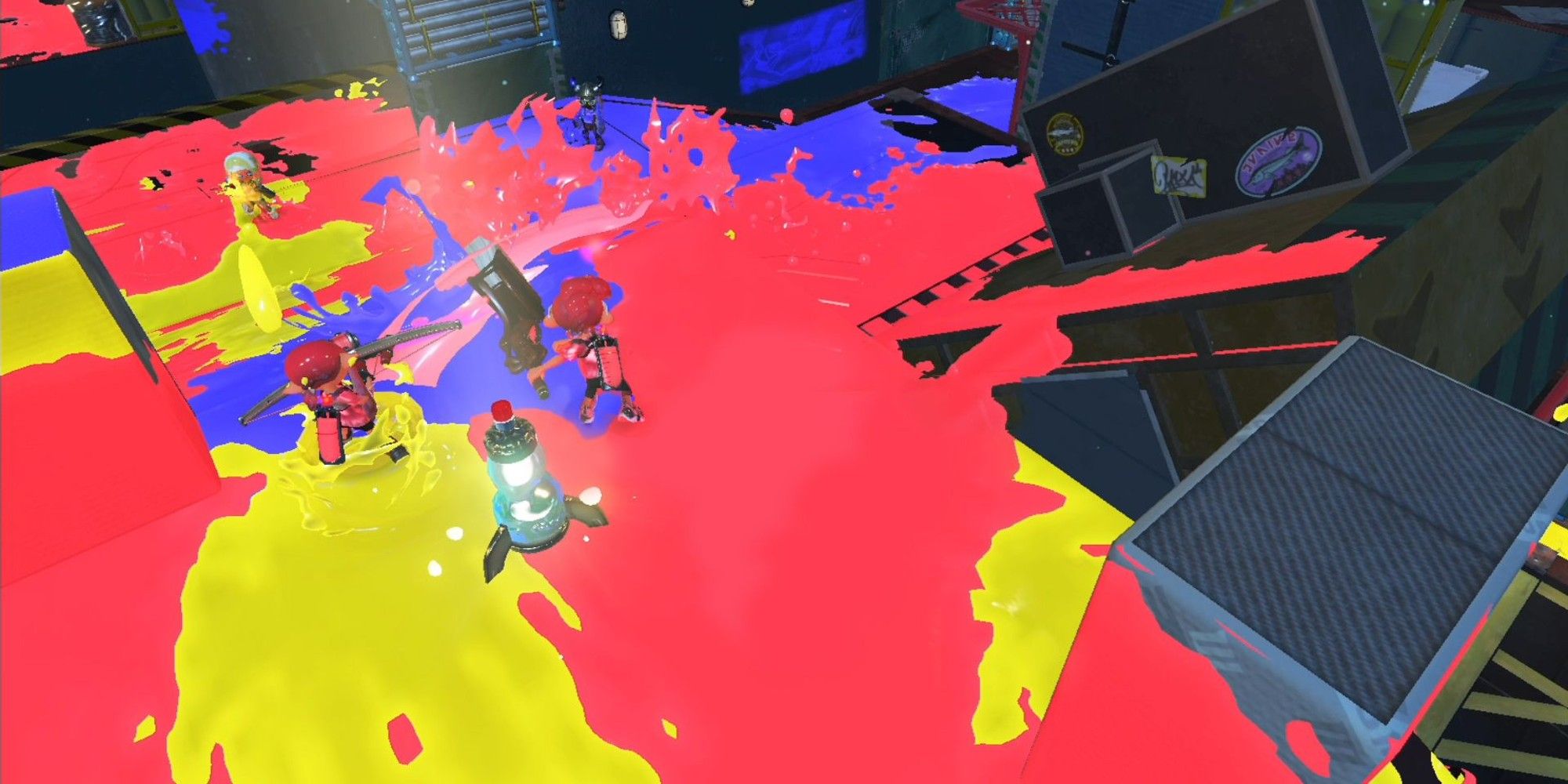 By far the most iconic part of the Splatoon series is the Splatfests, of which pits the community against each other by poising the hard questions like; Cats or Dogs? Tick or Treat? Or Mayo or Ketchup? Once players choose a side, they then compete in matches to earn points for their team over a weekend. While this system is still in Splatoon 3, it has seen a huge overhaul.

Splatoon 3 sees the introduction of three-way Splatfests, pitting three teams against each other. The first of these was a choice between Rock, Paper, or Scissors – which saw Team Rock take the victory.

The gameplay of these events has seen an overhaul too, with the fest being made up of two halves. The first two teams at a time will go head-to-head in traditional 4v4 matches. However, the second half of the fest will see the winning side start to spawn in the middle of maps, with two other teams pawning at either side and fighting to dethrone the leading team. It can be a lot to take in, but makes much more sense once you play a few games. So, pick a side, get inking, and explore this new mode!