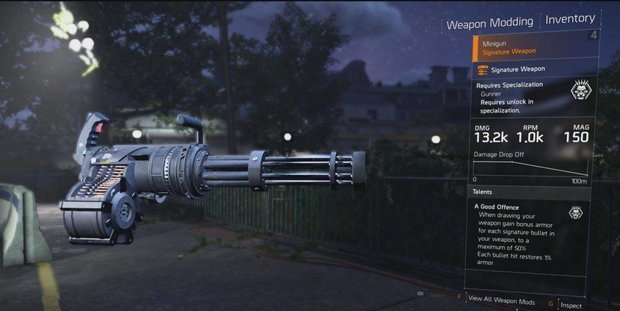 • Once the Gunner arrives on live servers, you’ll be sent on a Special Field Research assignment to unlock it.

• The Gunner employs new tactics like the Banshee special and Riot Foam grenades.

• You can immediately unlock the Gunner if you’ve got the Year 1 Pass. Don’t forget, you’ll also be able to do Special Field Research that unlocks unique cosmetic items.

• New UI elements are coming for specialization ammunition. Here’s how to earn them:

• Your agent’s life bar that will fill slowly. But, headshots, killing enemies effected by status, and additional Specialization actions will help fill that bar more quickly

• Ammunition will be easier to track and appear less randomly.

• Specialization trees are getting a rework. Expect to see new nerfs, buff, and changes.

• Generic gear mod slots have been added and a “like-for-like” system has been introduced. This allows for more streamlined, more visual modification.

• Non-toggle Rogue has returned to the Occupied Dark Zone.

These are only some highlighted changes – you’ll need to wait for the official patch notes to see the full list of changes.

Ammo Bar: The new way to get Signature Weapon Ammunition

To make the Client / Server connection more transparent – a Network Stats tab has been added to the game settings overview where you can see the specifics to your connection.