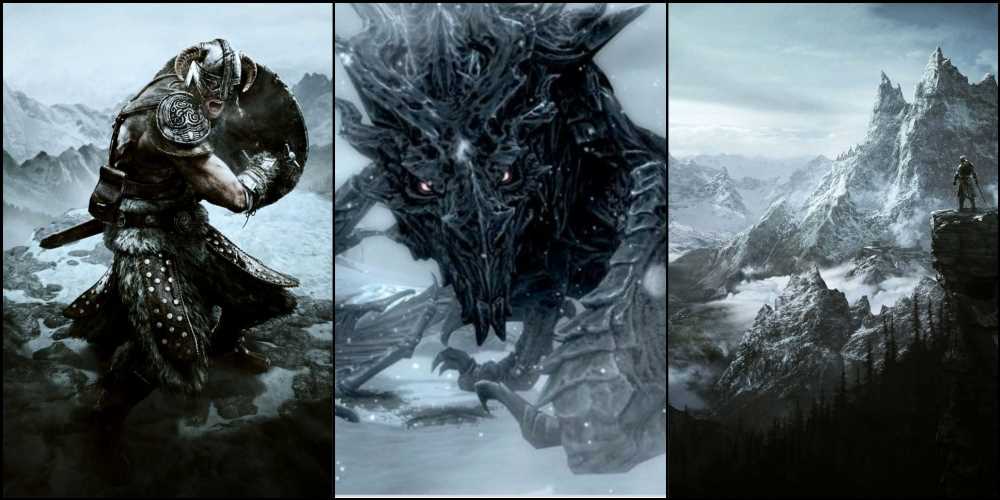 The Elder Scrolls series has been around for almost three decades now, and there have been plenty of Elder Scrolls games released during that time frame. Bethesda's flagship is likely to keep fans coming back for the foreseeable future, featuring some of the most expansive and well-developed fantasy lore in the history of gaming.

When it comes to Elder Scrolls games, none are more popular than the iconic Skyrim. The game has given us over ten years of enjoyment since its launch, with many players having racked up dozens playthroughs — and that's before we figure modding into the equation. That’s a testament to how good the main plot of Skyrim is. Whether it’s dragons, an ancient prophecy, or a secret society, there’s a lot to cover when it comes to Skyrim’s plot. Here's what it looks like if we do our best to summarize it…

The Setting Of Skyrim 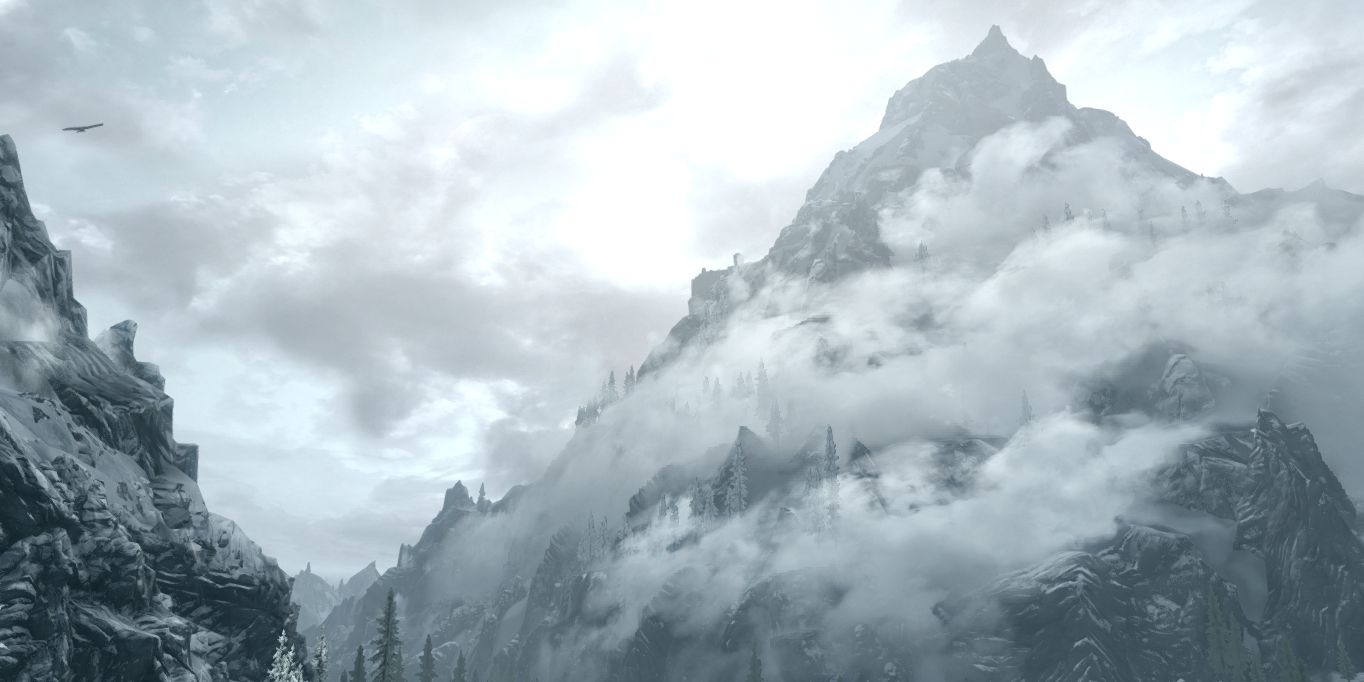 Ulfric Stormcloak assassinated the High King of Skyrim with his Thu’um, or voice, and now believes he’s the new rightful king. Naturally, this has caused a ruckus in the province. Those who believe in Ulfric and his claims sided with him, calling themselves the Stormcloaks. Those who believe a killer shouldn’t be king and feel that the High King’s successor should be someone less controversial aligned themselves with the Imperial Legion, which is still licking its wounds from a conflict with the Aldmeri Dominion and largely under the boot of the Thalmor as a result of the White-Gold Concordat — the lopsided treaty that ended it.

While still a vital part of the story, the Skyrim Civil War is mostly background fodder for the main quest. The main quest centers around the Dragon Crisis, which also began that same year.

Part One: The Dragon Crisis 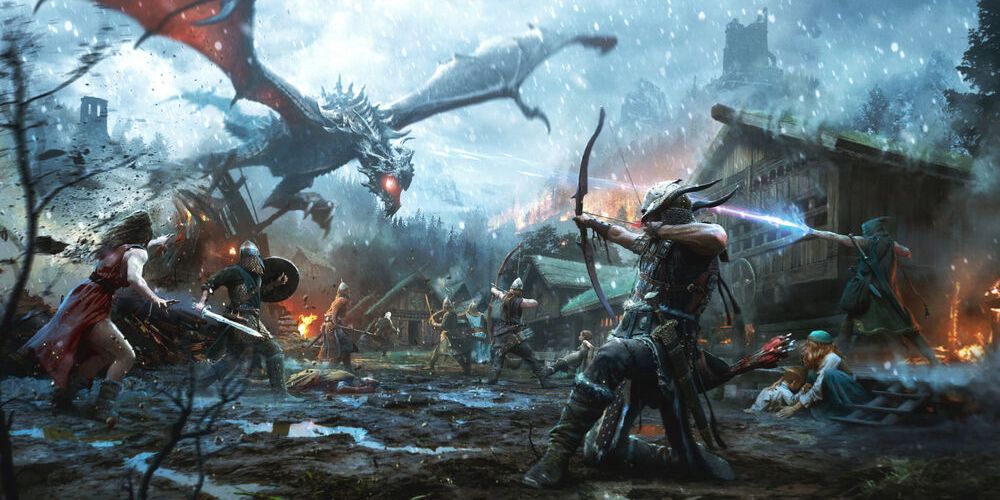 The player character, who will be referred to as the Dragonborn, was caught illegally crossing the border and walked straight into an Imperial patrol set to ambush the Stormcloaks. It's a classic case of being in the wrong place at the wrong time. The Imperials captured all the Stormcloak rebels and assumed the Dragonborn was one of them. Due to their crimes against Skyrim and its people, Ulfric Stormcloak and his lackeys were sentenced to death. This included Ulfric, his fellow Stormcloak soldier Ralof, the horse thief Lokir, and the Dragonborn.

Just as the Dragonborn is about to be executed, a massive dragon known as Alduin attacks Helgen. It's the first dragon seen in centuries, and it burns down nearly all of Helgen. Only a few people manage to escape, with Ulfric Stormcloak returning to Windhelm and the prisoner making their way to the nearest town, Riverwood. 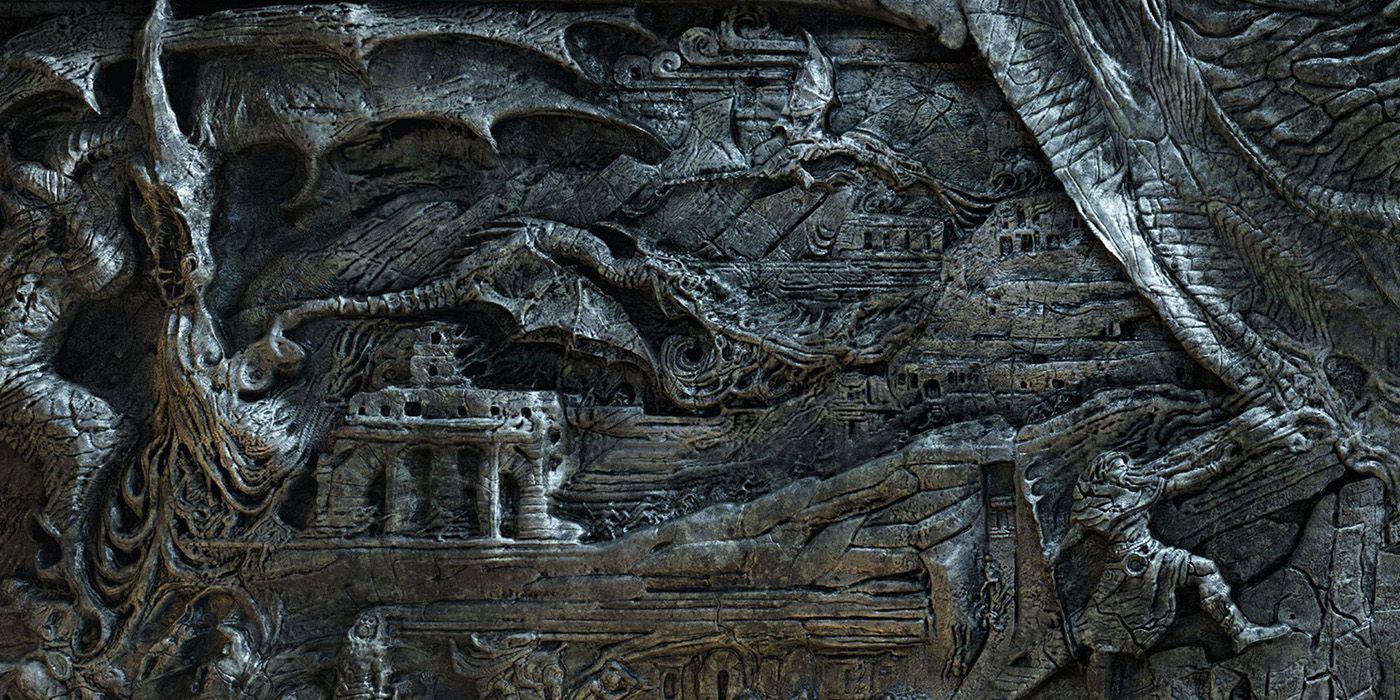 The Greybeards give the Dragonborn a quest to retrieve the Horn of Jurgen Windcaller, who was the founder of the Greybeards. Upon completing the dungeon, all the Dragonborn finds is a note telling them to meet someone at the Sleeping Giant Inn in Riverwood. Once they arrive, they're intercepted by Delphine, the innkeeper.

Delphine reveals that she’s actually a member of the Blades, a group of dragon slayers who served the Dragonborn in ancient times. She organizes a plan for the Dragonborn to infiltrate the Thalmor Embassy. The Thalmor are a group of High Elves who have jurisdiction in Skyrim, with their primary agenda being making sure no one is worshiping the god Talos. Given that Skyrim venerates Talos most among the Divines, this isn't a popular practice. At all.

After a successful heist in the Thalmor Embassy, the Dragonborn and Delphine learn that another member of the Blades is hiding out in the Ratway in Riften. They locate Esbern and, together, all three of them make their way to Sky Haven Temple. There, the Dragonborn learns about the Dragonborn Prophecy.

Alduin’s Wall is a mural in Sky Haven Temple that predicts future events. It is said that the dragons would return to Skyrim in a time of crisis — obviously proven correct, as they showed up during the Skyrim Civil War. But, there is still a glimmer of hope. The ancient Nords defeated Alduin by removing his ability to fly. Esbern believes the Dragonborn can learn this ancient shout to give himself an advantage against Alduin. 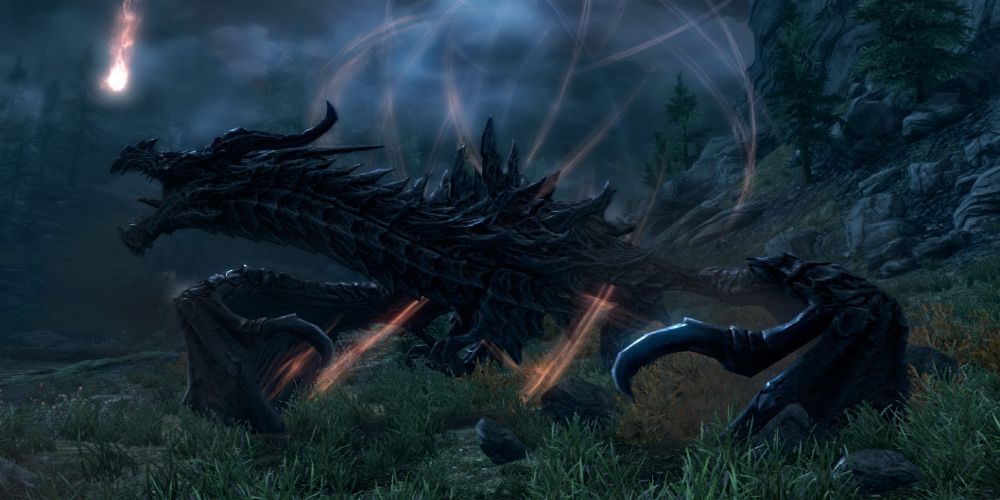 After a long and arduous journey to retrieve an Elder Scroll that involves diving into the ancient Dwemer city of Blackreach, the Dragonborn returns to Paarthurnax with a scroll in hand and reads it at the Throat of the World. There, the Dragonborn sees three ancient Nords: Felldir the Old, Hakon One-Eye, and Gormlaith Golden-Hilt. These Nords used the Dragonrend shout to overpower Alduin.

After looking at the scroll, Alduin attacks Paarthurnax and the Dragonborn at the Throat of the World. Thankfully, the Dragonborn is able to use the Dragonrend shout to overpower Alduin, just like the ancient Nords did. Alduin gets away, but this gives the Dragonborn confidence that he has the power to subdue the evil dragon.

The Dragonborn eventually learns how to summon a dragon from Esbern. The dragon, known as Odahviing, might have some valuable information about Alduin, so they trap it at the top of Whiterun’s Dragonsreach with the Jarl’s help. Odahviing spills all the beans, and then some. According to the dragon, Alduin is weaker than the Dragonborn, so Alduin would go to Sovngarde, the Nordic afterlife, to feed on the souls of the dead and regain his strength.

There's no way for anyone to get to Sovngarde from the natural world, but Odahviing offered the Dragonborn a ride to Sovngarde in exchange for his freedom. The Dragonborn accepts the deal and makes their way to Sovngarde. There, they meet up with the same three heroes from the vision in the Elder Scroll to take down Alduin.

After a difficult fight, Alduin is slain by the four heroes, and peace is restored to Skyrim — to an extent. There's no canonical ending to the Skyrim Civil War, so it's not confirmed if the Imperials or the Stormcloaks are in charge of the province. Regardless, with Alduin slain, Skyrim is in a much better place.