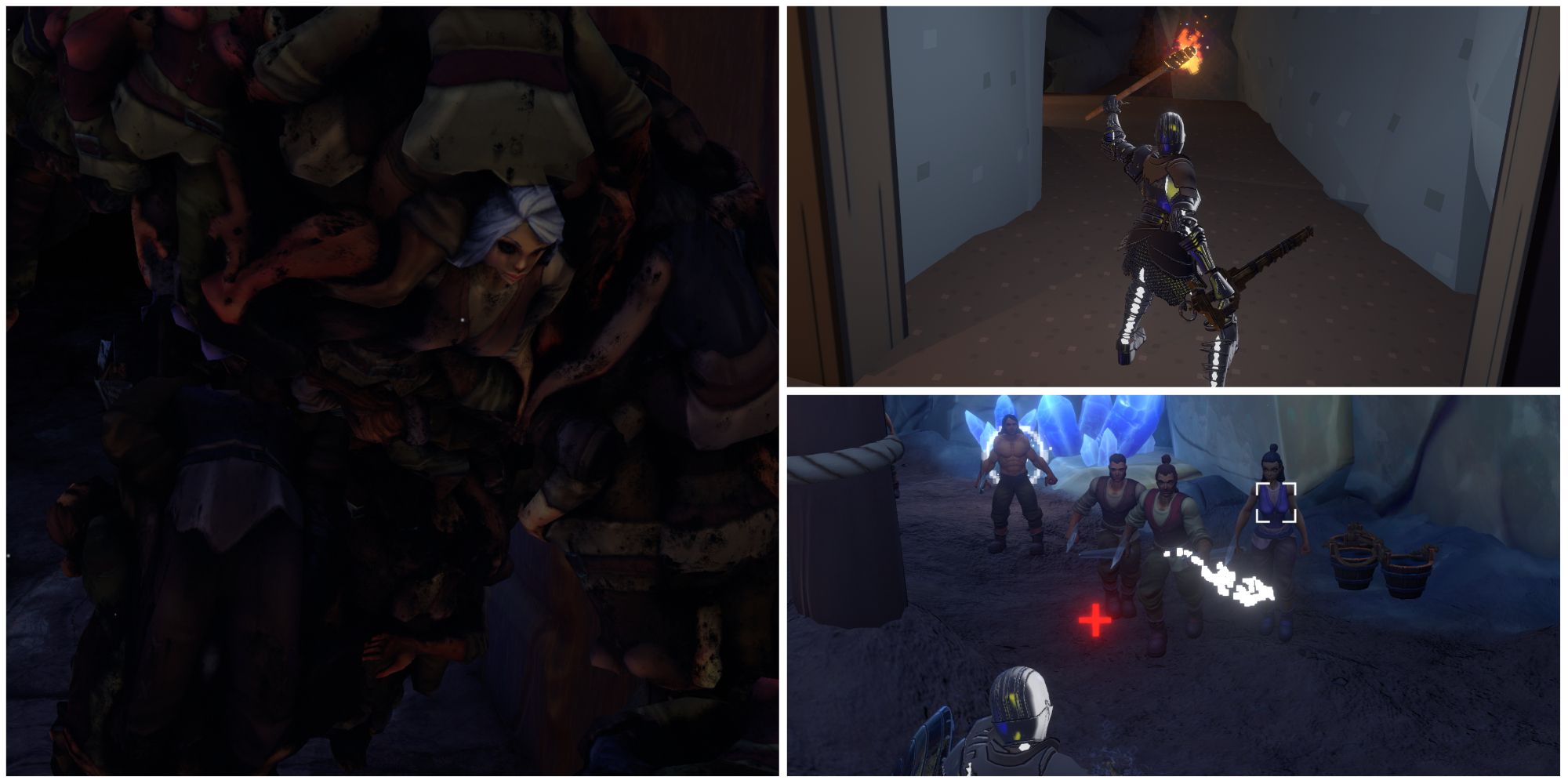 Challenging boss encounters and Soulslikes go together like chocolate and peanut butter, so naturally, The Last Hero of Nostalgaia carries this trend into its pixelated landscape of death and despair. While there aren't a ton of bosses for you to square off against in Nostalgaia, what's here is clever and challenging enough to quench your Soulsborne thirst.

The Grinder, for example, is the first boss you will encounter after the game's tutorial boss and can be immensely challenging in the first few bouts. However, seeing as it's the first real boss of the game, it's not overly complex or demanding once you catch onto its gimmicks. 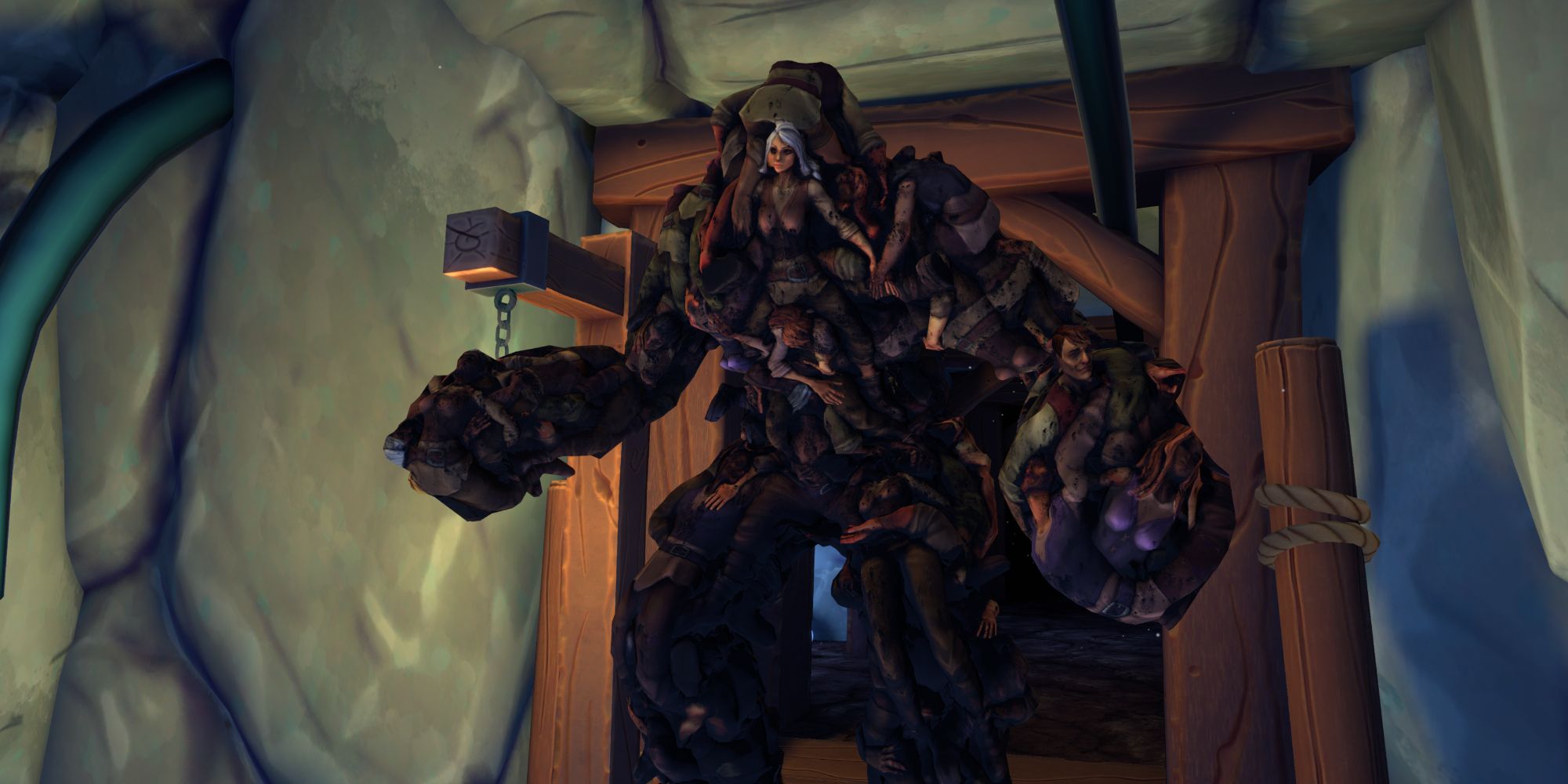 The Grinder is a boss found deep within The Depth, the third area of the game, just after you reach the Oreshaft Smelter Tether, where you can upgrade your weapons. This boss encounter has two phases but only has physical attacks, meaning you will only need a shield that blocks 100 percent physical damage, such as the Shield of Nostalran.

How To Defeat The Grinder 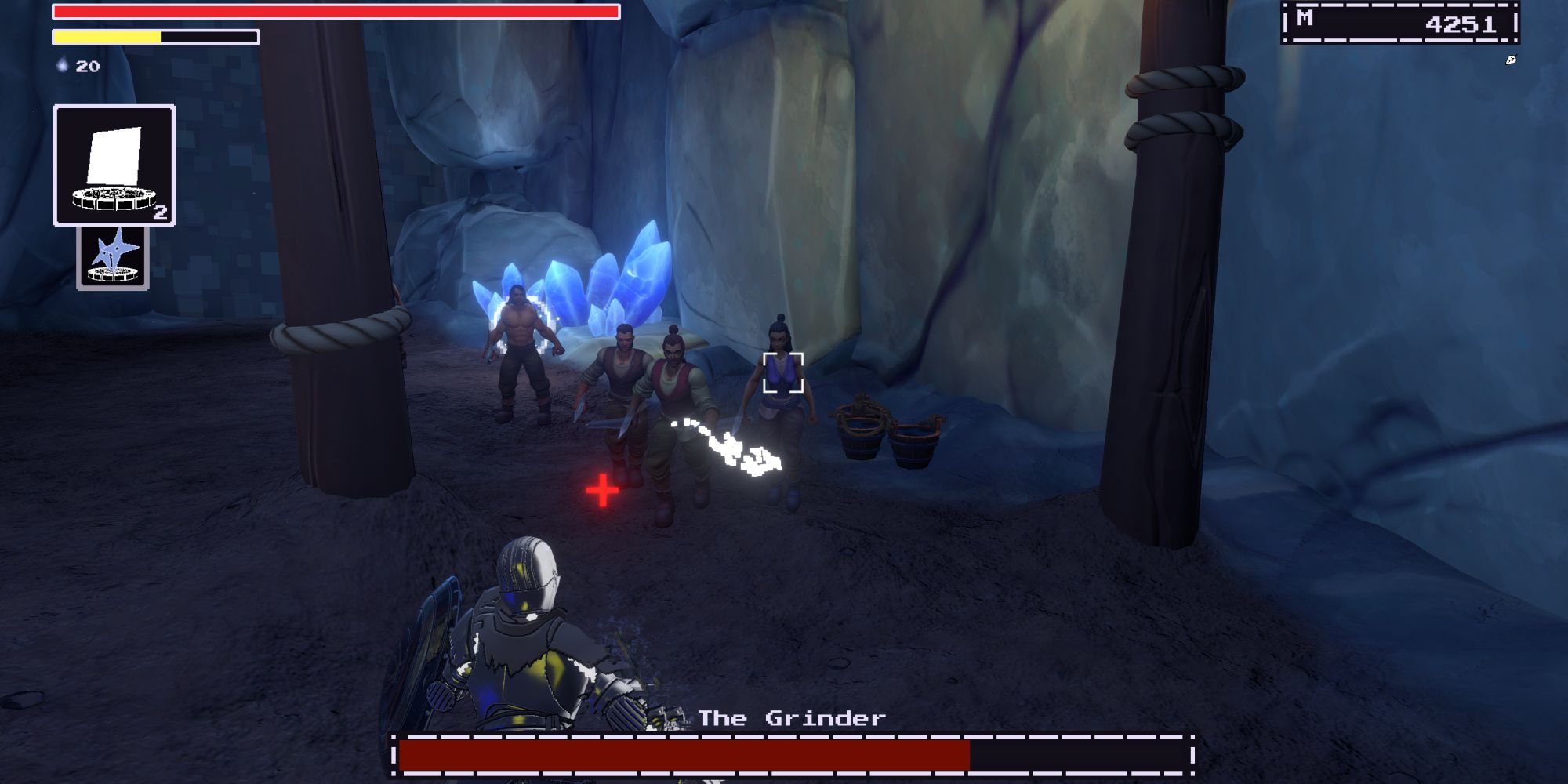 As mentioned briefly above, The Grinder is a two-phase boss fight that focuses on a central gimmick that seems hard at first but quickly becomes manageable once you realize what's going on. However, as it goes, knowing something is only half the battle. You will still have to conquer this beastly opponent to advance your journey.

Phase one opens with a group of six to seven NPCs swarming you. While this can be daunting on the surface, these enemies are fragile and hardly have any health. We recommend singling out whoever is in front of the pack and using your shield to block retaliating attacks after you land a hit. Be patient here. While you might want to spam attack or quickly get through them, that will likely get you hit several times or killed, and it's not like you have the extra Heroic Icons to heal through it.

After eliminating the NPCs, a cutscene will play out that introduces The Grinder to the arena. This is where things get real. The Grinder is a mass of bodies that form to make one large one that's also shielded by rock and is quite formidable looking. However, in this phase, The Grinder is somewhat predictable and leaves itself open for you to get many hits in.

The Grinder will often launch into a series of three to four swings before coming to a complete stop on the final one. Block the first few strikes, and then move to their rear as they perform the final one to land two uncontested hits before going back on the defensive. There will also be moments where The Grinder charges at you. You can either run at an angle away from them or try timing your roll to evade their charge. Running away from their charge will remove you from any optimal range to deal damage (unless you're using a Source Build). We recommend trying to time your roll, as this will grant you the most downtime before the boss begins attacking again, allowing you to get in three to even four hits.

While there are other attacks during this phase, they are primarily single-hits, meaning you don't have much time to follow up with anything of your own. As a result, we only recommend attacking when The Grinder performs the two attack sequences mentioned above, or you will risk taking unnecessary damage and will have to burn one of three Heroic Icons before the second phase.

After depleting The Grinder's health in the first phase, the second one will instantly begin. The group of NPCs from earlier will return once more, except this time, The Grinder will be on the field alongside them. While this will seem impossible your first time, this gimmick is easily resolvable once you recognize The Grinder's pattern.

In this phase, your primary focus will be on the group of NPCs, which you will deal with just as you did in the first phase. However, in this phase, The Grinder will periodically charge in with an attempt to flatten you when your focus is drawn elsewhere. To combat this, whenever The Grinder charges, rotate your camera to see where they have landed and then land a few hits on an NPC. Once you see The Grinder begin to charge, move out of the way and then rinse and repeat until all NPCs are taken care of, then move on to the next part.

Once every NPC is defeated, The Grinder will return to their previous attack pattern, which can be resolved in the same exact way. Though, be warned that it does seem like they charge much more frequently during this phase, so be prepared to time your rolls to get free hits in without putting yourself in too much danger. They also seem slightly more aggressive, offering a shorter window to get your attacks in, so only land two strikes at most during this phase. You're too close to finishing them here. It's best not to get greedy now!

Lastly, while there isn't much to this boss encounter, getting the rhythm and spacing down can be challenging, so it will naturally take a few attempts before you start learning what's safe for your build and playstyle. Some playstyles will have a much easier time against The Grinder than others. We suspect this might be a relatively painless one for Source Builds, as they can maintain a safe enough distance away from the boss and only have to worry about their charge attacks.

Furthermore, if you are a melee-focused build, especially a Dexterity user, rolling and Stamina management is crucial to your success here. Always keep an eye out on your Stamina, and do not let yourself get carried away with more hits than you have allotted. Land two or three, then bounce and set up for the next phase. Rushing either phase will lead to wasted resources, ultimately leading to your demise.