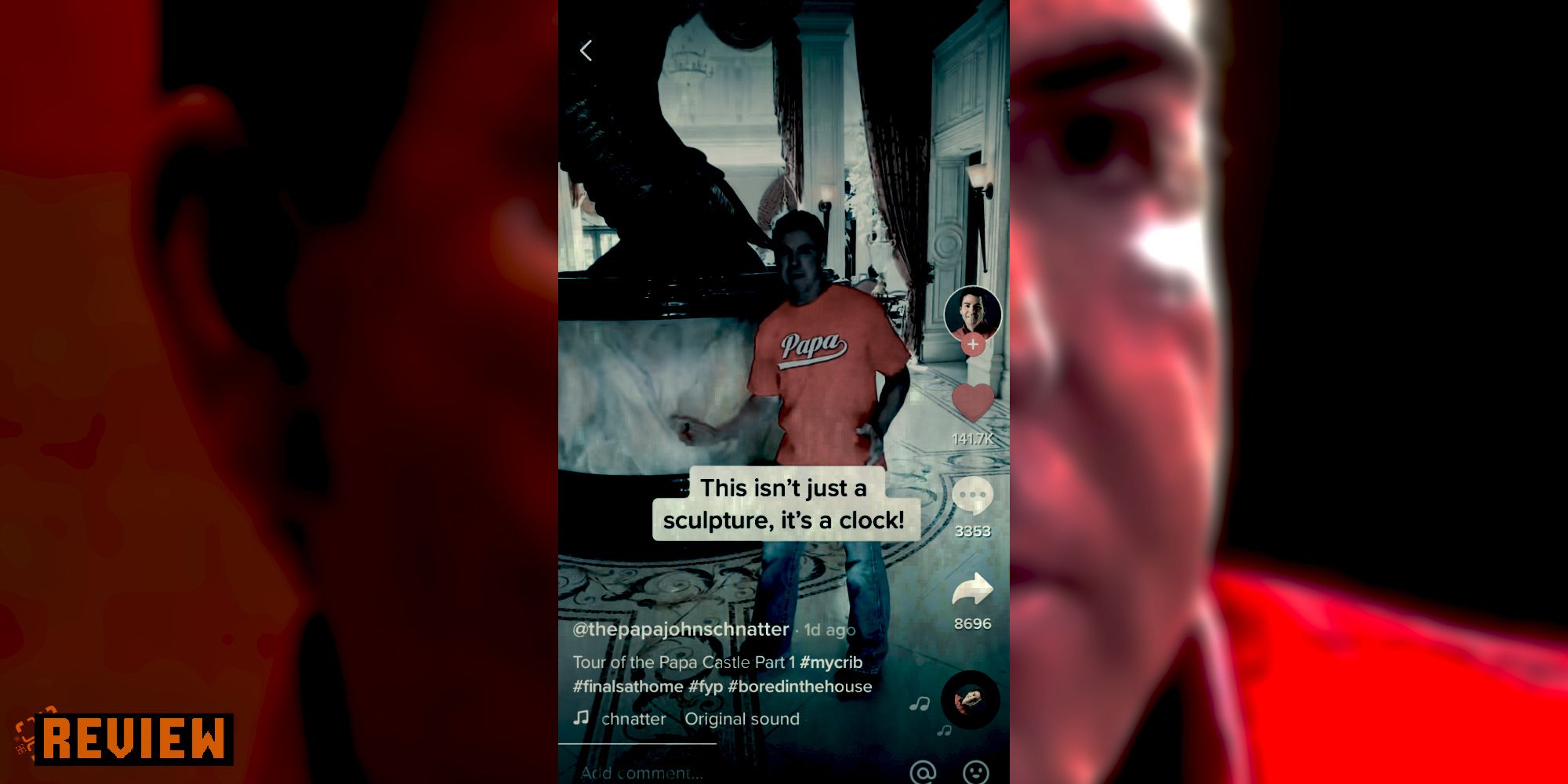 Disgraced pizza baron ‘Papa’ John Schnatter was ousted as CEO from the company that shares his name in 2018. In years since, Schnatter has made multiple attempts to reinsert himself into the public eye. From tantrums about the declining quality of Papa John’s pizza in his absence, to claims that he’s eaten 40 pizzas in 30 days, to appearances on far-right cable news network OANN where he claims he’s trying to “get rid of this N-word in my vocabulary”, the former Prince of Pepperoni has refused to take a just cancellation on the chin. His latest attempt, called @thepapajohnschnatter, is an experimental ARG, or alternate reality game, that’s been unfolding on TikTok over the last 10 months.

@thepapajohnschnatter leverages mixed media and live interactions to tell a haunting story of a man who has lost complete control over his life, and perhaps, his sanity. It utilizes mixed media, including FMV scenes, archival footage, memes, and TikTok trends while drawing inspiration from viral horror projects like Marble Hornets, alantutorial, and Petscop. @thepapajohnschnatter is an ambitious project that blurs the line between reality and fiction while building on the non-linear, detective format established by Sam Barlow’s FMV titles Her Story and Telling Lies. As both the creative visionary and star, Schnatter has created an unsettling reality that functions as both a critique of creator culture and a harrowing peak into the psyche of a socially maladapted pariah with a score to settle and nothing to lose.

The project started in May 2021 with a series of clips from interviews with Schnatter discussing his core values as a business owner. These are decades-old clips that depict Schnatter as a youthful and charismatic leader in his prime, and they serve an important purpose for the story that unfolds. It shows us Schnatter before he fell from grace after blaming declining pizza sales on NFL players that protested police brutality by kneeling during the national anthem. This is before the recording leaked from a sensitivity training call where Schnatter complained that he was being unfairly vilified for calling the protests a debacle when “Colonel Sanders called Blacks n*****s and got away with it.” Before he was forced out of the company, before his wife left him and took half of his fortune. This is Schantter before the fall, the way he wishes he could be remembered.

He talks about the value of humility and showing respect to employees and customers. He talks about his relationship with God and his belief that owning a business is his purpose in life. This is Schnatter in character as Papa John, or perhaps, Schnatter and Papa John together in a time when the two identities were inseparable. Schnatter establishes a version of himself here and presents a problem. Did he change, or were we just unaware of who he really was? Is that still who Schnatter is, or has he become something else. Who is Papa John, really? From the jump, we’re asked to question the narratives we’ve been told and the biases we hold.

Then, in the very next video, Schnatter shatters that reality. Here we’re presented with Schnatter as we know him today: a swollen, red-faced man who’s perpetually out of breath and drenched in sweat. He’s got a vacant look in his eye and a hollow smile that gives his face an uncanny quality. The first video is a static close-up of Schnatter’s face accompanied by a TikTok sound telling him to close his eyes and bite his lip to make the Fuckboy Face – a popular trend at the time.

While it may seem like a benign and insignificant video, it's anything but. As you dig deeper into the @thepapajohnschnatter alternate reality, you’ll find clues hidden everywhere. There’s a good reason Schnatter’s first real video has him closing his eyes and mouth, remaining silent and doing only what he’s told. Is this a commentary on the “truth” about his ousting that he’s frequently tried to expose to the press, or is there something more sinister at play here?

So far 30 videos have been posted by Schnatter, and each one is a treasure trove of detail and hidden meaning. The story of @thepapajohnschnatter is told primarily through subtext, and therefore is very much open to interpretation. That may sound like a criticism, but it's a necessary component of the genre. Alan Resnick’s ARG alantutorial was so captivating because it started out as a generic How To video series that slowly evolved over time into something macabre and surreal. It felt real, even if you knew deep down it was fake. Similarly, Schnatter is playing the part of an awkward and out-of-touch middle-aged man using social media to try to be part of a culture that left him behind. Schnatter embodies both a generation desperately clinging to its youth, and disgraced millionaire desperately clinging to his former image. Buried beneath the surface of all that strife is an unnerving sense of danger and foreboding that’s becoming more present with each new video. It’s a brilliant performance.

Most of Schnatter’s content is pizza related, unsurprisingly. But while these may seem like the most innocuous videos in the bunch, they actually hide some of the biggest clues. Take a look at this one from Valentine’s Day. Schnatter opens up a pizza box and says “I’ll give you a pizza my heart if you’ll be my valentine.” It may just seem like cringe pun, but pay special attention to Schnatter’s body language and facial expressions. Can you see the way he tenses his shoulders before shuffling his feet and shimmying around? Can you see the fear in his eyes as though they’re screaming for help? I’ve watched this TikTok over 500 times, and all I can see is a captive trying to squirm out of the ties that bind him. If you look deeper, you’ll start to see a pattern emerge.

Look at this one where Schnatter tries to do the ‘Food Dance’ TikTok trend made popular by @JohnMcginnis36. Schnatter tries to thrust two slices of pizza to the beat of the music but he couldn’t further off. There’s no possible way anyone could knowingly publish a video of themself looking this foolish and uncoordinated. Again, Schnatter is crying out for help. Is he sending a message to us with the pizza slices? Maybe it’s morse code or some kind of cypher. There’s still a lot to be uncovered in @thepapajohnshnatter.

I haven’t decided whether @thepapajohnschnatter is telling a story about a man being forced to do TikTok trends by some unknown villain on the other side of the camera, or if Schnatter, a broken, disgraced ex-CEO with nothing to lose, is building towards a violent, psychotic break with each new video. For now, I’m reading it as both. Schnatter is the living embodiment of the victim/abuser duality, and @thepapajohnschnatter is a way for him to explore those opposing identities within himself. He is both reviled by society and a pariah among his former class, yet believes he is a casualty of greater forces that conspired to take away his legacy. The beauty of @thepapajohnschnatter is how much freedom it gives players, both to experience the videos and to arrive at their own conclusions about their meaning. With that in mind, I’ll leave you with the video I consider to be the pièce de résistance of the entire ARG; an image of a man alone in his tasteless castle, memeing in front of floating cars, a 20-foot statue of bald eagles fighting, and what appears to be church pews mounted over a fireplace. If you have any theories about this one, I think it has the potential to crack the whole case wide open.

Edit: Papa John Schnatter’s representatives reached out to TheGamer and let us know that @thepapajohnschnatter is not an alternate reality game, but in fact is just Schnatter’s actual TikTok account. We’ve added this edit here, though we’re still not entirely convinced that the representative’s message isn’t part of the ARG as well.