The Sims 4 is a life simulator and, like a lot of video games, a form of wish fulfillment. For me, that means my self-insert Sim gets to live in a nice apartment with in-unit washer and dryer, while pursuing a writing career.

But lately, my blissful, digital life has run into a rut: my Sim can no longer enjoy living in the vibrant metropolis of San Myushno or rise higher in her career, because she’s raising twin toddlers. It’s not only burning her out in game, it’s also stressing me out in real life.

When The Sims 4 came out back in 2014, the Sims community was in an outrage because the base game wouldn’t come with toddlers. While they all ranted, I breathed a sigh of relief. Toddlers, in my professional opinion, are the most annoying of all the Sims’ life stages. In my younger days, I primarily played The Sims 2, in which, thankfully, toddlerhood only lasts three days. Those three days were full of crying, dirty diapers, incredibly tired parents, and career stagnation, but they passed quickly. The Sims 2 Sims were fairly simplistic, so when you prompted them to do something, they did it.

After a 2017 patch update added toddlers in The Sims 4, toddlerhood is now one grueling week (if you run with the default aging settings), and that week is hell. Sims in The Sims 4 have a full gamut of emotions and nuanced skills. They can be fine and dandy when they’re grown, but when they’re toddlers, literally everything they do upsets them.

Here’s a typical day for my current character: My Sim comes home, tired and stressed from a day at work, but instead of relaxing so she’s able to work on her skills later in the evening, she must immediately tend to her two children, Russett and Amber. Thankfully, only Russett is crying now — he’s in need of a bath — so my Sim takes him to the bathroom while I have Amber read a book so that she can raise some Imagination skill. Except Amber gets real tired of the book and decides to stomp over to the trash can and empty it. While doing this, she also shits her diaper, gets hungry, and her “social need” plummets. 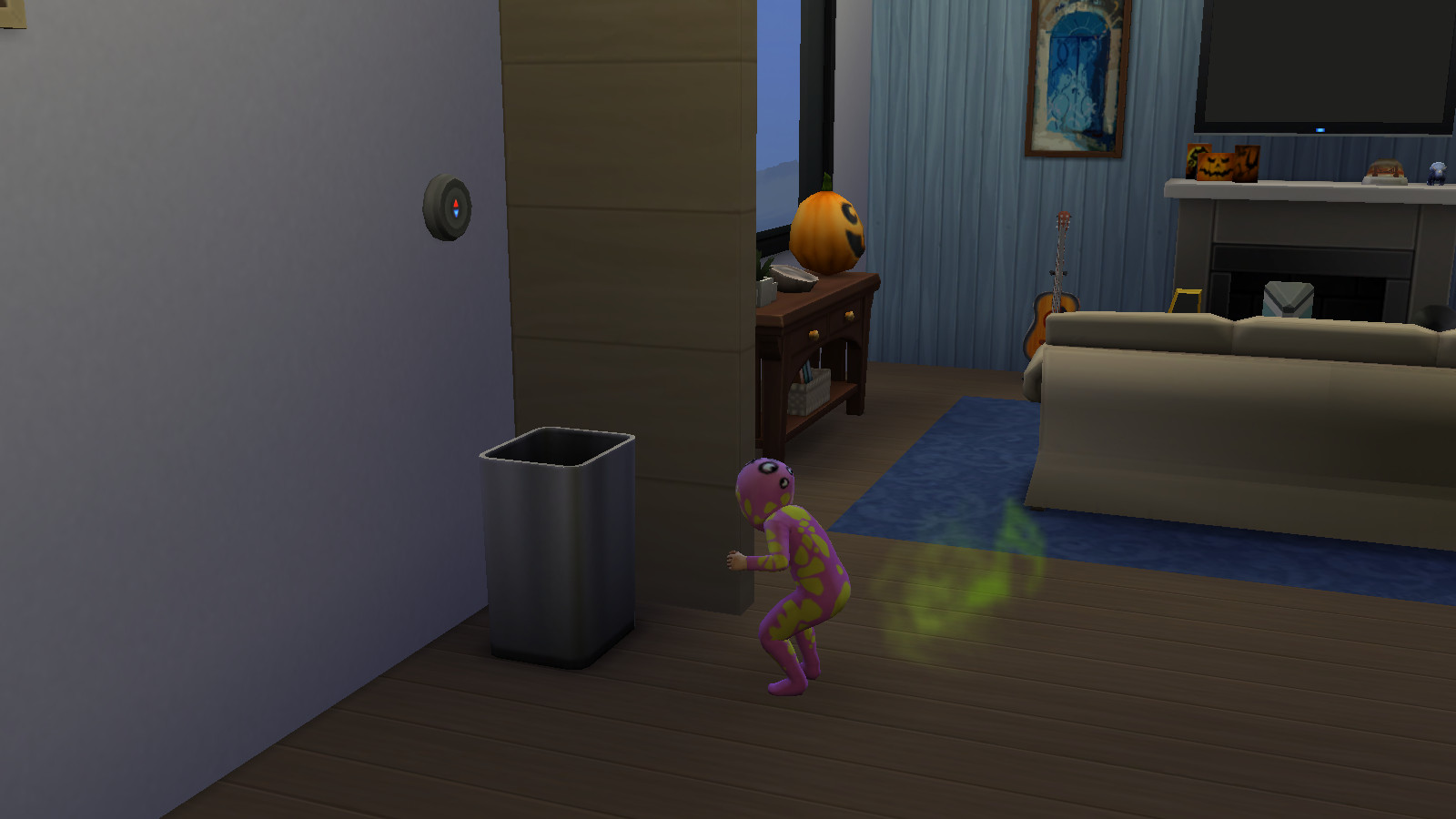 In order to tend to Amber, I let a clean Russett run amok. Meanwhile, my Sim-husband comes home and makes dinner, before promptly passing out due to his grueling tech job. While bathing Amber and attending to the trash, I feel a pang of guilt: Russett’s Thinking skill isn’t as developed as his sister’s. So my Sim does some flashcards with him. Immediately, he throws a tantrum.

My Sim goes to eat dinner, but neither of the kids are hungry. After dinner, she heads to the home office to work on her novel. The kids stumble in right after her, both clamoring because they want to socialize. 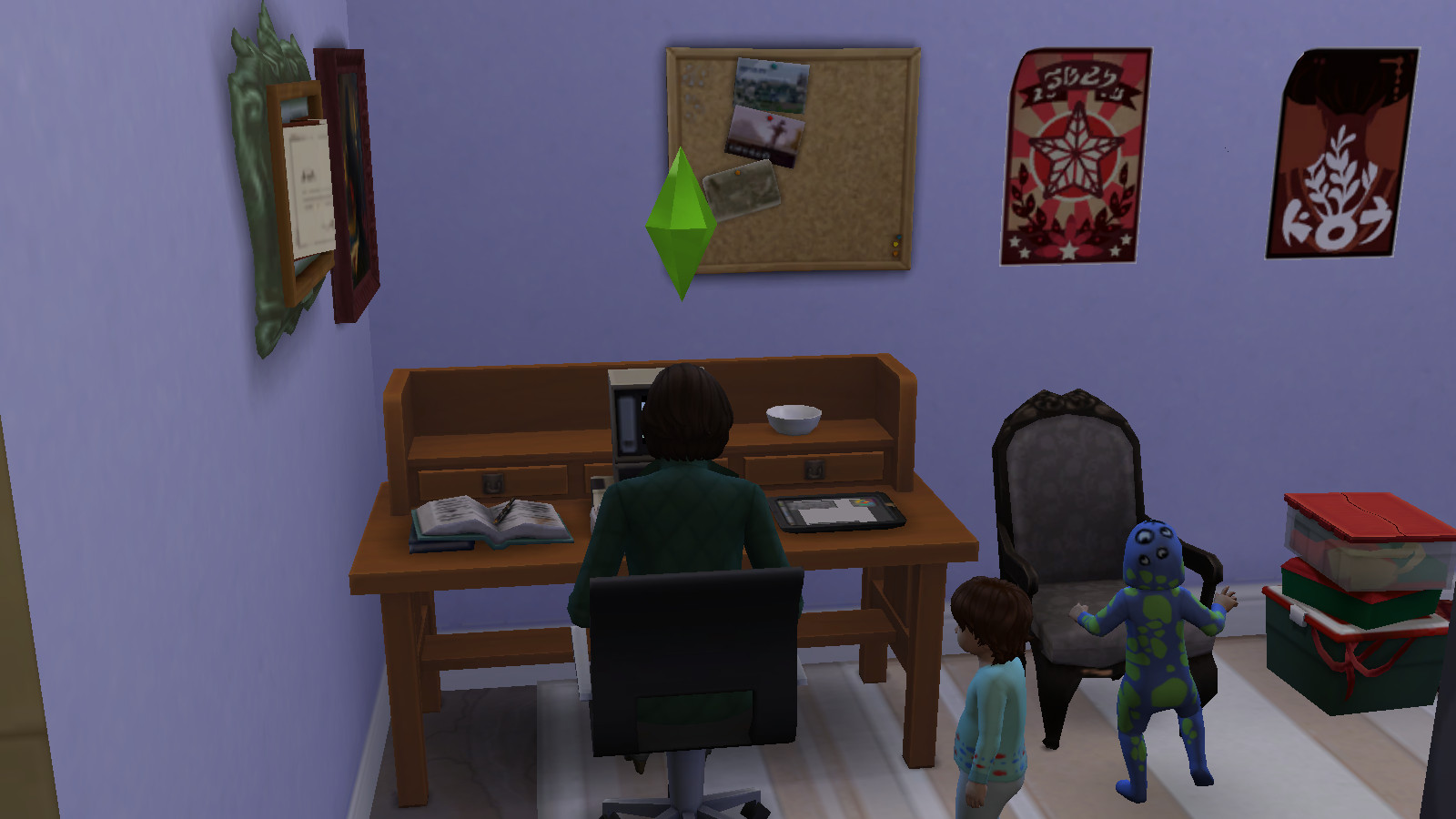 My Sim is only able to do so much before Russett starts crying. Even though he’s super hungry, he throws a fit every time my Sim tries to put him in the high chair. Eventually, he just grabs a plate off the floor and eats it in bed.

The next morning, my Sim-husband wakes up, and I have him whip up some breakfast before sending him to work on his Programming skill. The kids begin to cry, but he’s just one skill away from getting a promotion, so I, a horrible parent, ignore them in hopes they’ll fend for themselves. Amber manages to toddle over to the kitchen and grab some breakfast, which she eats on the floor.

My Sim wakes up to get in some writing before she heads to work. I send the kids to do some skill building, but they can’t learn the Thinking skill without me, so they just look at books to boost their Imagination. Finally, it’s time for my Sim and her husband to head to work — except, I totally forgot to call the nanny, which means that she’s not going to get here in time to make more food, which means I get a notification about social services possibly coming (yes, that happens), which means uh-oh, guess I’m closing the game without saving! 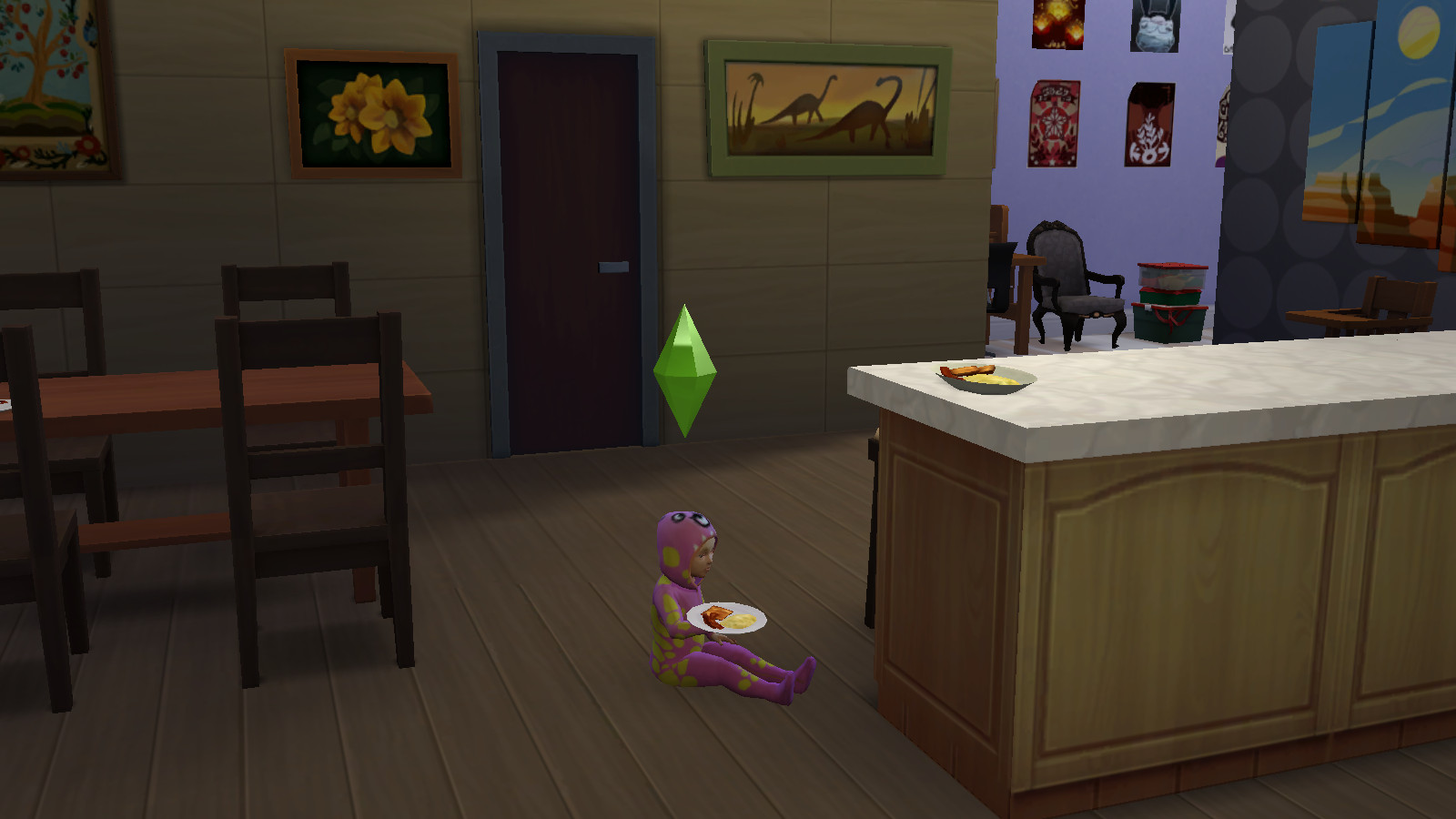 I wonder, as a Sim parent, what I could be doing differently. Should I sacrifice potential career gain, when I’m just at the cusp of being promoted to a short-story writer? Should I take more vacation days to build relationships with my children? Should I pack up and move to the suburbs?! I don’t know how that last one would help but the idea of it just seems so appealing. I just want my children to be happy, healthy, and successful, without having to make any major career or lifestyle sacrifices. Is that too much to ask?

The solution? Parenting via technology

I play The Sims 4 for escapism, but I don’t want to play my family as they are. Lamenting my experiences in real life, my colleague Cass Marshall asks me if I tried the Wabbit Tablet.

“The Wabbit Tablet is beast mode for raising toddlers,” Cass tells me. “It raises their fun and social and also teaches them skills. A long as you’re feeding and bathing them and they’re sleeping the tablet can basically raise them for stretches at a time.”

Intrigued, I purchase one of these tablets the next time I load the game. Unlike the other toys my Sims own, which only teach one skill each, the tablet teaches them all. The tablet doesn’t make my kids throw tantrums. They are calm. They play the tablet. Their social and fun needs go up. I feed them and they don’t throw fits. My Sim can actually sit on the couch and watch some television. 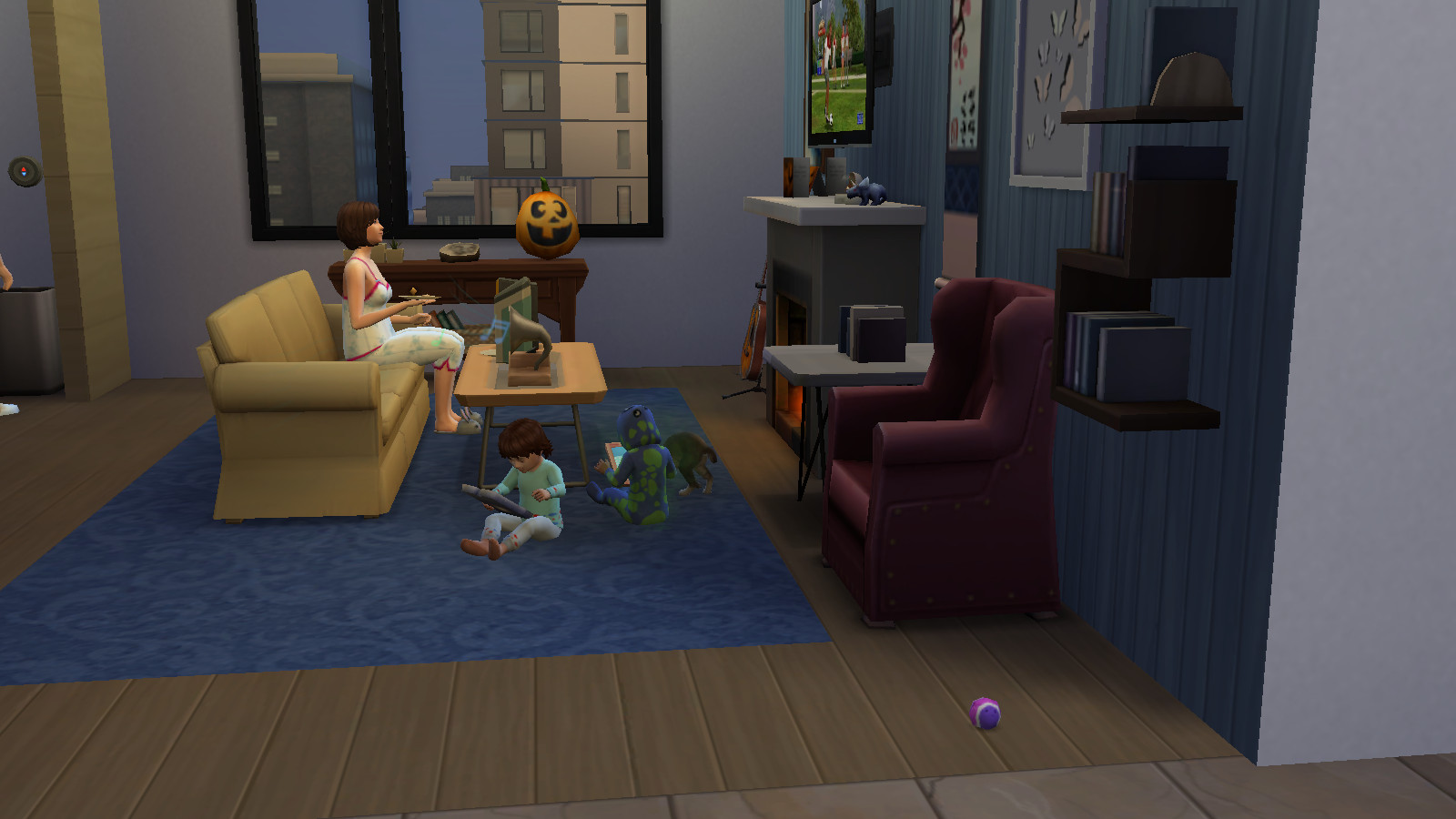 This time around, not only are my kids happier, with skills developing at wonderful speeds, but my Sim and her husband both receive promotions. My Sim even gets one of her books optioned as a screenplay, which catapults her to fame. Their professional lives are stellar! All it took was shelling out 500 simoleons a tablet so that the kids didn’t start throwing fits when I tried to get them to do basic tasks. Aside from feeding and bathing them, my Sim doesn’t even need to pay attention to her kids anymore! The tablet will take care of them for me. I let them play with it for most of the day, while my Sim zings off to work, returns home, works on her side projects, and then plays with her kids for a few minutes, before everyone heads to bed. Peace and quiet at last.

In a virtual world where I control a virtual version of myself, this decision comes easy. After all, as much as I coo over Russett and Amber, the fact is they’re a bunch of pixels on a screen. In the real world, handing tablets out to kids isn’t something done lightly; actual parents debate about screentime a lot. Research is done on this. Everyone has an opinion.

“Taken together, our findings suggest that there is little or no support for the theory that digital screen use, on its own, is bad for young children’s psychological wellbeing,” says Oxford’s study of screens.

“The researchers say that these seem to correlate with young children being more prone to whining, sulking, restlessness, frustration and outbursts of temper,” says the Guardian’s write-up of another. 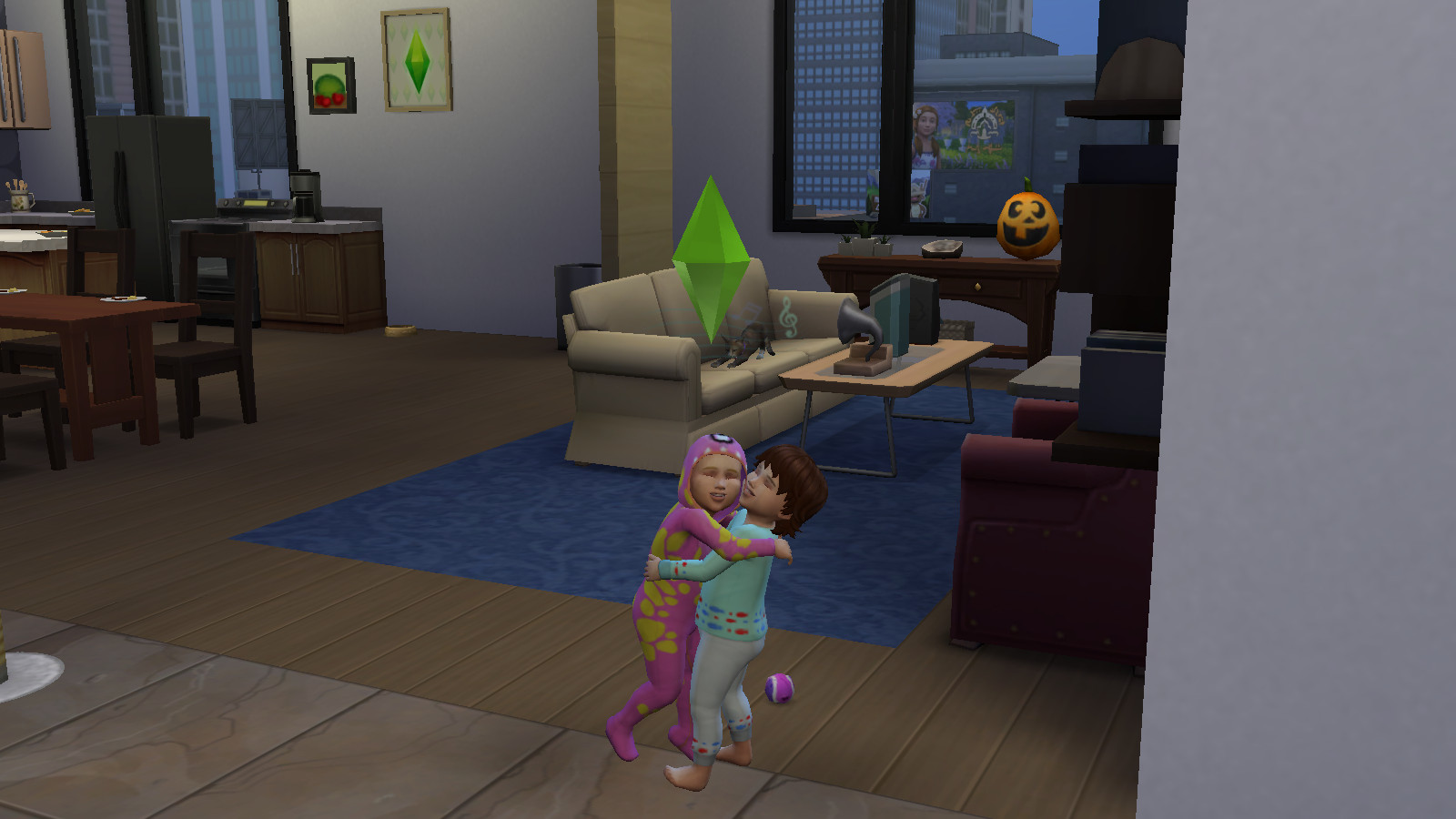 It is a lot of information, a lot of it contradictory, and for a parent actually raising a child, the doubts pile on: should screens be totally banned? Are they okay in small doses? Is it just about the quality of the content? Surely, if my child is only playing educational games and watching educational programming it is better than a kid just streaming “Baby Shark” for 10 hours?

I don’t know about the real answer to any of these questions. What I do know is that in The Sims 4, a big source of my own screen time, indulging your kids’ appetite for screentime is, in fact, the answer.

As the youngest person on the Polygon staff and someone who will not likely have kids in the near future, I feel far removed from the idea of parenthood. I can barely handle virtual kids, apparently, so the idea of actually having to tend to a small being’s needs, wants, and future just sounds completely and totally daunting. At least in the Sims, if things go wrong, I can just exit without saving. Perhaps one day, I’ll be ready for the real-world challenges of parenting, but for now, I’ll be content giving my virtual twins a virtual tablet so my virtual career continues smoothly.

Call Of Duty Modern Warfare; No Fix For Stat Reset Bug Yet

PlayStation Plus Deal: Nab 12 Months Of PS Plus For $37

Pokémon: 10 Legendary Pokémon Memes That Are Too Hilarious For Words