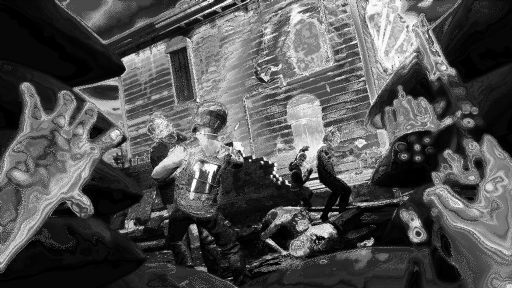 As great as The Walking Dead: Saints & Sinners’ Aftershocks update, it left us eager to hear what’s next for Skydance Interactive’s hit VR game.

As it turns out, the update drops a few hints itself.

Note: There are spoilers for The Walking Dead: Saints & Sinners – Aftershocks in this article.

Once you’ve completed all of Aftershocks’ main campaign, you’ll be left with just one objective – to find a use for three mysterious keys you collected along the way. Actually figuring out what to do with them is tough (but we have a handy guide to help right here).

You end up using them inside one house in the game’s Bastion map. Doing so unlocks a hidden safe room underground. Inside appears to be hints for what’s next for Saints & Sinners.

The safe house has been used by a mysterious new character. We don’t get to meet them, but there is a large mannequin in the room sporting what looks like armor pried off one of the members of The Tower faction. Crazed, cult-like writing is sprawled over some walls talking of wrath and everyone being guilty. In one area is a sprawling map of New Orleans and the encounters this character seems to have had. They also keep a list of others that have either ‘Betrayed’ or ‘Lied’ to them.

Oh, and flip the list over and there’s a category on it for ‘Murderer’. And, yup, The Tourist is written on it. Eek.

A postcard, meanwhile, displays the message: ‘Greetings From The French Quarter’, referencing one of New Orleans’ most historic areas. On the back it reads: ‘See you soon!’

It certainly seems like Skydance is dropping hints for what’s next, then. Could the studio be hinting at a new DLC expansion that introduces this character and the French Quarter area? Or could we perhaps see a full sequel that uses the district as its setting?

Either way, we’ll be keeping our eyes peeled for more.