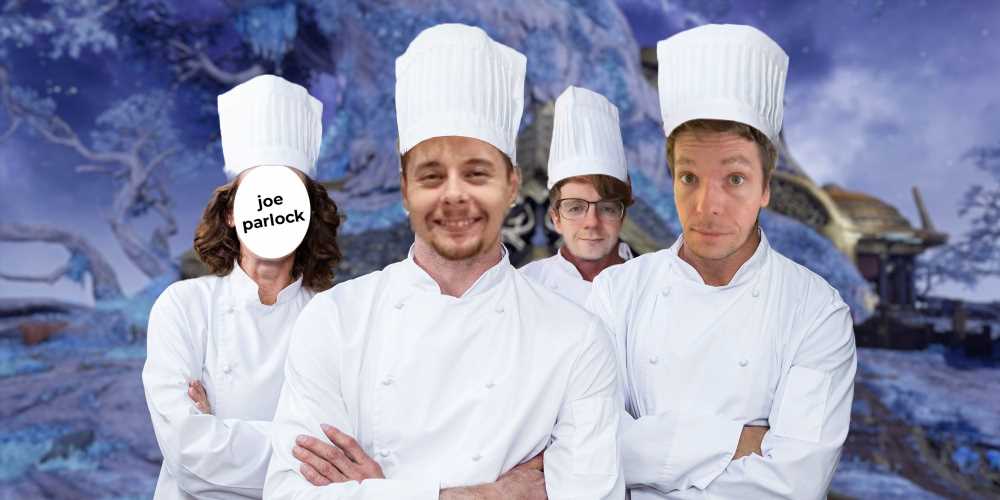 When you think of God of War, you probably imagine Kratos and Thor locked in an intense duel next to a frozen bolt of lightning, or a tender moment between father and son as they figure out the next step of their adventure together. Thanks to the recently released God of War cookbook though, there’s also a chance you picture sausage rolls shaped like Jörmungandr.

Senior News Writer Josh Coulson already reviewed the cookbook closer to its release, but with the Ragnarok hype flowing swiftly through me, I thought it’d be a fun idea to gather some of TheGamer’s best chefs (and me, its worst) to try our hand at making meals fit for a very angry god. 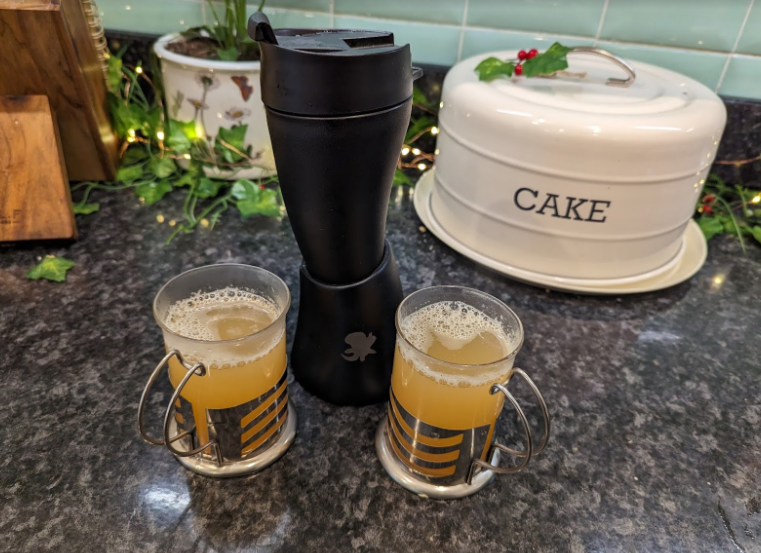 I’d make a rubbish Viking. Not only do I not have a culinary bone in my body, but I’m also allergic to alcohol. With that in mind, I picked the easiest, non-alcoholic recipe – prep time of five minutes, cook time of 20? Instructions that are just “whap all the ingredients in a pan and boil”? Sign me up.

An hour later and I’m dripping sweat into the pan, having learned not only how to peel ginger, but also that you need to peel ginger at all in the first place. I’d grated my fingers and immediately squeezed lemon juice into the cuts, and it was a miracle I hadn’t scalded myself. I also saw what a clove looks like for the first time, which was exciting. They’re so small! 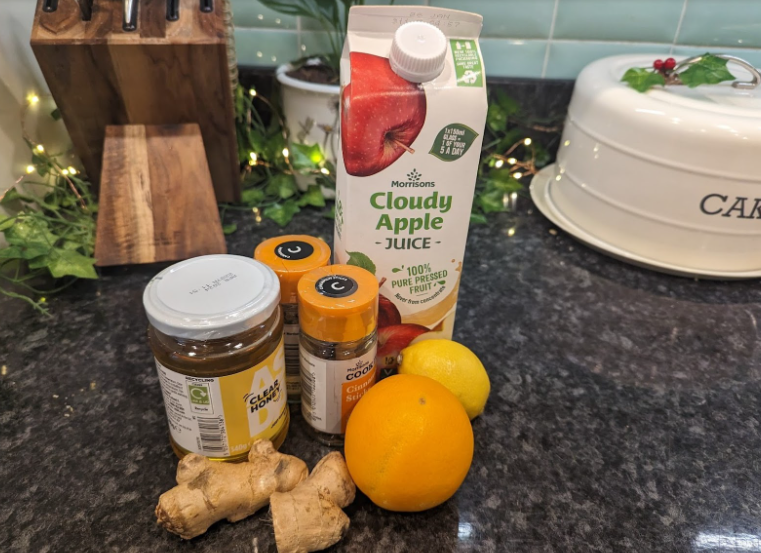 After finally besting this broth of festive smells, the result was something halfway between a Robinsons Fruit Shoot and Covonia cough syrup. Even without any booze, this juice packs a wallop. You could probably water it down a bit, but that didn’t feel very Kratos-y, so I downed the whole thing in one and immediately felt like my chest was burning.

It’d be perfect for a cold day, or when you’ve got the flu and need something to blast your sinuses to Valhalla, but might not be something I whip up on the regular. On the plus side, I finally got to use my Viking drinking horn and learned a nice, Christmassy recipe for the future. Skoll!

Don't panic. When I flicked through the cookbook to decide what I was going to contribute, I didn't know what quite a few of the words above meant either. Full disclosure, even after making it, I still don't know what Yakitori is. I can only assume it's Fire Giant for delicious chicken because that was what I wound up with. Messy to piece together but really easy to make, and probably perfect for a barbecue if you have one and you're not living through what feels like Fimbulwinter right now in the UK.

They weren't the best thing on the plate, though. That award goes to the roasted potatoes. Improving on regular old roast potatoes is not something I previously thought possible, but the Vanir have somehow managed it. The only annoying thing is having to recreate the Jotunn spice mix every time I make them because yes, I will be making them again. The same applies to the blistered shishito peppers, but full disclosure for a second time, I still don't know what a shishito pepper is. I used regular old green peppers and the recipe worked out great.

As someone who previously believed they had some sort of genetic predisposition preventing them from being able to bake anything worth eating, tackling the banana bread muffins felt like a task as tall as the highest peak in Jotunheim. Since I scaled that peak with delicious results, I'm going to brag a little. Not only did they turn out exactly how they look in the book, but they tasted damn good too. Even if you don't think you can bake, give them a try. If I can make a passable banana bread muffin, anyone can. 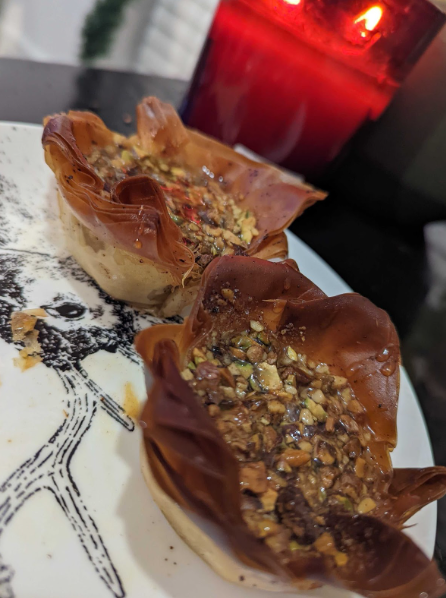 I haven’t played God of War Ragnarok yet, but as TG’s resident baker boy, I had to defend my title. I picked two baked goods to try my hand at, specifically because one of them seemed like a very easy bread recipe and the other a challenge that I’ve never attempted before, baklava. I decided to make these dishes whilst getting rather drunk with my partner and my friend, justifying it by reminding them that the Vikings got drunk all the time, too. I was just on gin and hazelnut liqueur instead of rum.

The aish baladi, an Egyptian flatbread, turned out really well. It was a little denser than I usually like but still nice, and goes well with some olive oil for dipping. Like Josh’s banana bread muffins, I’d recommend this for starter bakers as it’s a pretty foolproof bread recipe that also has a little pizzazz with the addition of the wheat germ rolled right into it.

What I wouldn’t recommend for beginners is the baklava. Filo pastry is a bitch to work with at the best of times, but delicately shaping it into individual cups when you’re three sheets to the wind is a challenge worthy of the gods. At least, that’s what I tell myself. These turned out pretty great, though – walnuts and pistachios just work really well together, and there’s more than enough sugar to satisfy a sweet tooth.

Making them into little tarts instead of a huge sheet that you have to cut into delicate little squares makes them perfect dessert-size treats, too. One thing I will say, the recommended syrup recipe is far too heavy on the lemon and made the tarts quite a bit more sour than I was expecting, so I’d cut the lemon juice in half or even a quarter if I was to make these again. Overall: a great recipe and a fun new way to serve a classic treat. 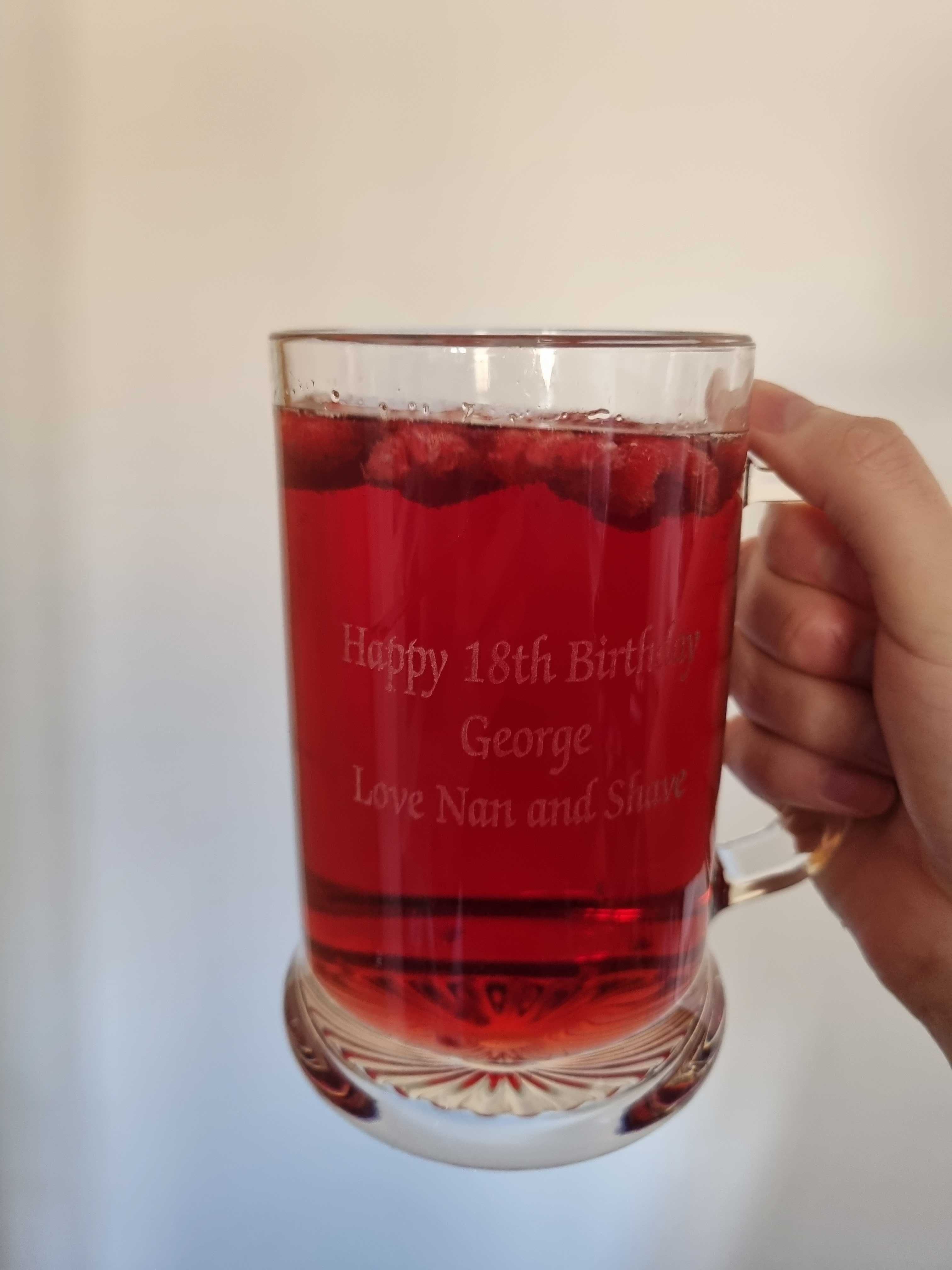 After everyone else’s Herculean efforts above, it feels like a bit of a cop-out to go for one of the easier recipes in the cookbook, but considering my diet mostly consists of turkey dinosaurs, fast food, and energy drinks, I thought it best not to complicate things too much. Unlike Joe, I also drink quite a bit, so my eyes were instantly drawn to Vanaheim’s Ambrosia, which combines champagne with pomegranate.

I made a few changes to the recipe, replacing the pomegranate seeds that are supposed to sit in the bottom with raspberries, mostly because that’s what I had in the fridge. I’m not huge on pomegranate anyway, so adding the raspberries balanced the flavour out a little bit. I also probably included too much champagne, but I’m not exactly complaining about that.

The end result was incredibly sweet and a little sickly, even for someone who unashamedly likes Strongbow Dark Fruits. The biggest issue was that it didn’t really taste like alcohol at all, meaning that I drank it like juice and ended up regretting it. It was nice, though, and well worth giving a go, even if there’s a bit too much setup for my liking.