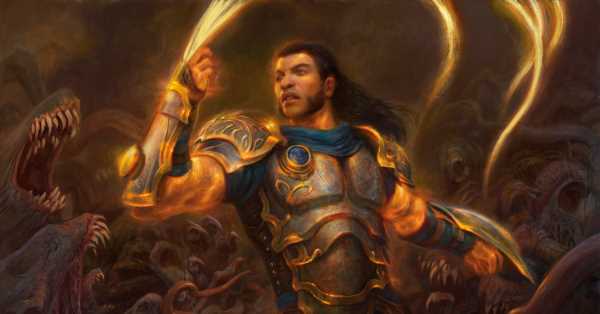 Netflix’s Magic: The Gathering animated series will premiere in the second half of 2022, and it will star Brandon Routh (Superman Returns) as Gideon Jura. The announcement was made Tuesday during the Magic Showcase 2021 streaming event.

Daniel Ketchum, Wizards of the Coast’s principal designer for franchise development, was on hand to deliver the news. He said that all scripts are currently final, and the full first season has been recorded by its principal voice actors. He added that the series will be perfect for dedicated fans of the larger Magic narrative, but for newcomers, will require no prior experience with the franchise to enjoy.

A prequel novel is on the way from Penguin Random House, coming alongside the animated series.

“It’s going to tell the story of Gideon Jura and Jace Beleren,” Ketchum said, referring to the unnamed novel. “How they met. We’ll get to see them road-trip through the multiverse, right some wrongs. We’ll also see where their relationship goes sour.”

Gideon and Jace are planeswalkers, powerful spellcasters in the world of Magic: The Gathering. Gideon notably died in the fiction during the event known as the War of the Spark. His final moments were recorded in the novel War of the Spark: Ravnica by Greg Weismann (Gargoyles, Star Wars Rebels), and in an exclusive set of cards known as a Signature Spellbook.

Brothers Joe Russo and Anthony Russo (Avengers: Endgame) were originally scheduled to adapt Magic: The Gathering for Netflix, but broke with the studio over creative differences. Jeff Kline (Transformers: Prime) has since taken over the project, as first reported by Deadline.