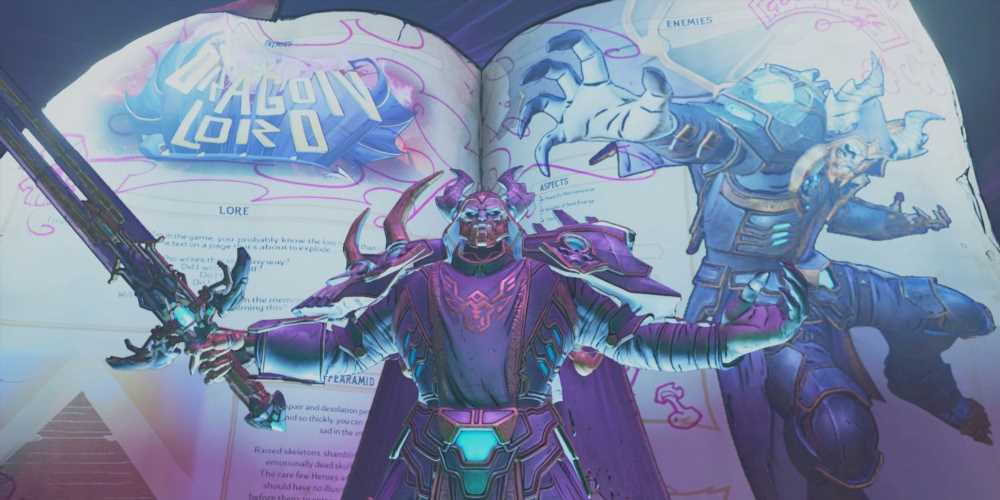 Every moment of Tiny Tina's Wonderlands campaign has led you up to this moment. It is time to defeat the Dragon Lord, and take the Wonderlands' fate into your own hands. Being the very last boss fight of the campaign, not to mention Tiny Tina's first-ever creation, the Dragon Lord fight is undeniably a difficult one. This boss combines every element from previous fights and throws them at you faster and harder than before.

With the right roster of weapons, knowledge of the Dragon Lord's different phases, and a sprinkling of persistence, you can conquer the Wonderlands' final boss and live up to your title as Fatemaker.

Finding And Preparing For The Dragon Lord 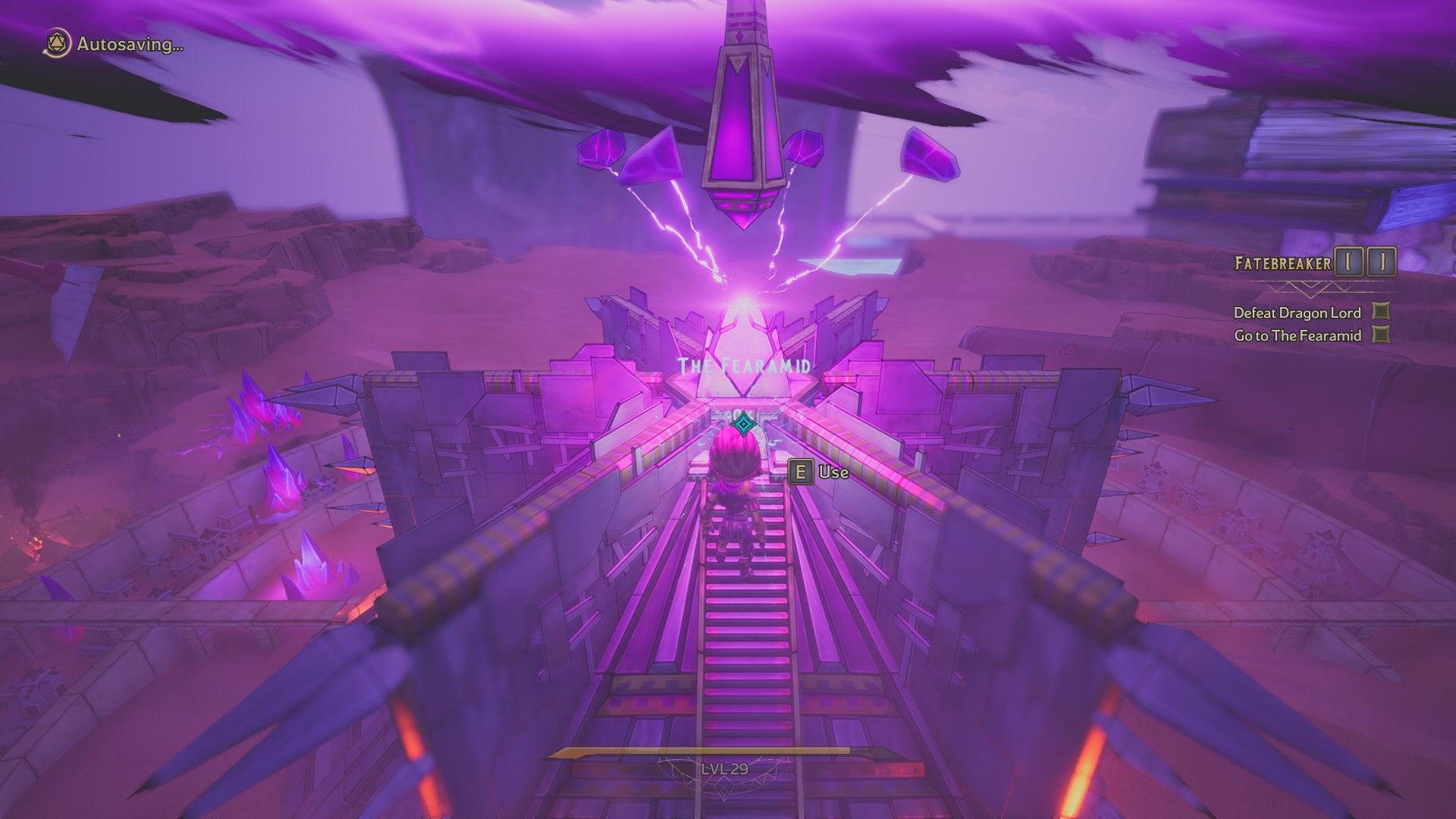 The Dragon Lord can be found at the very end of the Overworld, in the Fearamid area. This area is only unlocked after completing the Ossu-Gol Necropolis area and obtaining the Fatebreaker quest. However, you cannot access the Fearmid until you are at least level 28 or above, as the enemies in this area are all level 30.

Before you reach the Dragon Lord, you must first battle your way through the Fearamid. First, shatter the two crystals in the Ruling Core, and cross the Catwalk to Obliteration to reach the third crystal. After destroying the generator (and Bernadette’s soul) in the Soul Collection Nexus, you just need to reach the top of the Fearmind and enter the Crest of Fate.

Take a moment here to restock on ammo at the vending machines. Weapons and spells that deal Lightning Damage, Poison Damage, and Fire Damage are ideal for this fight since the Dragon Lord is weak to these elements in certain phases. A weapon that does Dark Magic damage (aka Restores Health via Damage) is a great pick for this battle as well since it is effective against pretty much every health bar. Plus, health potions may become scarce towards the end of this fight.

How To Defeat The Dragon Lord 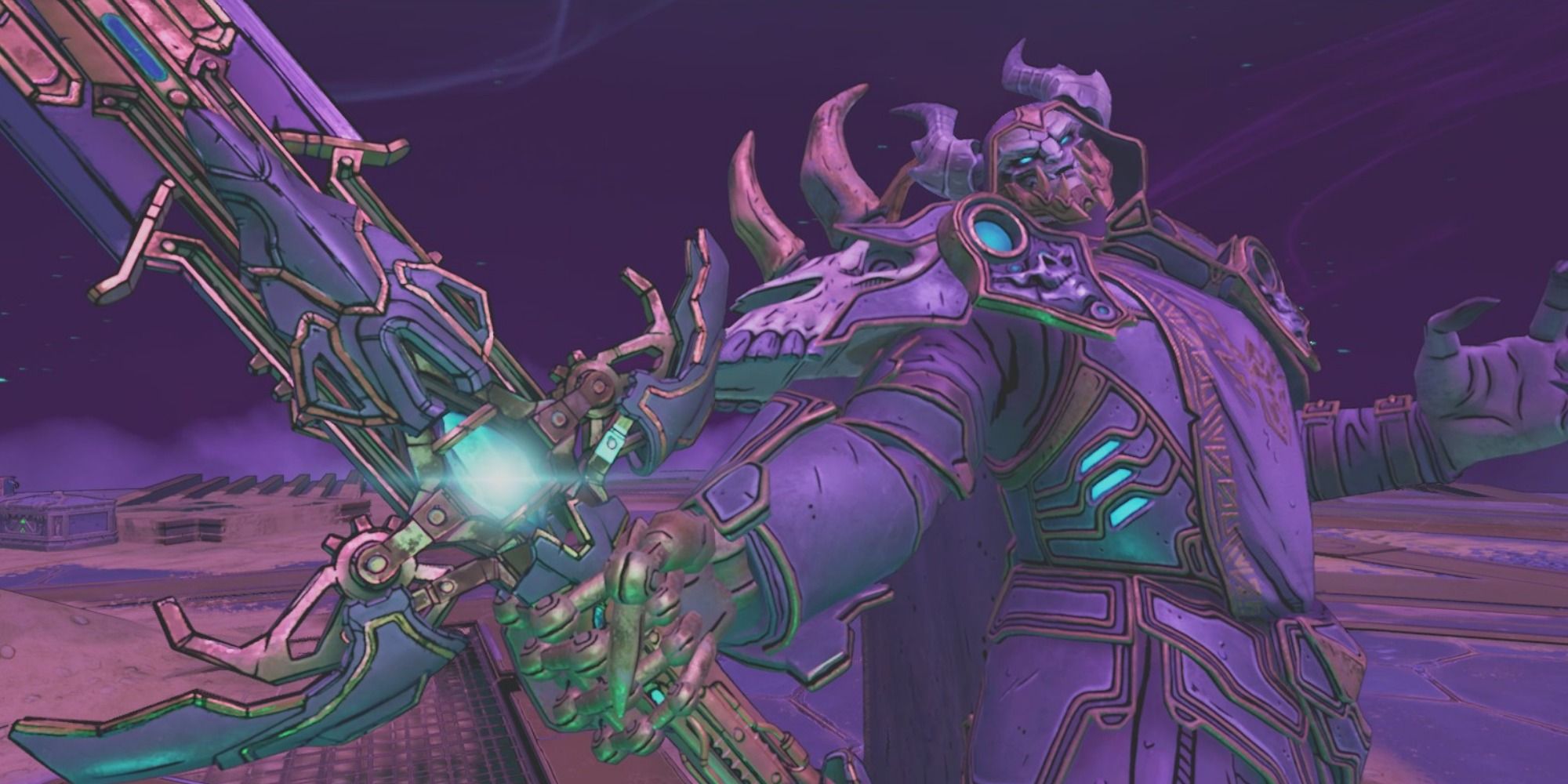 This boss fight is particularly tough sheerly for the amount of stuff it throws at you all at once. Spawning mobs, projectiles, area of effect spells, you name it. Your best chance at besting the Dragon Lord is to swap between weapons and spells that are most effective against the health bar of his current phase, and simply learn his attack patterns. Also, remember your training, Luke. Every boss fight you have tackled in the Wonderlands before has prepared you for this one. 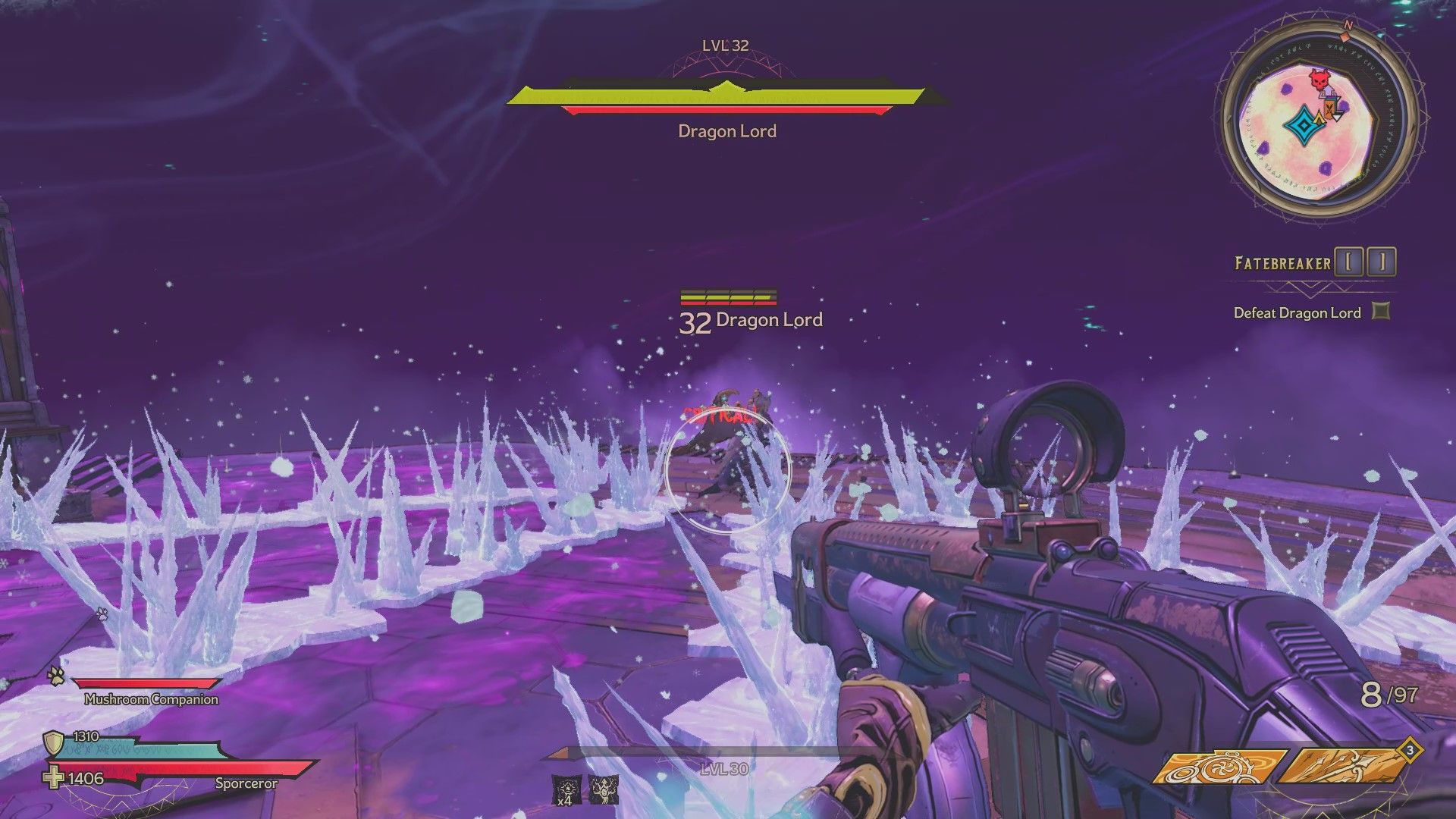 During the Dragon Lord's first phase, he will teleport around the Fearamid casting a variety of different spells and summoning swarms of Skeleton mobs. There are five total attacks he uses in this phase. 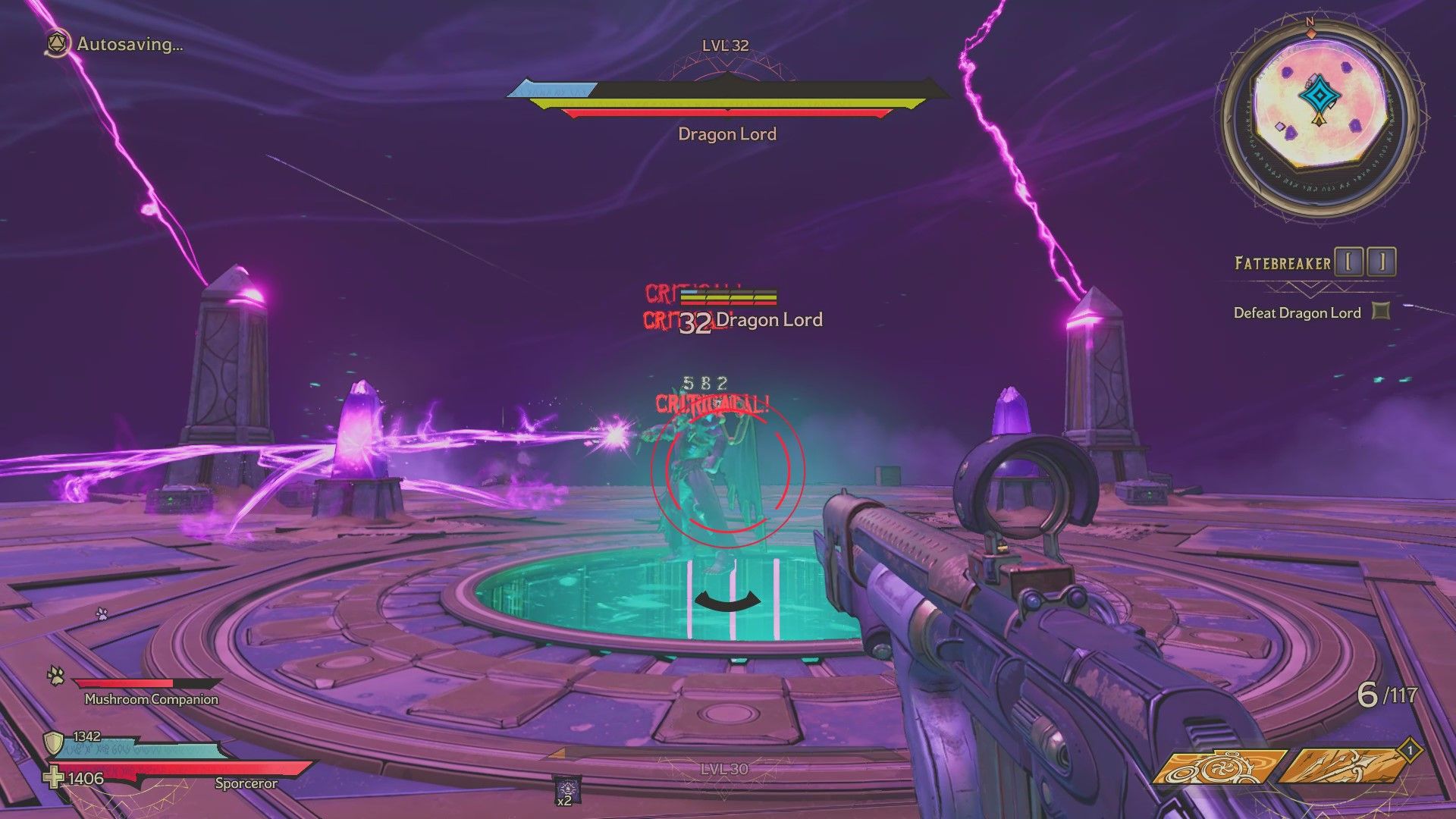 In addition to all these attacks and the mobs of Skeletons that come after you, the Dragon Lord will also occasionally cast a beam of void energy that connects with one of the inactive Void Crystals around the arena. When he does this, the Void Crystal will become empowered and spawn a puddle of void energy in the area surrounding it, which will sap the life from you if walked over. If you let too many Empowered Void Crystals get activated, eventually the whole arena will be covered in a void energy puddle. Break these swiftly to avoid losing ground.

Open up as many chests as possible during this phase, so that later you can run by them to automatically pick up Health Potions as needed. 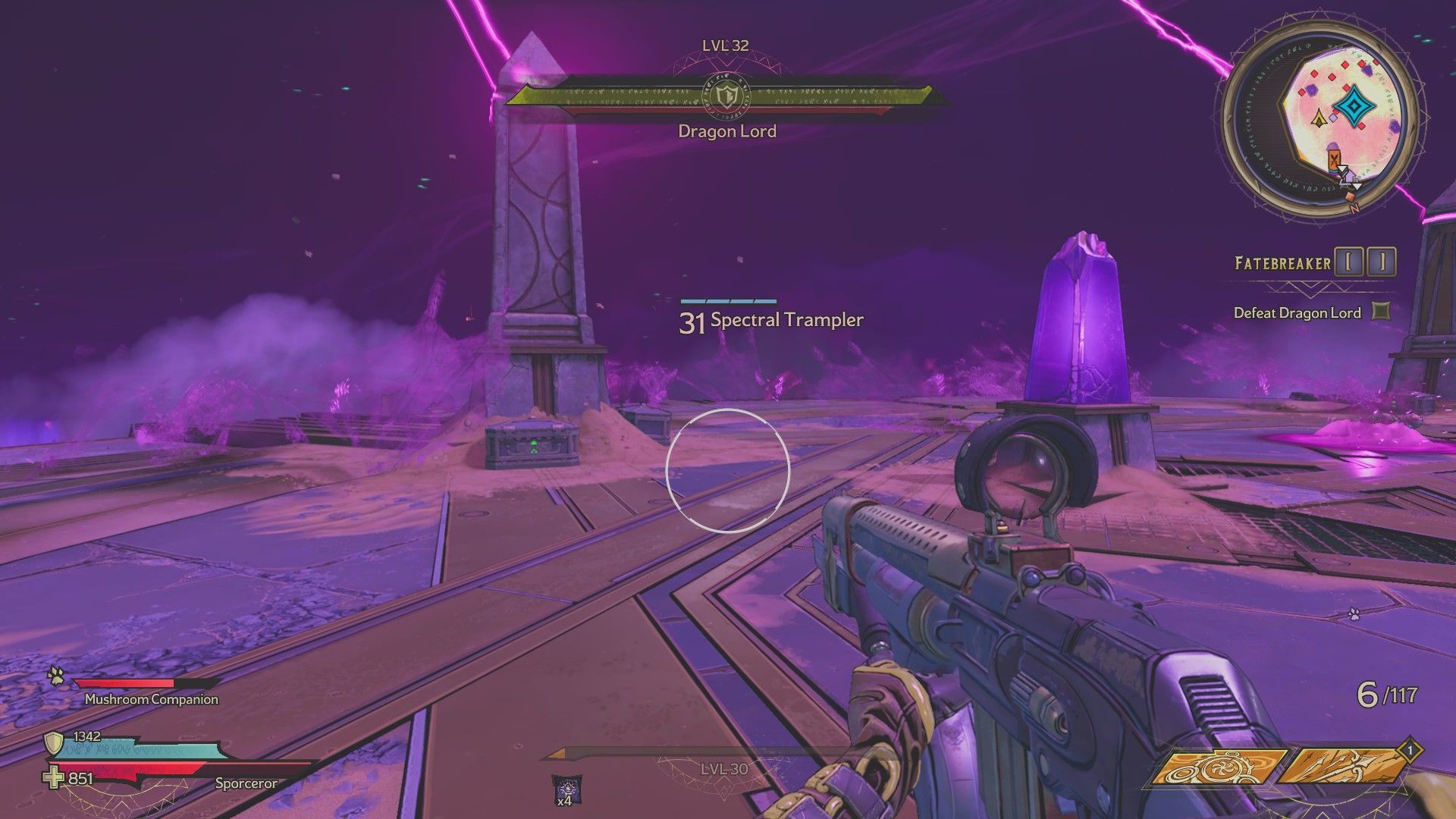 Once you crack through the Dragon Lord's Ward, he starts mixing things up a bit. On top of summoning Skeletons, and all the other attacks he threw at you in Phase 1, now he can also summon a wave of Spectral Tramplers that will charge across the arena in a straight line.

Getting hit by one of these will likely break your Ward straight away. It can be tough to spot these mobs since they are the same color of purple as the rest of the Fearamid. You can jump over the Spectral Tramplers if you find the right spot between their wings, but they can also be killed if you shot through them quickly.

Spectral Tramplers only have Ward, making them weak to Lightning damage. 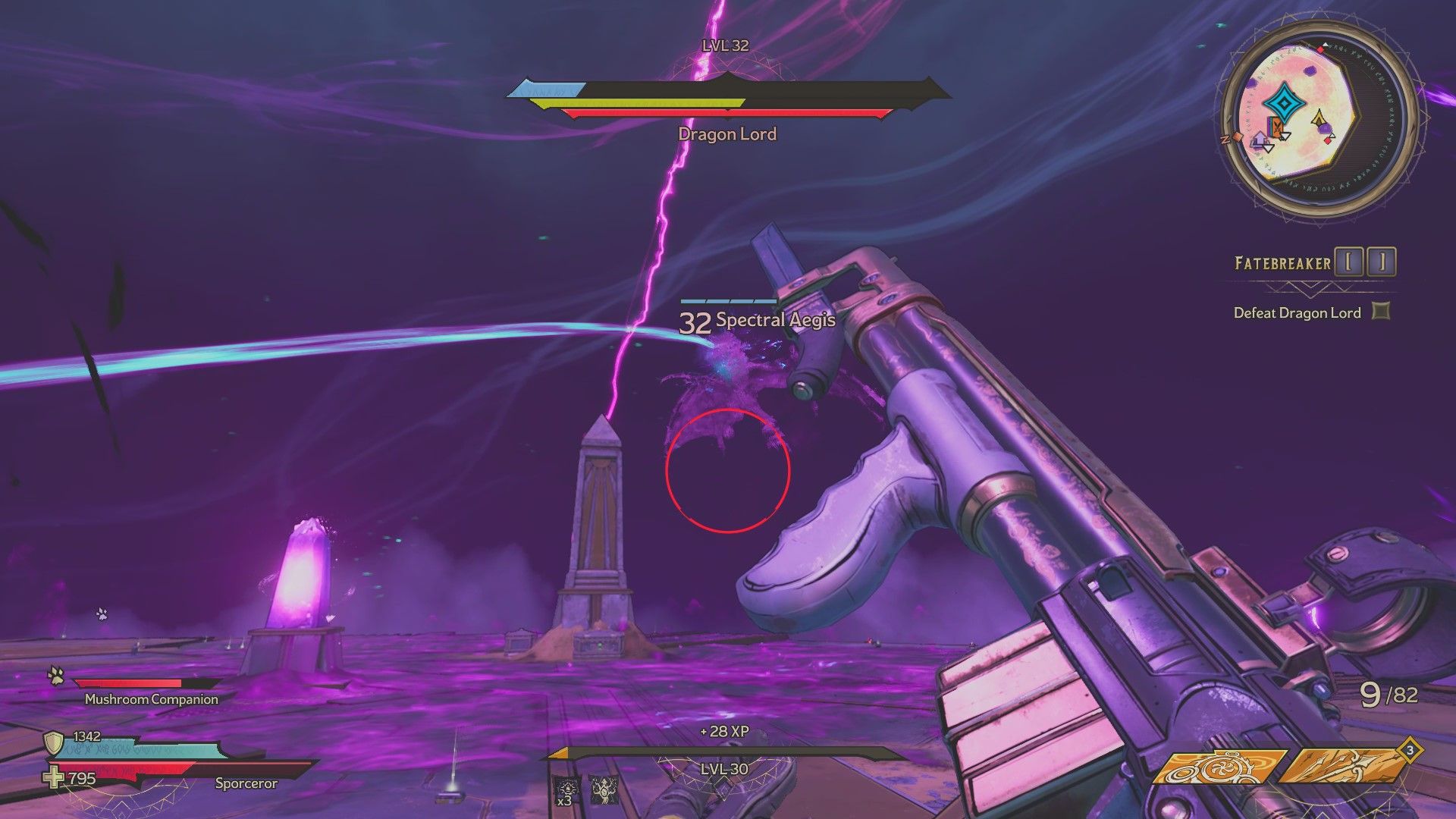 If that was not enough, the Dragon Lord will attempt to regen his Ward by summoning a bunch of Spectral Aegis dragons that fill his blue bar back up. If you notice streams of blue-purple energy stringing out from the Dragon Lord, follow them to each of the Spectral Aegis connected to him and shoot them down swiftly. 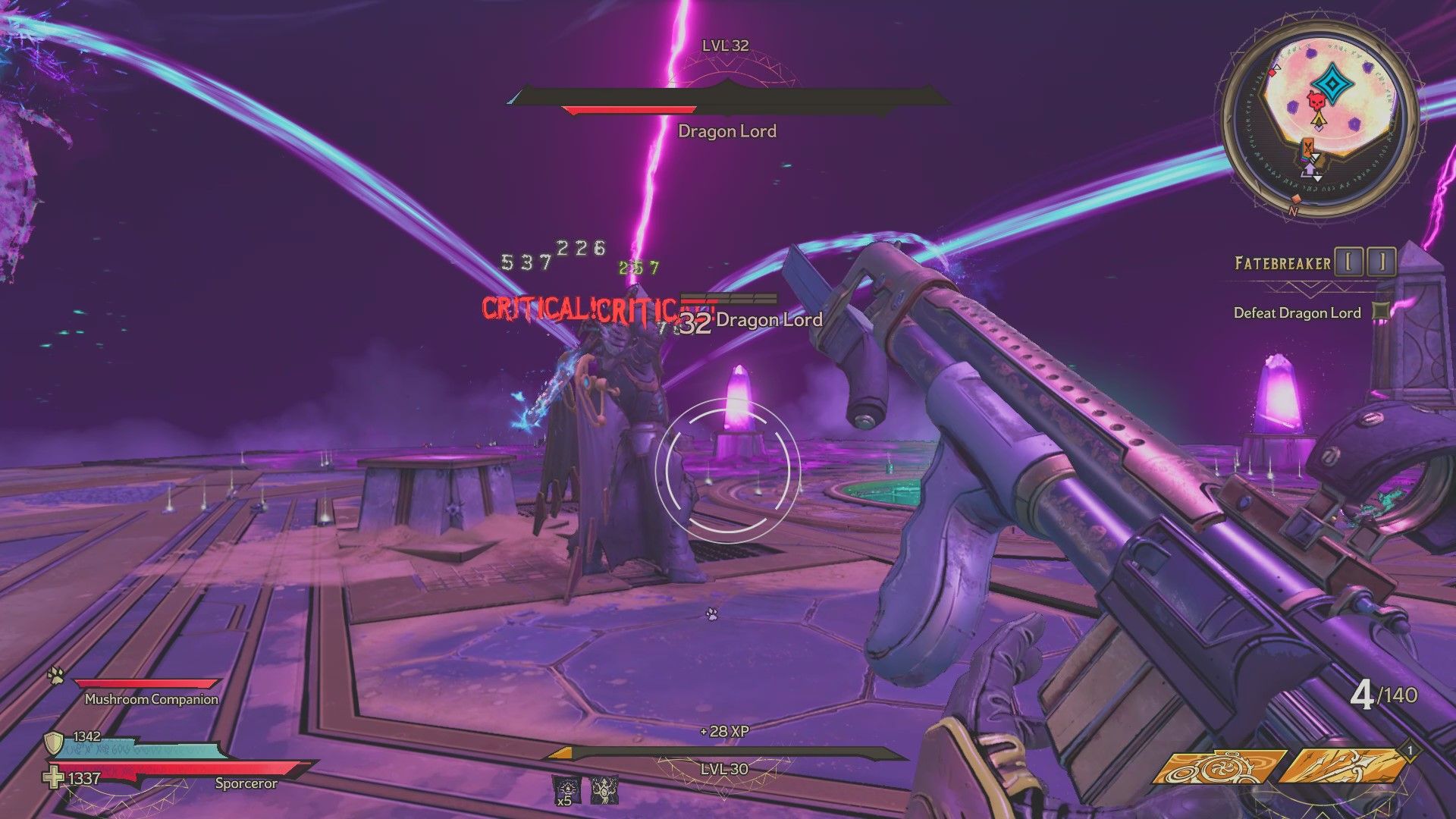 Once you have the Dragon Lord down to his red health bar, he will simply begin to toss all of the above at you even more rapidly, teleporting around the arena more frequently now. Keep on your toes and do not let the Spectral Aegis dragons refill his Ward all the way. 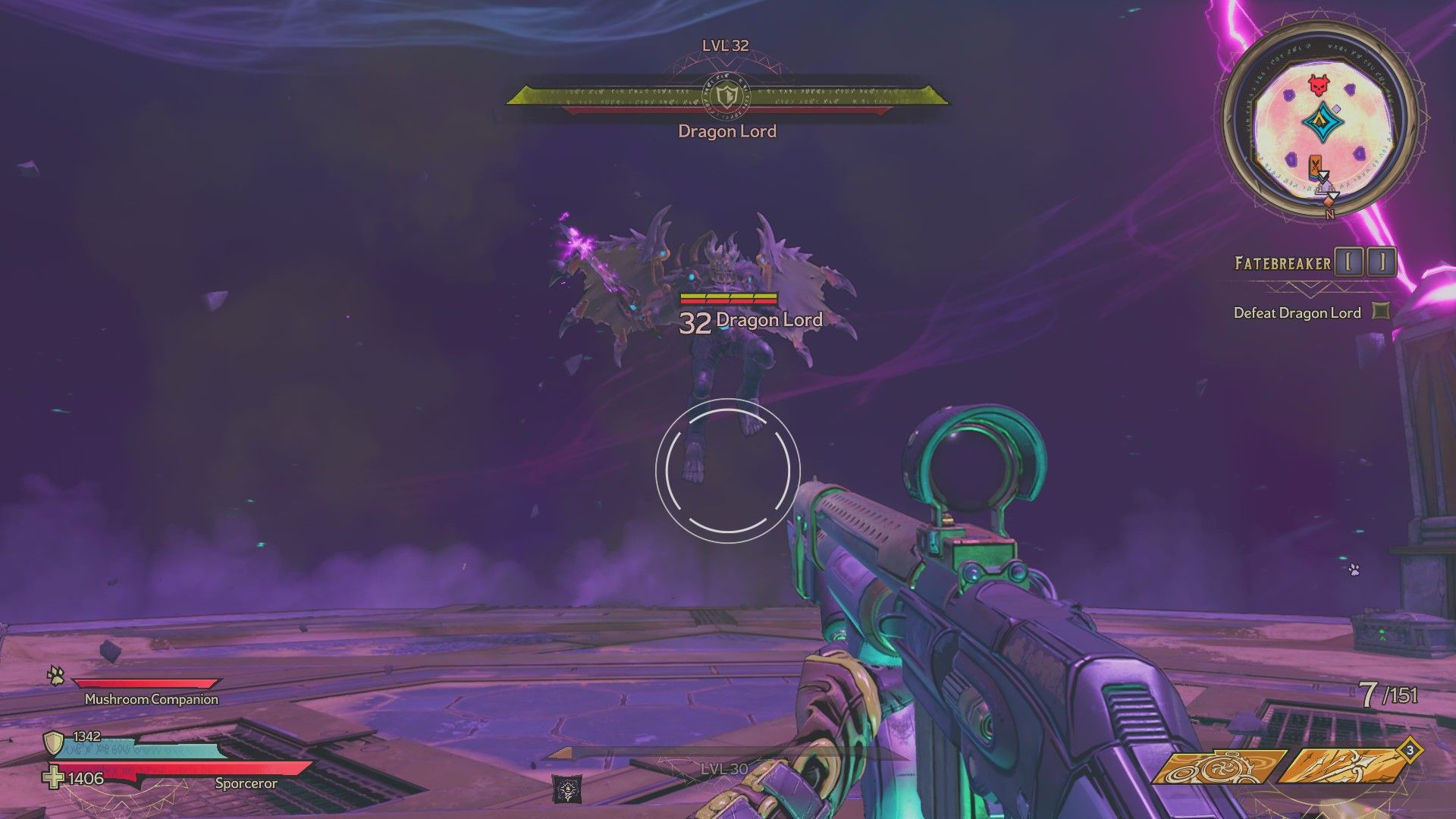 Oh, you thought this was going to be a three-phase boss fight? Psych! The moment you delete the Dragon Lord's red health bar, giant skeleton hands clap around him, making him immune to damage before pulling him below ground.

Now the Dragon Lord can fly and summons Reanimated Wyverns that can breathe fire. Yup. In addition to this, he now has four new attacks.

The Dragon Lord can also still throw some Phase 1 attacks at you during this time. The key to this phase is to constantly be on the move. If you are more of a melee-focused class or do not have a companion to take the brunt of the aggro for you, it might be a good idea to stand back and take more shots during this phase to avoid his Sword Slash. To avoid the Ground Pound attack, as soon as you spot a puddle of Lightning damage forming around you, run immediately to avoid getting struck. 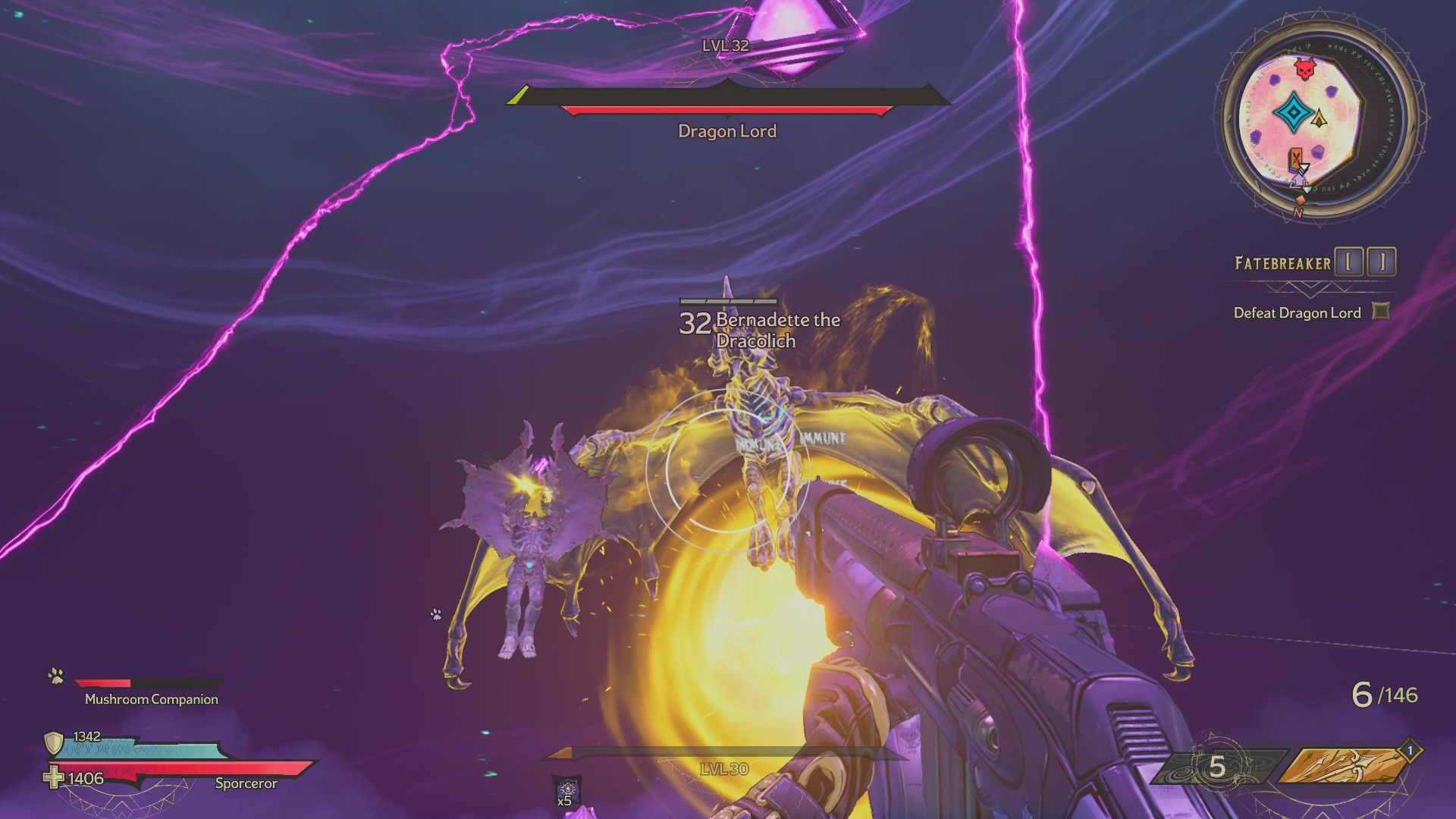 Now that you have gotten the Dragon Lord down to his red health bar (again), it's time to meet the real Bernadette. The Dragon Lord summons Bernadette the Dracolich to the fight, and like the Reanimated Wyverns, she can breathe fire down on you, but in a much bigger way. Bernadette will also fire two bolts of golden damage at you from her wings. All of the Dragon Lord's previous attacks are still active during this phase as well.

Stay on the move, keeping both Bernadette and the Dragon Lord in your periphery. The Dragon Lord will attempt to connect to Bernadette to regen Armor several times. Once you kill Bernadette, all you have to do is chew through the Dragon Lord's remaining health bar. Do so, and you will have truly earned the title you have already been given: Fatemaker.