Licensed board games present an additional challenge to game makers. In addition to crafting a compelling gameplay loop, nailing balance, and offering art and components that cry out to be played, the best games built around existing franchises must somehow speak to what makes that setting and fiction so memorable to its fans, and somehow loop those elements into the gameplay, presentation, and the feel of turn-to-turn play. If the franchise in question is Star Wars, years of other toys, games, cartoons, movies, comics, and novels must also be factored in, and each can either be a tool for enriching the game, or a path to feeling like a retread.

While there are plenty of reasons to check out Fantasy Flight’s new Star Wars: Outer Rim, it’s the way that the game taps into a very particular corner of the Star Wars universe and nails the bullseye that is most impressive. This is the Star Wars anti-hero fantasy writ large across the gaming table, where Han Solo might pull off a job to save his hide from the Hutts, Boba Fett could hunt down an escaped rebel, and Lando Calrissian is likely to impress the ladies with the insane luxuries available aboard his souped-up ship. Filled with emergent moments of narrative, fast-moving battles, and a galactic rim that grows more dangerous with each passing turn, the latest Star Wars board game has plenty to offer dedicated fans who like the shadowy aspects of the lore.

Dripping in the underworld vibes of that galaxy far, far away, Outer Rim plays like the counterpoint to Fantasy Flight’s earlier (and excellent) Star Wars: Rebellion. That was a game about retelling the sprawling Galactic Civil War, with grand fleet battles, Death Star planet-destroying, and heroes like Luke Skywalker turning the tide of the conflict. In contrast, Outer Rim is a personal game; the stakes are about whether you can bring a character like Boskk or Jyn Erso to notoriety, and keep them alive long enough to scrounge up a new ship. It’s about whether you’ve got the influence to talk down that syndicate thug, or the knowledge to break in and steal the goods from an abandoned underwater temple. It’s also a game about petty backstabbing and politicking, where you might turn in your own crew for a bounty payout if it means eking out a bit of favor with the scrappy Rebels or the authoritarian Empire.

One to four players can tackle a game of Outer Rim in a single sitting. The included solo game rules are great for learning the flow of play (pitting you against an AI card deck), and I’m impressed with the balance work on display in that mode. However, the interplay of multiple characters is undoubtedly the best way to go, and if you have the three-plus hours to spare to get through a complete playthrough, a full four-person complement shows the game at its best. With more players, there’s more competition for the best ships, faction patrols are more active, and it’s just fun to see all these familiar characters zipping between planets like Tattooine, Lothal, and Nal Hutta, as each iconic hero confronts new story moments, familiar character cameos, and sudden battles.

The first thing you’ll notice about Outer Rim is its board, which takes the game name to heart. The semi-circle arc of playspace depicts planets far from Coruscant, and the hyperspace corridors that interconnect them. Taking a cue from other strong narrative-focused Fantasy Flight board games like Arkham Horror, Outer Rim relies on several location-specific card decks to get across its storytelling. Zip down to Cantonica, and you’re likely to face an encounter at the same casino we visit in Episode VIII. Drop off cargo at Mon Calamari, and your encounters are sure to take you into that world’s deep oceans. These read-out-loud story snippet encounters are usually resolved through simple skill tests using the included custom dice. Crewmates you’ve gathered bring their own skills to those tests, dramatically increasing your chances at success, and motivating you to pull fun NPC characters into your adventure, like Chewbacca or Maz Kanata.

More often than not, those crew members join up as you run into them across the rim, as each planet has a random set of contacts to uncover, represented by initially hidden tokens. Maybe you want to pick up Greedo to add his stealth skill to your bag of tricks, but another player may have a bounty for Greedo. If you find his token first, is the slow-on-the-trigger green guy worth the trouble he might bring you? 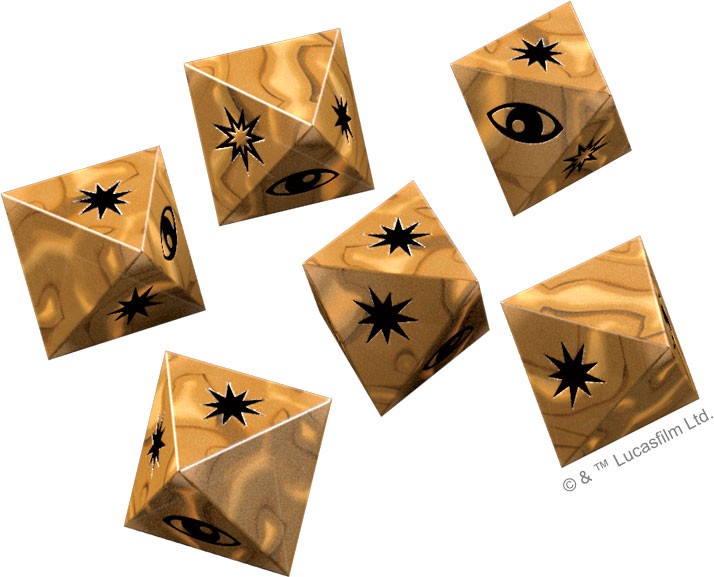 The location-specific encounter cards and the mysterious identities and run-ins with contacts combine to communicate a sense of organic and emergent story, like an unfolding TV series with a number of competing plots, where the ensemble cast frequently faces their own dramas, but occasionally crosses each other’s paths. The sense of investment in the fiction is accentuated by your choice of character, each of whom brings different abilities to the table that evoke their traits in the canon. Boba Fett is better at tracking down bounties, while Han Solo manages to eke out a bit more speed from every ship he pilots.

Outer Rim also relies on several market decks that represent everything from the jobs you might take on to the luxury items with which you aim to impress the other bounty hunters. There’s a constant ebb and flow between the need to complete cargo deliveries (some of which are lucratively illegal) and other jobs so you can get some credits, and the necessity of regularly advancing your personal fame through more challenging tasks, as that’s the route to game victory. Fame comes from a number of sources, including bounty completions (which can be turned in dead or alive, in most cases), winning combat against patrols of Rebel, Imperial, Syndicate, and Hutt ships, and even through purchasing especially swanky items like a Dejarik Holotable or a gift for the illustrious Jabba. I also like that both your main character and the ships you buy have personal goals that may be completed, both to gain fame and improve that element of your character. It might start as a modified YT-13000 freighter, but put in some work, and that hunk of junk becomes the Millennium Falcon.

Fame may also be acquired through jobs, which tend to be more elaborate encounters that involve multiple skill checks. I love the short mini-adventures that jobs entail, like stealing the Jewel of Yavin, pulling off a rescue from the mines on Kessel, or hijacking a freighter. But I was disappointed in multiple game sessions that it’s so hard to actually complete these jobs early on in a game. Because they involve multiple skills, it’s awfully hard to pull one off in the early to mid-game, so these exciting encounters often only become viable in the last third of an evening of play. 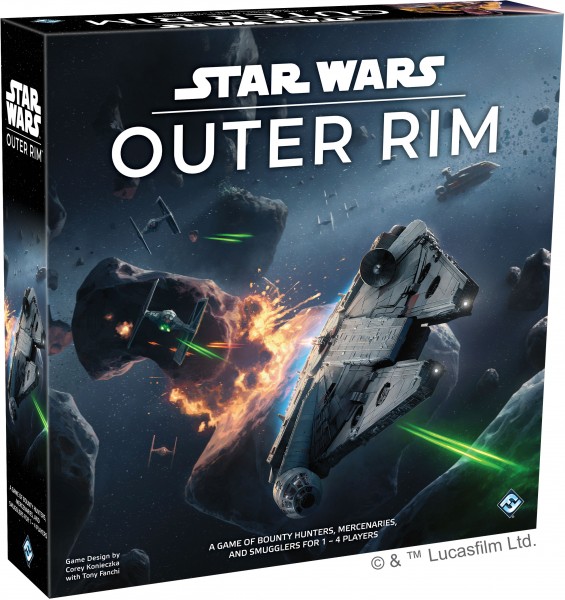 As contacts are revealed, patrols race across the rim, and the pace of the game accelerates, just like a Star Wars adventure should. Combat encounters and skill tests are simple and keep the flow of play moving at a brisk pace, but they also make the whole affair feel a bit swingy. In another game, that might bother me more, but here the fun is more about seeing everyone’s character stories play out at the table than enacting and seeing some especially grand strategy finally pay off. The large number of card decks and tokens are pretty par for the course from big Fantasy Flight releases; they look great, and contribute to a better game, but it also means that setup and teardown can take some extra time.

Star Wars: Outer Rim hits the sweet spot for its theme of exploring the underworld of the Star Wars universe, and that’s what counts the most. Again and again, I found myself chuckling at clever appearances by minor characters, or subtle nods to particular storylines hidden away in an encounter. The art is and presentation is top notch, instructions are clear and smartly organized into separate “learn to play” and “rules reference” books, and while a single game with four players can run long, the straightforward turn structure keeps anyone at the table from experiencing too much down time. If the Mos Eisley cantina, Jabba’s Palace, or Maz Kanata’s castle were some of your favorite haunts in the movies, this is a game that nails the tone of those scenes with aplomb. I’d be hard pressed to imagine a much better structure for bringing this particular theme and setting to life, and I suspect fellow fans will feel the same.

Star Wars: Outer Rim should be widely available for purchase in the coming weeks, but if you’re looking for other recommendations for your game night, there’s no shortage of ideas available on the Top of the Table hub, reachable by clicking into the banner below. As always, if you’d like more personalized recommendations for board games, let me know in the comments or by email, and I’ll offer up some ideas.