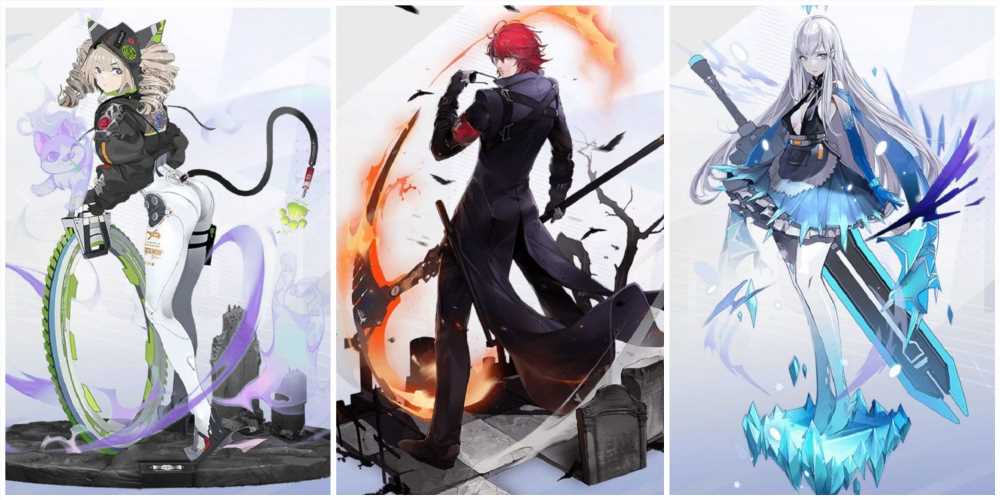 Tower of Fantasy is an sci-fi, open-world MMO set in the post-apocalyptic world of Aida. The game has a lot in common with the megahit that is Genshin Impact, including an anime-inspired art style and gacha-based unlock system, but ToF stands out for its unique approach to character customization and combat.

During your adventures in Aida, you’ll unlock special AI entities known as simulacra. Not only do these powerful beings give you access to SR and SSR weapons — which can be upgraded and enhanced more than R weapons can — but they also come with their own unique storylines and character appearances.

In this article, we refer to each simulacra as a “character,” but it’s important to keep in mind that simulacra appearances are completely optional in Tower of Fantasy.

You can gain each simulacra’s abilities and powers simply by equipping their weapon. 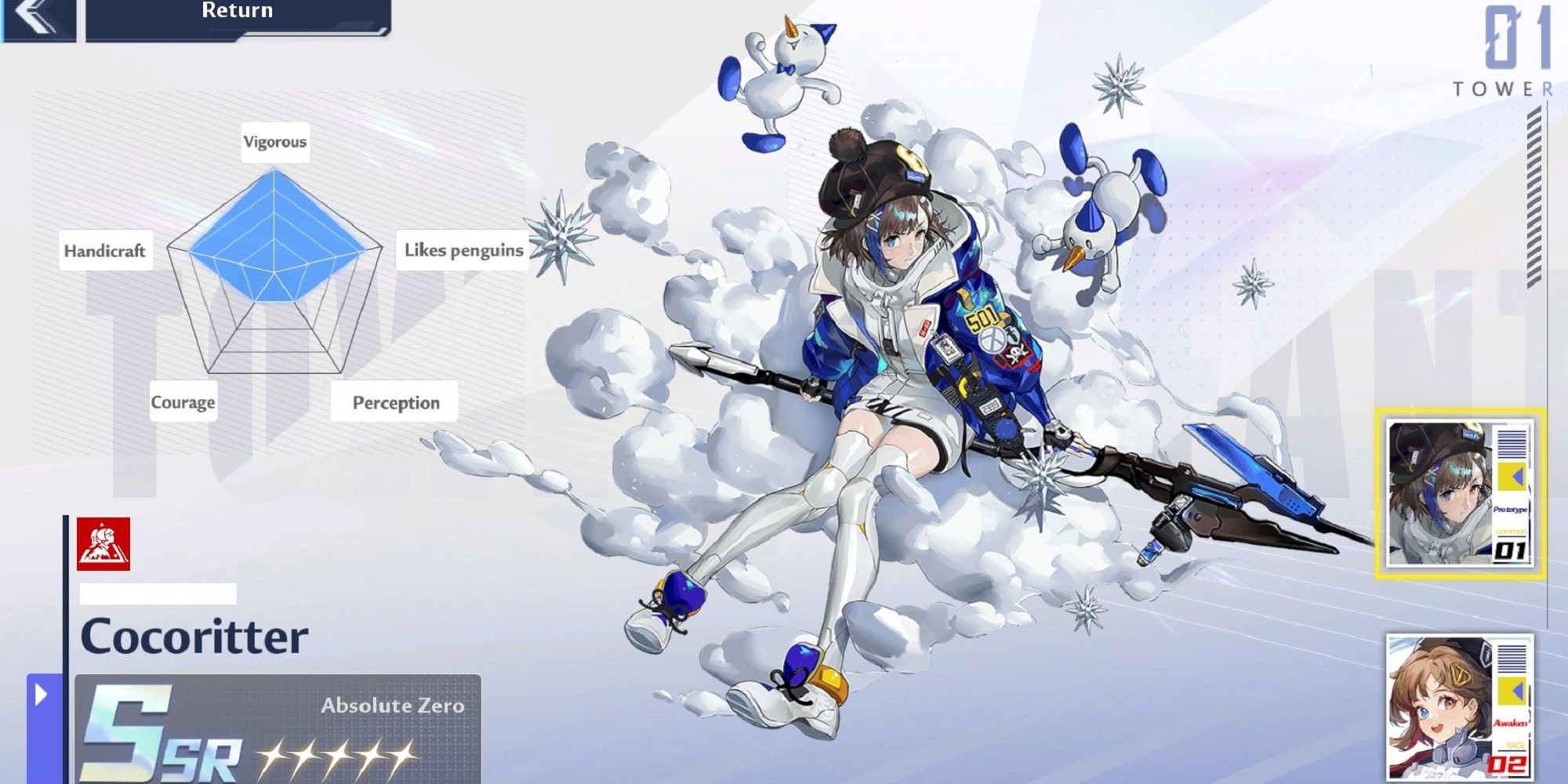 If you enjoy playing support-type roles, Cocoritter has the best healing throughout in the game, making her a great pick for group gameplay. She comes with an ice-based staff called Absolute Zero that freezes enemies in place and improves your healing capabilities.

Her awakening traits include Assistance and Trust, which increase your healing effects and buff nearby allies' attack power by 15 percent when you use a discharge or weapon skill. Cocoritter can also remove annoying debuffs from both yourself and your party members once you get her third advancement. 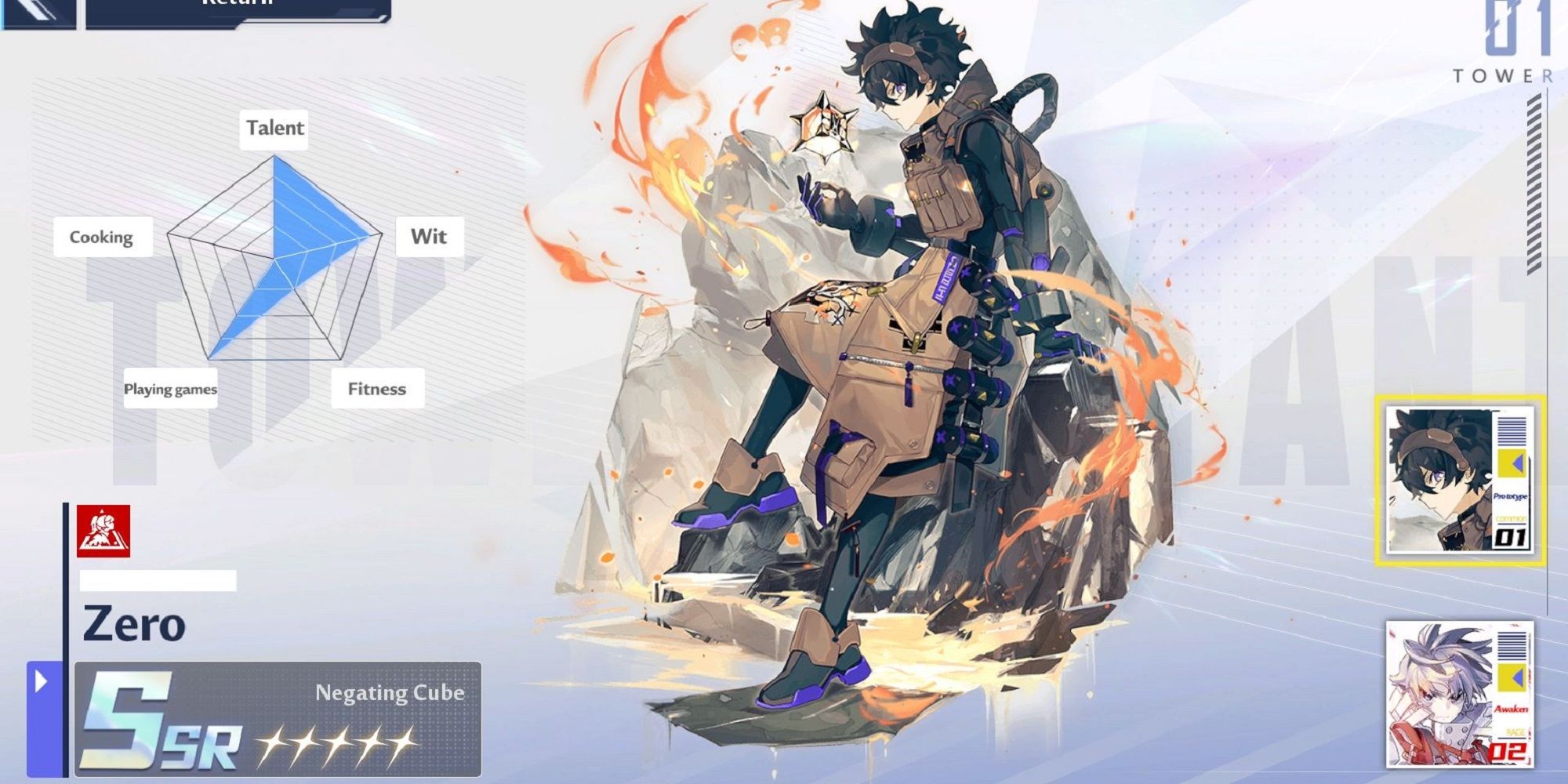 Zero should be used primarily as a support in groups, but because the Negating Cube weapon skill provides damage absorption, he’s a decent pick for solo play as well. His awakening traits are Accurate Calculation and Overall Planning, both of which reduce the remaining cooldowns of your used relics whenever you activate a weapon skill.

While his weapon skill and discharge abilities make Zero pretty useful even without any upgrades, his role as a support- or healer-type character is enhanced with advancements. His first advancement provides your group with useful healing orbs, while the third one cuts your weapon skill cooldown in half, and adds a convenient healing effect to your damage absorption ability. 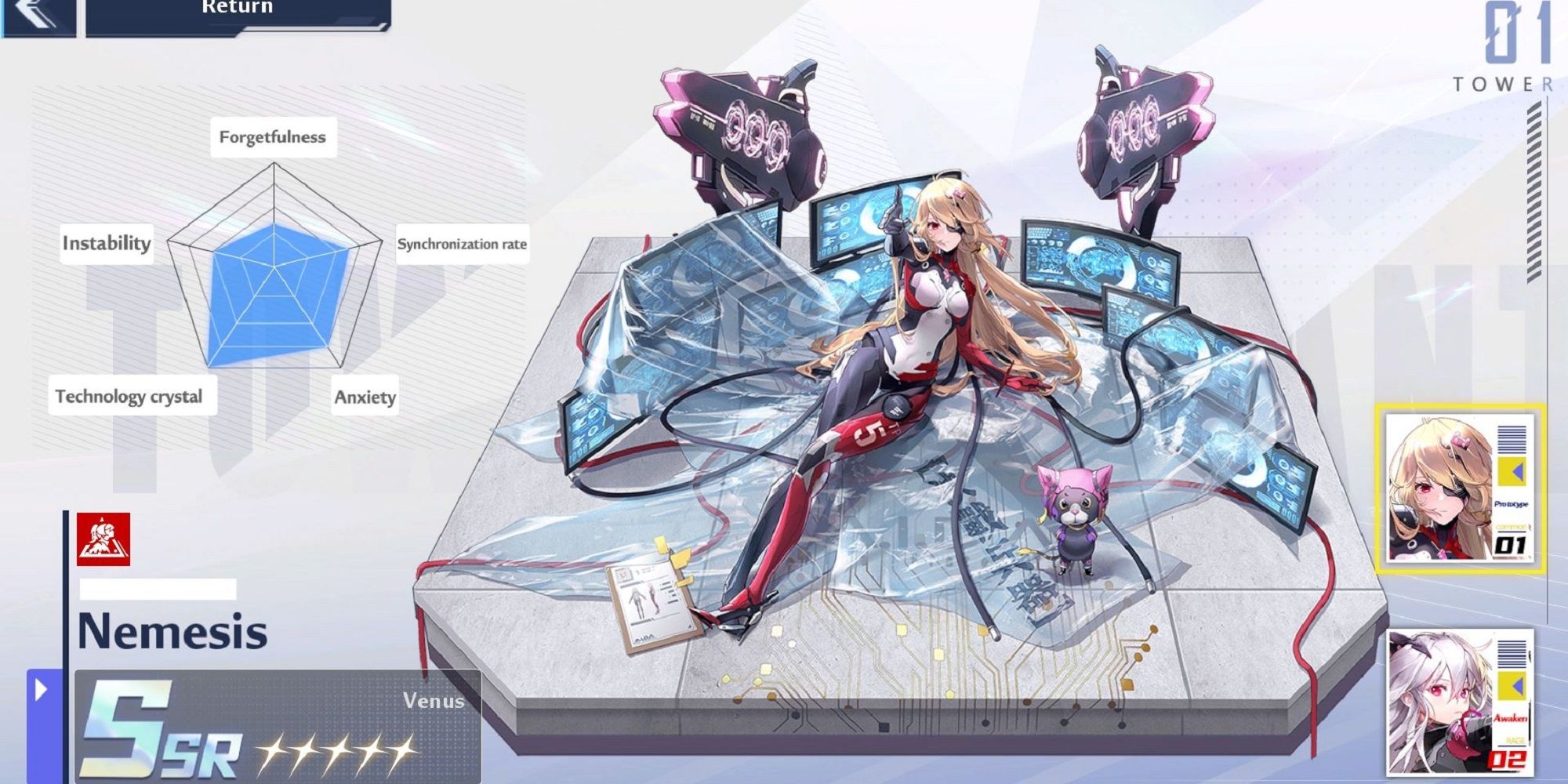 An interesting support character that plays as a damage/healing hybrid, Nemesis does ranged damage with her weapon, Venus, and places electrodes on the ground that deal damage to nearby enemies. After a single advancement, she also gains the ability to regenerate your party’s health with a useful healing chain attached to her Pulse Lock and Particle Beam Burst skills.

However, what’s most notable about Nemesis is her passive Volt Resonance buff which increases volt attack power and volt resistance when combined with a second volt-type weapon. This means that you can build an extremely powerful team by using her alongside another volt-based simulacra such as Crow, Samir, Echo, or Pepper. Nemesis’ awakening traits include Metamorphosis and Sublimation, which increase the damage done by your electrodes and also improve their range. 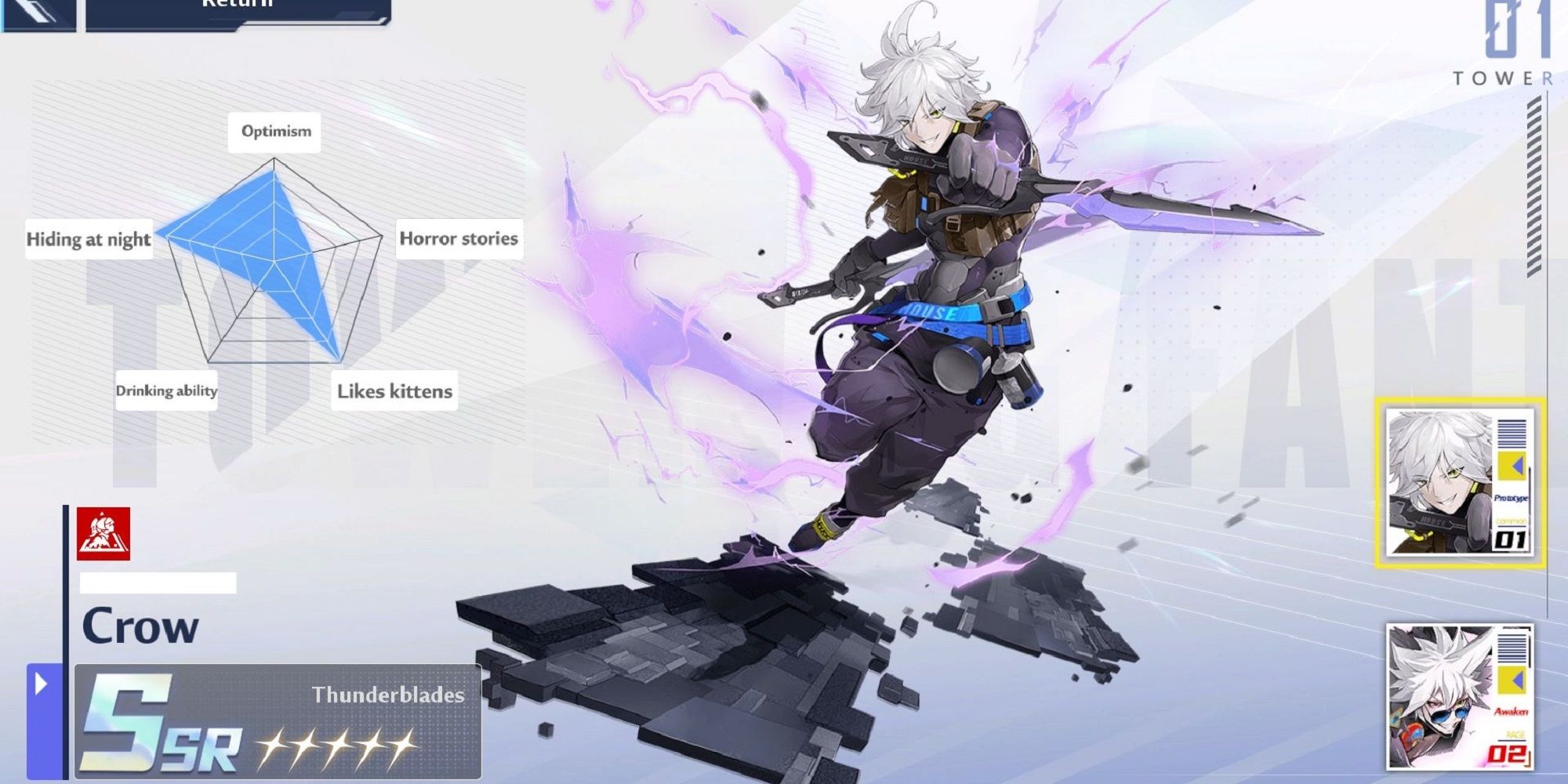 Crow is a fast-moving, backstabbing, dedicated damage dealer who uses a set of twin daggers called Thunderblades. He deals volt damage to enemies in a series of fast-paced melee attacks, breaks shields, boosts crit rate, and leaps into the air to do massive damage with powerful airborne combos.

Unfortunately, he’s pretty weak compared to other damage-focused simulacra, like Samir, until after you’ve unlocked his later advancements — which means that for most, getting the most out of Crow requires heavy investment into the game’s gacha system. Loner and Silent Night, Crow’s two awakening traits, increase damage output and reduce damage taken when not in a group, making him a powerful pick for solo players. 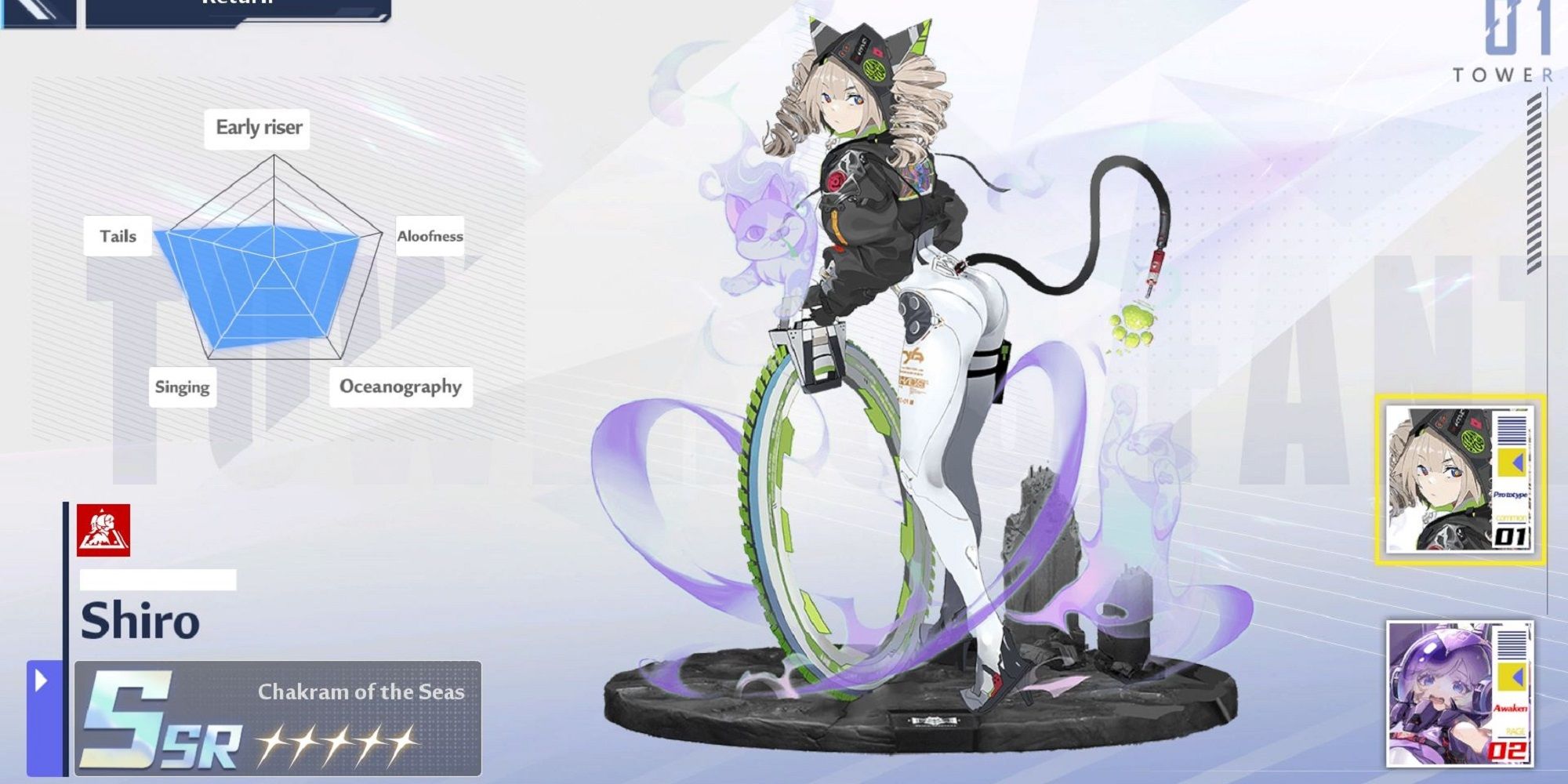 The cat-eared Shiro is as adorable as it gets, but she makes for a pretty hardcore shieldbreaker and damage dealer — especially after unlocking her third advancement that gives her the ability to reset all weapon cooldowns when she shatters an enemy’s shield.

Her two awakening traits, Security Alert and Red Alarm, also increase attack power with an extra buff to physical damage. She fights with Chakram of the Seas, does excellent area-of-effect damage, buffs her party’s attack power, and pulls enemies close together to help with AoE burst or crowd control. 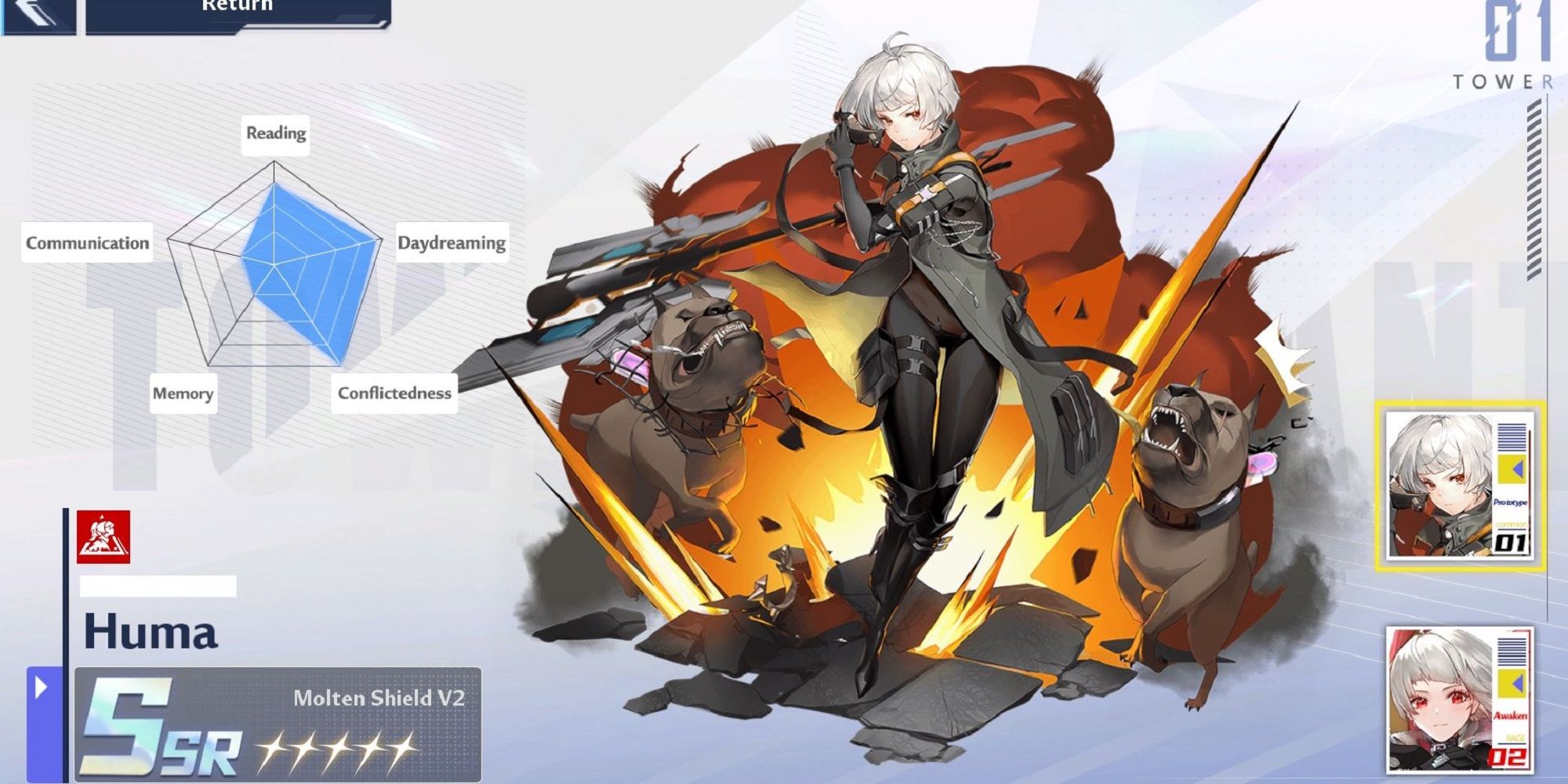 Another excellent shieldbreaker, Huma uses her Molten Shield to do massive fire damage, provide group-wide damage reduction, knock enemies back, and toss them up in the area. Her Fortitude and Iron Screen awakening traits make her extra-tanky, by granting a HP shield that grows based on the amount of damage she takes.

But what makes Huma unique is her ability to switch between a shield form and an axe form, to either stun enemies and block damage (shield) or do extra damage (axe). This makes her a great pick if you like stance dancing, or want to be able to tailor your playstyle to be defense- or offense-focused based on the situation. 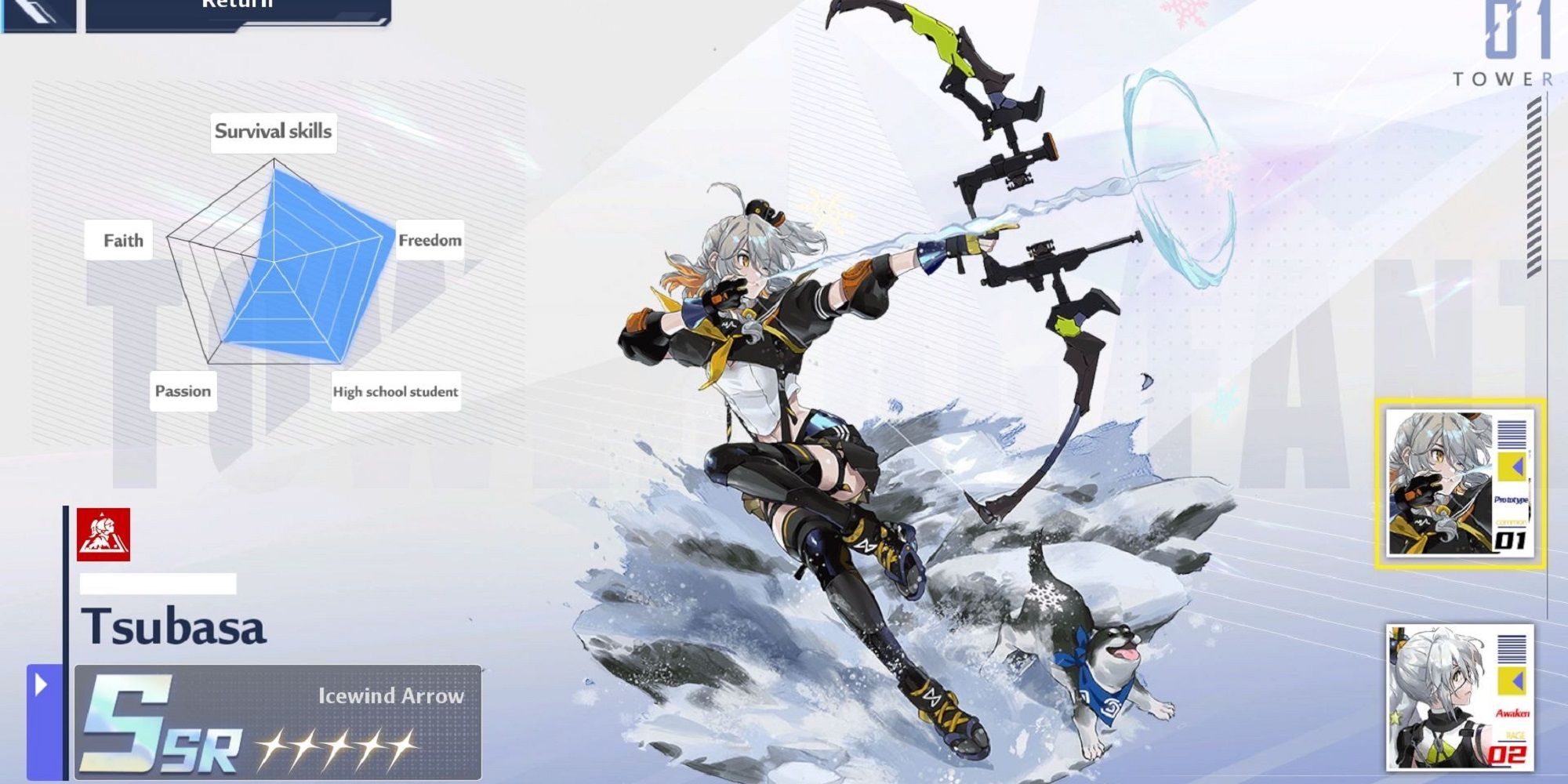 Tsubasa is a ranged damage dealer that fights with a bow called Icewind Arrow. She has a powerful passive ability that freezes enemies, puts a damage debuff on them, and then does additional damage when it breaks. Plus, after unlocking her two awakening traits, Rainstorm and Raging Waves, she gets a stacking buff that increases her attack power each time she does damage.

Considered one of the best early-game SSRs, Tsubasa’s most powerful advancement only requires a single fusion core, and gives her a 15 percent boost to attack power after dashing. Her toolkit includes charging up powerful shots, and a discharge that does a ton of ice damage to enemies, has a chance to give them the freeze debuff, and provides a speed boost. 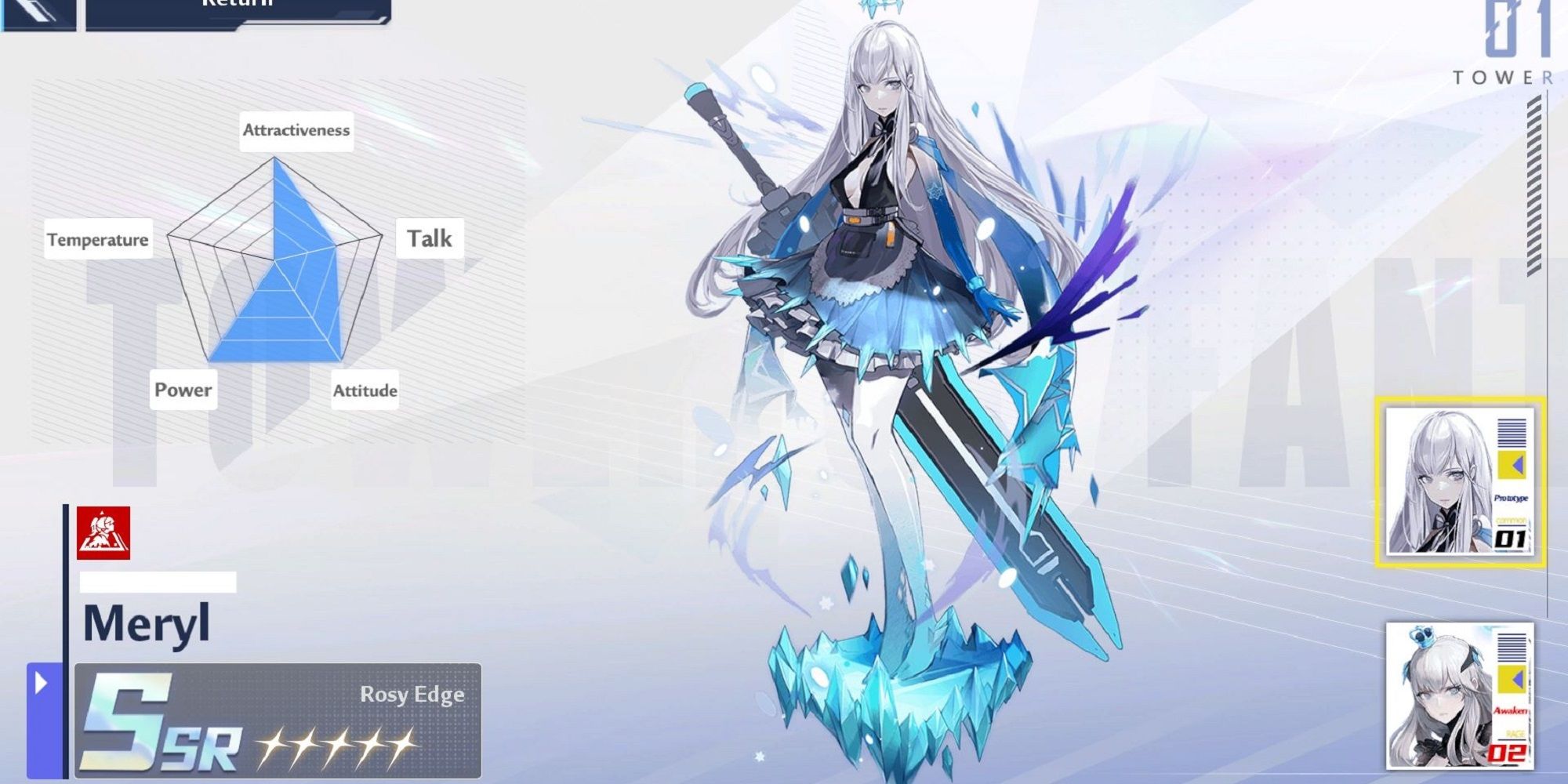 A fantastic shieldbreaker and ice-based damage dealer, Meryl uses an enormous sword called Rosy Edge to freeze targets, knock them back, and fight with a series of slow, heavy strikes. Perhaps the most enjoyable part of playing as Meryl is her Whirlwind ability, a spin-attack that deals massive AoE damage and makes her immune to stuns.

She’s particularly effective against ice enemies after unlocking her awakening traits, Cool Rose and Frosted. These reduce damage from frost attacks, give you immunity to the frostbitten debuff, and cut the amount of time you can be frozen in half. If you want a little extra survivability, you might want to use the game’s gacha system to try and unlock her first advancement, which allows you to heal whenever you break a shield. 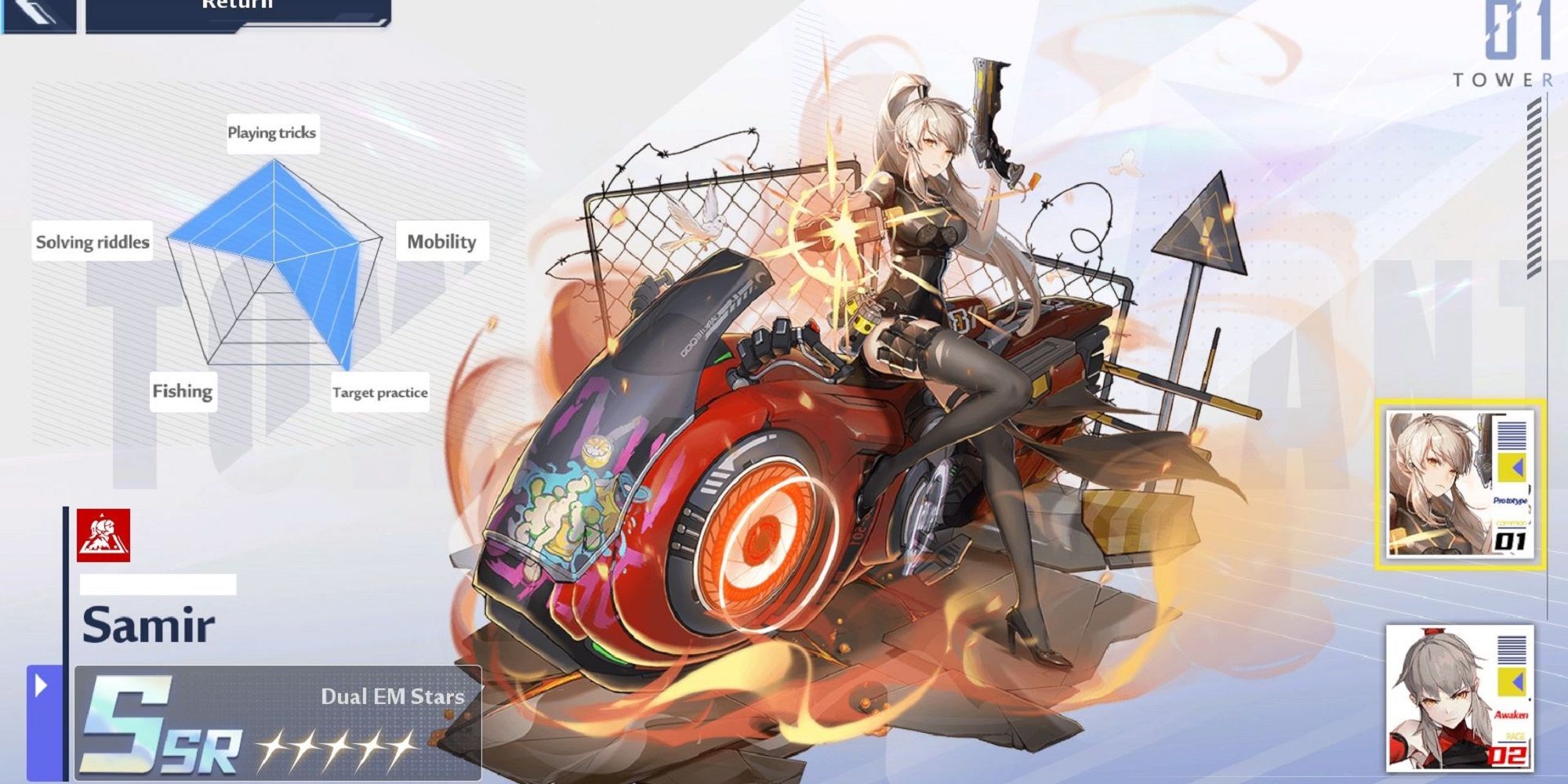 Samir is an incredibly strong, pure damage dealer that fights with a set of volt-based pistols called Dual EM Stars. She’s a great pick if you like a fast-paced, ranged playstyle, since she benefits from a quick charge rate and a ton of mobility. Her Bullet Rain ability is ridiculously fun, and allows you to do a mid-air spin attack while raining electric bullets down on enemies. Not only does this skill do massive damage, it allows you to avoid most enemy attacks in the process.

She also has the ability to paralyze targets, knock them down, remove debuffs, and by using her Electro Field skill, she can even reflect enemy damage. Trickery and Shadows, Samir’s awakening traits, increase her damage when you avoid damage for four seconds, making her an excellent choice if you like to make generous use of your dodge button. 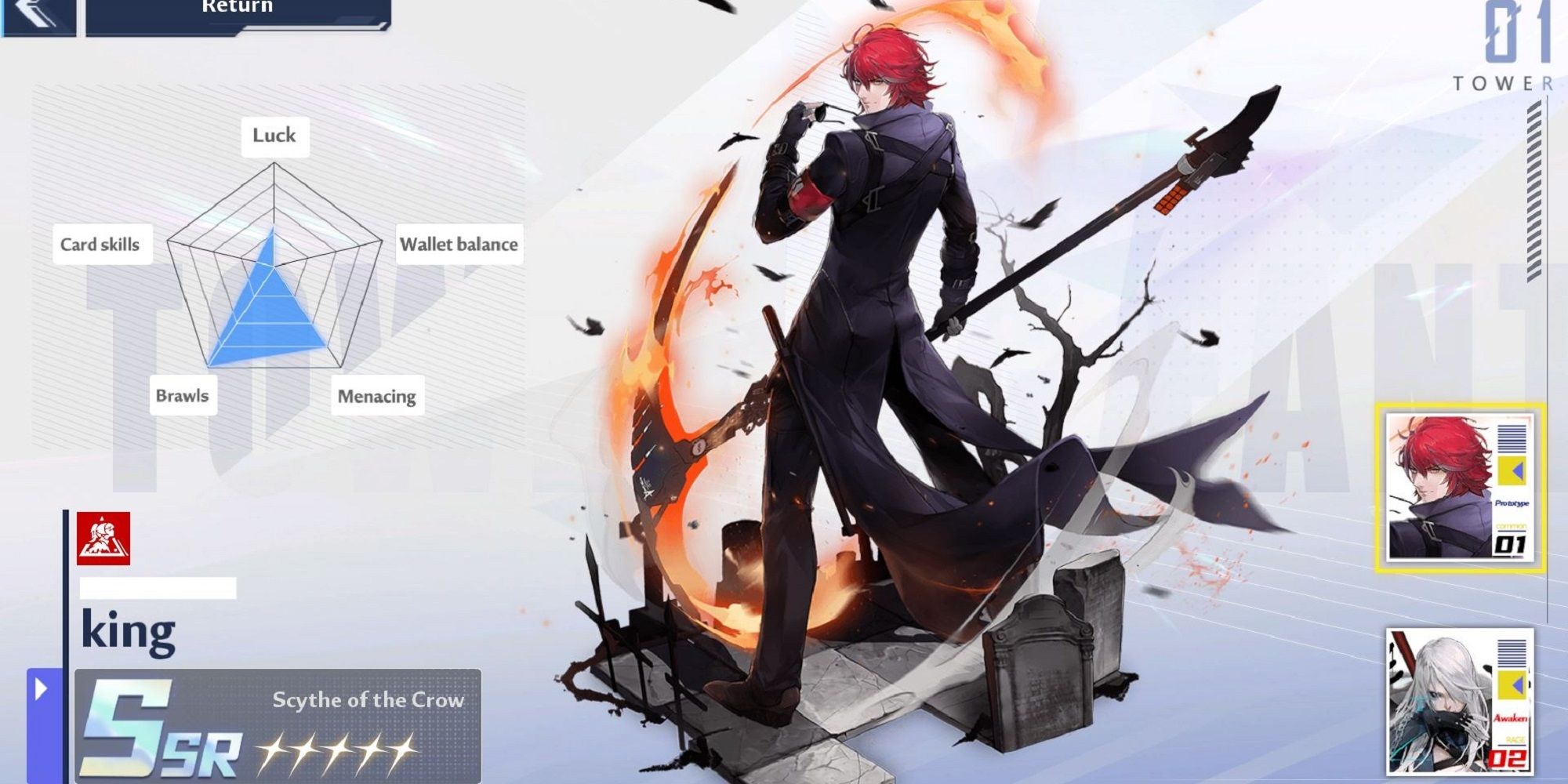 Ultimately the best shieldbreaker and one of the best damage dealers for early game, King fights with the fire-based Scythe of the Crow. He does massive AoE damage with wide, sweeping blows, and after his first advancement, puts a burning damage-over-time debuff on his target whenever you break a shield.

He’s also got some pretty decent survivability, especially after unlocking the Cold-Blooded Swipe and Fear Reaper awakening traits that restore HP after killing enemies. He can also knock enemies back, perform airborne attacks that do bonus fire damage, and pull targets in after dodging. His discharge ability summons erupting volcanoes that do tons of burn damage to up to three targets.