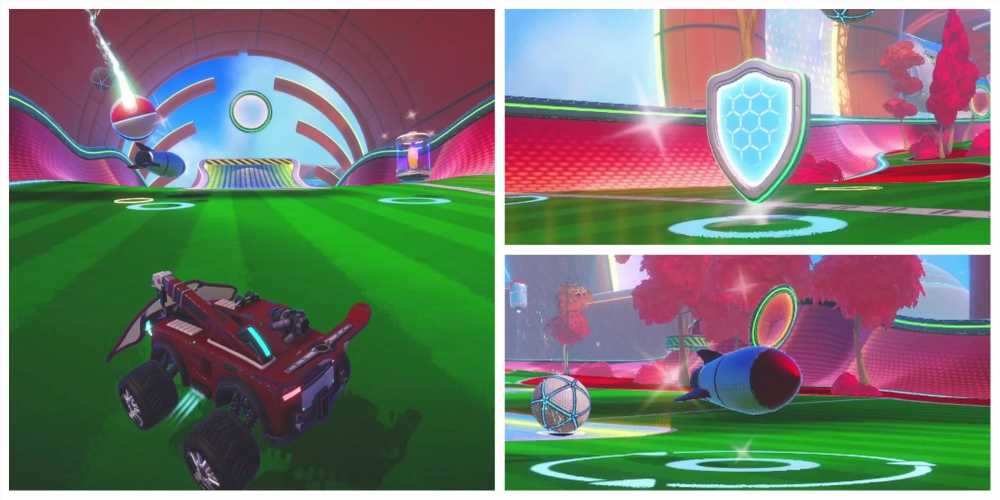 Racing towards the end goal of the course in Turbo Golf Racing and getting there first is no easy task. There are plenty of other racers chasing close behind you and the slightest mistake can often mean the difference between a podium place finish and being disqualified.

Matches are fast, high-octane sessions of absolute anarchy as cars and balls go soaring in all sorts of directions. Thrown into that mix are Power-Ups which can gain you the winning edge or save your tail when you most need it. So with that in mind, here’s a handy guide to Power-Ups in Turbo Golf Racing.

The Importance Of Power-Ups 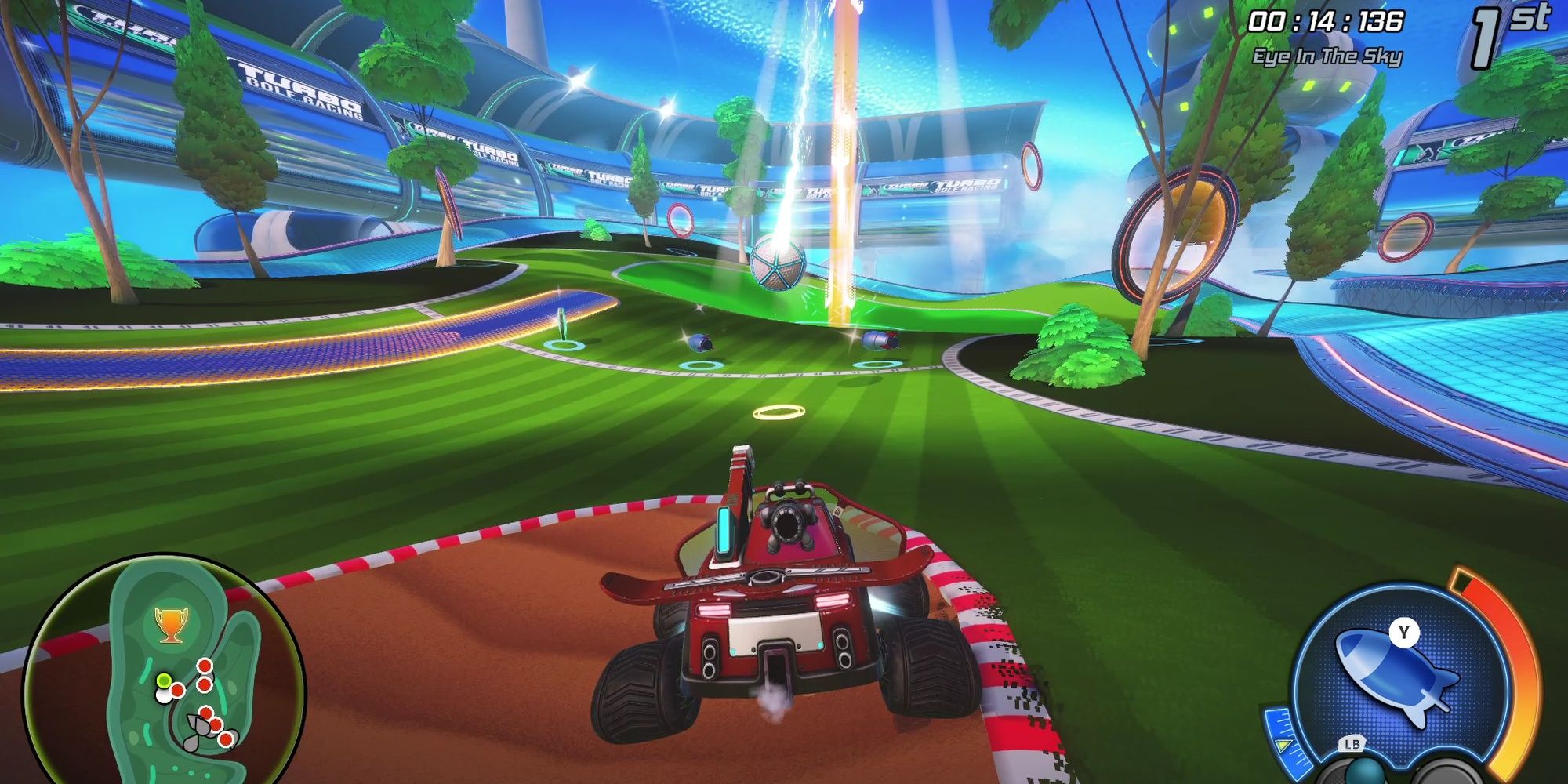 Similar to how a well-timed mushroom in Mario Kart can send you careening down the track ahead of your competitors, so here do Power-Ups provide that winning edge at the last possible moment. They appear as floating objects on the track and all you need to do to pick them up is hit them with your car or the ball.

They reappear after a few seconds and you can hit more than one at a time. There are three Power-Ups so far and they can either knock your rivals out of the competition temporarily, help you catch up to the pack, or protect you from attack from others. Each match is utter anarchy, and having one of these tricks up your sleeve can help. 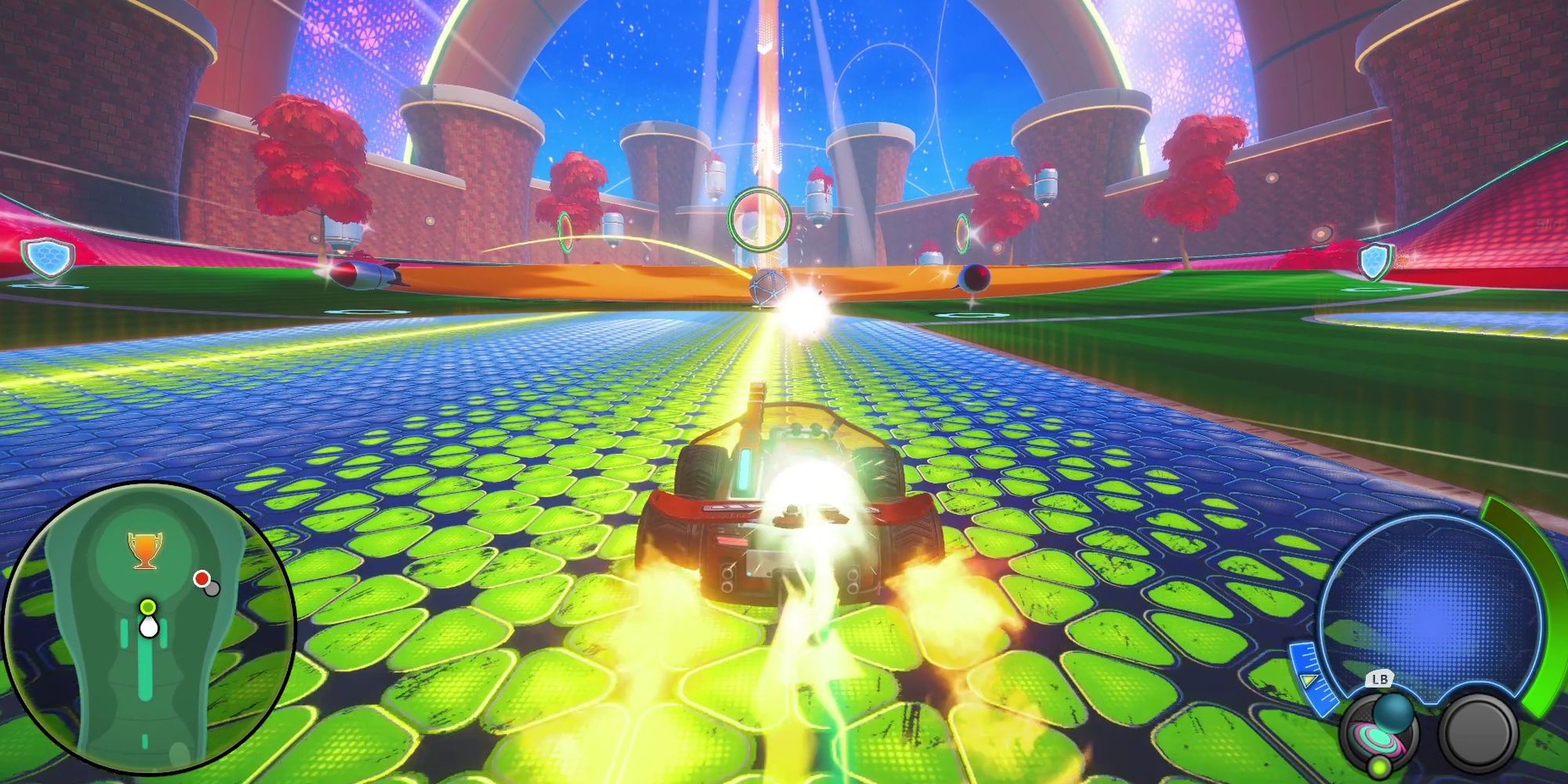 Turbo Golf Racing still has plenty of room left to grow, so for now, the Power-Ups you can pick up as you’re racing around aren’t too plentiful or varied. But what’s there is pretty useful and can often aid in a pinch.

Here’s a little rundown of what these special items are along with what they do. How they’re used though, that’s completely up to you. 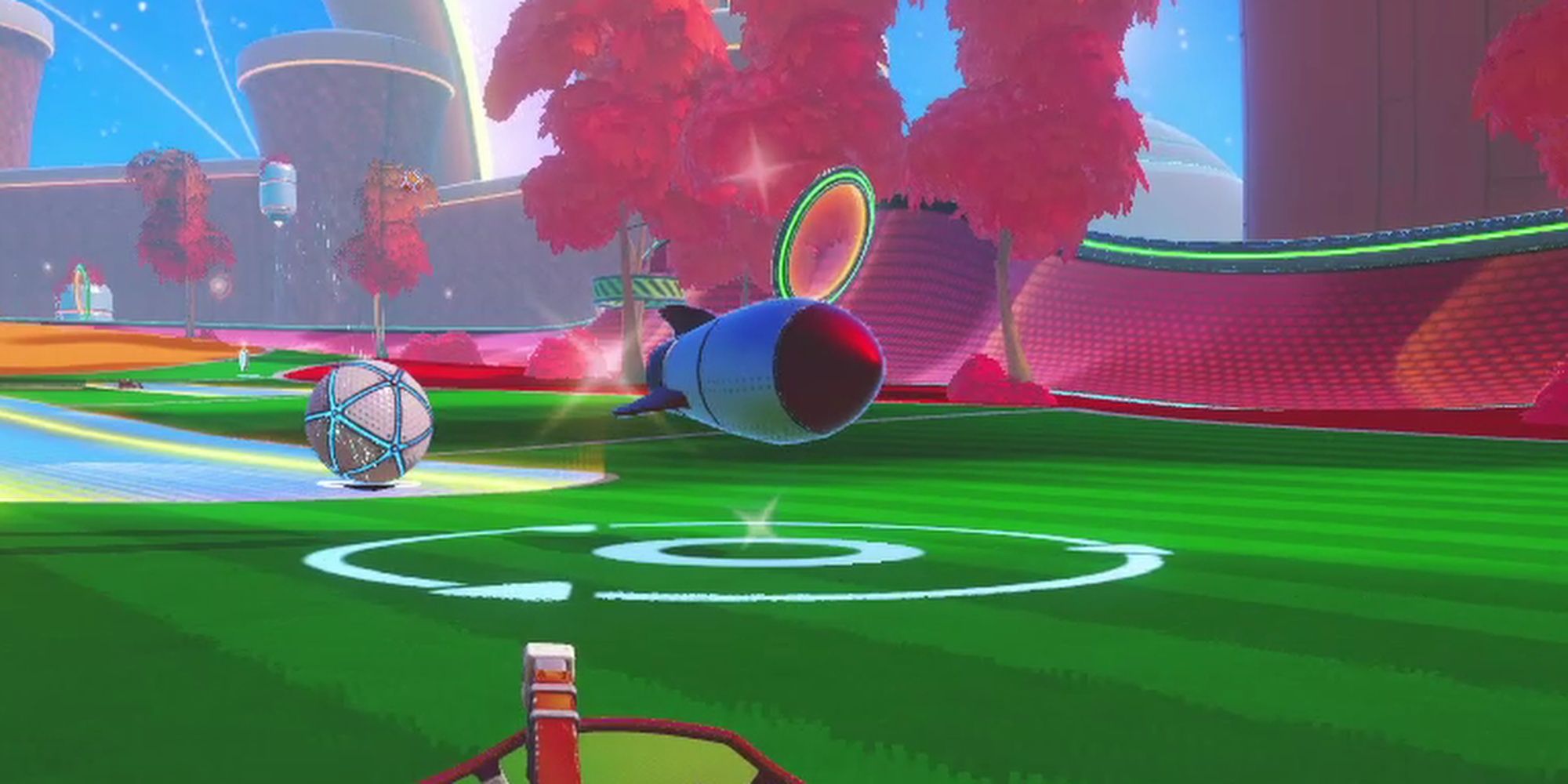 The bane of many a poor Golfer. These car-seeking rockets zip towards you across large swathes of the track with beeping glee before detonating your vehicle. It doesn't kill you, but your only option is to sit and watch it spiraling in the air for a frustrating few seconds.

They’re incredibly useful for slowing down anyone in front of you and their lock-on makes them an easy fire and forget weapon to pop off whilst you’re racing around. However, they’re not a guaranteed hit as they can be duped. They struggle with sudden changes in elevation, obstacles, quick turns, and jumping into suction tubes negates their effects. So you can outmaneuver them if you try. 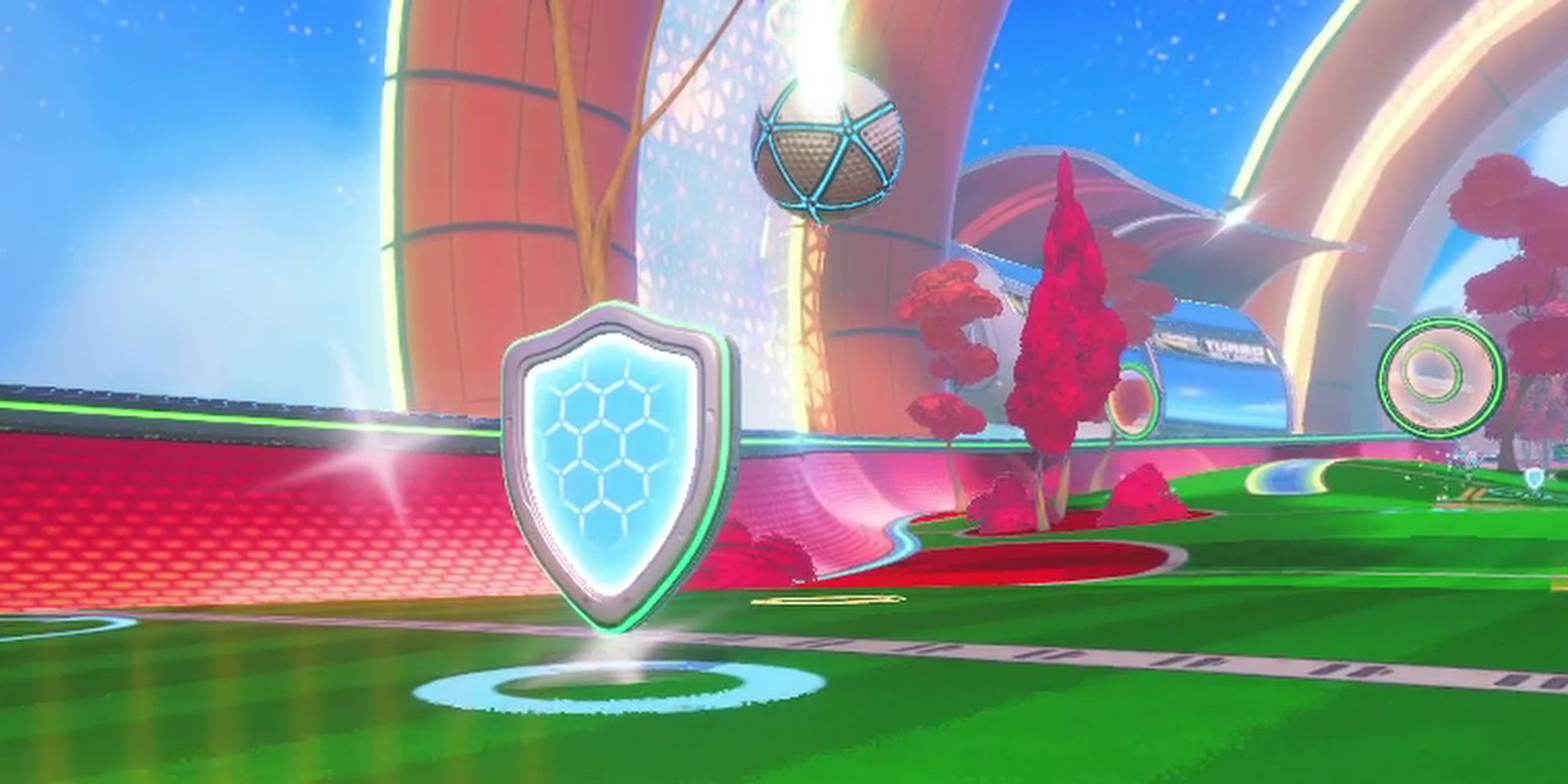 This one is pretty self-explanatory. These floating blue shields do exactly what they say on the tin and will protect you from all damage. Although, they’re not permanent so after one hit you’re out of your ultimate defense.

It blocks missile hits, so it can be an absolute lifesaver if you’re out in front and you hear that tell-tale beeping sound of an inbound rocket. Plus, if you get some air and do a trick by physically spinning your car, you’ll gain a temporary shield for a few seconds. Timed right, you can make yourself impossible to hit for the majority of a match. 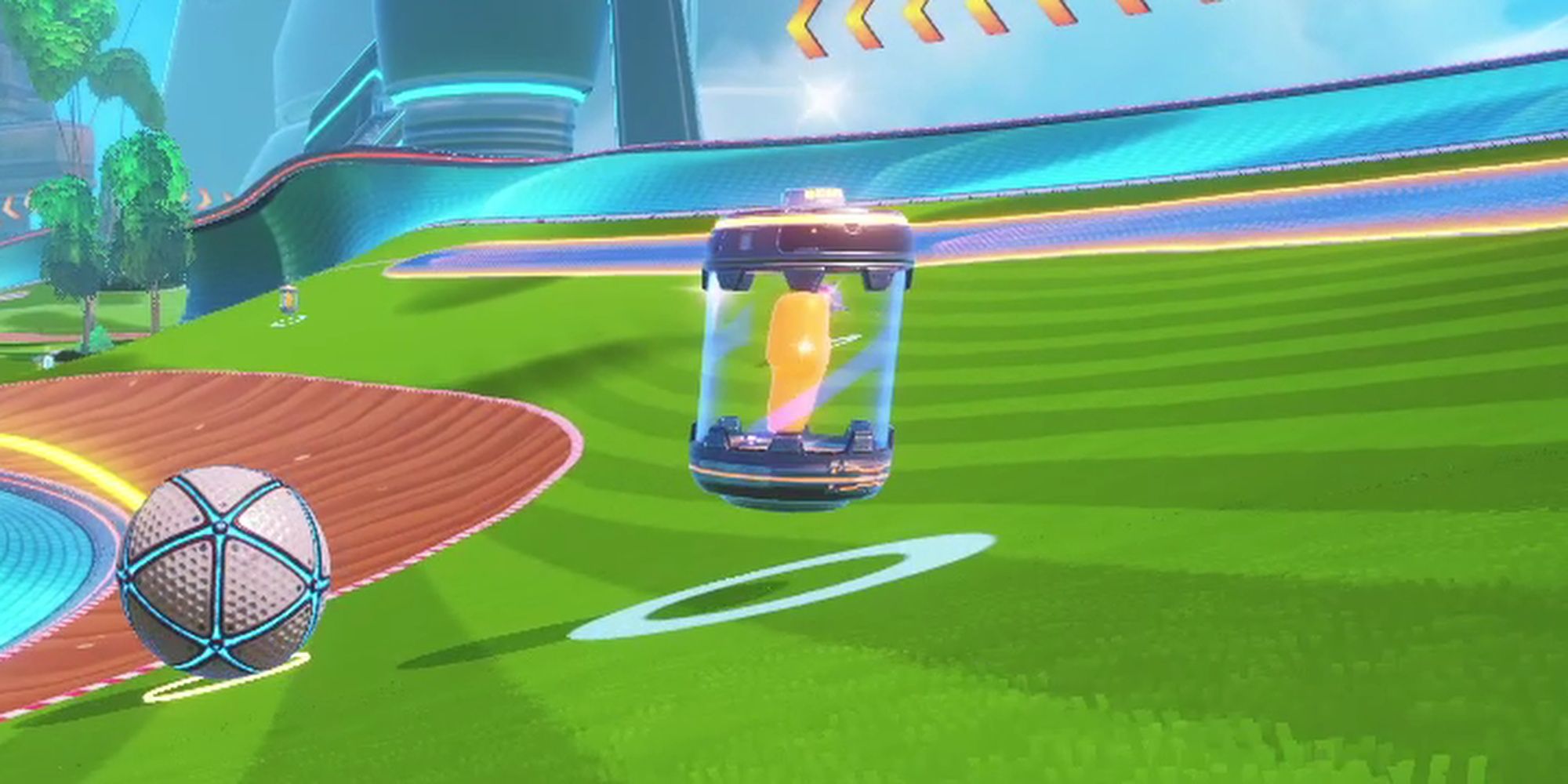 When you start a race you have a finite amount of boost fuel available. With a press of a button this nitrous mix sends you hurtling down the course. Or with a well-timed hop aids in punting the Golf Ball pretty far.

After you run out you’ll have to wait a while as it slowly regens, but grabbing fuel canisters dotted around the track will quickly refill it. It’s a handy little power-up that can be an absolute treasure if you’re using some fuel-hungry Power Cores. So keep an eye out for them if you’re in the need for speed. 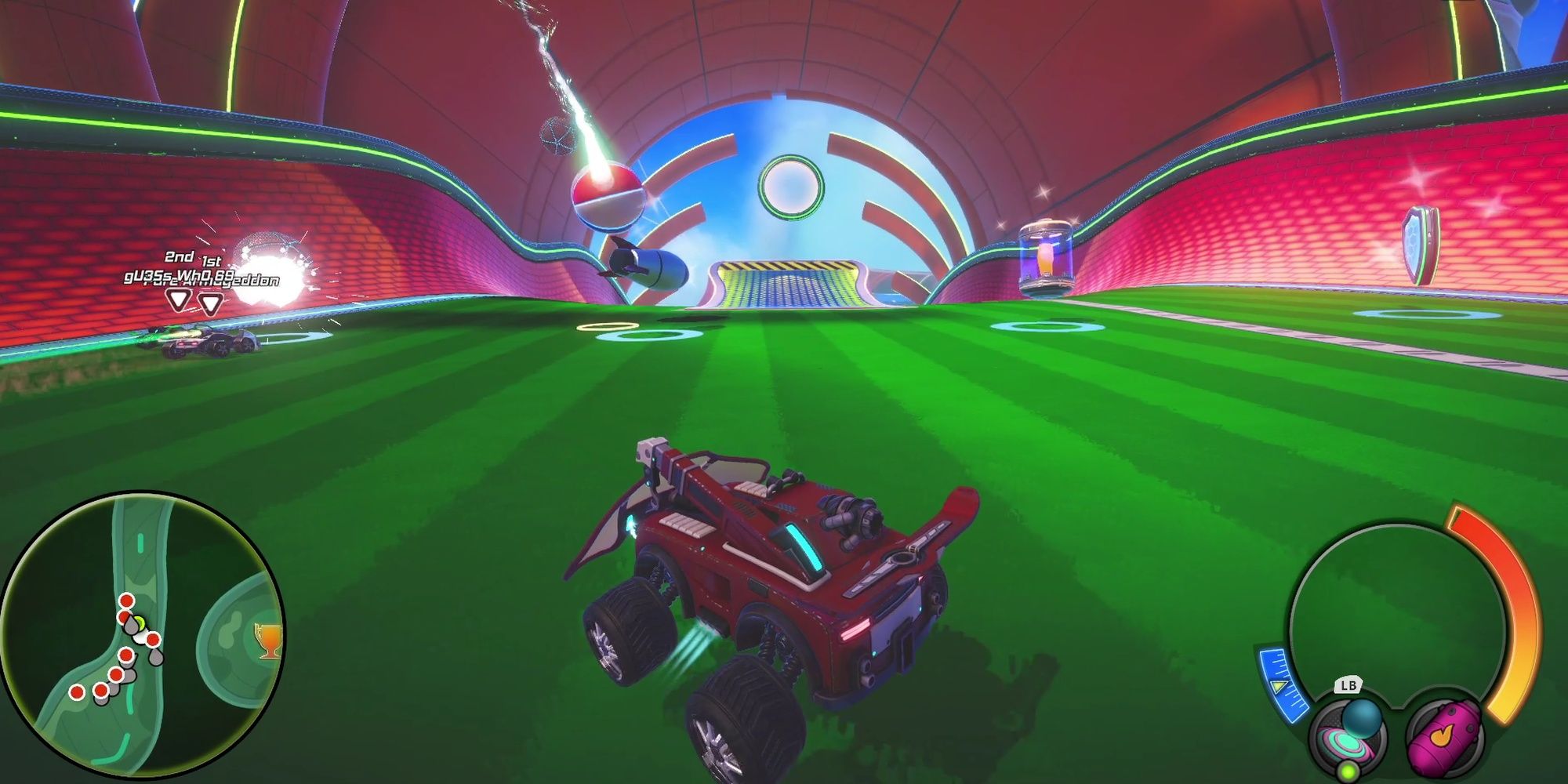 The Power-Ups in Turbo Golf Racing are pretty simple and easy to get down once you’ve used them a handful of times. But still, there are a few tricks that are worth knowing in order to make the most of these high-tech items that the Community has discovered and are worth passing on.

So with that in mind, here are a few tips for using the Power-Ups that you’ll want to have pinned to your car's dashboard when you start loudly revving your engine at the start of the next match.

If In Doubt, Grab Boost Fuel 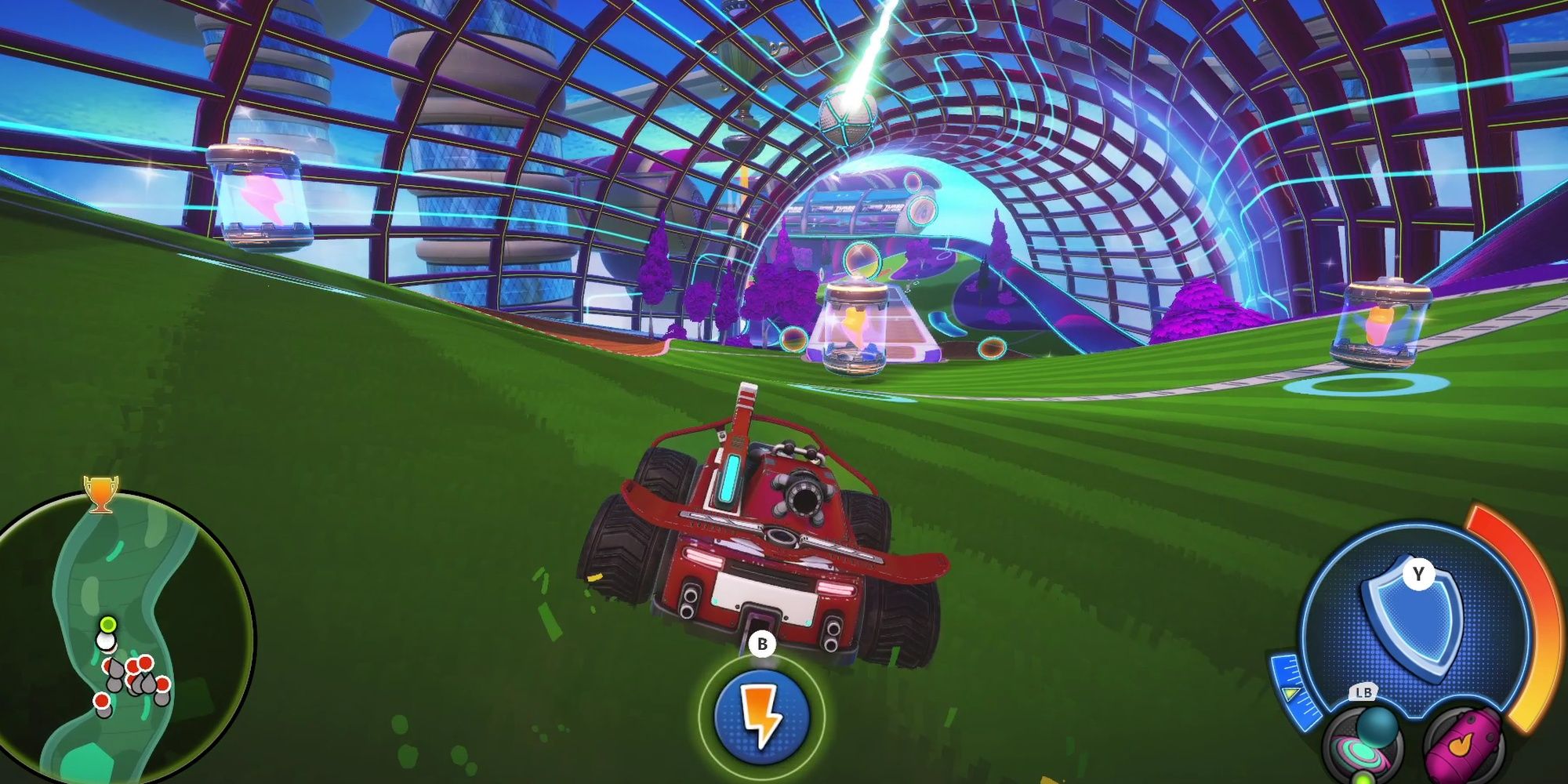 You don’t really have to stress too much about the Power-Ups. There's not a lot of meta around what one is the best one to use at that moment when you're driving at top speed as they’re all pretty handy. Plus the rounds in Turbo Golf Racing are pretty fast, so often they’re over before you know it.

But as you’re zipping around the greens at top speed and you see these floating items up ahead, a reliable one to grab is the boost fuel. Keeping your booster ability topped up means you can power-shot the ball or quickly rocket towards it if you’ve managed to slice it in the wrong direction and need to quickly correct it. So grab the boost fuel if you’re unsure.

Close The Distance Before Firing Missiles 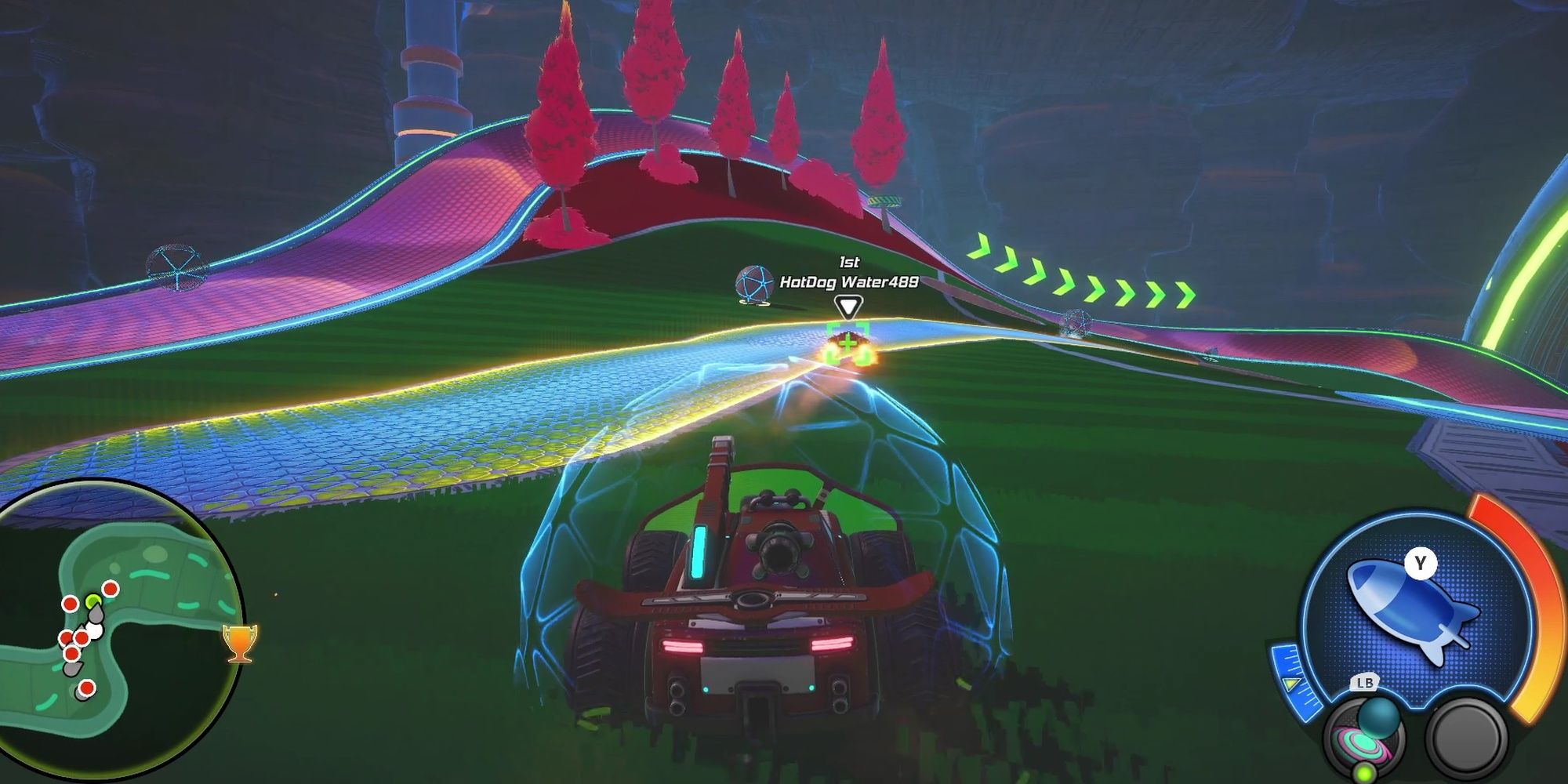 Missiles are incredibly helpful. They can be the absolute bane of anyone in the lead and they’re a little tricky to get rid of if you don’t have any place to hide. But if you’re about to fire one at an unsuspecting player, you might want to hold off until you’re very close.

This is because the pathing on these projects falls apart the further a target is away from them and it can often be a wasted shot. For example, if you fire and your target goes near trees, around a corner, off an incline, or into a suction tube, your missile will either miss. Or it could collide with the environment or have their damage negated. So get within a few feet at least to make sure your target has no place to hide. 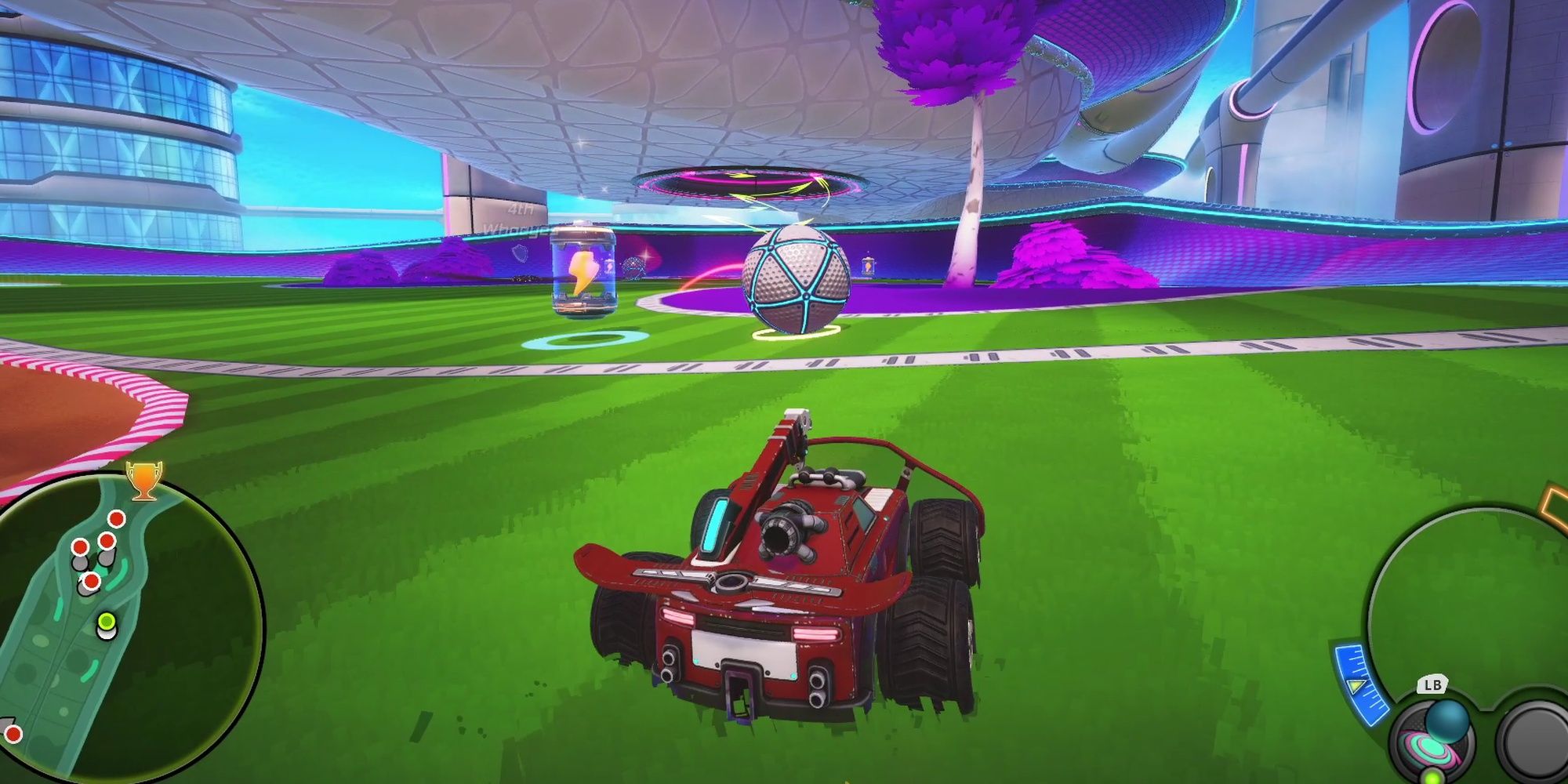 Don’t worry if you miss a chance to grab a Power-Up as you’re racing towards the hole at the end of a course. There are plenty of chances to try and grab these handy items again later on.

Turbo Golf Racing likes to dump them fairly regularly, especially on some of the longer levels. So you’ll rarely finish a match without being able to pick up at least one or two of them at some point. They mainly appear in the middle of the track, but occasionally there will be one or two at the furthest edges of the track. Like in the rough or inside bunkers to help out anyone that might be having a hard time keeping their ball under control. 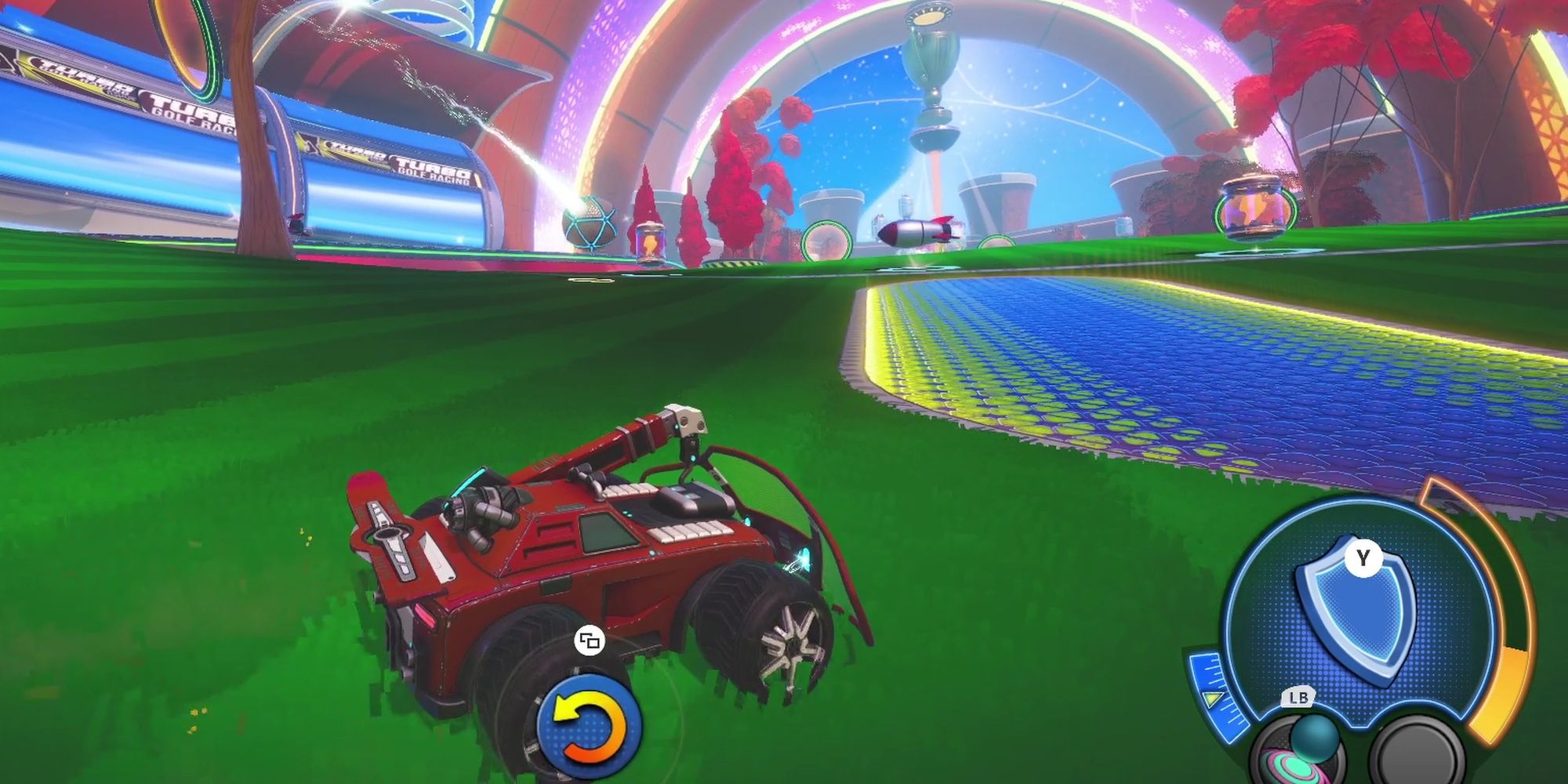 A nice feature of Turbo Golf Racing is that you don’t need to only drive over a Power-Up to claim it. If you hit your ball through one of these floating, rotating weapons you’ll also be able to pick it up.

It can be quite handy for grabbing stuff early and stealing it from other racers at the last second with a well-timed shot. Another tactic worth trying if you can manage it is to angle the ball through multiple of them at once whilst driving through another. If it’s done right you can essentially empty the track of weaponry for other players.