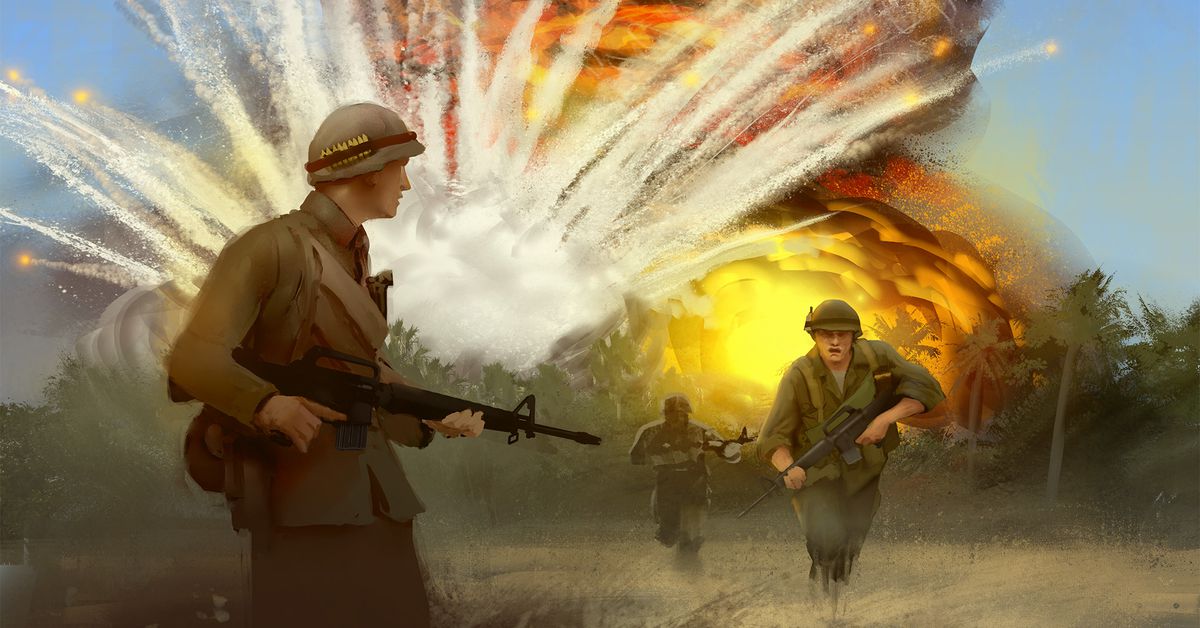 Phalanx Games, publisher of Martin Wallace’s Rocketmen and the elaborate U-Boot: The Board Game, is turning its attention to the Vietnam War. Its next title is called Purple Haze, and it goes live on the Gamefound crowdfunding platform starting Jan. 25.

Purple Haze promises to deliver single-player and cooperative exploration alongside small-arms combat in a format that most closely resembles a light role-playing game. Polygon got a brief demo in December, and while it’s not quite as intricate as the publisher’s other offerings, it certainly sounds like an interesting premise.

While not a purely historical game, Purple Haze will mirror real-world events in Vietnam from September 1967 until the spring of 1968, according to Phalanx. That period includes the Tet Offensive, a massive coordinated assault by the North Vietnamese on urban areas and a particularly dark period for the U.S. Marine Corps. Players take on the role of a fireteam of rookie grunts fresh off the boat from the States. Eight linked missions are included in the base game, and Phalanx tells Polygon that an expansion will also be available for pre-order during the crowdfunding campaign.

Driving the action is a mission booklet that will help players to navigate a branching storyline. Purple Haze will rely on a straightforward keyword system to note player progress. Complete a given objective, jot down a certain keyword as your reward, and utilize that word later on to bypass, enhance, or otherwise adjust the challenges your fireteam goes up against.

There will be over 20 different fictional U.S. Marines included in the base game, each with a series of RPG-style stats — survivability, charisma, perception, intelligence, and willpower. Marines can be upgraded between missions using experience points, and they can also gain specializations over time, including roles like scout and sniper. Character death is possible, and while physical damage can be healed to a certain point, mental damage will be persistent, reflecting the grueling impact of jungle warfare.

Components include replicas of the actual topographical maps used by the U.S. military, on which players must navigate one grid square at a time. Combat is dice-driven, with players rolling for the enemy and then rolling dice to beat them. Each battle is represented by a large card depicting the view of the battlefield from the Marine unit commander’s perspective. Multiple targets will present themselves, and it’s up to players to direct their fire toward particular targets on first contact.

The game tracks time of day, level of fatigue, and the amount of attention the unit is bringing to itself based on the pace of their movement and the locations they’re passing through. Build up enough threat and combat encounters will pop off in short order.

Soldiers start their tours as “cherry” grunts, and can be upgraded to take on roles such as sniper or scout.
Image: Phalanx Games

All that may sound fairly complex, but it’s actually a much simpler game than others in Phalanx’s library. U-Boot, for instance, included a 3D submarine with cut-away sides and a mobile app to simulate using the periscope.

Phalanx’s campaign is one of the first high-profile crowdfunding projects this year to be launched on Gamefound, a platform built around the needs of tabletop developers and publishers. Many board game designers and publishers have expressed renewed interest in Gamefound following Kickstarter’s announcement that it will embrace blockchain technology going forward.