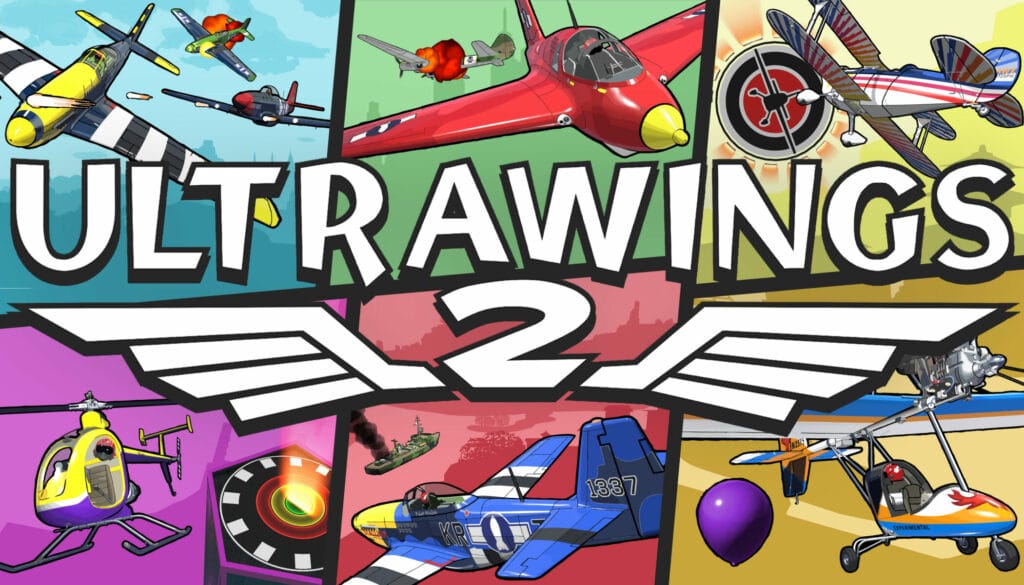 Chris Stockman has a secret. Or at least, he should have one.

When I sit down to talk with the Studio Director of Bit Planet Games about the upcoming Ultrawings 2, I sheepishly confess that the flight genre, at large, is not my cup of tea. I tell him I’m a nervous flyer. Not in the real world but certainly in VR. Not because I’m worried I’d have a near-real, near-death experience but because I’m forever concerned that I just won’t ‘get’ what I’m meant to be doing.

It happened with Flight Simulator, a game I have endless respect for but have settled for never fully understanding with its torrent of dashboards and tutorials, and even the drastically simpler Star Wars: Squadrons’ class-based multiplayer seemed beyond my grasp. Stockman stares at me over webcam with a knowing grin and says: “I thought that way. I hate flight games and, honesty, I hate Flight Simulator.”

Surely, this is heresy of the highest order. But Stockman’s words aren’t intended as an attack on the wider genre — which he recognizes has its many dedicated fans — but instead as a guiding light for the design philosophy for Ultrawings 2. “We kind of made a flight sim for me,” he says.

Within minutes of jumping into the sequel, I find myself getting the hang of it. Ultrawings 2 doubles down on a blend of authentic process and accessible control. It’s got a virtual joystick-based control scheme that actually works, making smart use of Touch controller haptics and audio cues to give you a sense of just how aggressively you’re steering. But it also doesn’t deprive you of the inexplicably moreish details of flight simulation, like flicking a bunch of switches before take-off or angling a plane just right for a slow and steady touchdown.

Stockman describes it as controlling an aircraft as how it “should” feel as opposed to how it actually feels. Early staple challenges like flying through rings against the clock aren’t deviously difficult displays of aviation so much as enjoyable obstacle courses that lul you into how and when to pitch and at what speeds, before later missions start to incrementally ask more of you.

“For us, we want the learning curve to be there because this isn’t Ace Combat,” Stockman notes. “But with that said, we don’t think you need an FAA license to pilot anything.”

Within my first hour of play I was racking up Gold Medals with ease without feeling like the game itself was going easy on me. Crucially, I was confident that I could hand the headset over to pretty much anyone else and they’d experience a similar learning curve. These details will be familiar to anyone that’s played the first game, but this is also an extension of all of that. It’s aiming for all the right cliches in VR’s early life: more content, new features and refined gameplay.

“The first Ultrawings was very relaxing and, at the time, I thought it was kind of groundbreaking with how we did our motion controls and being able to interact with all this stuff,” Stockman says. “But that’s where the time was spent, in the creation of the islands. Less time was spent on having a lot of variety of gameplay. And so that’s something that we focused on really early was how can we just make it better across the board?”

Better across the board means a new map with no loading times between differently-themed islands (albeit with a lengthy journey between them), new challenges with a medal-based rating system to satisfy casual players whilst still pushing the hardcore pilots, and a series first – aerial combat. The first Ultrawings had target practice missions in which you held a gun in one hand, but Ultrawings 2 will have full-on dogfights that adhere to that same mix of half-sim, half-arcade design.

You might’ve seen me behind the wheel (or yaw), facing down enemies in new gameplay from last week’s Upload VR Showcase. It’s about 30 seconds of highlights edited down for a 10-ish minute battle in which I was frantically looping round and trading shots back and forth. At times there’s a dreadful sense something’s on my tail. At others, there’s a smirk across my face as the crosshairs line up and I pull the trigger. There’s a touch of frustration as I come to understand the game’s laws and how to get myself out of harm’s way but, as with the rest of the experience, I soon figure it out.

“We wanted to be semi-realistic, but not completely,” Stockman says of combat. “I don’t know if you noticed the enemy’s die a lot faster than you do. And that I think was important because I just don’t think it’d be very fun [otherwise].”

He later adds: “Most realistic aircraft games, if you take off your fly to a location for 20 minutes, you do a little bit of combat. And ours, it’s all very much within the world and within the island that you’re on so that you get into it really, really quickly.”

Moreover, every element of the game, from the combat-oriented missions to the time-based challenges, will have a sense of progression to them. Stockman says that battles will evolve from dogfights to combat with ground-based vehicles and beyond, whilst races with slowly get you to hone your skills and try out new tricks. Missions will be bite-sized chunks that get you in and out of action quickly (you can also fly around in a free-flight mode), with mode raised from completing objectives then spent on new planes and airports.

You’ll also get to spend more time at other islands; the starting location is a humble little town but just over the pond awaits winding canyons and bustling cities. Playing on Quest 2, I’m struck by how I can view all of these islands from far off whilst also spotting cars moving around the streets directly below. The game has a remarkable draw distance on that front, though rest assured that the PC VR version will also use improved assets for a visually superior experience.

Another key feature of the experience is persistence. “In one mission, you may encounter enemy fighters. And if you don’t destroy them, they’ll actually come back in on a future mission,” the developer says. “To gold metal everything you kind of have to play it in a sense of like, you really should have destroyed those fighters before in a previous mission before they came back.”

The result, Stockman says, is something that might be almost too big. He says that unlocking most of the essential features — all aircraft and airports — will take around five to eight hours depending on skill level. Completing all the missions? Perhaps around 20 to 40 hours. But what if you want to Gold Medal everything? “I like to say takes about 60 hours to go Gold Medal everything,” Stockman answers. “I think that might be an understatement. It might be closer to 80.”

Granted that’s a goal only the most dedicated will aim for, but it’s certainly a welcome thing to hear. And it calls back to why I think Ultrawings 2 might be the flight ‘sim’ that VR needs in 2022. Because this is one of the few things headsets can do really well right now, and we all want something that realizes that potential. Microsoft Flight Simulator is an undeniably fantastic experience deserving over every accolade thrown at it. But it’s also obtuse from just about every possible angle and it needs a lot of work to understand and a lot of expensive machinery to even get running smoothly.

Ultrawings 2 has its learning curves, yes, but it’s much faster to deliver gratification, meaning you spend more of those 5 – 80 hours feeling like an ace pilot and not studying tutorials. Some people might be sniffy about that and, yes, that’s fine too; you already have your flight sim of choice. This, however, feels like it’s going to allow a much wider range of people to soar.

Ultrawings 2 releases on Quest in February of 2022, with the PC VR version to follow soon after.