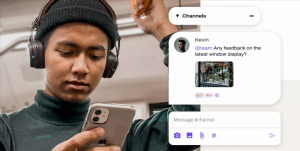 Cloud communications platform Dialpad has raised $170 million in a round of funding led by Iconiq Capital, valuing the company at $2.2 billion — roughly double its valuation on last year.

Dialpad has been one of the many beneficiaries of the rapid transition to a remote “work-from-anywhere” world. Its suite of cloud-based communication tools, spanning web conferencing, business phone systems, messaging, and in-bound contact centers has helped it thrive as companies have been forced to embrace a more decentralized workforce.

Dialpad has gone all-in on the notion that business communication tools should be unified in a single place. Part of this unification process has entailed rebranding its previously standalone UberConference service as Dialpad Meetings, and integrating it directly into its core platform.

“We are streamlining the way people communicate and collaborate — no matter where they are,” Dialpad founder and CEO Craig Walker told VentureBeat. “It’s no longer acceptable for a company to expect its customers or employees to utilize and navigate multiple platforms or channels. Dialpad helps customers simplify business collaboration, and avoid the growing phenomenon of ‘app overload’ for both internal and external communications.”

Walker has a notable history in the digital communications space. He initially founded an internet telephony company called Dialpad Communications back at the turn of the century, which he sold to Yahoo to serve as the building blocks of Yahoo Voice.

Walker left Yahoo to form GrandCentral Communications, an online service that enabled users to merge their existing phone numbers and voice mailboxes into a single account — he sold that company to Google and spearheaded the launch of Google Voice. After leaving Google, Walker launched conference call service UberConference, which would later morph back into Dialpad, after Walker bought the brand and domain back from Yahoo.

Dialpad has been ramping up its AI endeavors these past few years, kicking off back in 2018 when it acquired a conference call transcription service called TalkIQ. This deal served as the backbone of a new Dialpad technology dubbed Voice Intelligence, which can generate notes from every phone call, conduct sentiment analysis, and use natural language processing (NLP) to highlight actionable items from meetings.

In the past few months, Dialpad has boosted its AI credentials further by acquiring two AI-powered players in the customer experience (CX) technology realm — Koopid and Kare Knowledgeware.

Prior to now, Dialpad had raised around $230 million, and in the 14 months since its previous raise, the company has added a fairly impressive roster of customers to a list that already included Uber, Splunk, and Stripe — it now counts GrubHub, Rapid7, and New Relic as fully signed-up Dialpad clients too. With another $170 million in the bank, the company plans to double down on its AI, with a focus on hiring new personnel across natural language processing (NLP), machine learning, data engineering, and more.