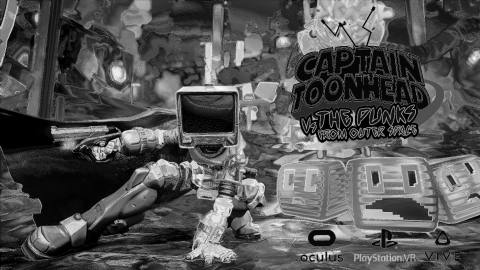 We jump into the weird world of Captain Toonhead vs the Punks From Outer Space. Is this tower defense hybrid one to watch?

There was a point a few years ago that there were so many VR wave shooter/tower defense games releasing I legitimately ran out things to say about them. It was a twisted kind of nightmare; an endless sea of enemies marching ever forth when I closed my eyes, index fingers impossibly muscular from repeatedly spamming controller triggers and a strange urge to upgrade everyday household items whenever I picked them up.

But time has, mercifully, moved on. Throw a rock into the VR library these days and you’re more likely to hit a Beat Saber clone or zombie shooter. Captain Toonhead vs the Punks From Outer Space arrives after a welcome rest from the genre, then, and it promises enough polish and depth to at least raise an eyebrow.

Check out a new, exclusive trailer for the game below.

Developer Teravision Games goes for slapstick humor in this take on the formula. You play as a janitor on an intergalactic military operation that gets hastily promoted to Captain in the wake of a burrito-related incident. A love of Saturday morning cartoons pushes you to embrace the mantle of Captain Toonhead, a TV-wearing, dual-wielding warrior that crafts attack towers with fun twists to save a race of blocky aliens from formations of enemy punks, chickens, flying cats and dinosaurs. By now you probably know where the game’s headspace is at.

It’s obvious from the get go that a lot of love has been poured into Captain Toonhead’s presentation and story. Some of this really works, like the astonishing attention to detail in environments and weapons: one of your pistols has a nodding dog on top that waggles uncontrollably in combat, and you’ll notice cosmetic additions as you upgrade them too. I love that towers have outlandish backstories, like a flame-spitting behemoth that’s powered by hot sauce.

Other elements, meanwhile, are a straight up miss. Though the script has its moments, I’ve so far found Captain Toonhead’s repeated one-liners to be pretty annoying, and the game’s focus on story tends to pad out the gaps between levels. You can skip the cutscenes, though it’s a shame when so much thought has been paid to giving the game a sense of progression with its narrative.

Strip the comedy away, though, and Captain Toonhead is actually quite fun to play, with some caveats. I’ve played the first five levels, which steadily introduce a welcome amount of new concepts over time. Tower types are quickly mixed up with area of effect and slow-down attacks, and there’s some strategy to figuring out where to place them and where to stand yourself.

When waves start, the action comes thick and fast. Enemies drop coins that you’ll need to grab with a pair of throwable hammers, which are also used to build new towers and upgrade them when ready. You can only teleport between deployed towers but there’s also an isometric view of the map available from each and, eventually, you’ll be able to take control of towers yourself for temporary increased firepower. Between missions there are upgrades to gain across all areas, which helped encourage me to push on and unlock more options.

There’s a fair amount to Captain Toonhead, then, and it can overwhelm at times. It’s frustrating when an enemy slips past a stack of towers and you can’t teleport to an empty weapon post to finish them off — especially with no time-slowing option to help you navigate early on and the dual-wielding pistol shooting is as simple as it gets for VR, right down to laser pointers that let you zone out whilst aiming.

It’s also yet to really push me in these opening levels, and I haven’t struggled with ending a level with every block-person-thing intact.

With all that said, I’ve definitely been enjoying my time with the game, from considering strategy and tower placements at the start of the level to the frantic switch up in tactics when a t-rex makes it past the last of my defences. I’d need Captain Toonhead to really start doubling down on difficulty if it was going to amount to anything more than a decent shooter with some welcome (if hit and miss) personality. But, even if that doesn’t happen, I’m pretty sure the ride will be enjoyable all the same.

Captain Toonhead vs the Punks From Outer Space is due to launch later this year on Oculus Quest, PSVR and PC VR headsets.