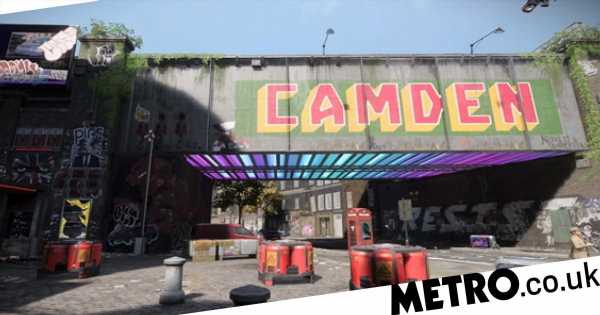 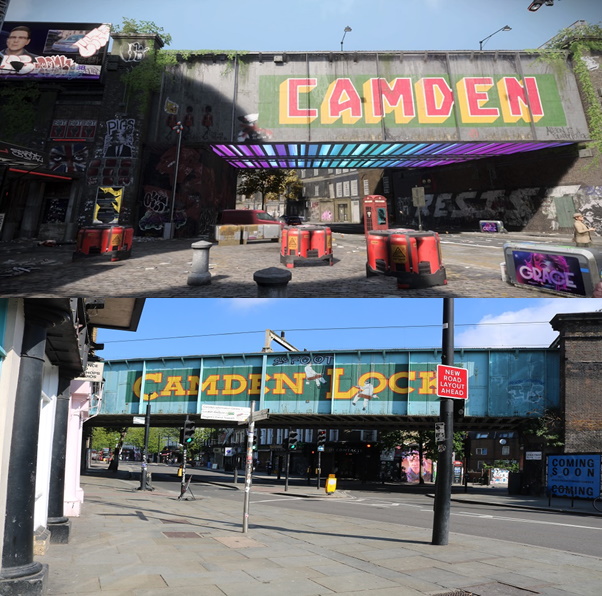 A reader compares the real Camden Town with Ubisoft’s version and finds Watch Dogs: Legion to already be strangely outdated.

Back in 2018, I took my camera out to explore the City of London, to see how faithfully and accurately it had been recreated in Assassin’s Creed Syndicate. This year, with an unexpected period of serenity in the capital, caused by the global pandemic, I decided to return to the world of video game exploration, this time using the open world of Watch Dogs: Legion to have a little fun in the virtual and real worlds.

I wrote about the sense of immersion before, when the world and freedom of movement was a little more restricted, and appreciated the general ambiance in the digital recreation. But with restrictions easing in recent months, it felt like an opportune time to get back out and about, using this title to have a little fun. I enjoy using these open world games beyond their original intentions, these sorts of endeavours aren’t necessarily designed to highlight the fallacies and failings of their particular game engines but more to highlight the skill and merit in bringing this city of mine to life.

On this occasion I decided to visit the gentrified bohemian centre of London in Camden and immediately became aware of how the events of the last year have transformed the area beyond the near future setting of the game to leave it feeling a little antiquated, a relic of the past through no fault of its own.

The game managed to create the illusion of the near future dystopian setting using a number of shorthand methods, such as the abundance of neon lighting and automated vehicles that at times did feel a little similar to the aesthetic of Blade Runner. This was tempered somewhat with the historical landmarks and more distinct areas of the city, with the general ambiance of Camden maintained for the most part.

Visiting the area this past weekend did reveal some changes to the area over the last year, notably the old market on the high street being consigned to history, with the new Buck Street Market now open and reflecting the push towards sustainability and the feeling of gentrification. The old market was immediately recognisable, having spent a morning or two exploring the narrow alleys it was always an experience but now a footnote in history preserved in the alternate future setting of Watch Dogs.

Equally, the changes imposed by the restrictions of the pandemic have seen a number of traders near the food market pushed back, to be replaced by the new dining pods that allow safe spaces in these uncertain times.

Given its location on the edge of the virtual sandbox, there were some imposed changes that are recognisable when you’ve visited the area before. The Regents Canal leading towards London Zoo ends shortly after the market. The high street curves around and back towards the city; this maintains the illusion of the open world but there are clear objective blocks in place that stop you venturing beyond this particular location. But when you don’t push against the walls it does a good job of recreating the Borough of Camden.

One of the highlights is always the peace of the waterways that intersect the high street and the game managed to capture the golden light and peace of nature perfectly between the energy of the markets. Whilst a majority of the interior and the stables market is blocked off or absent, there are still areas you can explore. The open air food market is open to walk around and this was fun to see how the two compared, the small touches such as the canal moorings recreated in digital form.

Even the iron bridge across the canal was present and available to walk across. It’s not perfect, there are some changes to the levels of buildings, presumably to create consistency with the sections that have been removed, but it does manage to capture the spirit of the area and this was evident just walking around and seeing how closely the two aligned.

The last year has afforded the area an opportunity to clean itself up, perhaps losing a little of the character and ambience but certainly feeling like a nicer place to visit. As such, the game’s recreation of the area is instantly recognisable to anyone that has visited the borough and enjoyed the atmosphere of Camden. It’s a faithful interpretation of the location but due to the events of the last year does now feel dated.

You can imagine as software develops along the technological curve it may afford producers an opportunity to update and make changes to their open worlds. For games such as Legion, that had a more mixed reception, it’s harder to envisage substantial changes.

The lasting memory I had of the borough, before visiting it in person, remains in the digital approximation. Because the world has moved on, the borough has changed to reflect the concerns and needs of the populace. The transformative nature of the pandemic has left a game released less than a year ago feeling strangely antiquated. Take from that what you will.