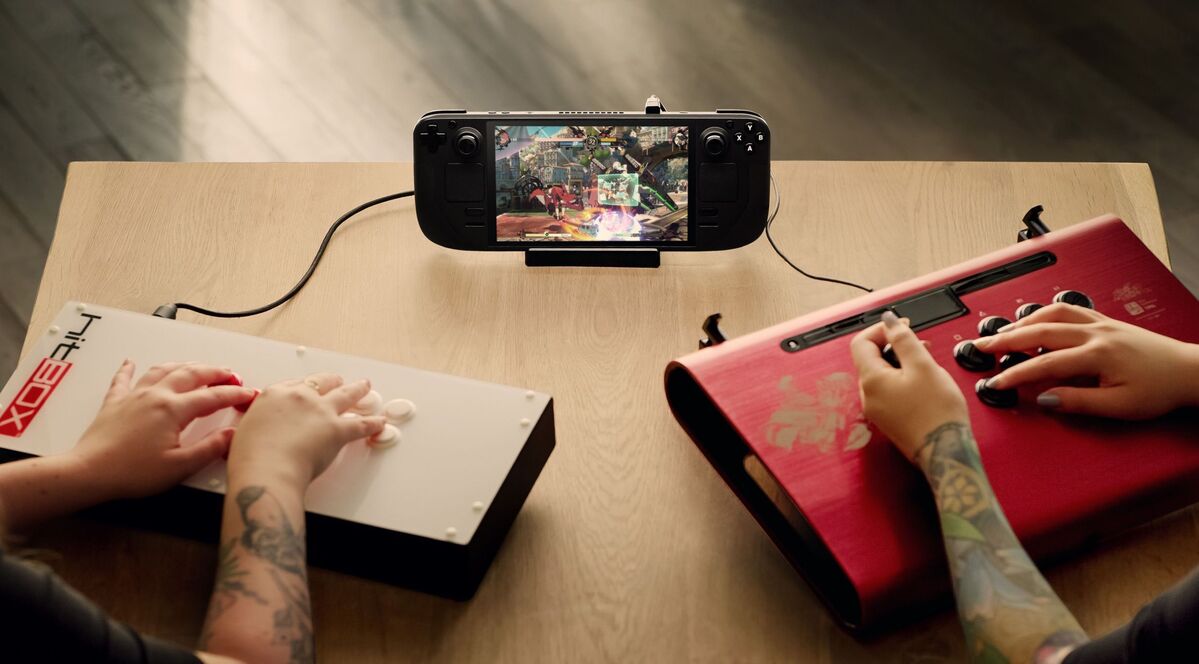 Valve’s “Steam Deck” handheld PC has caused quite a stir among PC gaming geeks, but the biggest shakeup might not be its Nintendo Switch-like form factor. The software running inside of it is the real surprise. Why does the Steam Deck run Linux? Blame Windows.

The Steam Deck and the software inside of it are the culmination of a nearly decade-long “hedging strategy” embarked upon by Valve chief Gabe Newell and company many moons ago, when Microsoft tried exerting more control over developers with Windows 8.

But it’s also the next phase of Valve’s escape plan.

Windows 10 smoothed over Windows 8’s worst sins, so you may not remember how different—or “a catastrophe,” to use Newell’s words—that operating system was when it launched in 2012.

Windows 8 bent over backwards to make mobile UI a priority, relegating the desktop to “just another app” status in a screen full of colorful tiles. More ominously, the Windows Store launched alongside the operating system, with strict requirements about the sorts of software allowed and a steep gatekeeper fee similar to what Apple and Google charge for inclusion in their app stores. Developers feared Microsoft would become increasingly draconian in its rules. Their concerns were escalated by the simultaneous launch of Windows RT, an Arm-based version of Windows that restricted users to using only software sanctioned by the Windows Store. (RT quickly fizzled.)

Devoted PC game developers felt especially anxious. Newell called it “a giant sadness.” Blizzard executive VP Rob Pardo tweeted that Windows 8 is “not awesome for Blizzard either” in the wake of Newell’s ‘catastrophe’ comment. Minecraft creator Markus “Notch” Persson told Microsoft to “stop trying to ruin the PC as an open platform” when it asked him to certify the game for Windows 8.

While Notch ironically sold Minecraft to Microsoft for $2.5 billion just a couple of years later, Newell and Valve reacted to the “catastrophe” the way most sane folks would: Disaster prep, so they wouldn’t be caught flat-footed if Microsoft decided to clench its fist around the open PC ecosystem.

Well, not really. The beta version of the Steam-centric operating system required arcane technical knowledge to install, and Valve itself warned that “unless you’re an intrepid Linux hacker already, we’re going to recommend that you wait until later in 2014 to try it out.” The operating system certainly had plenty of rough edges out of the gate—it worked only with Nvidia GPUs, for example—but Valve worked diligently on polishing them. By October 2015, Valve’s Steam Machines launched.

The Steam Machine endeavor was doomed from the start, and I laid out the case for why they would even before they launched. There were several reasons: delays, poor communication from Valve, an unorthodox new Steam Controller needed to use the PCs, the simultaneous launch of the more-versatile Steam Link, and a “good, better, best” branding strategy for Steam Machine makers that sowed further confusion. But in retrospect the biggest problem was SteamOS itself.

SteamOS could only run Linux games, you see. And gaming on Linux was dismal in 2015. I used to maintain a list of the best Linux games because so few developers bothered to create Linux ports. Coaxing games into running often required exotic workarounds and third-party tools, and even then, games that ran at all often ran jankily. Again: It’s no surprise Steam Machines failed.

Valve learned its lesson. You don’t stop planning for a catastrophe just because you run into some road bumps. After Steam Machines died, something much more momentous—and the key to the Steam Deck’s existence—rose from their ashes.

If developers wouldn’t make games for Linux, Valve decided it would invest in making Windows games run on Linux instead. In 2018, Valve introduced Proton, a fork of the popular WINE compatibility layer that lets Linux PCs play Windows games. (If you aren’t familiar with WINE, count yourself lucky.)

“There was always kind of this classic chicken and egg problem with the Steam Machine,” Valve designer Scott Dalton told IGN. “That led us down this path of Proton, where now there’s all these games that actually run.”

Proton was truly a game-changer. If Linux gaming was a near-barren desert before, Proton was the water it so desperately needed. Thousands upon thousands of Windows games could just be played on Linux PCs now—some tinkering required at times, natch. Over the last few years, Valve (with help from the WINE experts at CodeWeavers) has worked hard to fix the most glaring issues. In 2018, our curated list of the best Linux games topped out at 35 titles. Right now, the community-run ProtonDB website is tracking almost 19,000 Proton-compatible games, and over 15,000 of them run just fine on Linux.

The technology still isn’t quite perfect, as our look at how Proton will make or break the Steam Deck details in more depth. The most popular multiplayer shooters don’t work on Linux because BattlEye and Easy Anti-Cheat aren’t compatible with Proton. Valve says it’s working with those studios to get support for the technology ahead of the Steam Deck’s launch. If the past is any indication, Valve will get it right eventually.

The Steam Deck is a Trojan Horse

Valve isn’t just pushing a handheld gaming PC. Gabe Newell and company are still preparing for potential catastrophe. While you could look at the Steam Deck as the culmination of nearly a decade of work for Valve, you can also look at it in the other direction. If the Steam Deck is successful, it will force developers to devote more attention to Linux—or at least to consider Proton compatibility while coding. With each game that runs just fine on the Steam Deck, Valve’s escape hatch opens a few inches wider.

“We’re trying to make sure that Linux thrives,” Newell told Venture Beat just ahead of Windows 8’s launch in 2012. “…We’re going to continue working with the Linux distribution guys, shipping Steam, shipping our games, and making it as easy as possible for anybody who’s engaged with us—putting their games on Steam and getting those running on Linux, as well.”