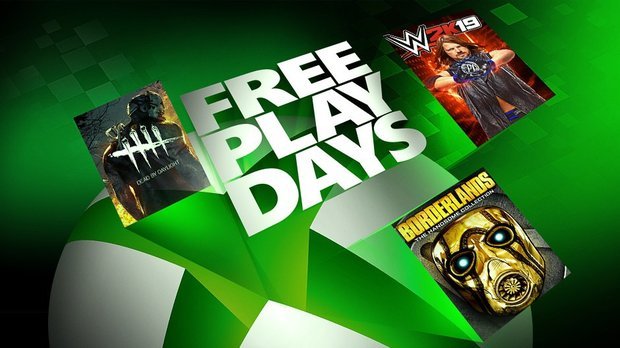 If you want to learn a little more about each title on offer, here’s what Microsoft has to say about the game:

WrestleMania weekend is nearly underway, and you too can step inside the ring with WWE 2K19! With incredible game modes such as the return of 2K Showcase, chronicling the rise of Daniel Bryan, his retirement and eventual return to the ring! Play as some of your favourite WWE Superstars from the past and present with our biggest roster yet, or take your created Superstar on a journey through the independent scene all the way to the top of the WWE in MyCareer!

To catch up on everything you’ve missed, or just relive it all over again, play the essential Borderlands compilation for free today, now in Ultra High Definition! The Handsome Collection includes the definitive versions of both Borderlands 2 and Borderlands: The Pre-Sequel. Shoot and loot your way through the entire Handsome Jack saga and explore both the planet of Pandora and its moon, Elpis.

Ever wished to play as one of the characters from your favourite horror movies? To feel the adrenaline rush of the survivors or the thrill of being the killer? Dead by Daylight is a 1 vs 4 multiplayer game that allows you to choose between playing an unstoppable Killer and one of four survivors trying to evade a gruesome death. With the Special Edition, you get seven killers and eight survivors to choose from. This deadly game of cat and mouse also lets you to meet some of the most iconic faces from horror franchises, such as the latest addition: Ash Williams from the Ash vs Evil Dead series.

Which other games are available for free on Xbox One with Games with Gold?

Here’s a reminder of the free games available in April 2019.

Keep reading for a full overview of each game, just below the most recent Games with Gold Trailer.

Take on the role of an ascending mage warrior in the action RPG title, The Technomancer. Feared and respected by all, you’ll develop four different combat skill trees based on three different fighting styles. Craft your weapons, take part in dynamic conversations and explore lost cities as your actions dramatically alter the story and world.

Play the complete remake of the cult-classic that started the open world, action-adventure genre in Outcast: Second Contact. On Adelpha, an alien world as beautiful as it is dangerous, explore magic and science and make the right choices to save the destiny of two universes.

Take part in a battle far, far away in the classic Star Wars Battlefront II. Either play the campaign of a veteran clone trooper reminiscing of his time in the 501st Legion or enjoy multiple gameplay modes. Fight on foot in the front lines, use the force powers of a Jedi, or dogfight in space in your favorite starships, all in 16 exotic locations.

Defend the nation from cross-border insurgents in Tom Clancy’s Ghost Recon: Advanced Warfighter 2. In this tactical shooter, command your unit and complete your missions in dynamic weather conditions and a real-time day and night cycle. You’ll have 72 hours to defeat the enemy across mountainous terrain, small towns and urban environments.