Both Microsoft and Sony are making a big deal about the storage technology in their upcoming next-gen consoles. And they should. They’re both using cutting-edge NVMe SSDs that are an order of magnitude faster than what we had in the Xbox One or PlayStation 4. But this hardware comes with at least one major drawback: It’s expensive. That’s why the Xbox Series X comes with only a 1TB drive while the PlayStation 5 has a 825GB SSD. And if you want more on Xbox, that’s going to cost you $220 for the Seagate Storage Expansion Card.

What’s going on with that Seagate drive? Is it completely custom, or does it use some existing tech? And how can a hard drive possibly justify $220 for 1TB of storage?

Well, let’s get into all of that starting with this: The Seagate Expansion Card isn’t a hard drive. The new consoles do not use hard drives at all. That is an obsolete technology for gaming, and we’ve moved onto SSDs. I’m not gonna give anyone a hard time for conflating the terms, but it’s a bit like calling a Blu-ray disc a “floppy.”

Even an SSD doesn’t cost 22 cents per gigabyte these days, but again, Microsoft isn’t using a basic SSD. Thanks to AMD’s support for the fast PCIe 4 interface, the Xbox Series X uses a drive that is much faster than even the SSD you might have in your PC or Mac.

But we don’t have to take Microsoft’s word for it. Let’s take a look for ourselves.

Microsoft sent me a Seagate Expansion Card with the preview version of the Xbox Series X hardware. And the tiny add-on is reminiscent of memory cards that you might have used on your PlayStation or Nintendo 64. But it does have a few notable and telling differences.

The card has a plastic sheath that wraps around a metal chassis. And while the metal starts off looking attractive, it has a tendency to look somewhat greasy or lubricated. But Microsoft and Seagate didn’t use the metal for show. That exists for spreading and routing heat out of the storage device.

The superfast NAND storage in modern SSDs can run hot, and so can a PCIe 4.0 controller chip. Microsoft’s engineers designed this to shift heat out of those components and into the Xbox for dissipation.

Let’s take a look inside to see exactly how that works.

As one of the first people in the world with an Xbox Series X, I felt a responsibility to share as much info as possible about the device and its add-ons. And since I’m a grown man with an iFixit kit, I took charge of the situation and opened up the Expansion Card.

Shoutout to Jon over at Spawn Wave for giving me some pointers about this process.

I started by removing the plastic sheath, which clips around the metal. I then was able to pry apart the two pieces of the metal casing. This revealed the PCB screwed into one of the slabs.

After removing those screws, I found the heart of the Xbox Series X expansion storage.

That is a cluster of SK Hynix NAND Flash memory alongside a Phison PCIe 4.0 controller. Each of those components has a dab of thermal paste to create a strong connection to the surrounding metal.

So yes, the metal is definitely acting as part of the cooling for the Seagate Expansion Card. Expect this part of the card to get pretty hot — that’s normal. By getting hot, the metal is helping to vent the heat from the chips into the Xbox, and the Xbox can then push that heat up through its vent.

As for the chips themselves, the Phison controller is a welcome sight. This is its E19T PCIe Gen 4 controller, which is an early industry leader in reliable and speedy performance. 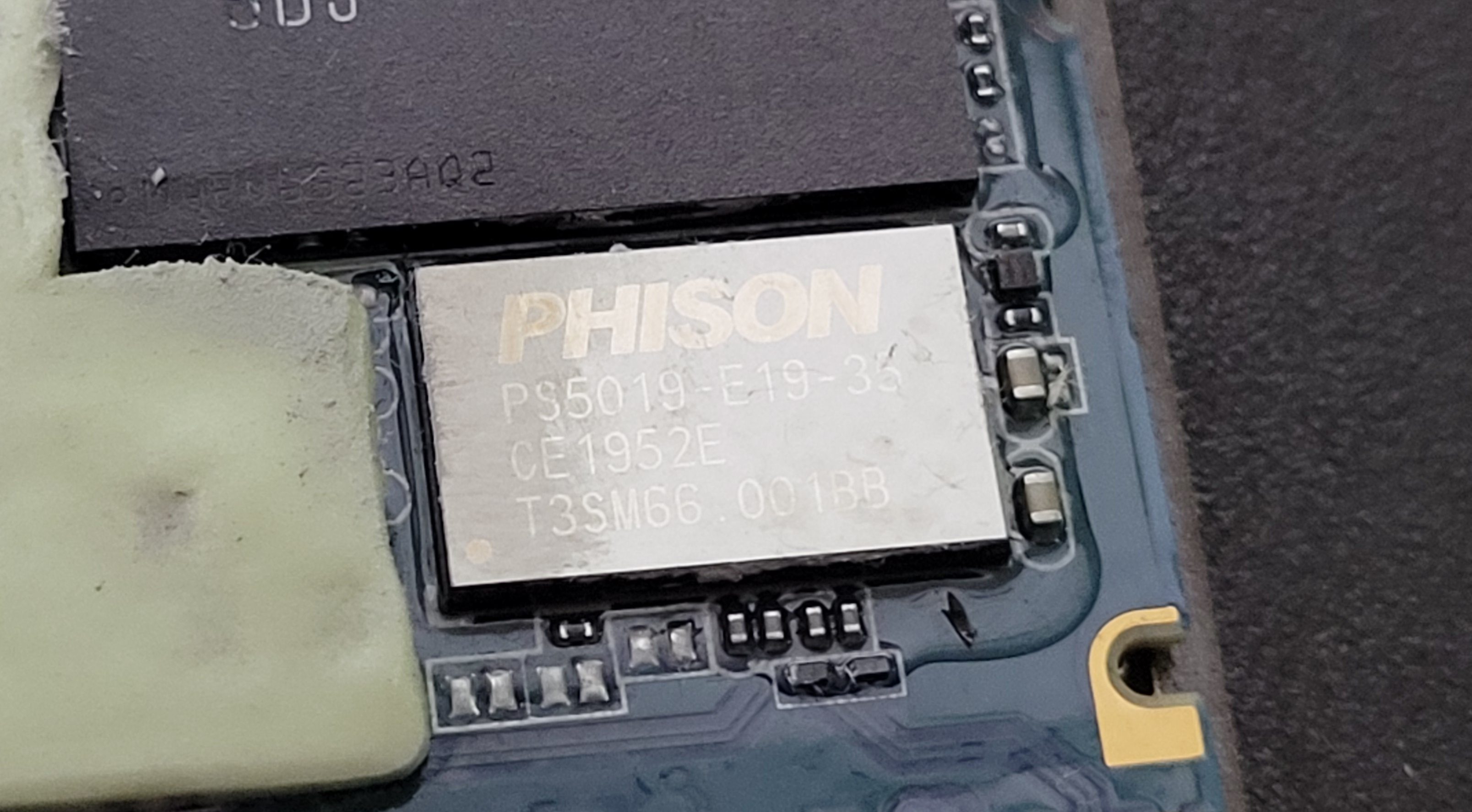 The memory itself is an SK Hynix 1TB chip. I’m not an expert on NAND, but I believe this is SK Hynix’s new 4D NAND, which stacks its memory cells in 128 layers. This is how Seagate was able to get 1TB of storage space onto a single chip inside such a tiny form factor. 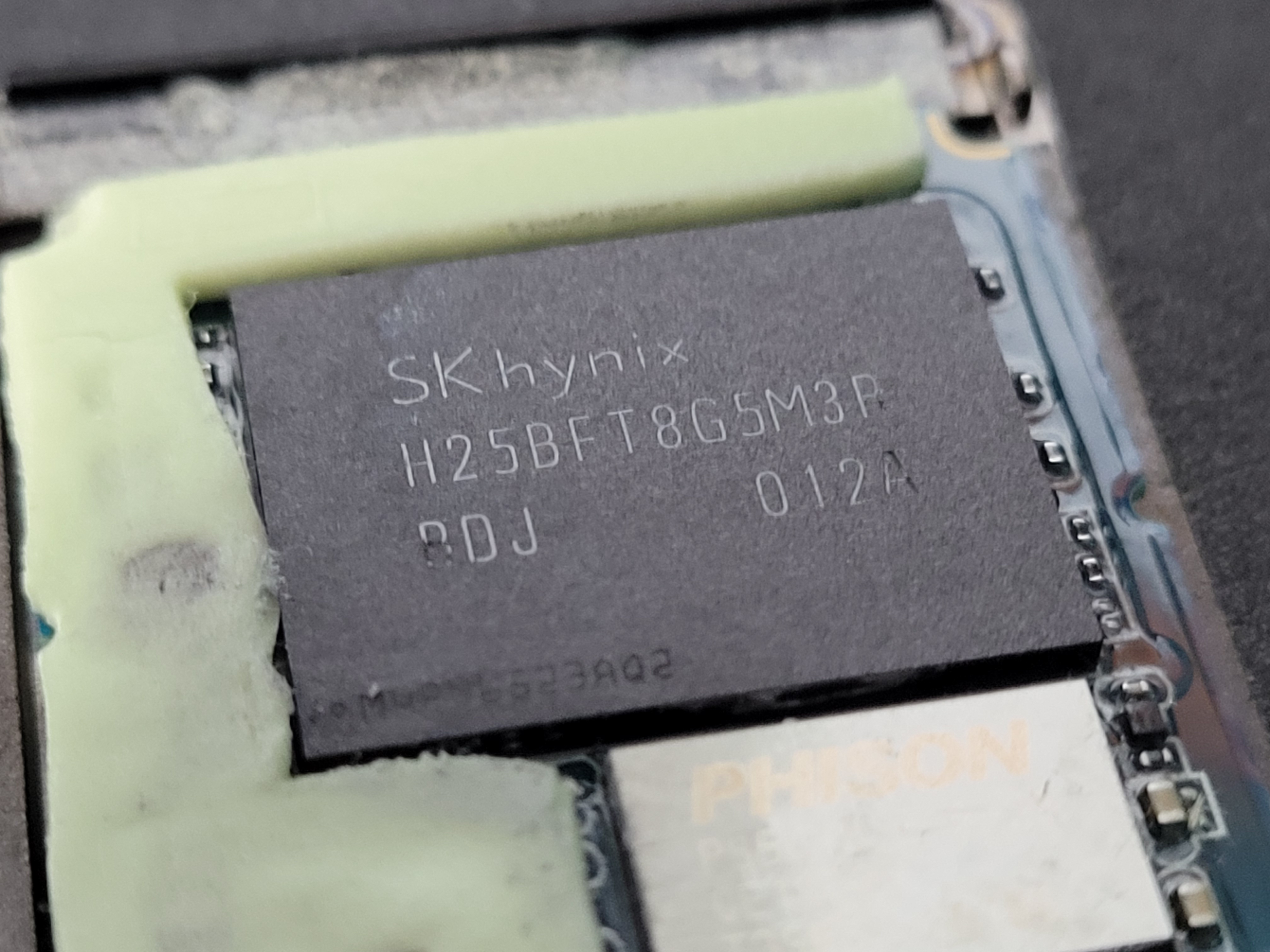 And all of this sits on a printed circuit board that uses the CFexpress connection standard. You can see that in the picture below: 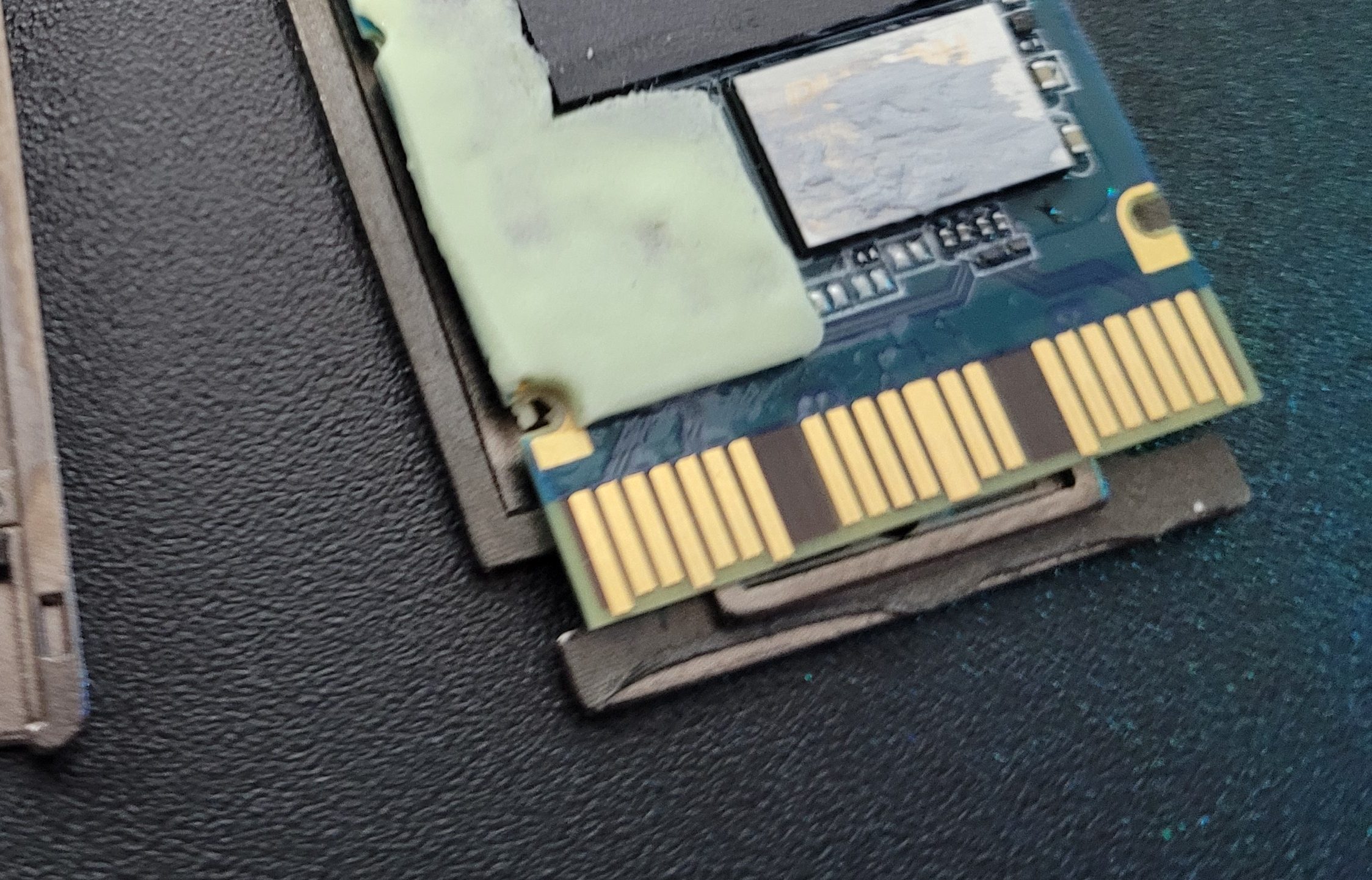 See how that matches up with a typical CFexpress card:

Standard CFexpress can transfer data at up to 4GB per second, but it’s possible that Microsoft’s custom implementation is faster. But 4GB per second would give enough room for the Phison E19T controller, which maxes out at about 3.75GB per second for read/write speeds.

After this teardown, the price of the 1TB Seagate Expansion Card seems fair. SK Hynix is selling a 1TB NVME SSD with read/writes of 3,500/3,200 MB per second for $135 that uses its 128-layer NAND. But that is in a larger form-factor PCIe 3.0 NVME. So it’s likely using two 500GB chips, and it definitely isn’t using the PCIe 4.0 Phison controller.

The Seagate’s $220 price makes sense when you factor in the increased performance and what is likely a custom implementation of CFexpress.

But fair price or not, $220 is a lot of money. Is it going to get more affordable in the future? It should. One of the major benefits of SK Hynix’s 128-layer NAND is that it significantly brings down productions costs. As manufacturing continues, the price of that Flash should come down quickly.

It’s also in Microsoft’s own interest to ensure you have enough storage. It wants you to subscribe to Game Pass, which has over 100 games. It doesn’t want you worrying about storage — it just wants you downloading the next game. So expect prices to come down.

I think we’ll see a 2TB option in the next year or so. The PCB seems like it may have room on the other side for another cluster of NAND. Maybe that launches at $220, and the 1TB option drops to something closer to $170.

So I would wait to buy expansion until you are sure you need it.