A few weeks ago I finished Yakuza Kiwami, and now I’m back in Kamurocho again. Here’s hoping this faster pace carries through the rest of the Yakuza ports, because I could get used to this. The six-month wait between Yakuza 0 last August and Kiwami in February was understandable. Ports take work, and all. But I much prefer the three-month wait between Kiwami and Kiwami 2. Hell, keep it up and we could have the whole series on PC by this time next year—and maybe Judgment, as well.

And hey, the PC’s not so far behind for once. Yakuza 2 initially released in 2006, but the Kiwami 2 remake’s actually the newest Yakuza game at the moment, having hit the PlayStation 4 in North America just last summer. We’re catching up!

Sins of the fathers

A lot changed between Kiwami and Kiwami 2. If you’ve been playing through the series chronologically, be prepared to be amazed because Kiwami 2 looks incredible. Yakuza 0 and the first Kiwami were both built on the Yakuza 5 engine, which was designed to run on the PlayStation 3. Kiwami 2 upgrades to the Yakuza 6 engine, native to the PlayStation 4, and it shows. 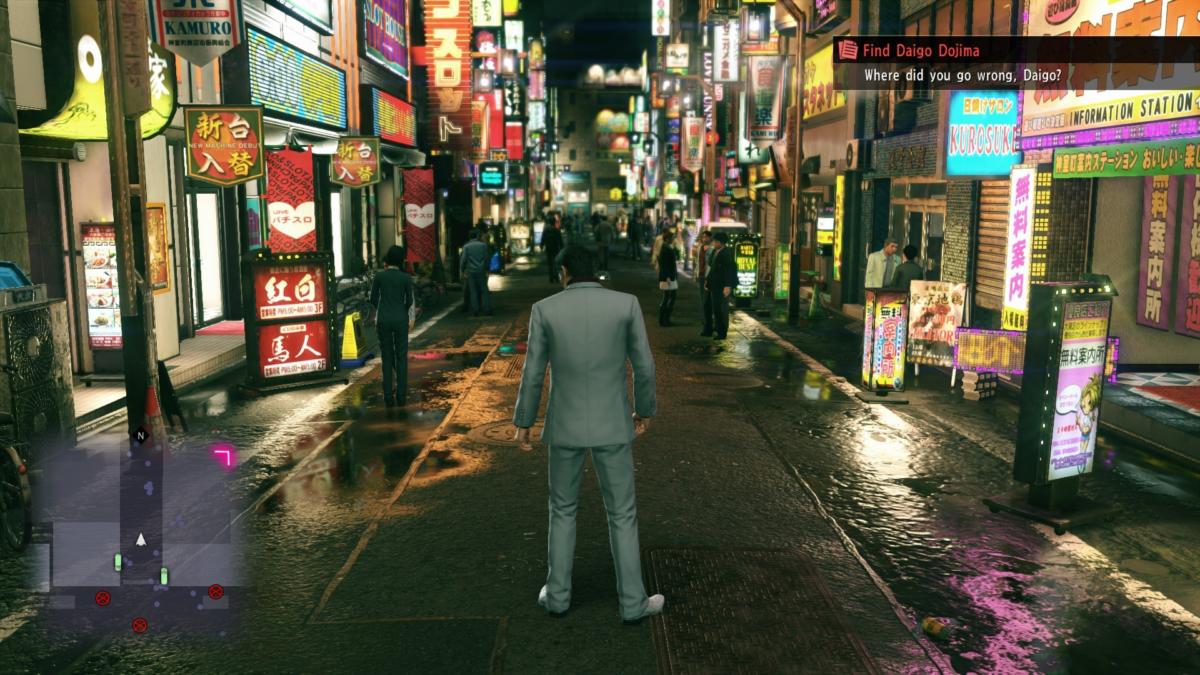 Kamurocho and Sotenbori, Yakuza’s fictional recreations of Kabukicho and Dotonbori, both appear as if they’ve been scaled up slightly to feel more city-like. The streets are bustling as well, with enormous pedestrian crowds and even rare automobile traffic at times. And then there’s the neon, so much neon, reflecting off glass and the streets and the water. Of course this has a huge performance impact, and even my GeForce GTX 1080 Ti has topped out around 70 or 75 frames per second in a lot of areas, running at 1080p Ultra.

But it’s very impressive, returning to the same maps I’ve already spent 50 or 60 hours on and seeing them given renewed life. It’s a byproduct of Yakuza’s commitment to continuity, which I talked about at length after starting Kiwami. Because this is the story of Kazuma Kiryu and Kamurocho, a man and his city, told over the course of seven different games, you really get a feel for these places. You begin to have a relationship with this five-block-by-five-block square of Tokyo the same way Kiryu does. Here’s the bar where we met a naive journalist all those years back. There’s the batting cages, where we taught a young Daigo Dojima to stop relying on his father’s name to intimidate others.

It’s a very organic form of memory that Yakuza builds up over time, a rich world with characters who drop in and out of Kiryu’s life, businesses that appear and disappear, buildings that rise and fall. And it feels somehow more real than your average video game because of that. 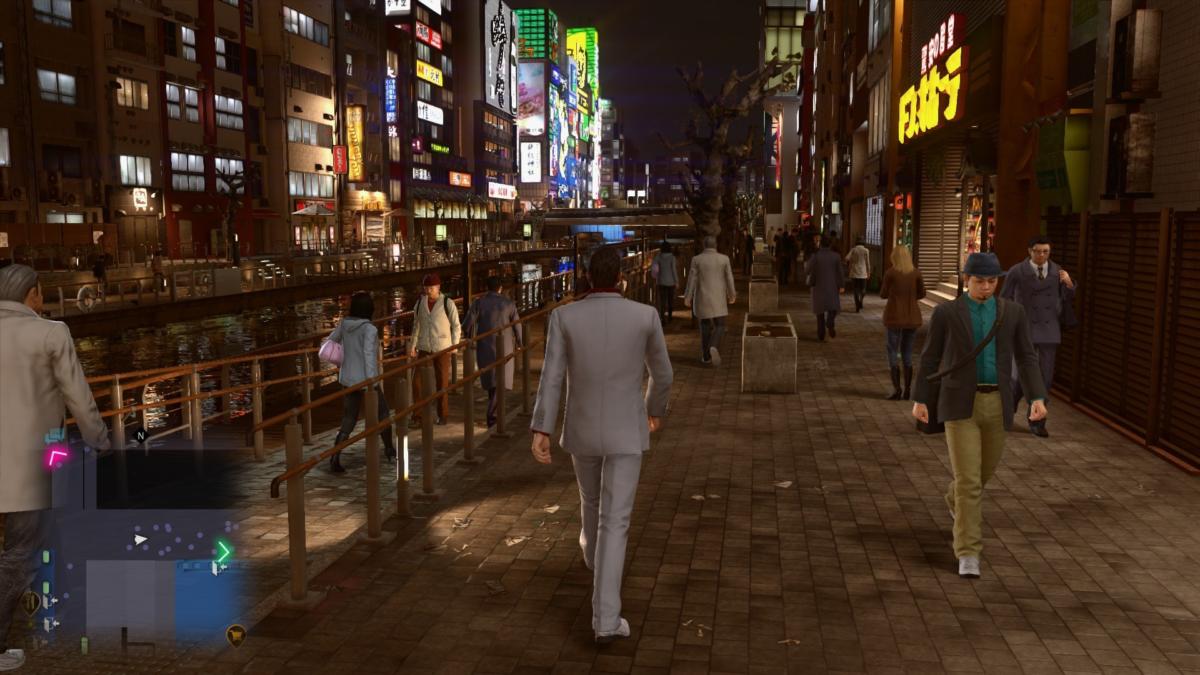 Reviewing 0 and Kiwami, I brought up The Witcher to explain how I like well-defined protagonists, and how that plays into my love for Kiryu—a character who sometimes acts differently than I might but is always true to his own code. The parallels extend to The Witcher’s wider cast as well though. Dandelion and Zoltan, Triss and Yennefer, it always felt like these characters drifted in and out of Geralt’s story in a naturalistic way, like they had lives separate from his monster-killer adventures. Yakuza’s the rare series that manages the same feat, with B-tier figures like Kashiwagi and Daigo and Date feeling as if they have just as much depth as Kiryu himself. It’s no small feat.

That said, I can’t say I’m as enamored with Kiwami 2’s overarching story as I was with 0 and the first Kiwami. It’s a very uneven journey. Set a year after the first Kiwami, Kiryu’s abdicated responsibility for the Tojo Clan and become a pseudo-father to Haruka, the girl he helped protect from scheming yakuza the last time around. The Tojo Clan’s slowly tearing itself apart though, and before long the Omi Alliance is once again threatening to move into Kamurocho and take over.

Kiryu has to essentially come out of retirement to save everyone again, and as you might expect it’s not as simple as it seems. Secret plots! Secret fathers! Secret Koreans! Secret teenage guilt! Secret bombs! Secret…tigers?

The stakes are high, and I’m not as interested in that version of Yakuza. Writing about 0, I pointed out how small the conflict was: Two regional powers fighting over a seemingly insignificant patch of real estate. There was real mystery there and it kept the story grounded. Kiwami 2 has three or four different (barely related) villains, each with their own (barely explained) motives, and it doesn’t feel like it comes together as cleanly at the end as the previous two entries. It mostly feels like nonsense, twists for the sake of twists. 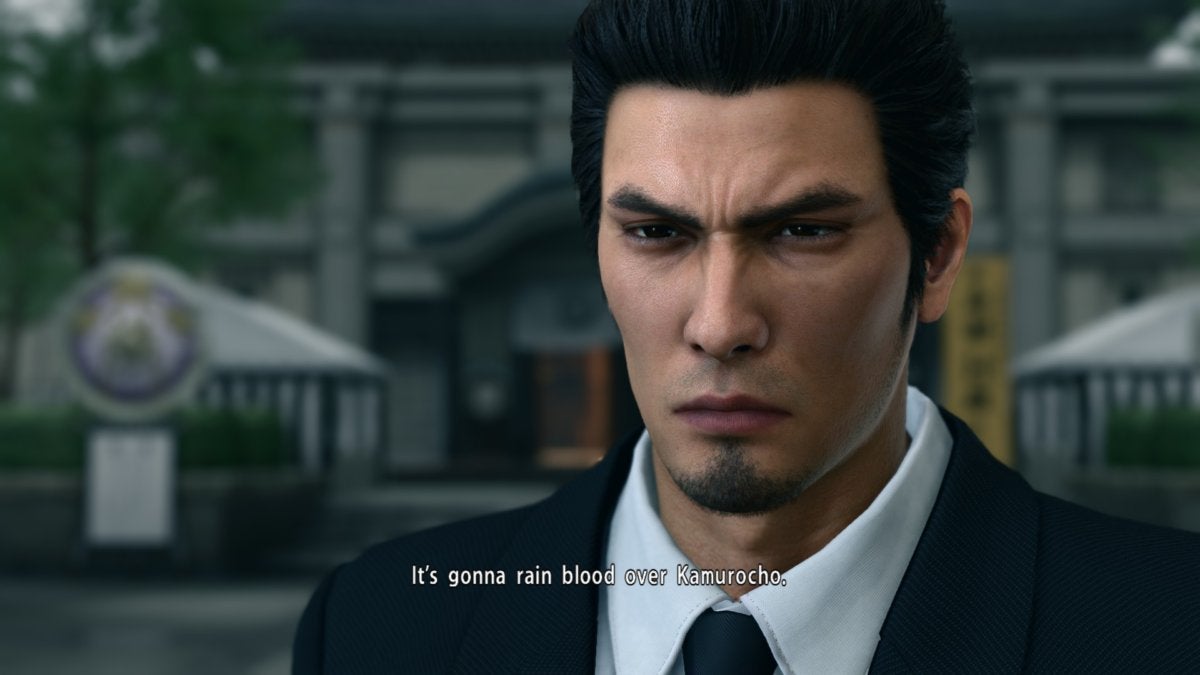 To be clear, both 0 and Kiwami have their fair share of over-the-top soap opera antics as well, but 0’s plot is strong enough (especially Majima’s side) to balance it out, and Kiwami has the benefit of an entire prequel’s worth of emotional investment to carry its more loaded character moments.

Kiwami 2 lacks both in my opinion. The main villain Ryuji Goda is a fantastic foil but he’s underutilized (as are most of the better characters). He doesn’t have enough screen time to develop into a rich villain like 0’s Kuze, to say nothing of the emotional investment in Nishikiyama’s fate by the end of back-to-back 0 and Kiwami playthroughs. That absence makes the faction politicking less satisfying this time around, even if the conflict is more dire. I’m also finding it hard to move past a really goofy scene involving Osaka Castle—like, goofy even by Yakuza standards.

At the end of the day even a bad Yakuza story is better than most games though. Kiryu’s story is less traumatic in Kiwami 2, but he still manages to deliver some excellent monologues amid the chaos. His somewhat-parental relationship towards Haruka is a constant undercurrent, an exploration of whether he can balance his personal relationships with duties that often put them in jeopardy—a particularly poignant theme in the aftermath of Kiwami and the loss of almost everyone Kiryu loved. 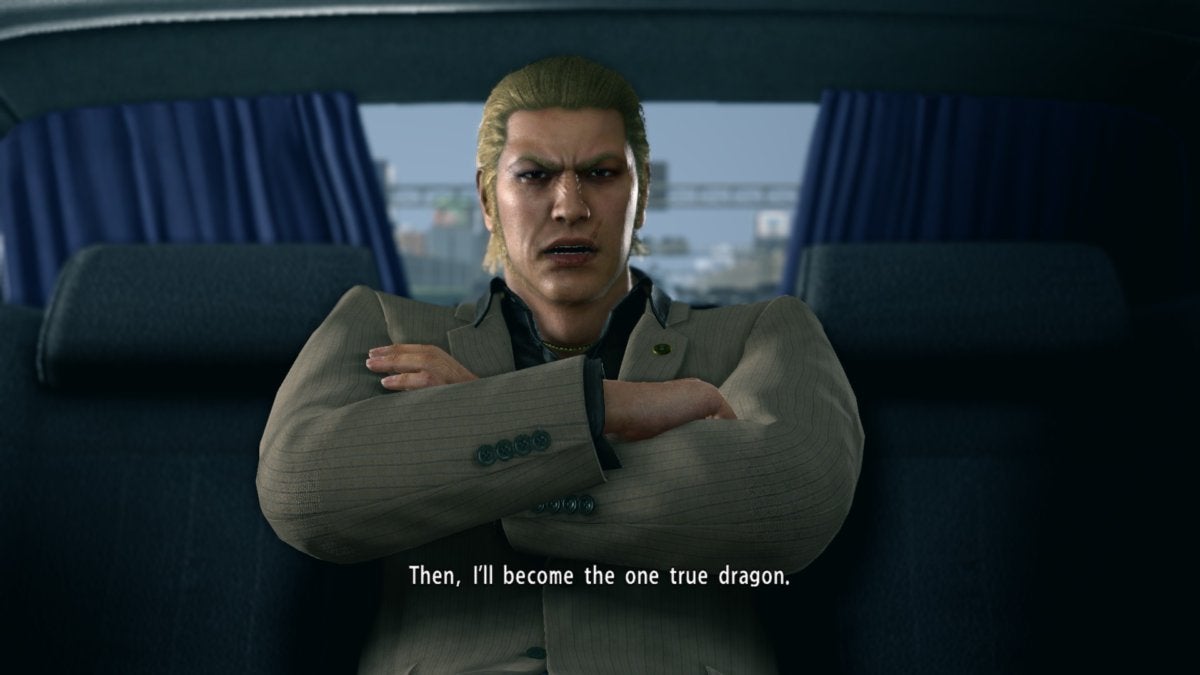 The side stories are better than the main this time too, with plenty of entertaining cameos alongside more serious fare. A random guy dressed up as Fake-Kiryu is a fun one, as is a group of men behaving like…well, I wouldn’t want to spoil it. Oh, and Majima has some classic moments, even though he doesn’t show up nearly enough in Kiwami 2.

Point being there’s good stuff here, even if it’s not the main focus.

Perhaps the most welcome change is the elimination of loading screens. I loved Yakuza 0 and Kiwami, but every time you entered or exited a building you sat through a load, even on an SSD-equipped PC. Kiwami 2 is seamless in all but a few instances, allowing you to enter restaurants, bars, batting cages, karaoke clubs, or simply wander through the rare building interior without ever hitting a loading screen. Even fast travel is handled with just a quick fade to black and back. 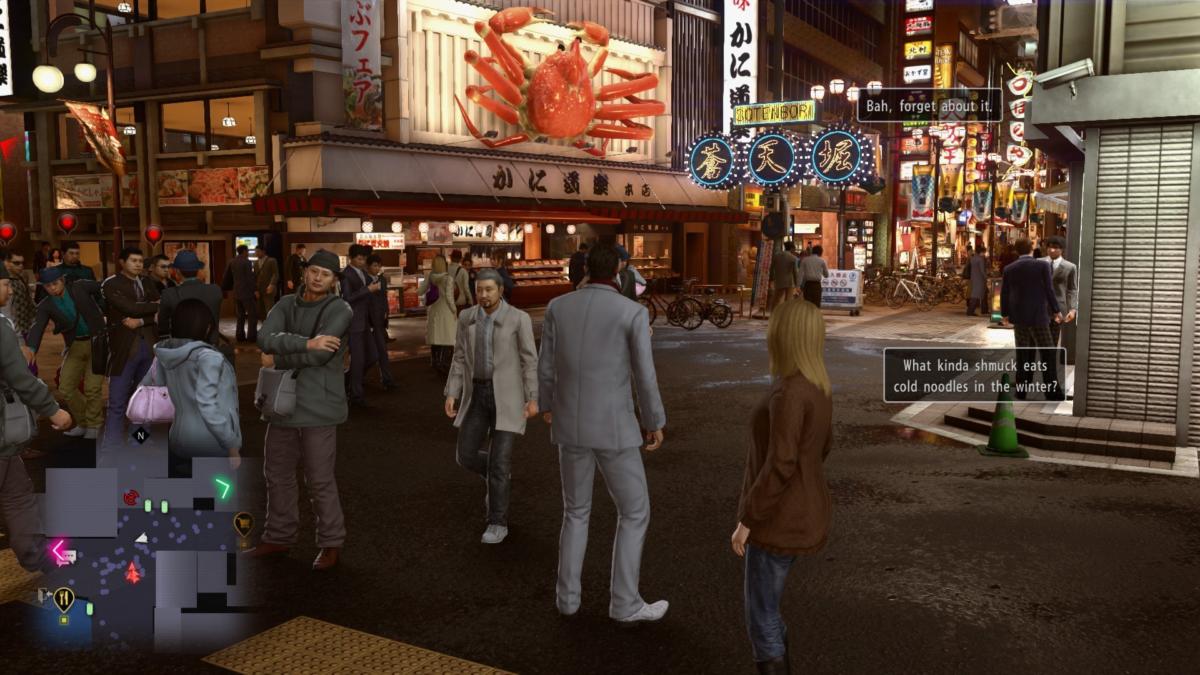 Fights are smoother as well. There are no longer lengthy preroll cutscenes before every fight to mask the transition, nor are you locked in small walled-off arenas. You transition straight into combat now, and are given a huge area to roam around in while taking on foes, giving you more than enough bicycles and traffic cones and planters to pick up and use as makeshift weapons. Then at the end, it’s straight back into the game and you’re free to proceed to your next objective.

And this one sounds small, but if you’ve played 0 or Kiwami you know how important it is: The map is finally usable. Not only can you place custom guide markers on Kiwami 2’s map, but there’s even a skill that highlights side missions so you’re not stuck wandering at random (or more likely consulting a walkthrough for the ones you’re missing).

It’s just a fantastic quality-of-life upgrade over 0 and Kiwami. Not like those were unplayable, mind you. I had a great time with the previous games despite the jank. But Kiwami 2 demonstrates how much games, especially open-world games, have progressed over the course of this console generation. Remember when Assassin’s Creed: Unity implemented seamless building interiors and it was a huge technical achievement? Now look at us. 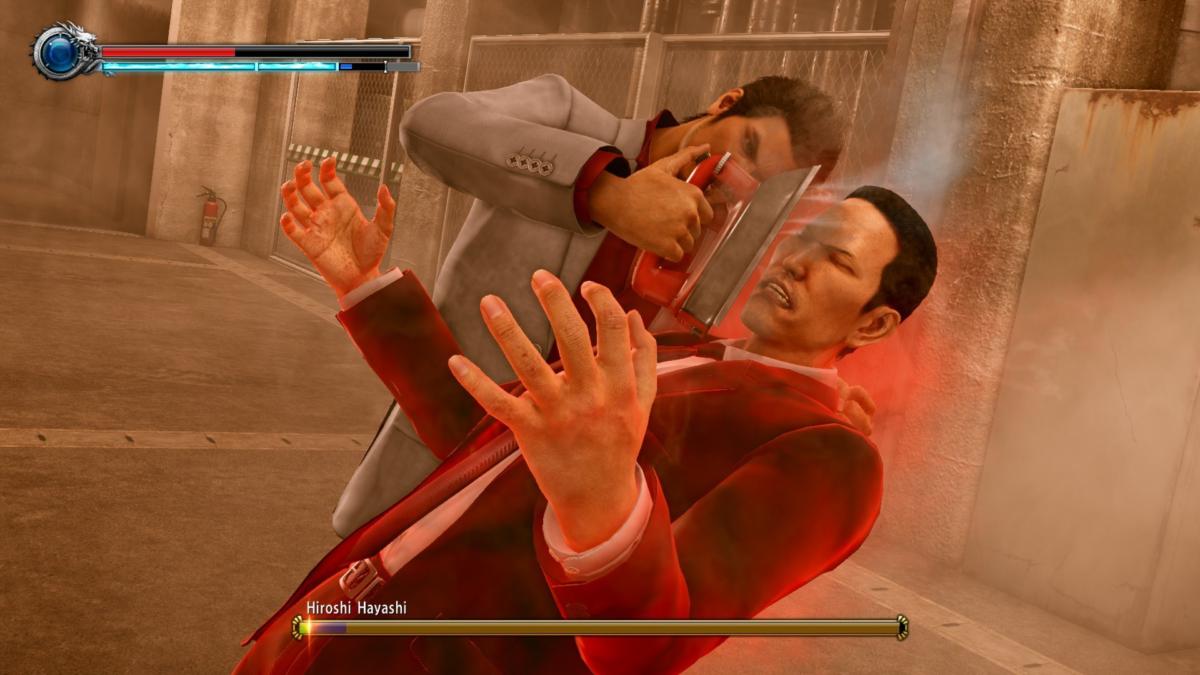 Don’t dismiss them as purely technical improvements either. It’s more important than that, in a series like Yakuza that strives to create a living world for the player. Investing in Kiryu’s story is a lot easier when the game’s not constantly pulling you out of it to sit through loading screens or clumsy pre- and post-combat scenes.

There are other changes I’m admittedly not so fond of, including the new physics-based combat system. It’s very limited compared to 0 and Kiwami, and Kiryu ends up using the same three or four combos for most of the game. It’s also wildly unpredictable, with enemies ragdolling all over the place and Kiryu too often getting locked into a loop of getting up and being pummeled back down before you can react. The accompanying leveling system is pretty uninspired as well compared to 0’s “Invest In Yourself” trees, where your currency doubled as experience points.

But overall, Kiwami 2 plays better. It’s a smooth, modern-feeling experience—more even than 0 and Kiwami, which already felt eminently playable, especially given the latter was a remake of a decade-old game.

Ultimately Yakuza Kiwami 2 is more Yakuza. It’s more of Kiryu and Kamurocho, more beating up random street ruffians and more plot twists. The latter aspect’s a bit weaker this time around, but this being the third game to hit PC I imagine you already know whether you’re in for it or not. This is certainly not where you should start the series. That’s still 0 if you can deal with a slow ramp-up, or Kiwami if you want a tighter 20-hour experience. Either way, by the time you’ve finished those you should know exactly where you stand for Kiwami 2.

Judging it on those merits, Kiwami 2’s been my least favorite story but my favorite to play, which makes it a bit of an oddity to review. I had a good time with it though, and I’m still looking forward to continuing Kiryu’s journey as soon as Sega gets around to porting the rest. I’m in this for the long haul.