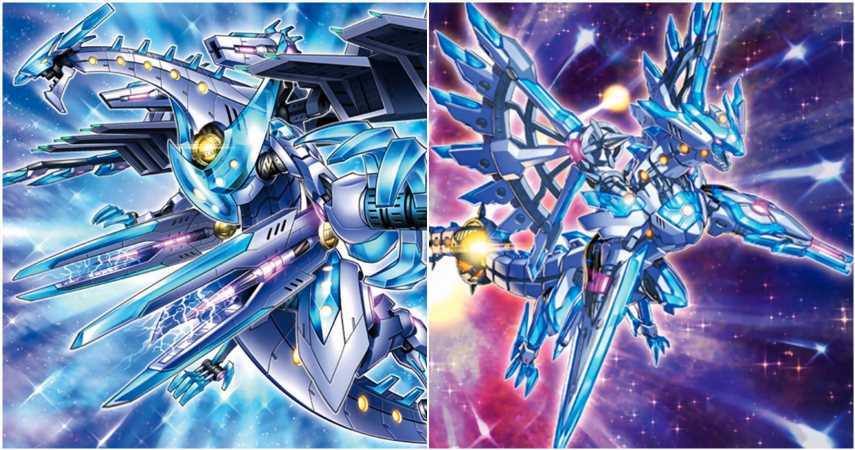 Yu-Gi-Oh! Master Duel is the main way to play the card game in an all-virtual capacity. It is the first official simulator with TCG and competitive play in mind, opting to not take inspiration from the anime this time around. With practically every card ever released in the game, finding a deck can be tricky.

Right now, one of the best decks in the format is Drytron. They are a set of Machine Monsters, all built around cheating out Ritual Monsters. This can be used as a generic Ritual engine, allowing for the use of powerful Ritual Monsters that would otherwise be near-impossible to summon. 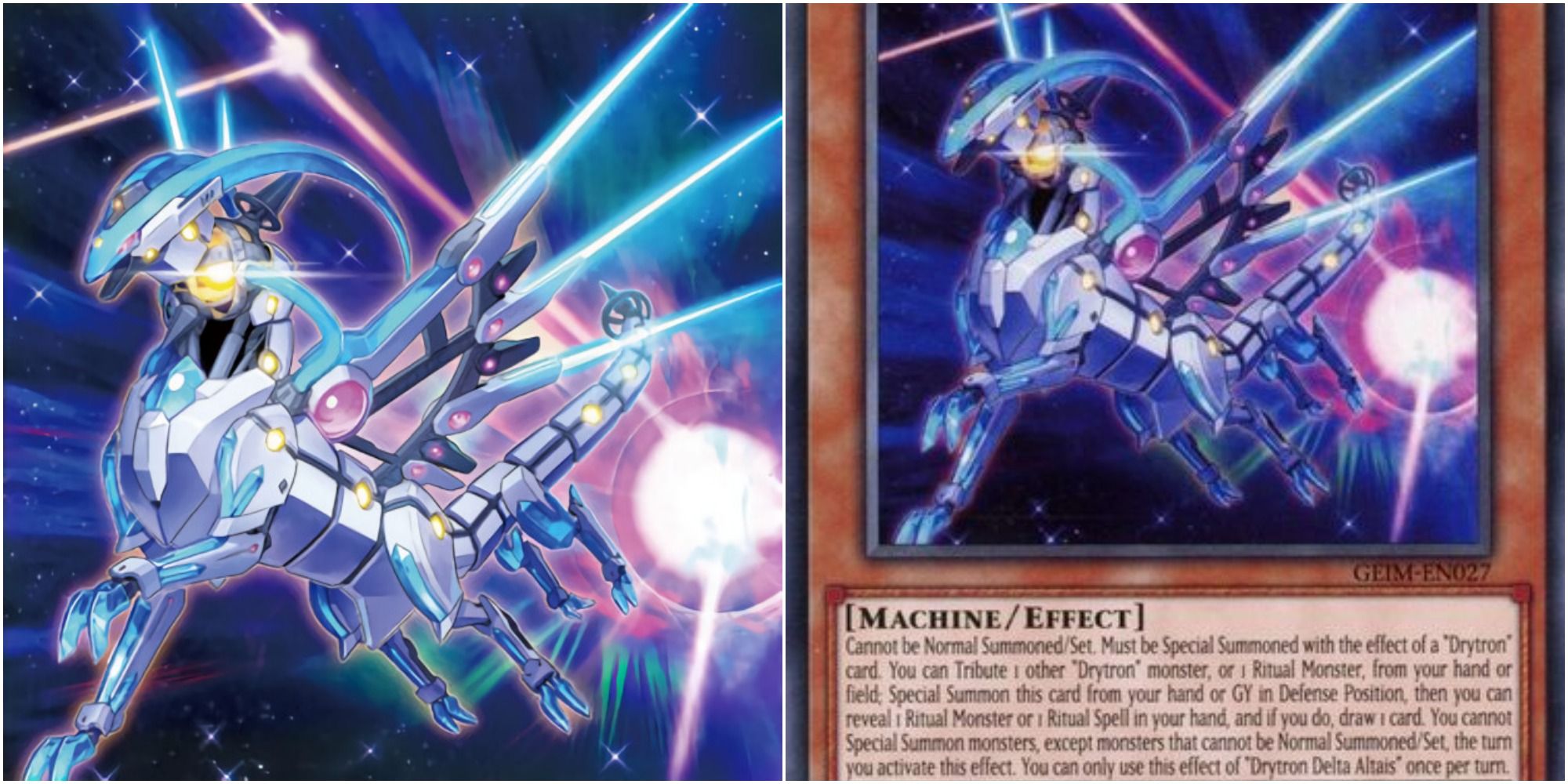 Drytron Delta Altais might be the weakest of the Drytron Effect Monsters, but it still is a fantastic card. All Drytron Monsters can easily be searched out and thanks to their statline, every Drytron card is useful for their main gameplan.

When Drytron Delta Altais is summoned, you can reveal a Ritual Spell or Monster in order to draw one card. While this effect isn't quite as good as the other Drytrons, drawing cards is never going to be a bad thing in any deck. It's important enough to carry a couple of these in any Drytron deck. 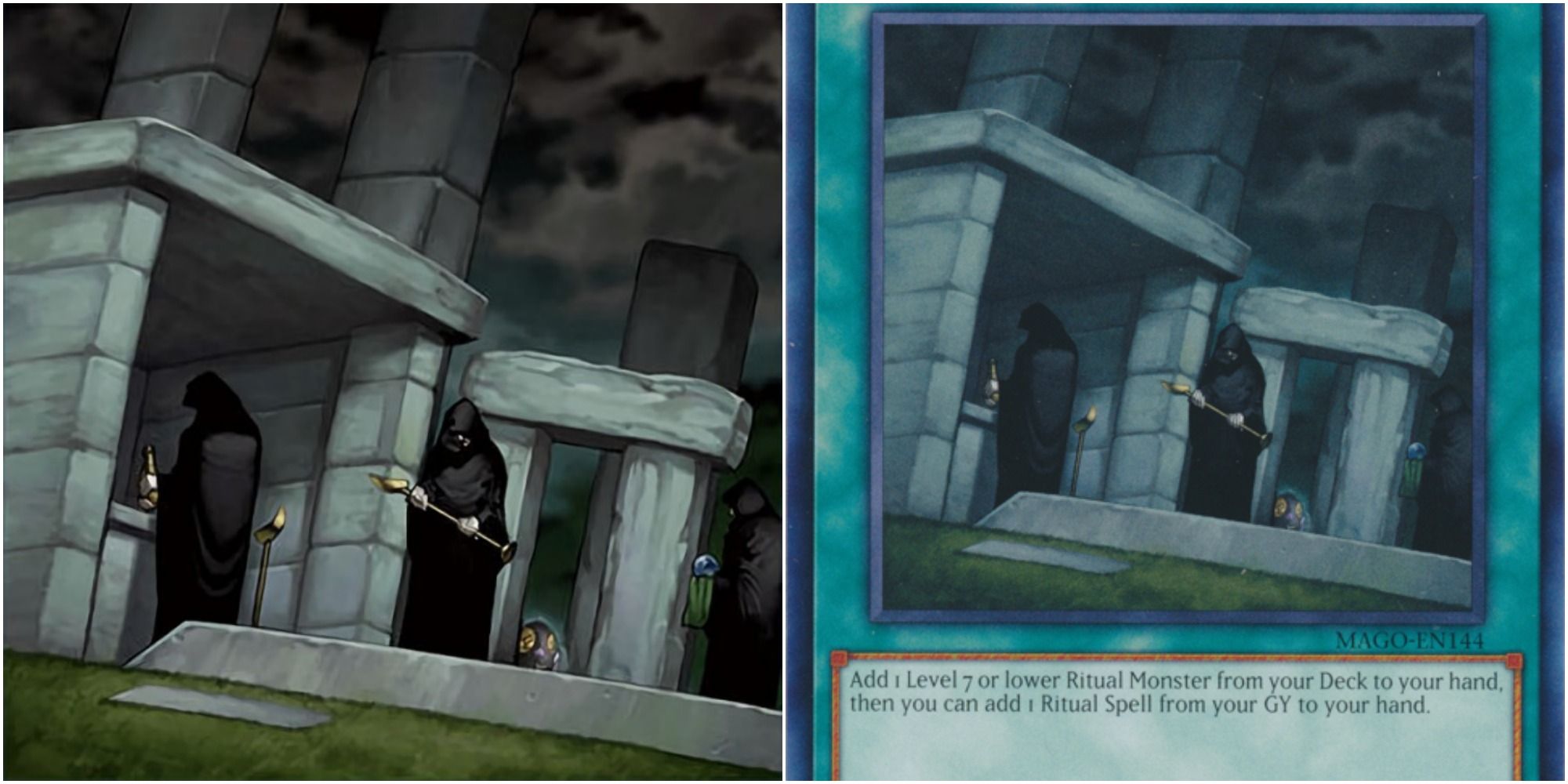 While Preparation Of Rites is not strictly a Drytron card, it is one that the Drytron decks can abuse to make it an honorary member of it. It is a simple searcher, allowing you to add a Level Seven or lower Ritual Monster from your deck to your hand.

This restriction can search out many of the key Ritual cards that Drytron decks want to be summoning. Since there are no activation requirements, once per turn clause, or downsides, practically every Drytron deck wants to have three in their deck. 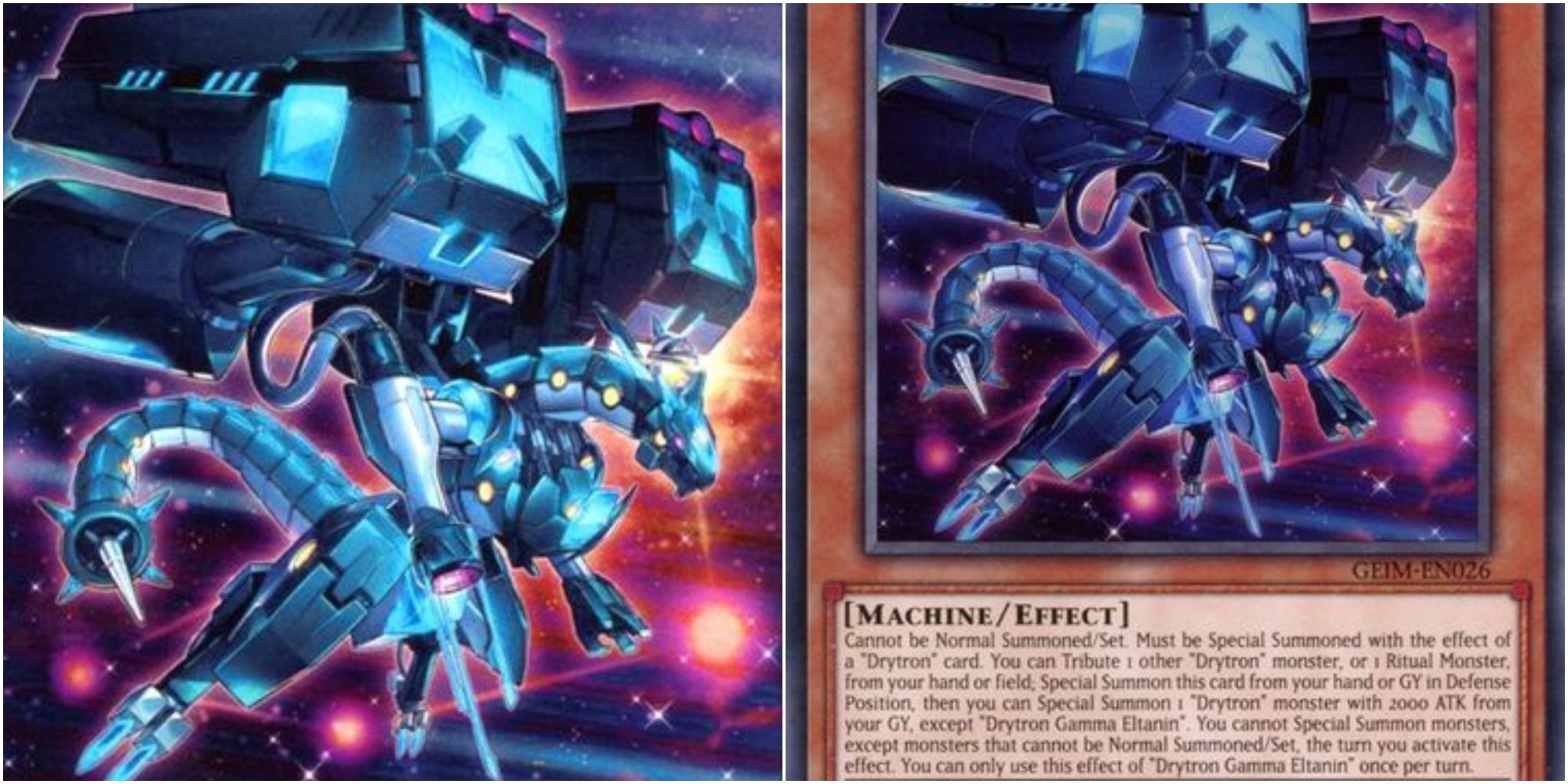 Drytron Gamma Etanin is a card that can easily help build up your board state. When its special summoned by its own effect, you can bring back any Drytron Monster from your Graveyard, including the one it just had to tribute.

Drytron Gamma Etanin needs another Drytron to make it work to its fullest potential, but when it can, it makes for a fantastic way to get an early head start and the board state without committing too many resources. It's perfect for Drytron builds that look to set up tribute summonable Floodgates like Vanity's Ruler rather than Ritual Summon. 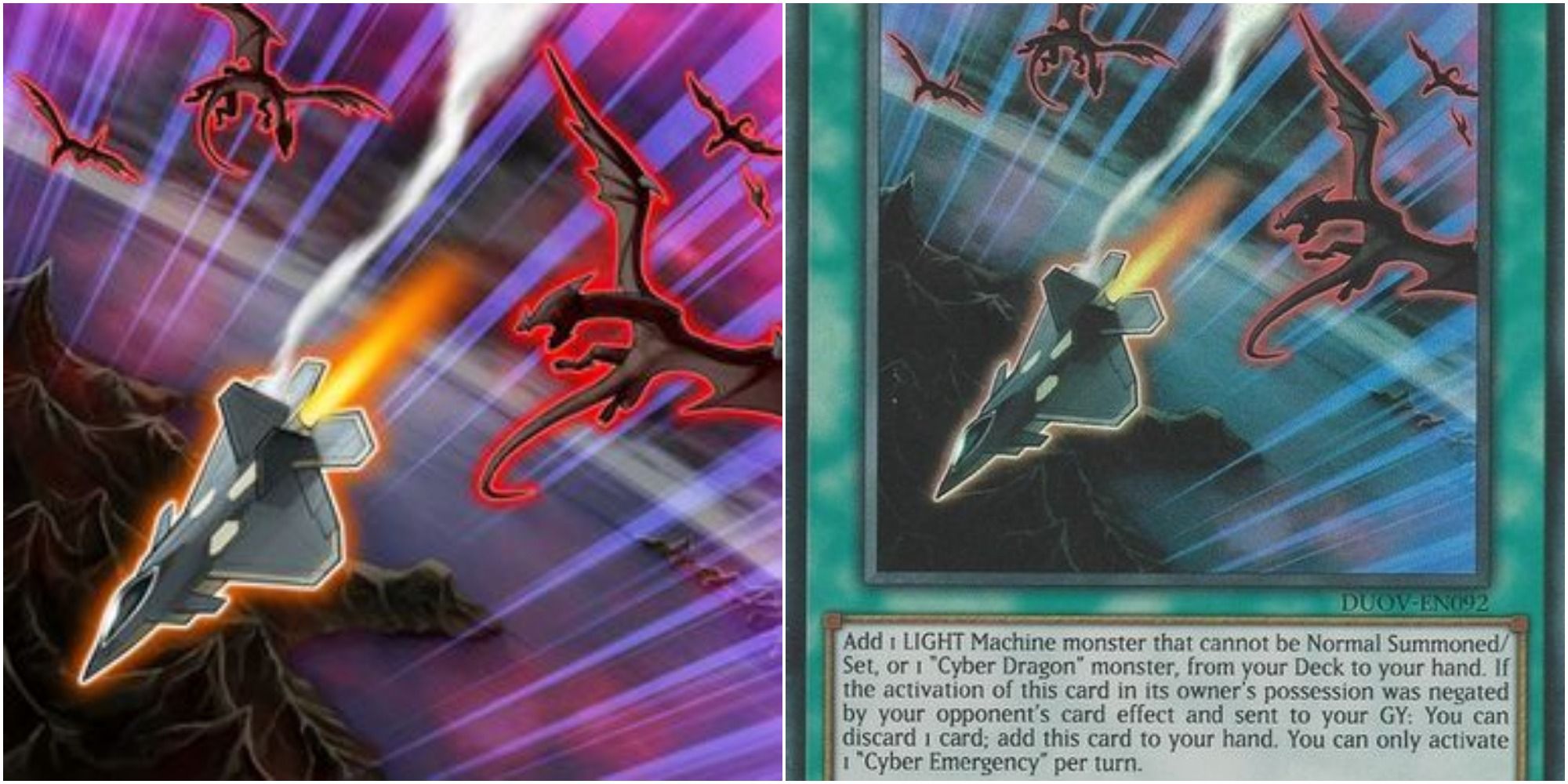 While Cyber Emergency is a card originally printed with Cyber Dragons in mind, Drytron can take full advantage of it. Cyber Emergency can search out any Light Machine Monster that can't be Normal Summoned or Set, which none of the Drytron Monsters can be.

This makes Cyber Emergency a generic searcher for the Archetype, allowing you to fetch out any Drytron that you need at any given moment. If the opponent tries to negate the activation, you can discard a card to bring Cyber Emergency back into your hand to try again. 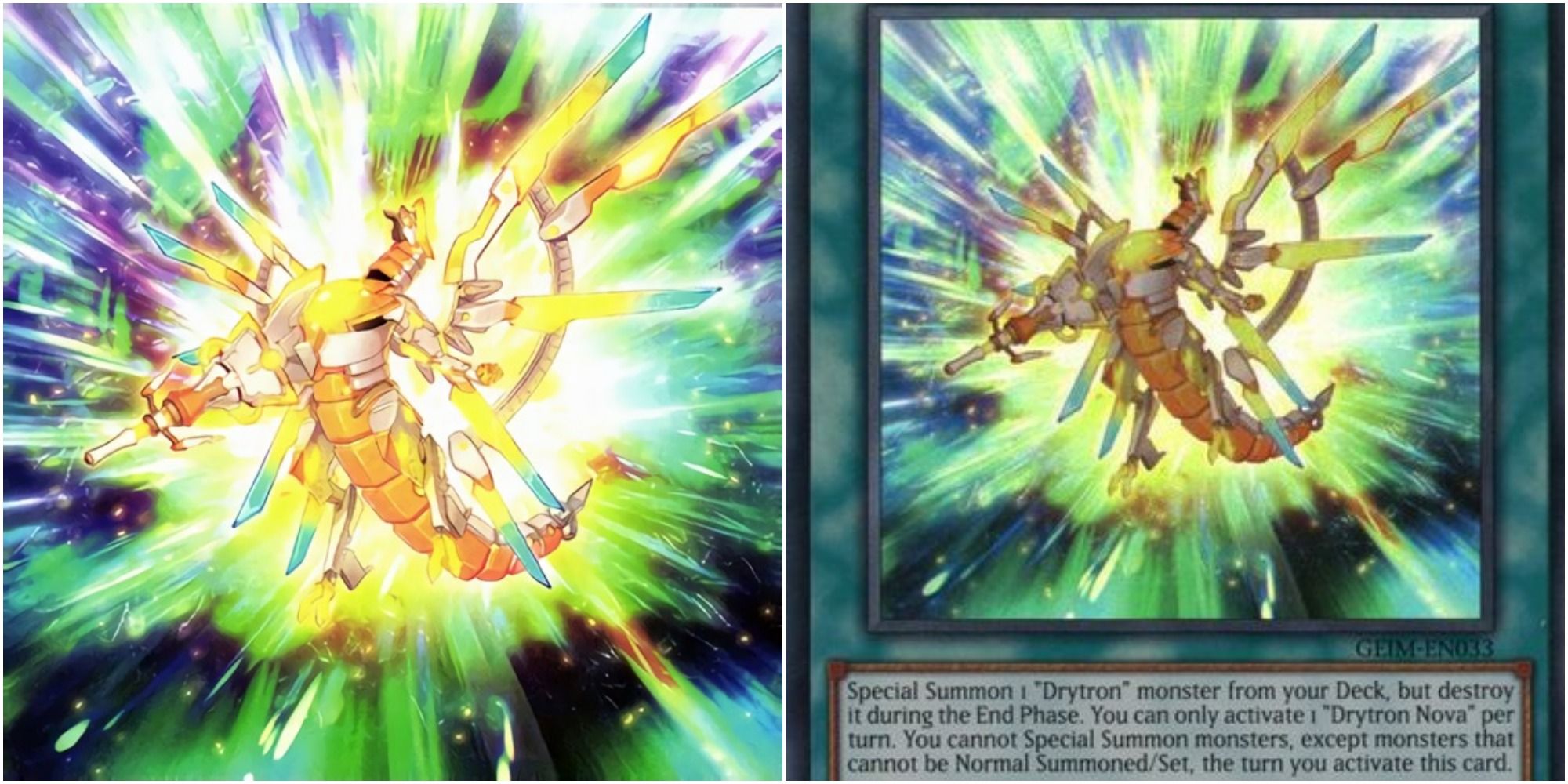 Drytron Nova is a pseudo-searcher card. It special summons any Drytron Monster from the deck, but destroys it at the End Phase. This destruction is never going to happen, as it'll be used way before that time. Since all Drytron Monsters can activate their effects in the Graveyard, you can use Drytron Nova to get a Drytron with the effect you need.

Special summoning from the deck in general is one of the best effects in the game. It does lock you into Monsters that can't be Normal Summoned or Set, but for Drytron, this is a non-issue as that's the whole deck. 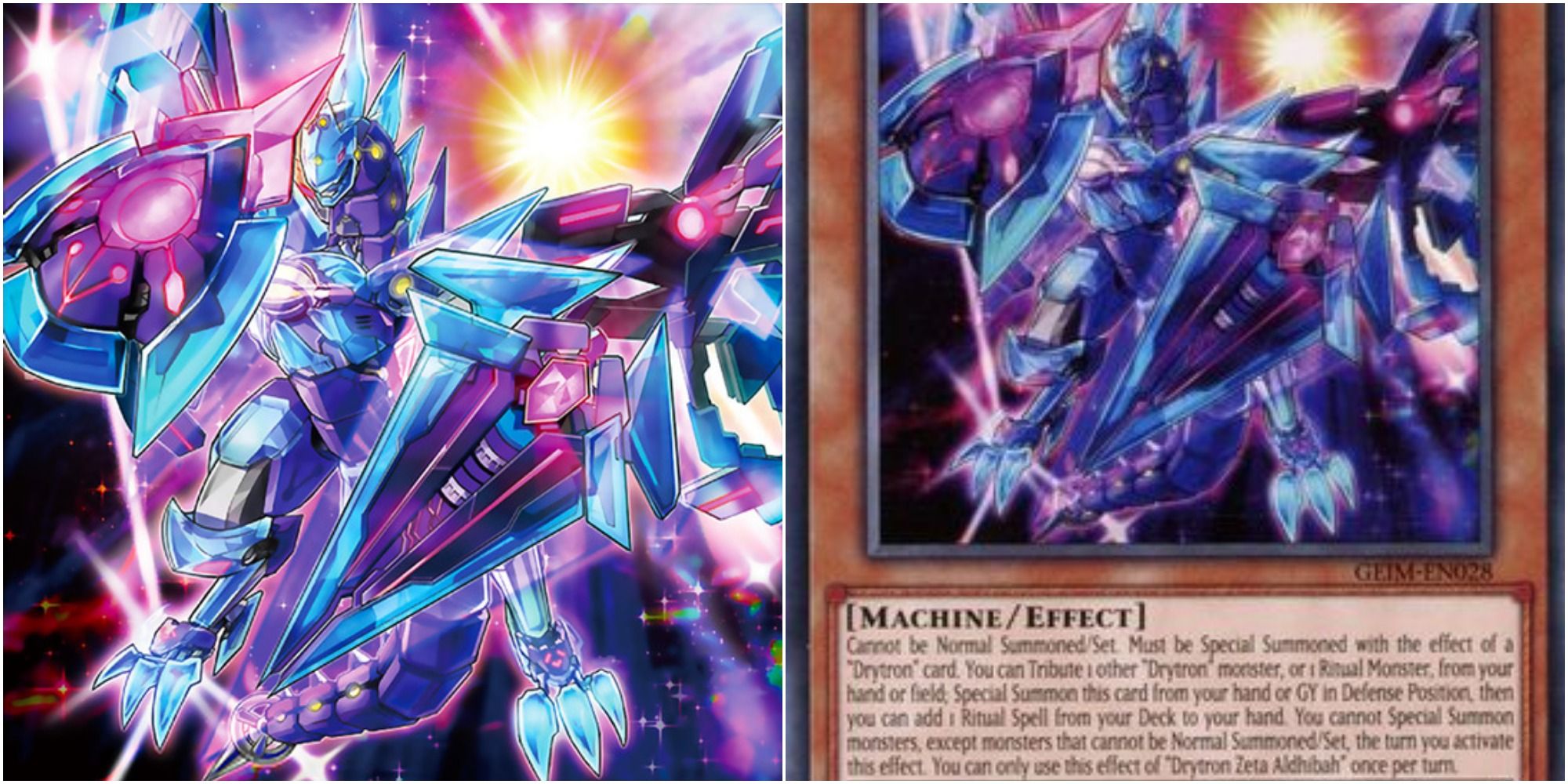 What makes Drytron Zeta Aldhibah so good is that it can search out any Ritual Spell, not just a Drytron one. This allows Drytron decks to play with other Ritual engines, most notably Cyber Angel and Herald Ritual Spells and Monsters. 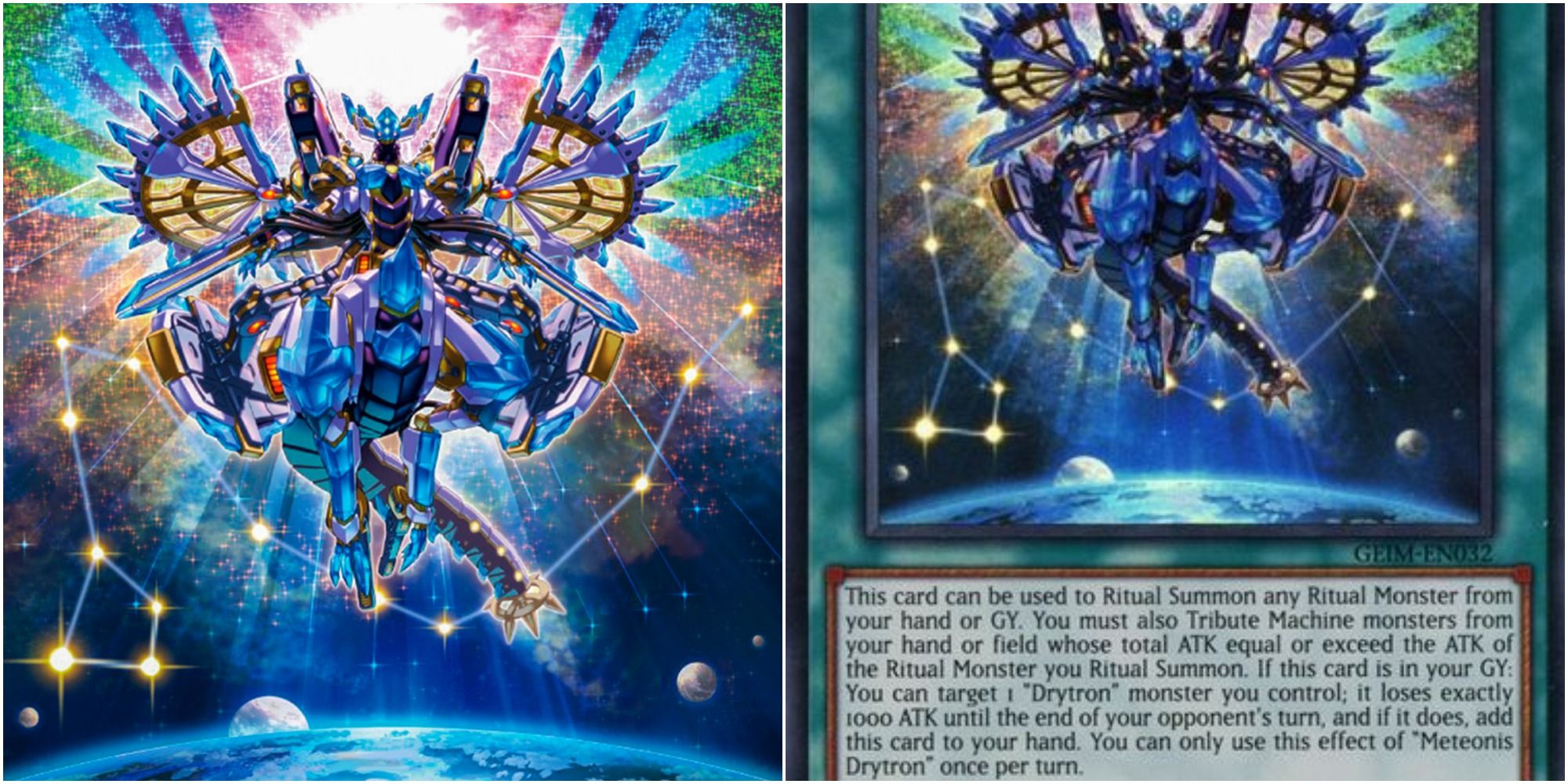 Meteonis Drytron is the in-Archetype Ritual Spell, and one of the main reasons the deck has legs. Ritual Monsters are best when you can cheat around their tribute conditions, which Meteonis Drytron allows you to do. 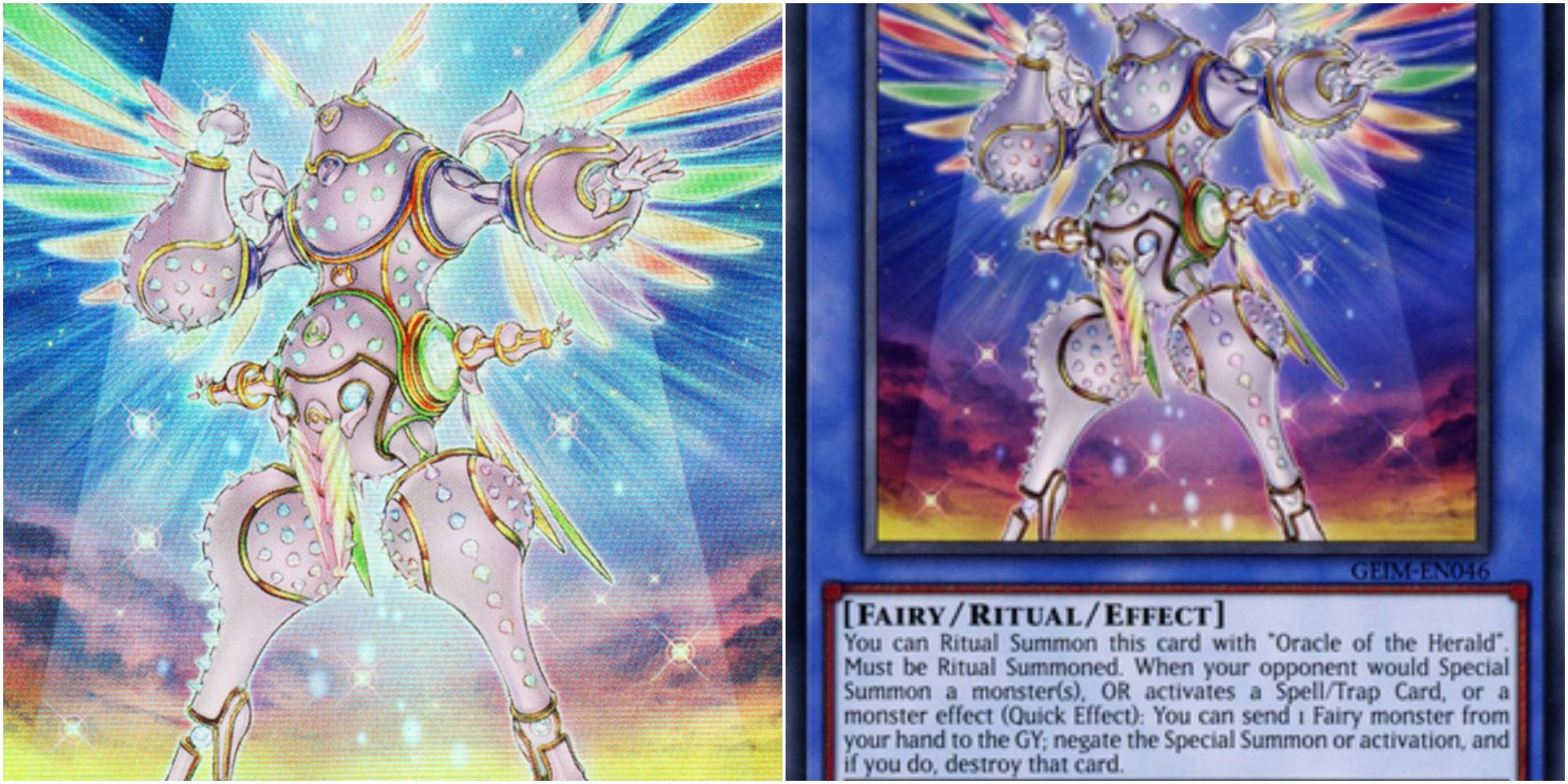 Another honorary member of the Drytron lineup, Herald Of Ultimateness serves as its main Boss Monster. It synergizes so well with Drytron, with practically every build being made with the purpose of bringing this card out as fast as possible. It's a Level 12 Ritual Monsters which would normally be hard to summon, but thanks to Drytron can be made with just one Monster thanks to Meteonis Drytron. 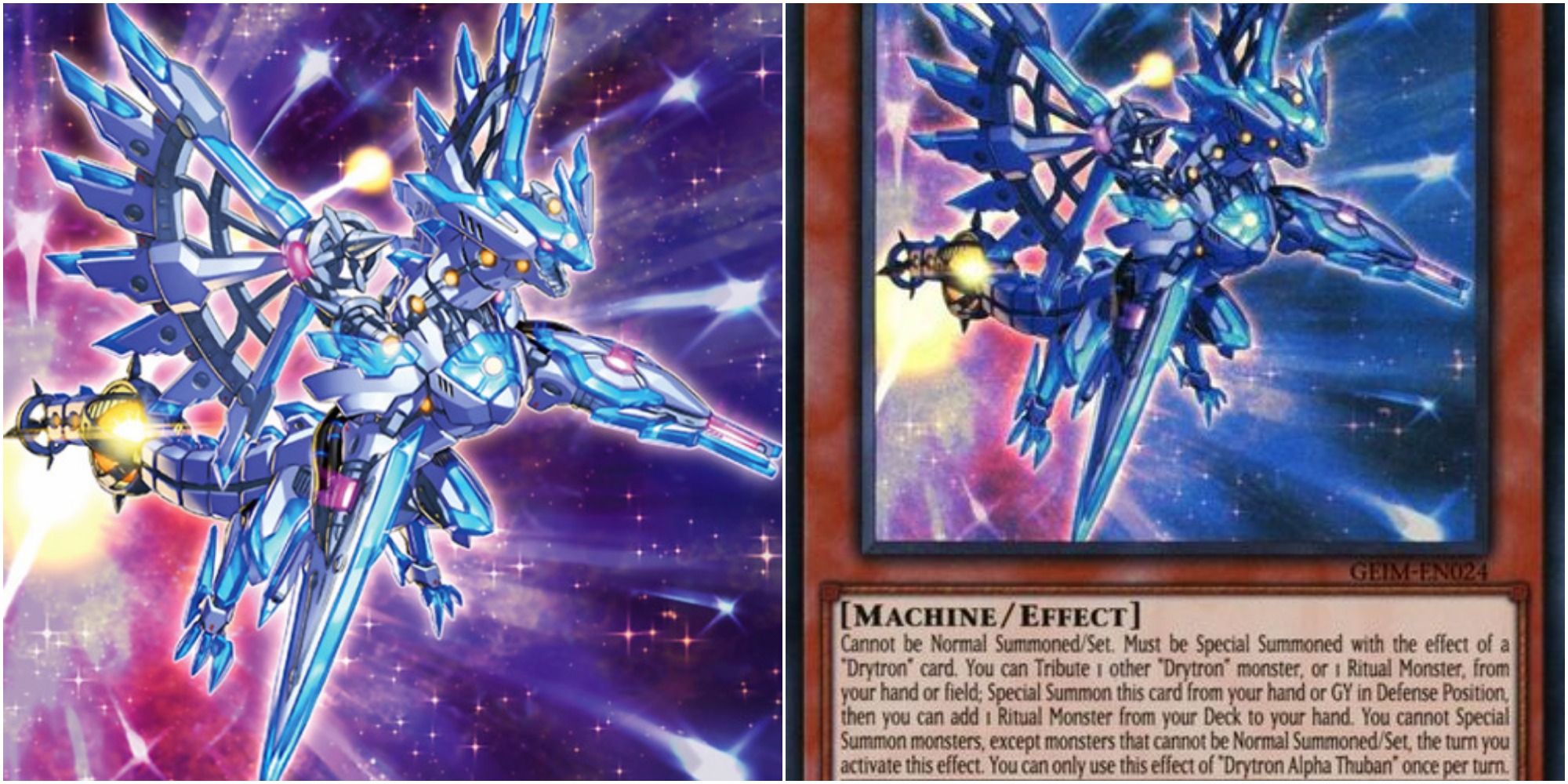 Drytron Alpha Thuban is the primary Main Deck card that you'll generally always want to be searching out. This is because it's the main way to get Ritual Monsters into your hand easier. When combined with the other Drytron cards, it makes for one of the shining stars of the Archetype.

Drytron Alpha Thuban searches out any Ritual Monster without restriction, meaning Level, Archetype, or anything else does not matter. It's the key card that allows Drytron to be such a powerful Ritual Engine. It's the only non-Ritual SR card in Master Duel for Drytron, helping contribute to a cheap build. 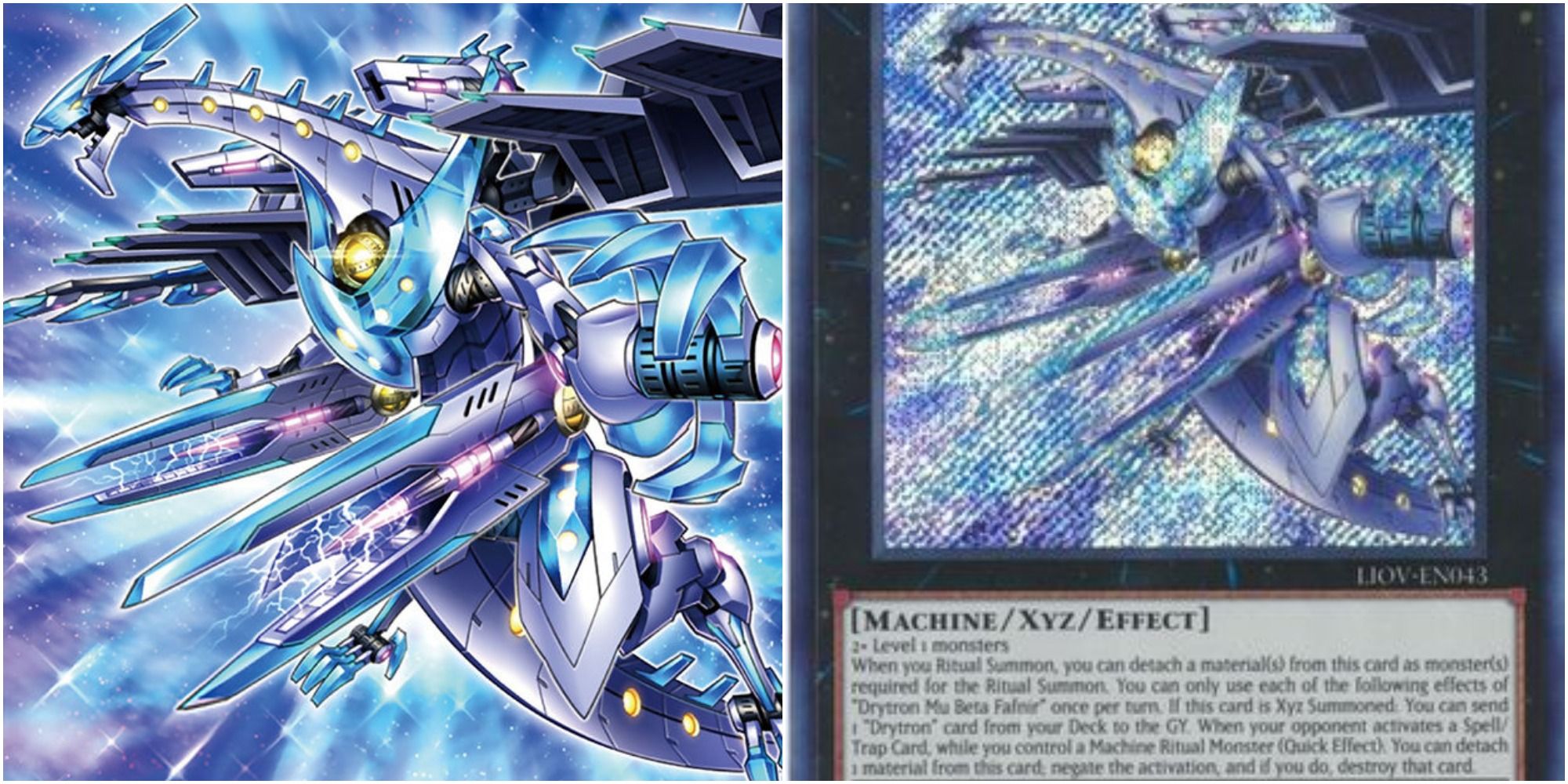 The sole Extra Deck Monster in Drytron also happens to be the best card in the Archetype. It only needs two (or more) Level One Monsters, which all Drytrons are. Once it hits the field, Drytron Mu Beta Fafnir is good for offense and defense.

Whenever you Ritual Summon, you can detach a card from it to pay for the cost, essentially acting as if the Monster was on the field to begin with. Not only that, if you have a Machine Ritual Monster on the field the materials can be detached to negate the Spell or Trap card activation of an opponent's card. It even acts like a Foolish Burial by sending a Drytron Monster from the deck to the Graveyard.