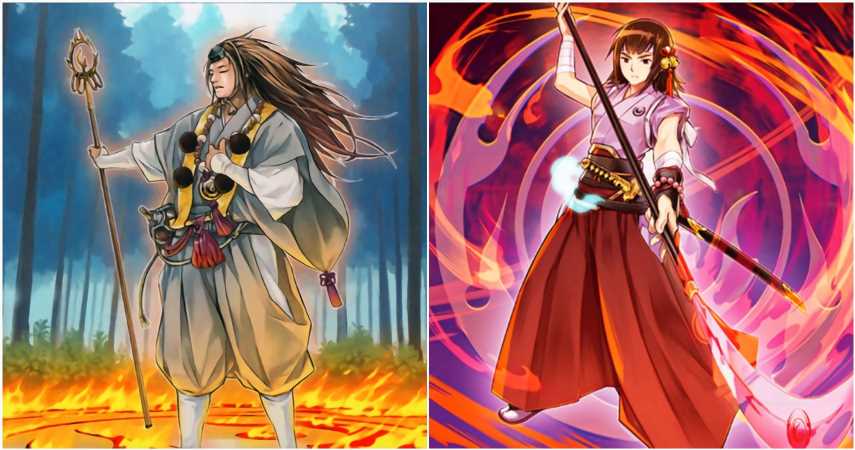 Yu-Gi-Oh! Master Duel is finally here, and with it practically every card released since the game's inception. There are so many kinds of decks and playstyles, it can be hard to find a deck that calls to you. For players who started with Duel Links, they may want something familiar, in which case Shiranui fits the bill.

Shiranui are an Archetype consisting of Zombie Monsters that like to banish themselves while bringing out powerful Synchro Monsters. They are a bit of a Control, more mid-range leaning deck, and perfect for duelists who have an interest in that. Some Shiranui cards are even so good they're played as general Zombie support cards. 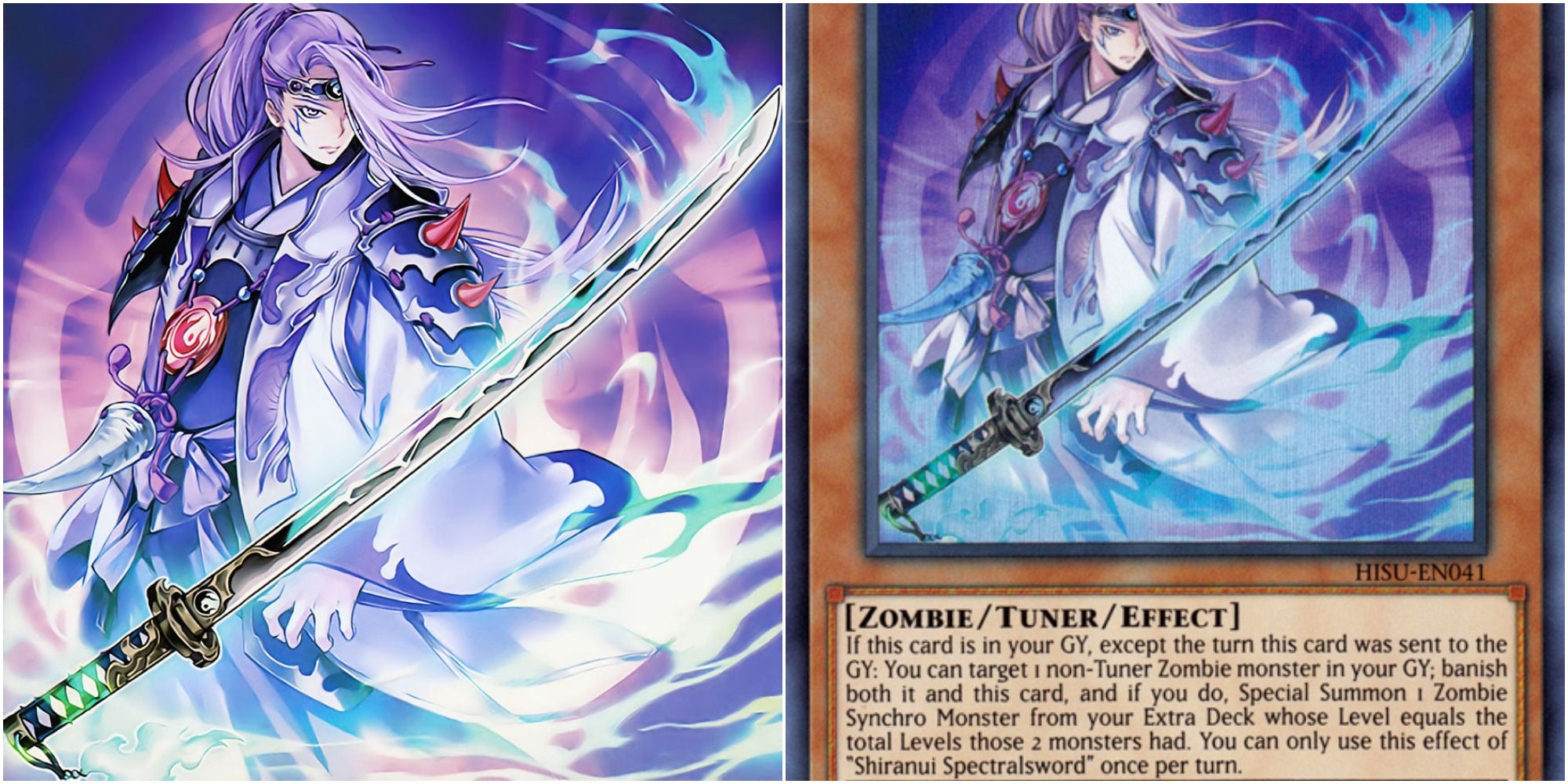 Shiranui Spectralsword is the main way you'll be going into your Synchro Monsters. It is a Level Two, and with the Levels Synchro Monsters tend to be for Shiarnui, it happens to be the best Level for a Tuner to be.

Shiranui Spectralsword is so good since it can essentially be used for two complete Synchro Summons. It has an effect that allows it to Synchro Summon a Monster with material from the Graveyard. This also triggers the effect of other Shiranui Monsters when they get banished, making for a big advantage push. 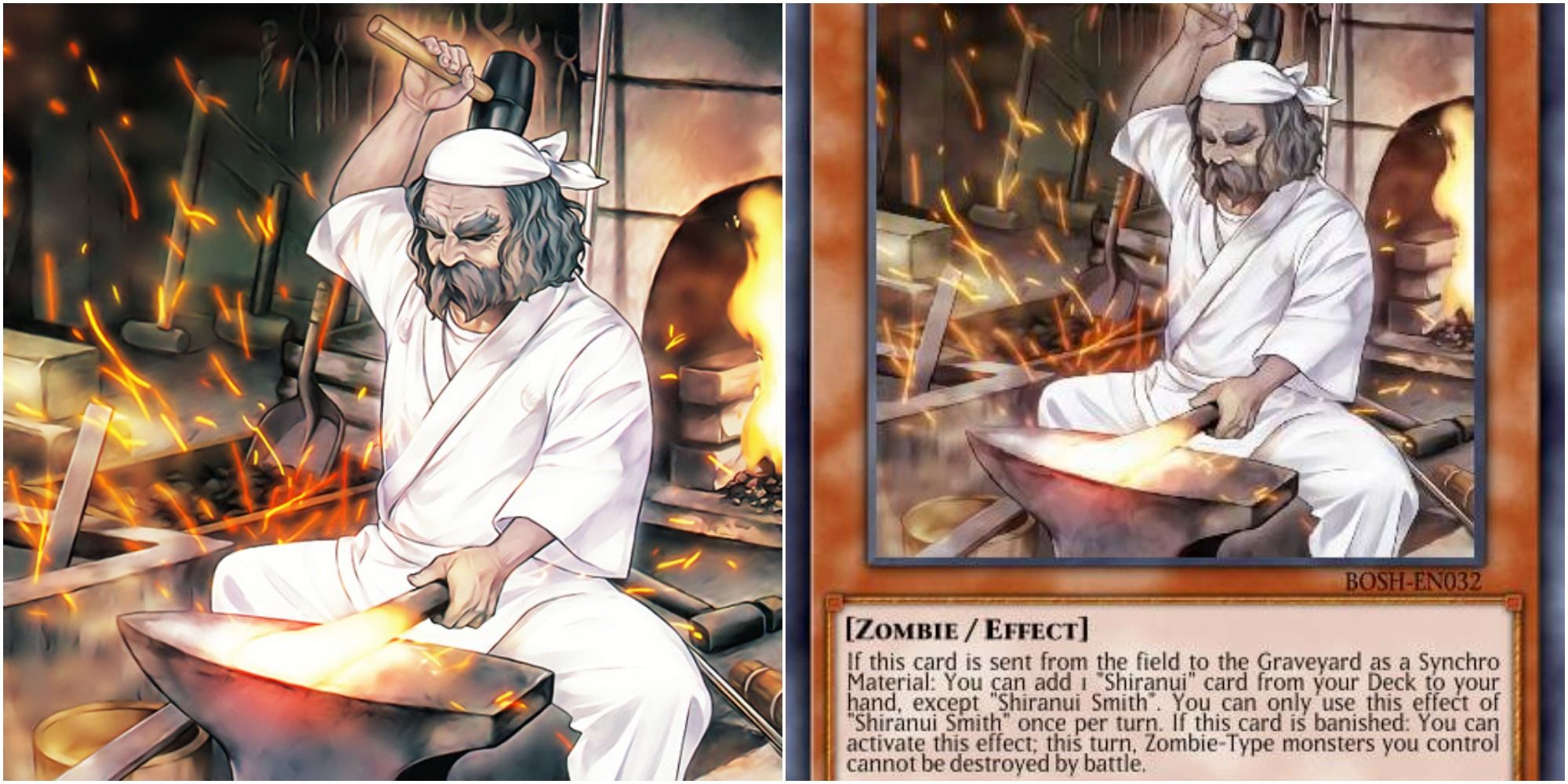 Shiranui Smith is the closest thing Shiranui decks have to a searcher. However, it can only be done after certain conditions are met. Shiranui Smith searches your deck for any Shiranui card, but only if it is used as Synchro Material for a Synchro Monster.

Since it's a Level Four, it's not too hard to meet this requirement. It is a bit slow, but having a slow searcher is better than having no searcher at all. If it's ever banished, Shiranui Smith can protect all Shiranui Monsters from being destroyed by battle. 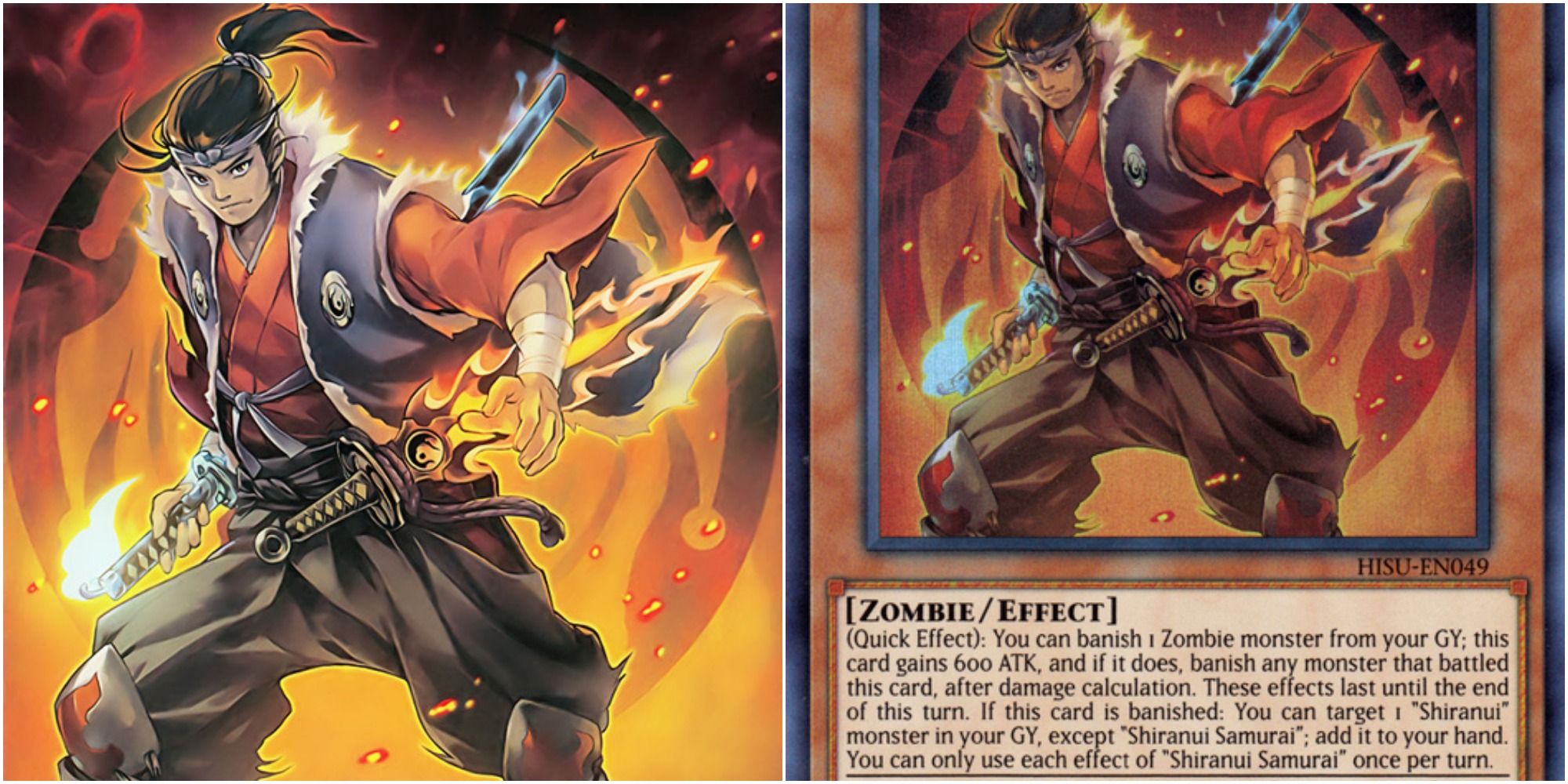 Shiranui Samurai is a card that helps get Shiranui's main gameplan going. On the field, as a Quick Effect, it can banish another Zombie Monster in order to get an Attack boost. The Attack boost is fairly irrelevant, but being able to banish Shiranui Monsters is what makes it good in the deck.

If Shiranui Samurai itself gets banished, it lets you recycle a Shiranui card from your Graveyard to your hand to bring it back out and use its useful on-field effects. All Shiranui Monsters don't mind being banished, so having easy access to banishing is fantastic. 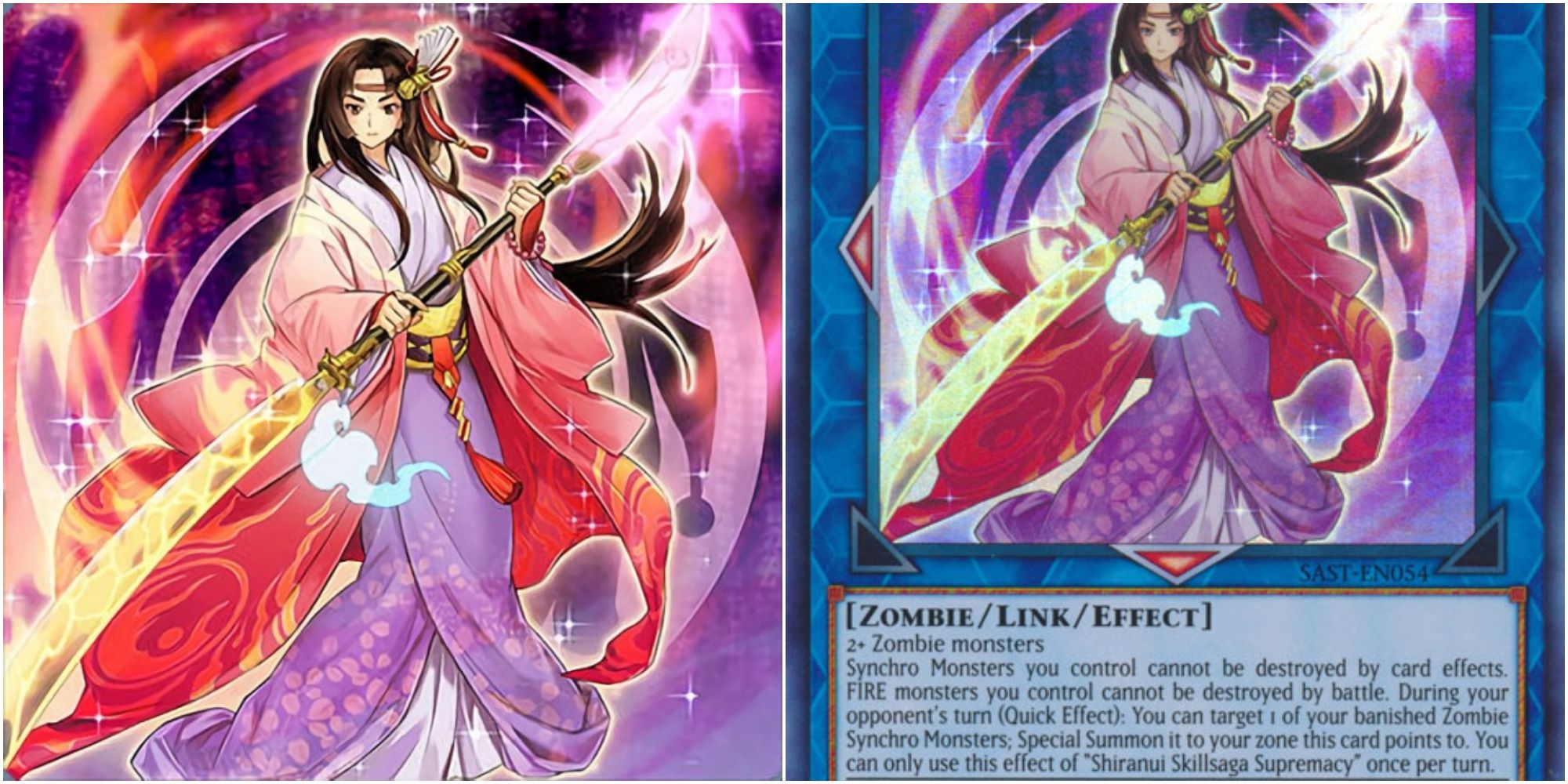 The sole Link Monster of the Shiranui Archetype, Shiranui Skillsaga Supremacy makes for a solid Link Three Monster, only needing two or more Zombie Monsters to make, allowing for semi-generic materials. It gives protection for all your Synchro Monsters, and prevents your Fire Monsters from battle destruction.

Shiranui Skillsaga Supremacy can even recycle your banished Synchro Monsters easily, sometimes that comes up quite a bit in Shiranui decks. It brings all aspects of Shiranui together, making for a formidable Link Monster. It recycles and protects, all while being very easy to summon. 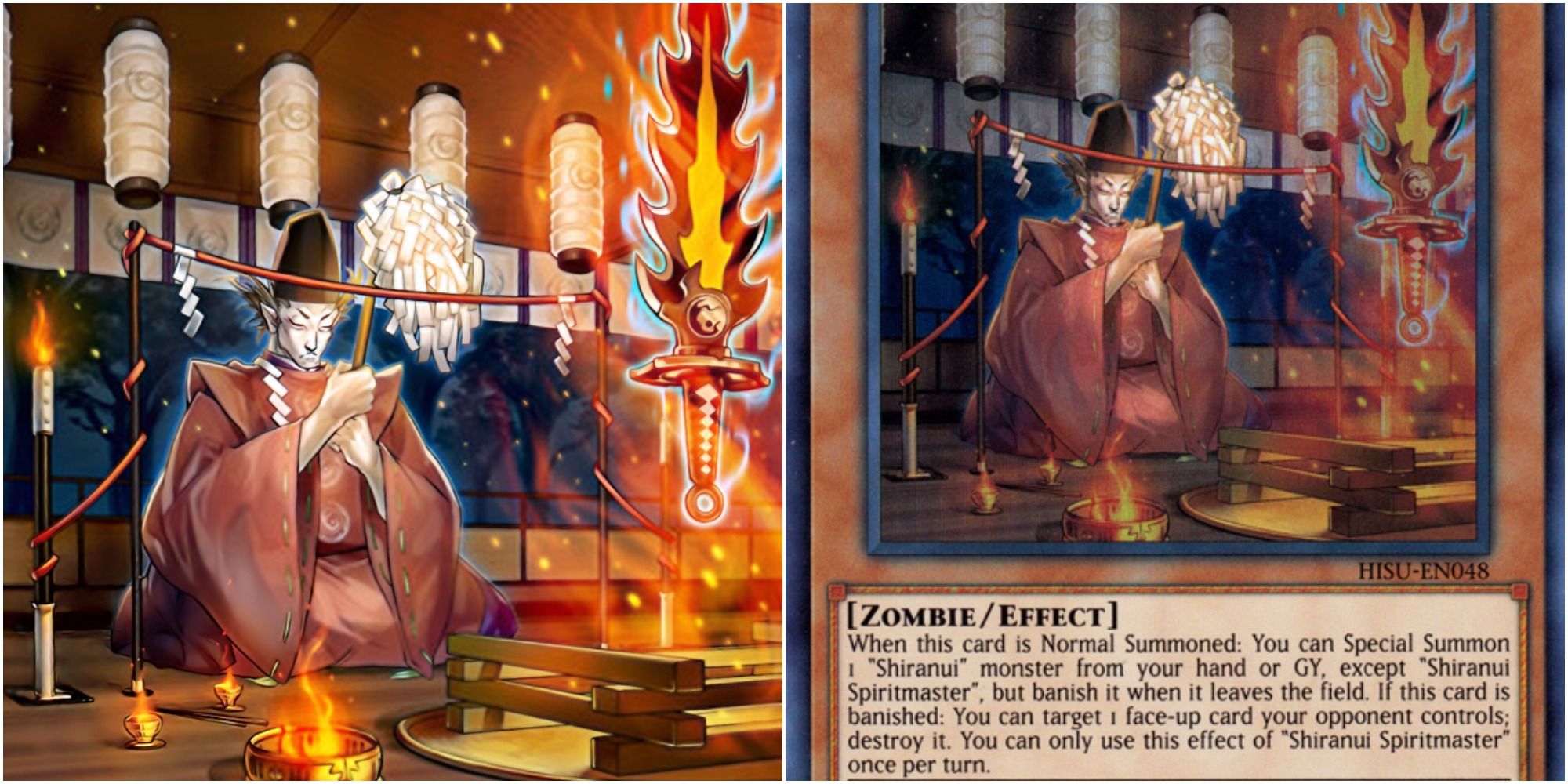 Shiranui Spiritmaster is a card that in most other Archetypes would have a downside. It can special summon a Shiranui Monster from the hand or Graveyard when it gets special summoned. However, the card it summons is banished when it leaves the field. While this restriction is usually a way to ensure you don't recycle effects, since Shiranui benefit from being banished, it just gives them more advantage.

It is a Level Four Monster as well, which pairs very well with the selection of Tuner Monsters Shiranui has access to. 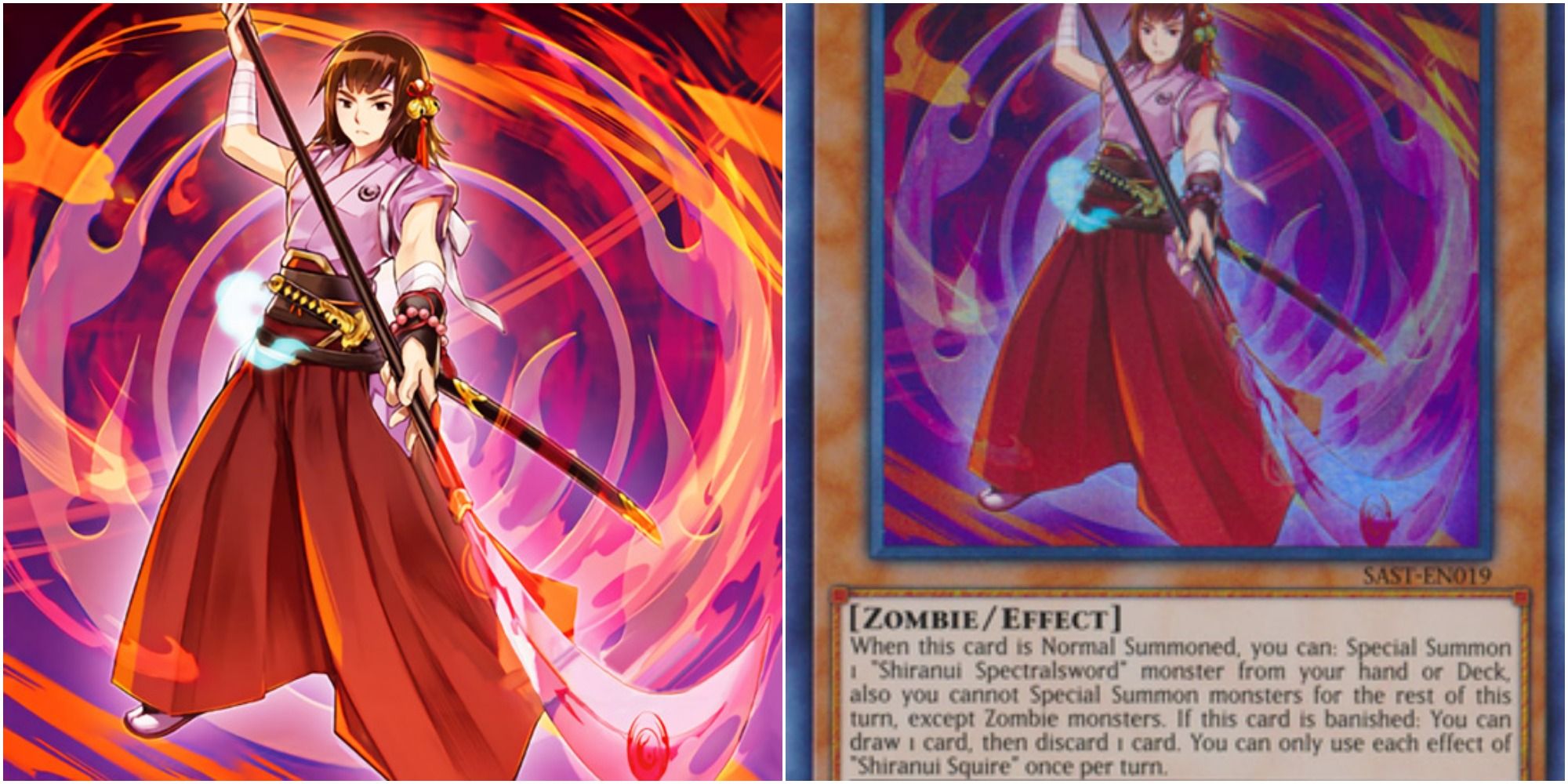 Shiranui Squire is the main Normal Summon Shiranui decks will want to be going for, and Duel Links fans will be very familiar with it. On its Normal Summon, it can bring out any Shiranui Spectralsword Monster from the deck to the field.

The Spectralswords are the deck's Tuner Monsters, making Shiranui essentially a one Monster Synchro Summon. If it gets banished, it even offers you a nice mulligan to refresh your hand or set up your Graveyard, both effects that Zombie decks love to have. It's a Level Four as well, making it a perfect target for Synchro plays. 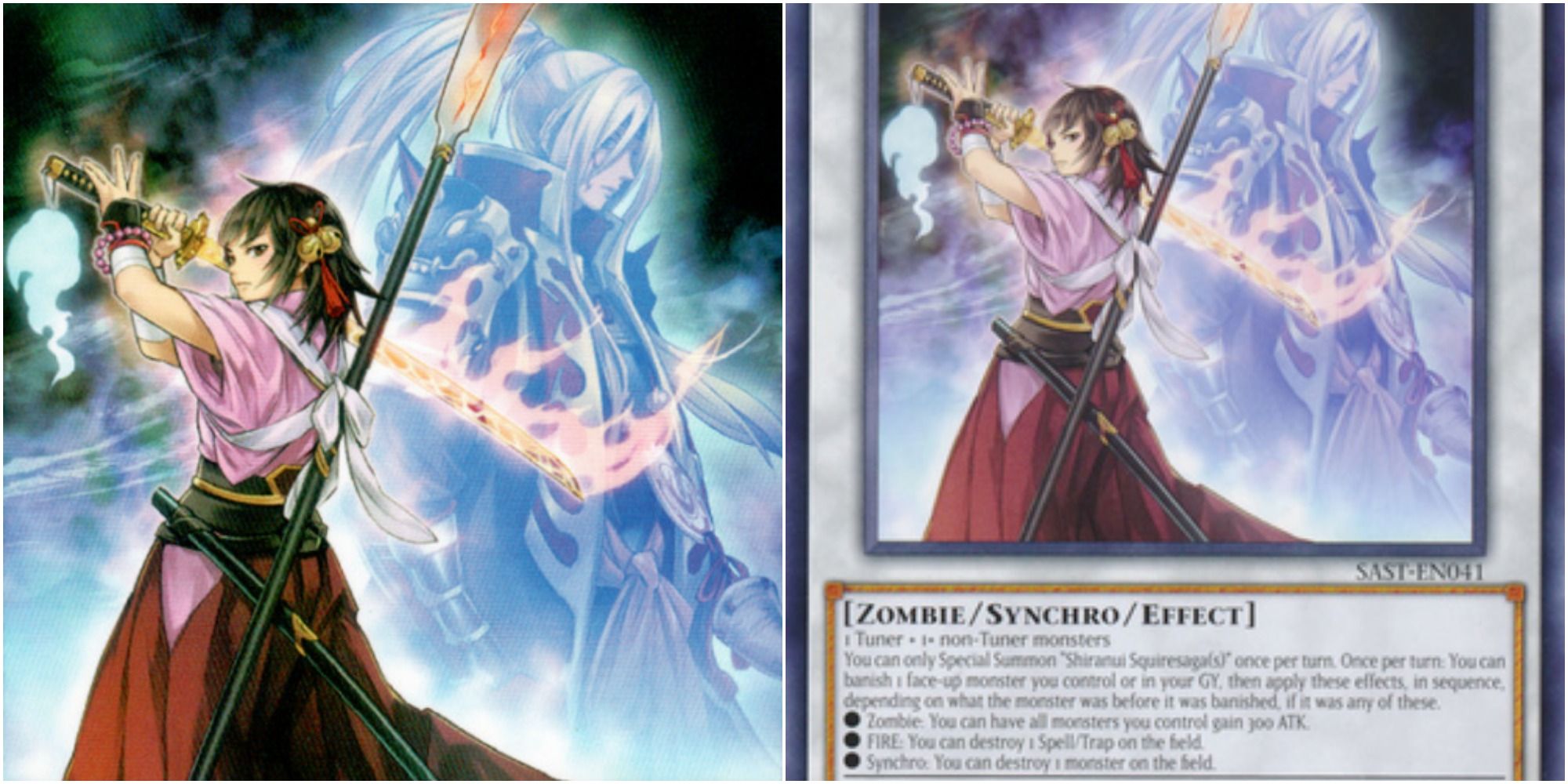 Shiranui Squiresaga can boost stats, destroy backrow, and destroy a Monster on the field without targeting, making for a solid early Synchro Monster to go into. It can however only be special summoned once per turn, but if there's more than one on the field, its effect isn't a hard once per turn, meaning all copies can use it. 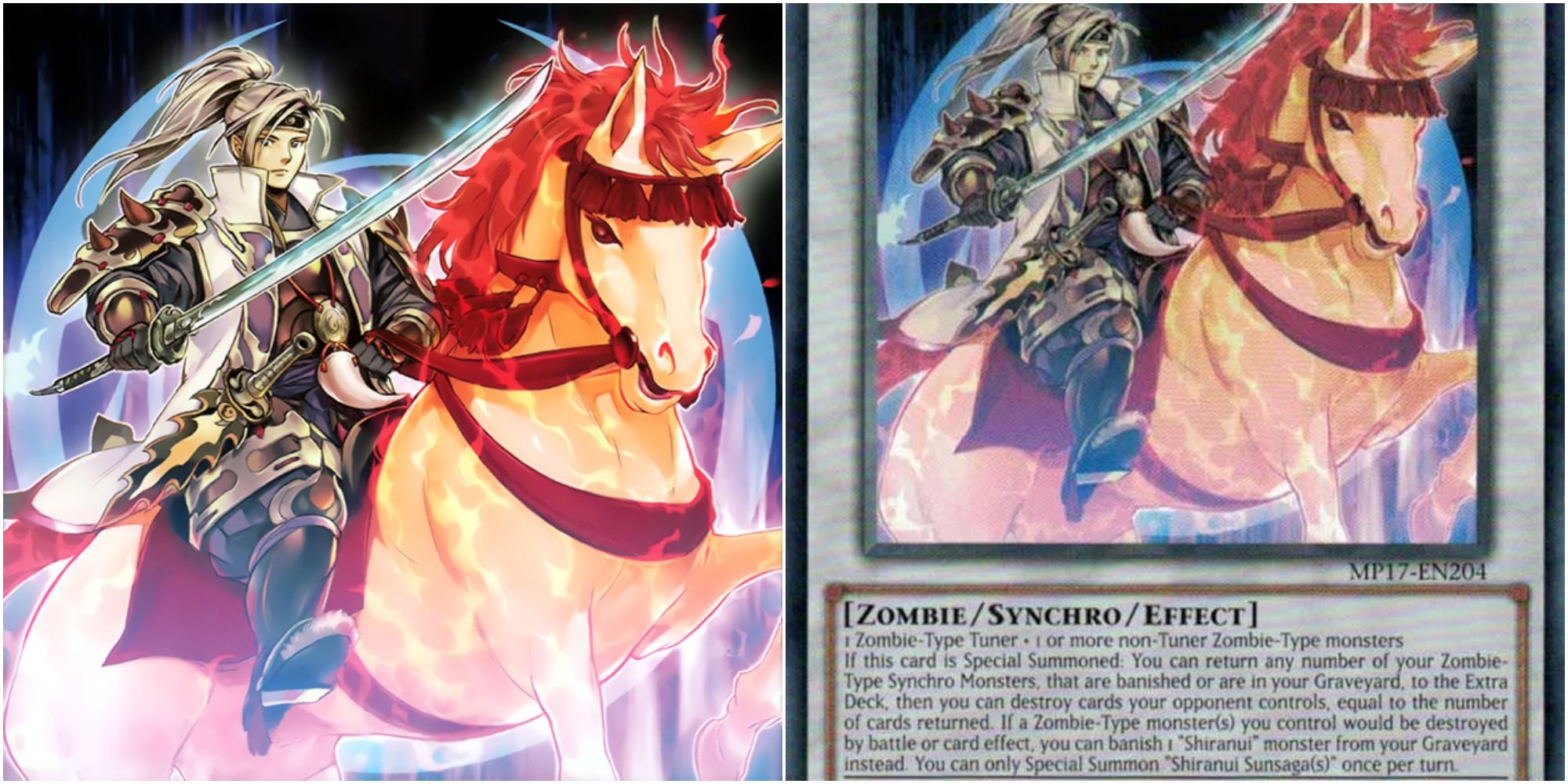 Shiranui Sunsaga is the main Boss Monster of the Shiranui Archetype and brings everything together under one card. It's a Level Ten Synchro Monster, though with how much recursion and Synchro climbing Shiranui have access to, this isn't even a problem.

When it's brought out, Shiranui Sunsage can recycle all your banished Synchro Monsters as well as the ones in the Graveyard back into the Extra Deck. Not only does it bring them back for repeated use, but Shiranui Sunsaga can also destroy cards on the opponent's field equal to the number of cards returned. This doesn't target either, getting around one of the more prominent forms of protection. 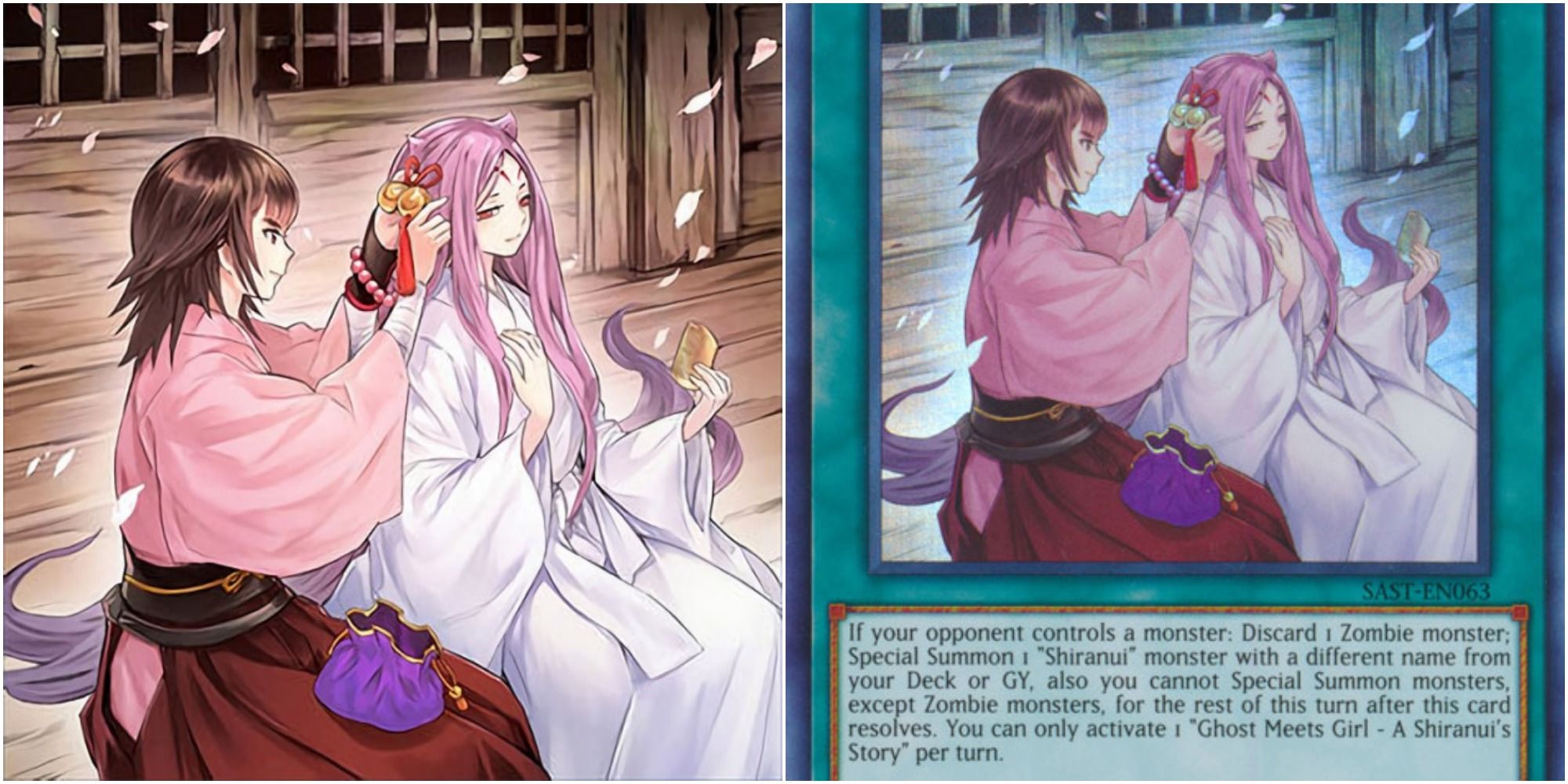 Special summoning a Monster from the deck is one of the best effects in the game. A card that can do that while also setting up the Graveyard is fantastic, especially in decks filled with Zombie Monsters. Since Shiranui are all Zombie Monsters, the restriction is irrelevant, and when combined with other cards can even be used generically in Zombie decks.

Ghost Meets Girl – A Shiranui's Story lets you get any Shiranui Monster you need at any given time, be it a Tuner, banish enabler, or a specific Level for Synchro plays. 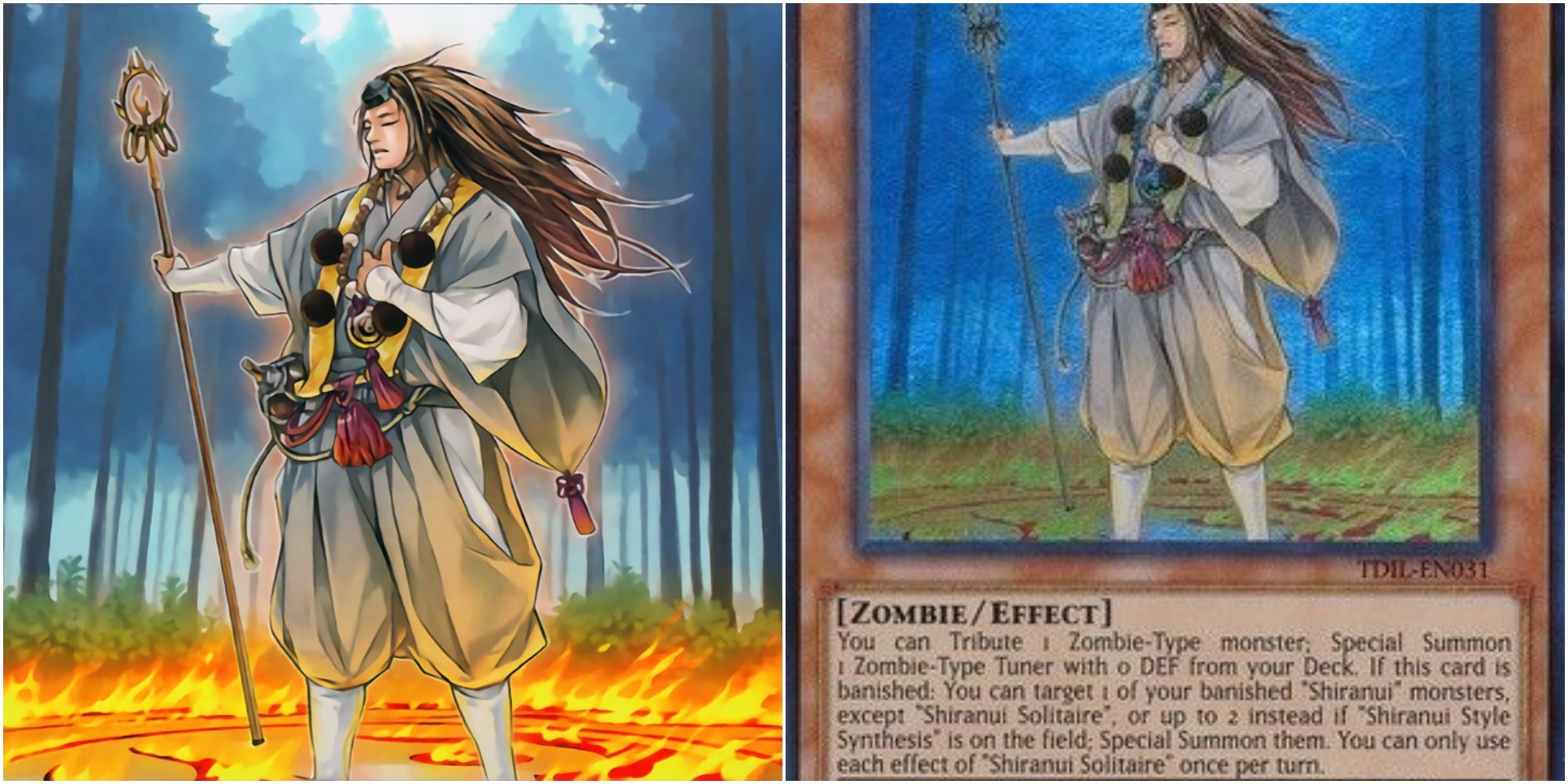