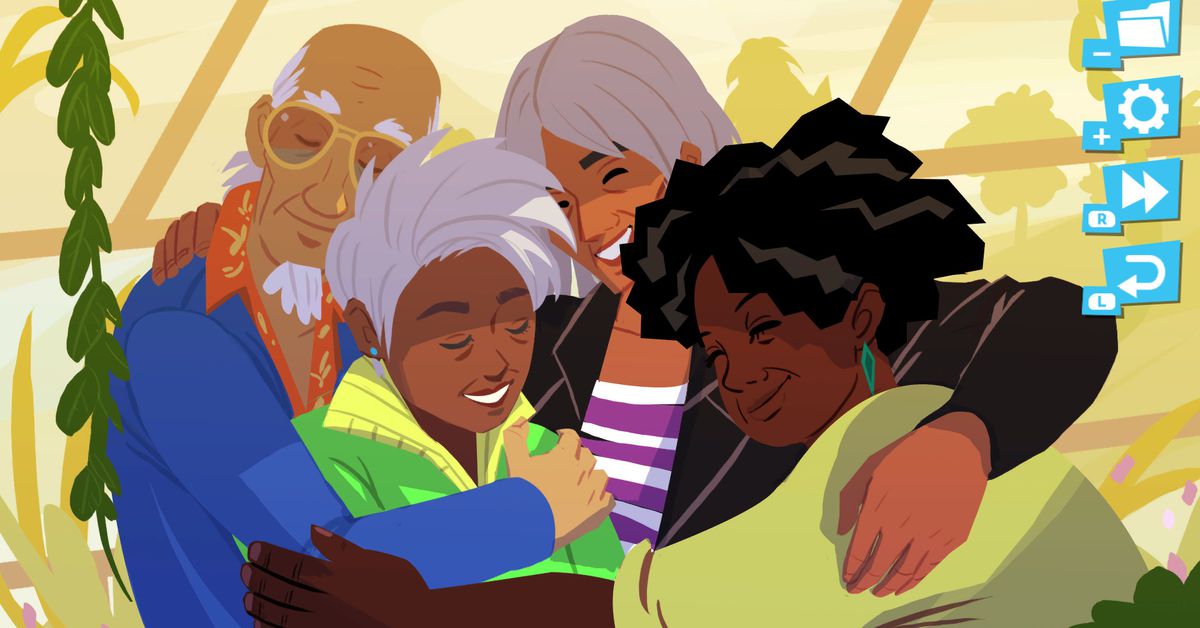 Here’s a truth that is rarely acknowledged: Old people fuck. Contrary to the popular belief that the older you get, the more you inflexible you become, the reality is that some seniors grow more adventurous and hungry with age. Later Daters, a visual novel about moving into a retirement home, is partially based on the love lives of real seniors interviewed by the game’s developer, Bloom Digital Media.

According to Miriam Verburg, executive producer at the independent studio, speaking to her older family members who are dating long after being divorced was revelatory. Her aunts, Verburg says, often had to clarify “right off the bat” if they wanted a relationship to be monogamous.

“[Monogamy is] not necessarily a thing that’s happening in seniors’ relationships,” the aunt said to Verburg. “A lot of us have been married for a long time. And we’re not married anymore, but we don’t want to go to that way.”

“Seniors are sort of presumed to be asexual,” the aunt continued, “when really they’re probably a lot more open-minded than we think.”

Later Daters lets players dictate not only the main character’s background leading up to the retirement home, but also affords fans a lot of flexibility in pursuing relationships. There’s the typical straightforward romance you might expect from a dating sim, but you can also have casual flings, or even become polyamorous with a handful of characters. Better yet, the entire way through, Later Daters makes the options clear enough that you are never surprised by your entanglements.

“There’s always an option to say no, because we always give the player agency,” Verburg says. The game also takes care in highlighting romances as character studies, rather than puzzles where the player simply has to say the right thing to score. Characters sometimes bristle when you try and tell them what you think they might want to hear.

The idea for the game, Verburg told Polygon, partially came from the realization that baby boomers are not only getting older, they’re increasingly playing games — but popular video games often ignore them outright. “There’s going to be a big gaming market [there],” Verburg says.

The unusual dating sim is also a natural progression of the studio’s larger oeuvre. Where Bloom Digital Media’s previous game LongStory explored young LGBT romance, Later Daters swings in the opposite direction. The game is concerned with aging, losing people, and what it means to be comfortable during retirement. Crucially, Later Daters takes place in Canada, where the health care system is more robust than in countries like the United States.

“Getting older is kind of a loaded topic about capitalism,” Verburg acknowledged.

While Later Daters initially started as a conversation about older players, now that it’s been out for a while, the studio has noted that its most visible fan base is actually “aspirational millennials” who see getting older as a relaxing escape. While the game has certainly been embraced by some seniors, playing something about adjusting to a retirement home isn’t exactly a fantasy for these fans. Younger players, meanwhile, might already be grappling with the complexities of having open or non-monogamous relationship systems, and the game lets them see what that might look like over time.

While the audience may not perfectly align with the game’s subject matter, Later Daters still reflects a phenomenon among older singles. One subject interviewed for the game had been married to a man for around 15 years, ultimately raising a small army of children. But in her golden years, she’s been dating women instead, some of whom are married but in open relationships.

The “idea of monogamy is so limited in terms of understanding how love evolves as you age,” Verburg says. “So we kind of thought it was a natural fit to put in a polycule.”

According to this interviewee, having a lesbian relationship was the first time that she felt emotionally and sexually fulfilled. And in Later Daters, players can definitely be a part of situations where characters are only starting to explore their sexuality after reaching seniority, including one storyline where a character decides to transition later in life. More sensitive situations, like HIV-positive characters with active sex lives, are handled thoughtfully as well. The game traverses between endearing, feel-good moments and poignant, sometimes sad storylines with a rare grace.

But just because it’s wholesome doesn’t mean the game can’t get racy, too. After all, the developers wanted to share the realities of real people’s lives, and people don’t just wither away when they age. Seniors told Verberg about picking up creative aids, like “erotic cookbooks” that provided “recipe” prompts to try out with partners. And more than one interviewee excitedly told Verberg about how much they loved surprising their dates with visits where they were buck naked, save for a large coat. Getting older, as it turned out, was just the start of an exciting new chapter full of possibilities for these seniors.

Later Daters is spread out over two chapters, and it’s available for Nintendo Switch via the eShop, and Mac and Windows PC via Steam and Itch.io. A recent update to the game introduced a fully-fledged Cribbage mode.