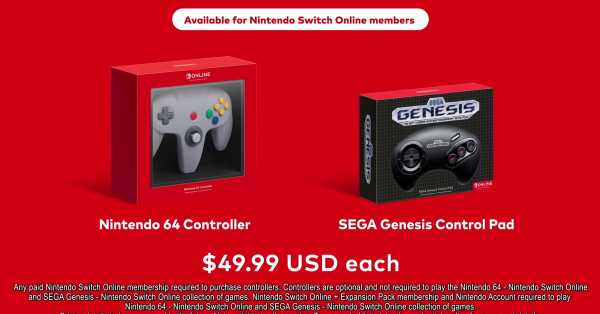 Nintendo will soon sell a Sega Genesis controller. The wireless controller will cost a whopping $49.99 and will be available for purchase to subscribers of Nintendo Switch Online. For the same price, Nintendo will also sell a wireless Nintendo 64 controller, but that’s not nearly as weird as an officially licensed Sega controller shipped in a big, red Nintendo box.

Both controllers will support the release of N64 and Genesis games on an upcoming expansion tier to Nintendo Switch Online. Many Sega Genesis games are already available on the Nintendo Switch, though their inclusion in Nintendo’s subscription service feels like a final nail in the coffin of the original console wars, which had died and rotted long, long ago.

In the 1990s, Sega and Nintendo were fierce rivals, each hoping to win the 16-bit era of video games. But in the new millennium, Sega has exited the hardware business. It’s now best known for Sonic the Hedgehog, the Yakuza franchise, Hatsune Miku, and the JRPGs published by subsidiary Atlus, particularly the Persona games.

The controllers do not have an official release date, though it will likely be sometime this fall. N64 and Sega Genesis games will arrive on Nintendo Switch Online in October.