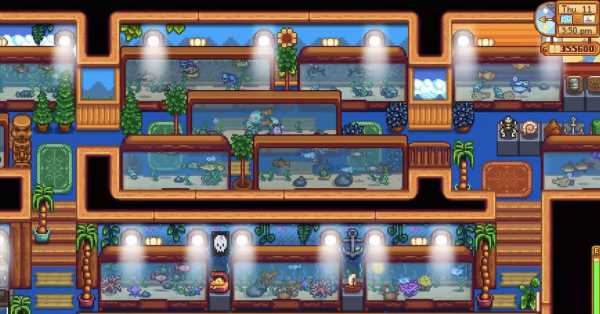 You can have a total of three cabins in Stardew Valley, and they’re designed for co-op play. Players will often use them to store items or machinery, because cabins have more interior space than sheds while taking up a similarly slim footprint on a farm. But what if, instead, you filled that cabin with something more inventive and decorative?

Redditor Papikipp did just that, creating an aquarium inside one of his Stardew Valley cabins — bringing a little slice of Animal Crossing: New Horizons’ museum into the other popular cozy farming game.

“I actually used a cabin for this design, my main home is designed as an actual home,” Papikipp told Polygon via Reddit chat. “I was actually inspired by animal crossing’s museum aquariums. I like the idea of being able to showcase all the different fish we can catch in game and what better way than an aquarium. I just love seeing the fishes swim around, it makes the game so much more alive so to speak. It also helped me a lot with getting the master angler achievement.”

Papikipp’s aquarium is an impressive feat, both in its creative design and because of the fishing skill it required. His cabin not only features every single one of Stardew Valley’s 83 fish — it features two of each so “they wouldn’t be lonely,” he explained on Reddit. It took Papikipp roughly a week to create the aquarium — from designing it to catching the various fish — and he did so without mods, on Nintendo Switch.

“Completing it fully along with the fishies took about a week give or take since I had to wait for different seasons for different fishies,” Papikipp said. “Legendary fishes are always a pain, especially with the fishing mini game. The octopus was also a challenge, I would even say that it’s harder to catch than the legendaries. The specialty fishes in the mines and the desert (stonefish, lava fish, ice pip, etc) were also a bit of a challenge since their movement patterns are very unpredictable.”

The layout is packed with details. The fish types are organized by region, with mountain region fish at the top left of the cabin (relative to viewer perspective), and deep ocean fish displayed in tanks at the bottom right of the cabin. Surrounding decorative items stick with this theme, from the wallpaper details — with snowy wallpaper on the upper left, and starry night (representing the deep sea) in the room on the bottom right — to the trees featured throughout. There are also display sections for various shells, and porthole windows give the area natural lighting.

Papikipp explained: “I designed the rooms to match the habitat of the fishes, it starts off as a mountain area at the top left corner then you make your way through the forest/riverland then through the desert then the ocean all the way to the bottom of the sea, adding more cohesiveness!”

In order to fit everything, Papikipp used a variety of tank sizes, including the largest tank size, which can can be acquired from Qi’s Walnut Room — introduced as part of the game’s substantial update in December 2020, which added the new location Ginger Island, along with other new late-game content.

“Positioning the aquariums took a bit of time since you can’t rotate them vertically,” Papikipp said. “I was also afraid I wasn’t going to be able to fit all the fish but in the end I had extra space for duplicates. I also knew I wanted to display ocean/fishing related items for my aquarium which helped fill all the other spaces.”

Papikipp converted the cabin’s kitchen space into a seafood restaurant, with cellar space turned into an extended dining area. This raised one particular question that Papikipp was quick to address: “The fishes in the aquariums are not for eating purposes,” he said, “the fish used in the restaurant are farmed in the fish ponds just outside of the aquarium!”