Catan, one of the most popular board games of the last few decades and the game credited with kicking off a tabletop boom, recently came to Nintendo Switch. I was excited to try it out, especially since I assumed it would mean my friends and I could play a casual game of Catan without the extensive setup. But when I booted up the game looking for a local multiplayer option, it was nowhere to be found.

There is an online multiplayer mode, so in theory we could play an online game together while physically in the same room. Of course that means that everyone playing needs their own Switch and a Nintendo Switch Online account, which is far from a given.

At first, I’ll admit, I was annoyed. What’s the point of a digital board game if it can’t be enjoyed with friends like, well, a board game? My family and I have spent many long car rides playing digital versions of popular games like Ticket to Ride and Pandemic. Why didn’t Asmodee Digital include what seems like an essential feature in arguably its biggest title?

A representative from Asmodee Digital assured Polygon that local multiplayer was initially planned for the Switch version of Catan, but that “both technical and game design constraints” prevented it from making it to the final version. In contrast to a game like Monopoly or Small World, where all the cards are (literally) on the table, hidden information in the form of resource and development is a core part of Catan’s gameplay. Being able to see what everyone is working with, Asmodee argues, would prevent essential Catan strategies, like pulling out a surprise win with development cards. 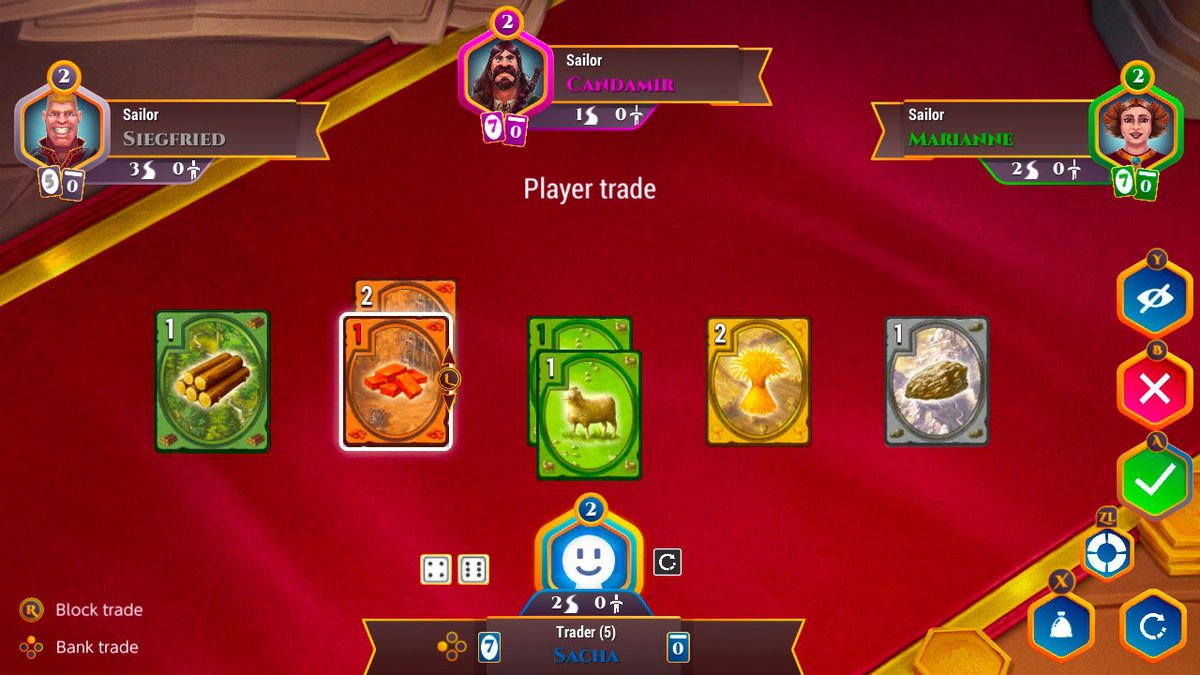 OK, fair enough, but what about pass and play? One of the Switch’s best features is its portability, after all. My favorite time to play digital board games is on long travel days when pulling out a game board is impractical. However, Asmodee claims that the constant player interaction between turns (i.e. trading) “deteriorate the user experience and would excessively lengthen game pacing.”

According to Arnd Beenen, Head of Digital at Catan GmbH, very few people were even using the pass and play feature when it was offered on mobile devices anyway. In a conversation with Beenen, Catan creator Klaus Teuber, and Teuber’s son Benjamin, who manages Catan licensing, the men agreed that a local multiplayer option is annoying and clunky, fundamentally throwing off the game’s balance.

“To be honest,” Beenen says, “pass and play always felt clumsy and complicated because during a turn of Catan you’re interacting a lot with your opponents, so it was … more frustrating than fun handing over the device multiple times. And therefore after a lot of discussion we decided to drop that feature in favor of a campaign and additional Seafarer expansions so you’ll have more fun as a single player.”

He added that, “For us, the digital versions of Catan are never a [replacement] for the board games. It’s always a supplement; another way to enjoy it.”

So there you have it. If you’re looking to play Catan with a group, your best bet is to just bust out the physical board game. For Catan fiends who just can’t get enough, the digital version is a fine substitute.