The Alienware m15 midrange gaming laptop we’re reviewing here is in a bit of a weird spot at the moment, caught mid-refresh. In October of 2018 the Alienware m15 debuted—at long last, a slimmed-down version of its longtime Alienware 15 laptop. But only a few months later that version is seemingly on its way out, with the announcement at Computex that the product line will soon be updated with the “Legend” design language first seen on the flagship Alienware Area-51m.

The first-gen m15’s not dead yet though. Just before Computex, Alienware sent us an updated version of the original m15, bumping up to Nvidia GeForce RTX 2070 Max-Q graphics and a stunning OLED display. The company confirmed that this model will be around through the holidays, overlapping with the redesigned versions. And if you hadn’t guessed already, it doesn’t come cheap.

And sure, you can get a more expensive Alienware m15. The top-of-the-line model is an OLED-equipped variant with an Intel Core i9-8950HK, RTX 2080 Max-Q and 32GB of RAM which lists for $4,480 through Alienware’s site. That’s mortgage-your-house money. 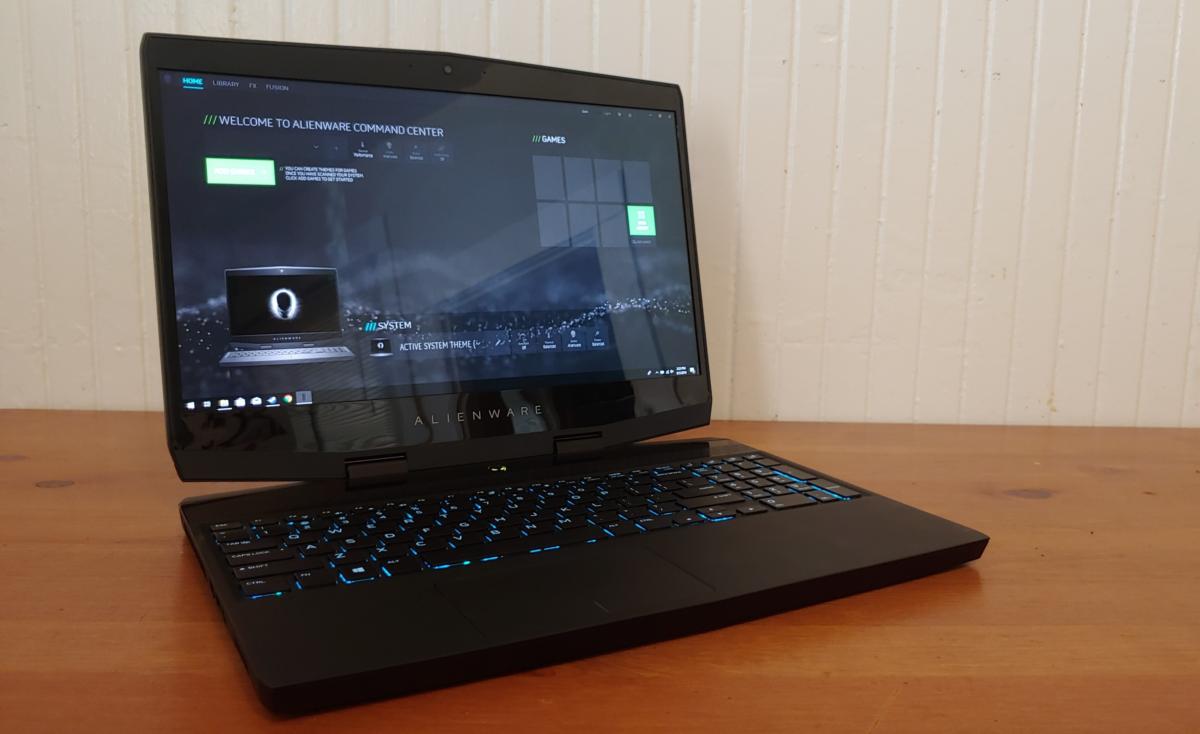 Up against that kind of exorbitance, $2,430 seems almost affordable. That said, it’s worth noting we just reviewed another laptop with similar hardware last month—the Lenovo Legion Y740. It features the same Core i7-8750H and RTX 2070 Max-Q, but for only $1,920 list. Plus it was on sale when we reviewed it, dipping as low as $1,540.

The Legion Y740’s 144Hz G-Sync display didn’t look nearly as nice as Alienware’s OLED option. I called it “nothing special,” to be specific. But for almost $1,000 less? Well, it might be better to take the mediocre built-in screen and buy yourself a nice, large monitor on the side. Or a fancy mouse and keyboard. Your call, I guess.

There are also plenty of options if you want a cheaper m15. The low-end model starts at $1,330 and features a GTX 1660 Ti—essentially an updated GTX 1060—plus a Core i5-8300H, a piddly 8GB of RAM, and a single 1TB hybrid drive. You can mix and match practically every part between that and the $4,000 monstrosity listed above to configure your perfect machine.

The Alienware m15 isn’t that much larger than the Razer Blade or other small form-factor gaming laptops, but it feels larger. I’m going to guess it’s the blunt angles, a proclivity for flat planes and sharp angles on the m15 where the Blade chooses curves. It feels aggressive. 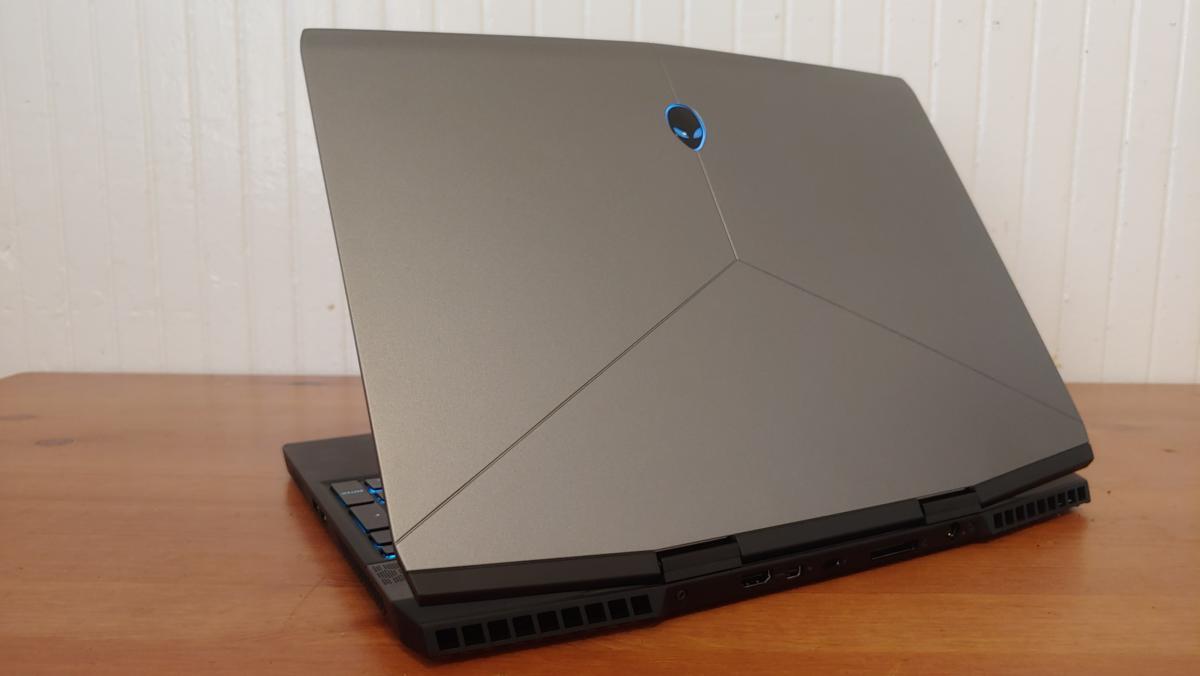 As someone who reviewed a few of those old Alienware laptops, I find this m15 fascinating. It’s so small! And yet it’s so recognizably Alienware, with its iconic, vaguely pentagonal silver lid, and three etched lines converging beneath the alien-head logo. This has been a key part of Alienware’s look since 2013, a through line that lent its laptops (and desktops) a vaguely science-fiction appeal. It’s weird to think the m15 will be its final hurrah.

Anyway, the m15 trots out the silver shell one last time, tweaking it where necessary to match the thinner chassis. For the most part that means fewer LEDs. There’s still RGB lighting on the alien logo, but the LED strips found on the side of both the Alienware 15’s monitor and base have been removed for the more portable m15 model. It’s a sturdy lid, with a gentle slope on the front to facilitate opening. 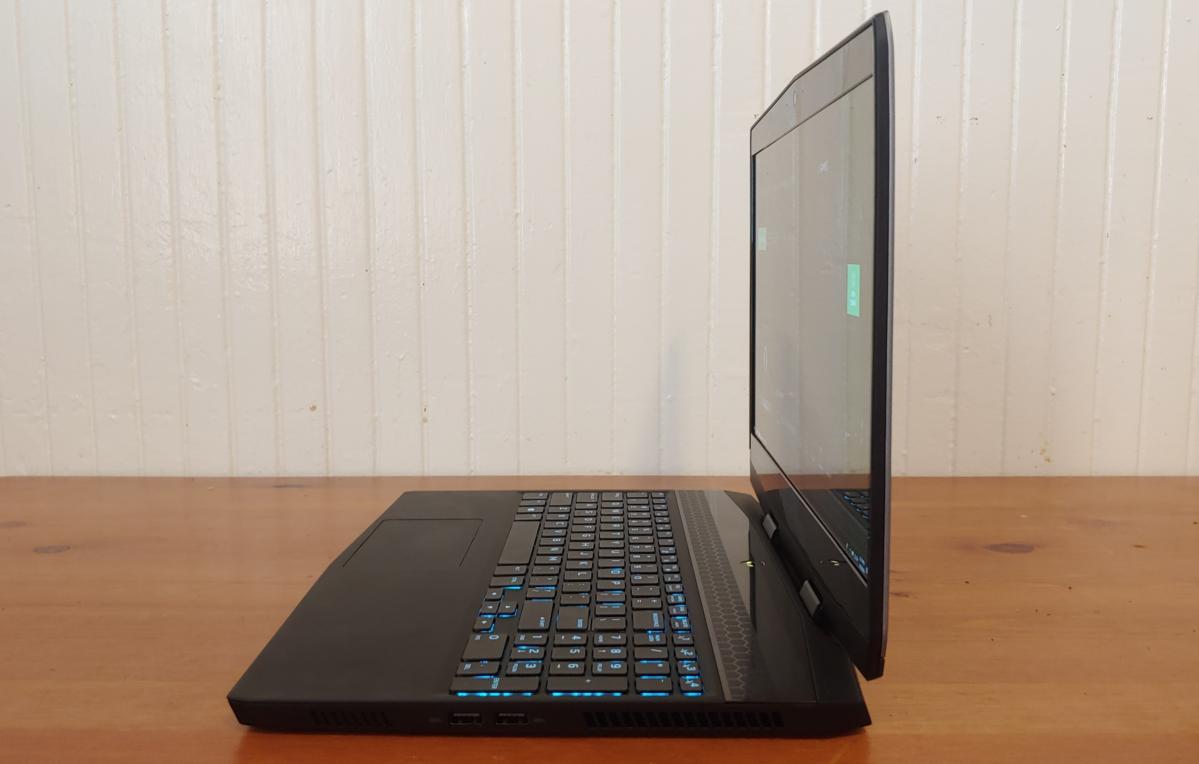 Crack it open and—oh wow, that OLED screen. That’s honestly how it went, for me. It was immediate, a rush of color and those deep, rich blacks that make an OLED screen pop. Usually I need to A/B test a bunch of laptop displays to see where one excels, another fails. But Alienware’s OLED screen is so obviously head-and-shoulders above the norm, you can’t help but fall in love with it the moment you turn it on.

There’s a reason you don’t see it more. First and foremost, it’s expensive. Alienware makes it a $350 add-on. That’s a lot to spend, just to move from an IPS display that’s good enough for most people’s purposes to OLED.

There’s also that pesky burn-in problem. Nobody wants the Windows taskbar permanently seared into the bottom of their laptop monitor.

Battery life fluctuates more, too. The reason OLED screens have such great shadows is because there’s no backlight. Wherever you see black, the display is effectively “off.” As a fan of Windows 10’s dark mode, that’s great news—but if you love bright-white light, there’s a chance OLED will be less power-efficient than a standard LCD.

Caveats aside, it looks incredible. I hope we see OLED in more laptops this year—though I’ll be curious whether burn-in reports start cropping up as well. 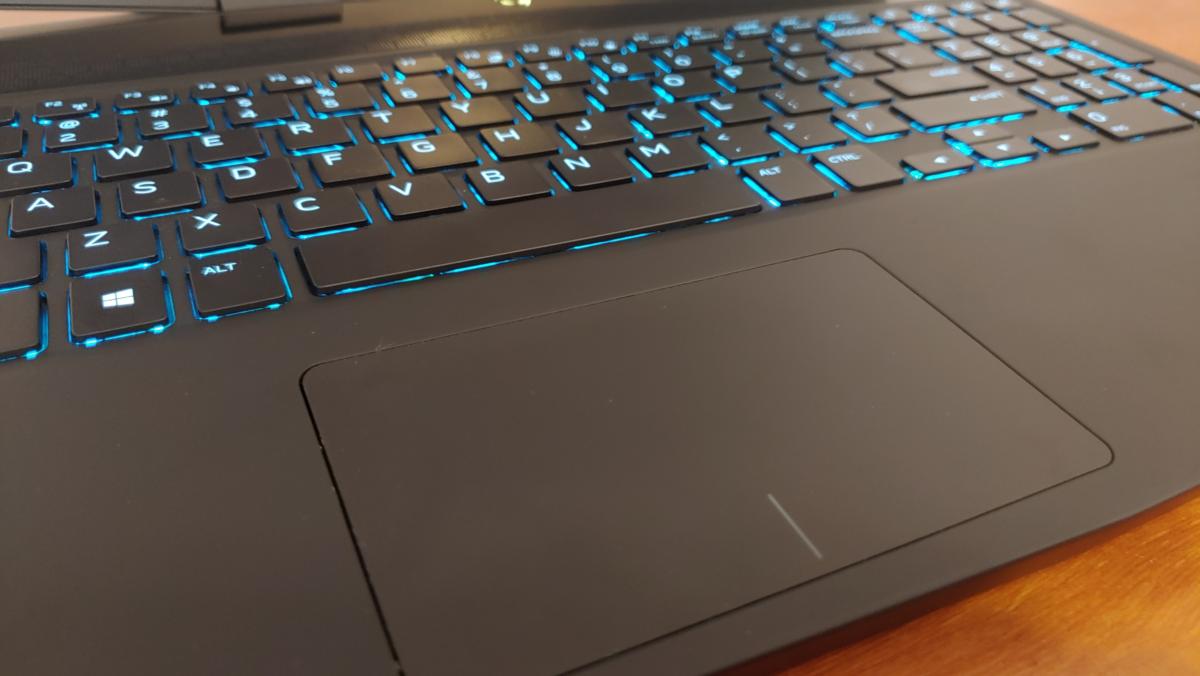 Moving on, Alienware’s keyboard is surprisingly good. Keystrokes are a bit shallow, but have a pleasant clickiness to them. The numeric keypad seems superfluous, crammed on the right side with smaller-than-average keys. I like numpads, but think the m15 would’ve been better served by a tenkeyless layout with more room to breathe.

The trackpad is the real letdown. For one, it’s another area where Alienware’s stripped out RGB LEDs. The old Alienware 15/17 had a backlit trackpad, which was mostly pointless but kind-of cool in Alienware’s usual flashy way.

That’s not the source of my grief, though. No, I’m lamenting the fact that Alienware went with a press-to-click trackpad instead of implementing discrete mouse buttons. It’s unconscionable. The Alienware 15/17 had dedicated mouse buttons, and I don’t know why the m15 changed it up. Sure, most people will use a mouse when they have the chance, but Alienware finally made a halfway-portable gaming laptop. I want to use it everywhere, and the lack of mouse buttons really puts a damper on that plan. It’s not a deal-breaker, but I always prefer a gaming laptop with actual buttons. It’s just more reliable. 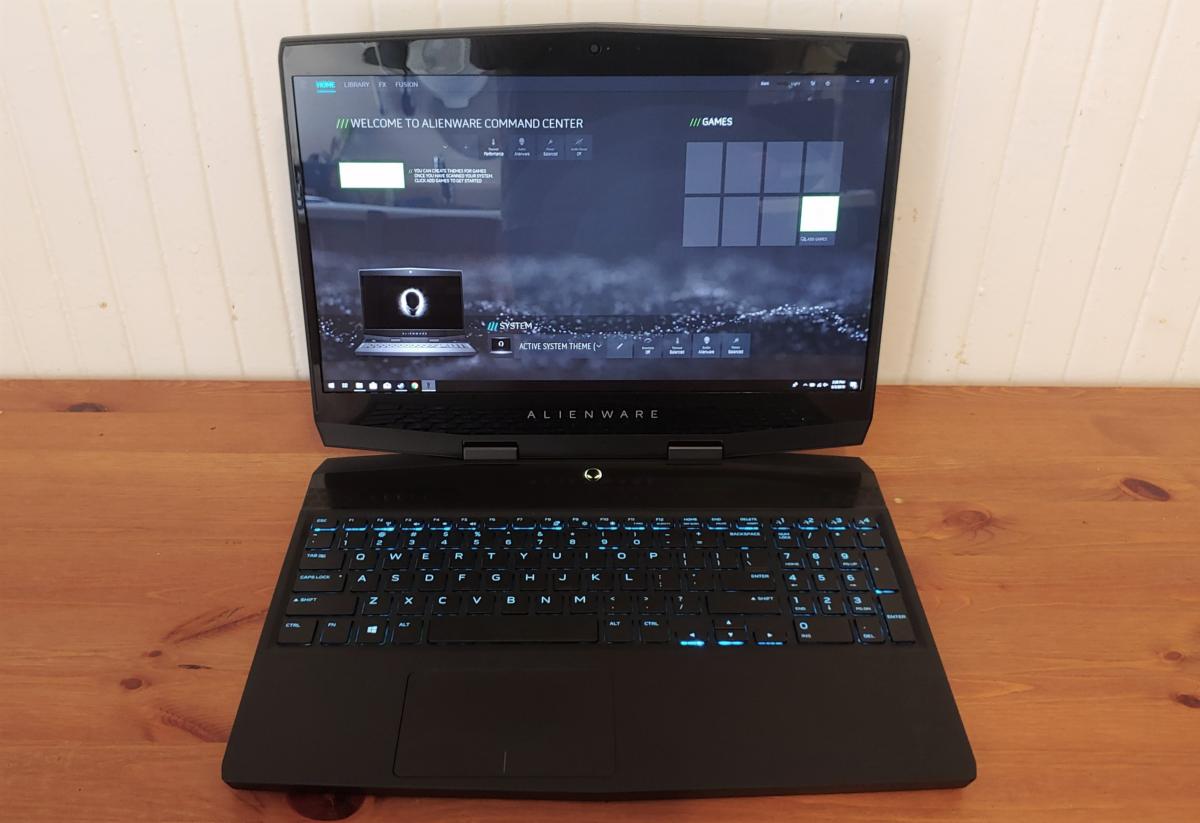 I’m also annoyed (albeit unsurprised) by the rear-facing ports on the m15. To be fair, Alienware is more generous with its side-facing ports than most. There are two USB-A ports on the right side, plus another on the left, and jacks for headphones and ethernet. The power port is on the rear though, which I find problematic unless I’m at a desk. It’s joined by the HDMI and DisplayPort outs, Alienware’s proprietary Graphics Amplifier dock port, and the sole Thunderbolt 3 (USB-C) input.

Finally, the audio is loud but weak. The m15’s primary speakers fire outward from the left and right sides of the laptop, which leaves them prone to being muffled by an actual lap. On a desk the situation’s slightly better, but even by laptop standards the m15 lacks bass presence. My verdict? They’re a compromise, especially given how loud the m15’s fans get under load.

For years Alienware held off making thin and portable laptops because it didn’t want to compromise performance. Thus going into the Alienware m15 review, I was worried we might encounter trouble. We can rest easy: Alienware’s done well with the hardware it’s got.

Let’s dig into the benchmarks, starting with our HandBrake test. This is our primary CPU test, wherein we encode a 30GB MKV file using the “Android Tablet” preset. It’s a strenuous task, not just for the CPU but the entire machine, with all the heat that’s generated over the 20 to 30 minutes it takes.

The Alienware m15 struggles a bit, finishing in 33 minutes or thereabouts. That’s slightly slower than most Core i7-8750H machines we’ve tested by a minute or two. Nothing too serious, but it does indicate potential difficulty dispersing heat from the CPU. 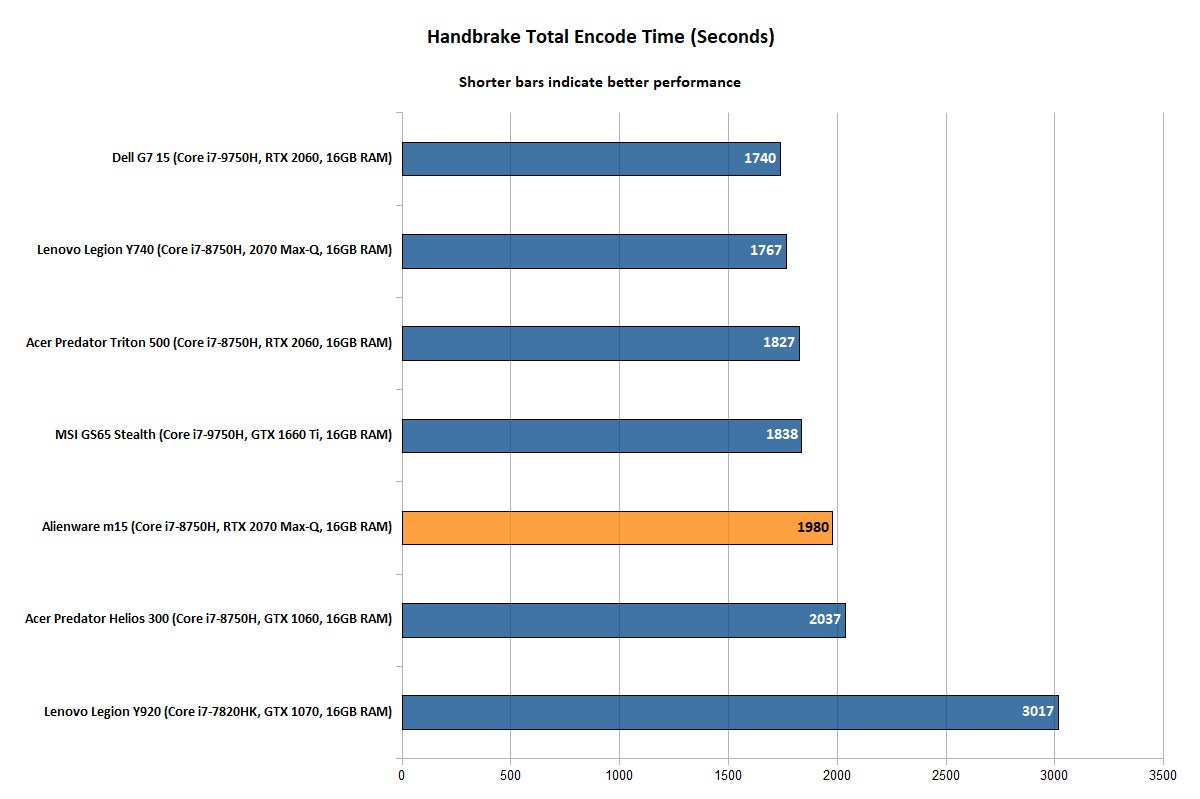 The same pattern arises in Cinebench, another CPU-focused benchmark. Again, we see the m15 settle near the bottom—though Acer’s Predator Helios 300 is right down there with it, suggesting this isn’t an aberrant score for the Core i7-8750H even if it is on the lower end. 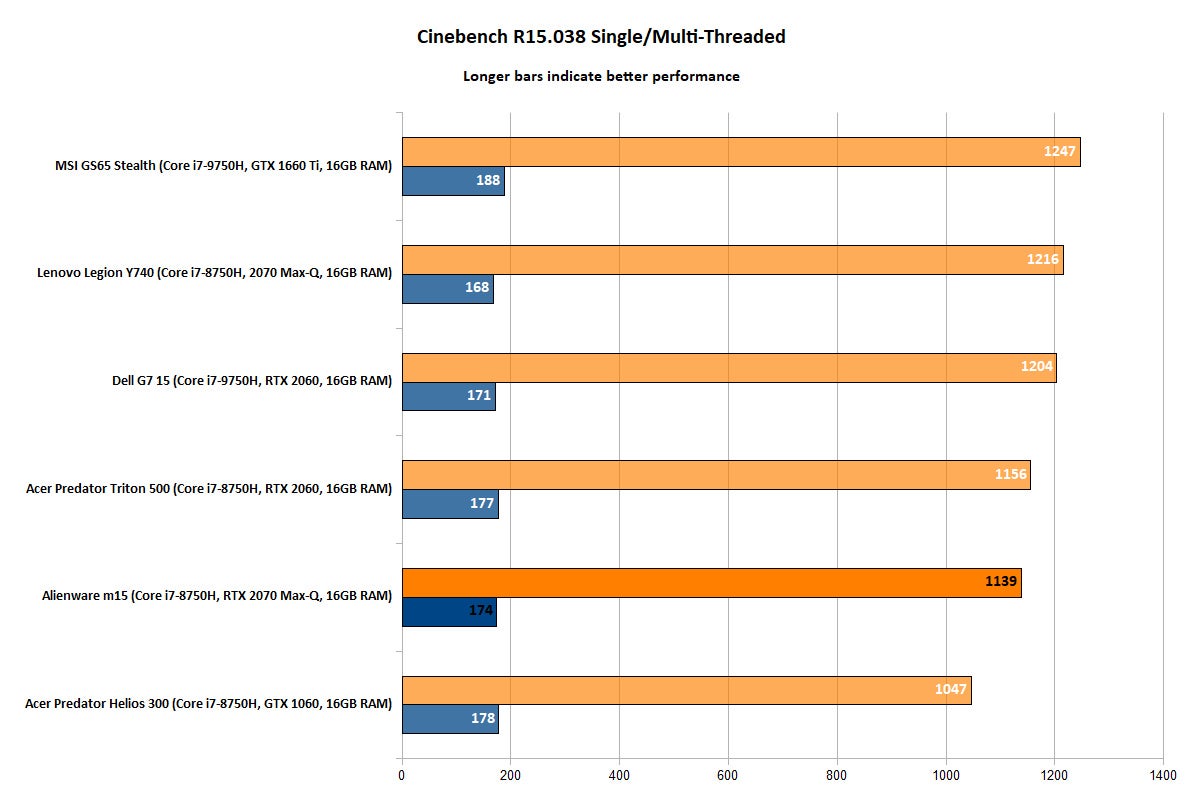 Regardless, the problem seems confined to the CPU. When we run the Alienware m15 through 3DMark’s FireStrike Extreme benchmark, a synthetic GPU test, it has no such issue. In fact, there’s good news: The Alienware m15’s implementation of the RTX 2070 Max-Q is significantly better than the Lenovo Legion Y740’s we looked at last month. Take a look at the chart: 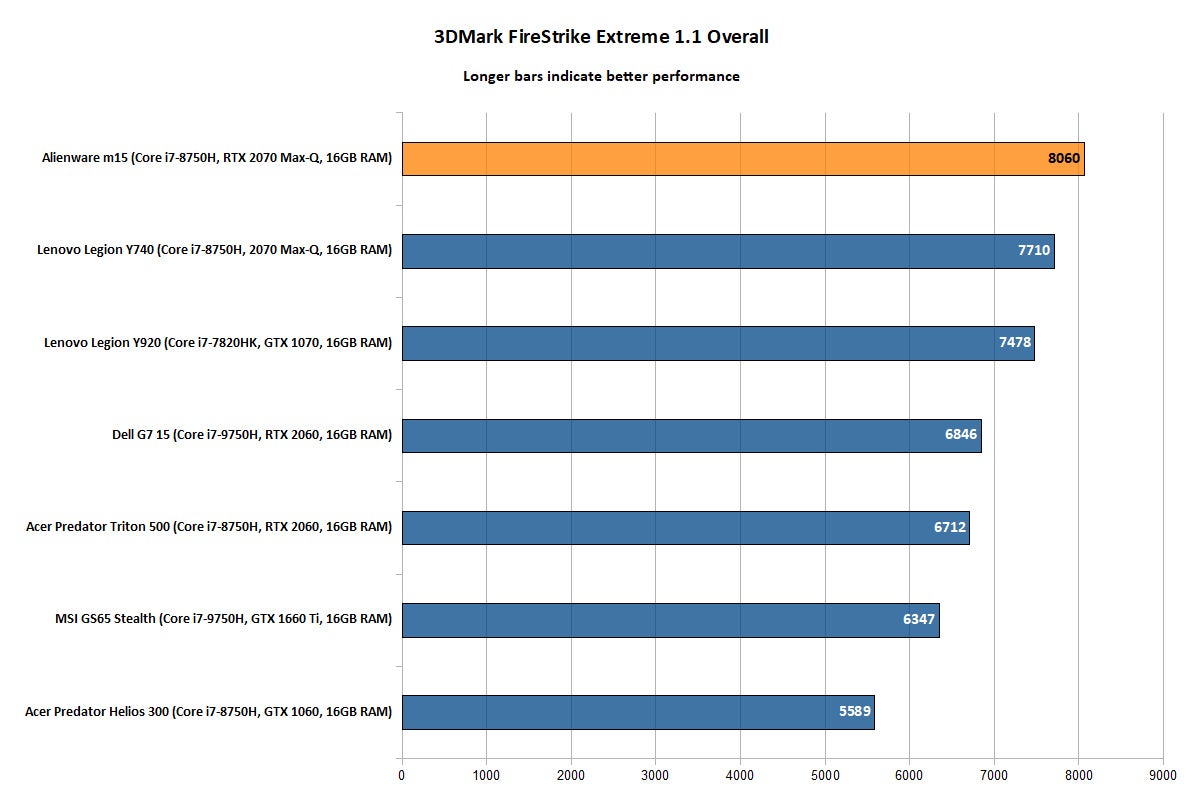 The bad news is it’s still not that much better than a full-size GTX 1070 on today’s non-ray-traced games, which makes it hard to justify the 2070 Max-Q’s (generally) higher price. There’s a slight bump—not to mention the 2070 Max-Q handily outpaces the RTX 2060. And if you’re looking for future-proofing against the ray-traced games of the future? The m15’s got it.

Real-world gaming performance is similar. Again, the 2070 Max-Q is about on a par with a GTX 1070. If you can find old 1070 stock floating around, that’s probably the way to go. In both Rise of the Tomb Raider and Shadow of Mordor though, the Alienware m15 puts up respectable scores that handily trounce 2060-equipped laptops. 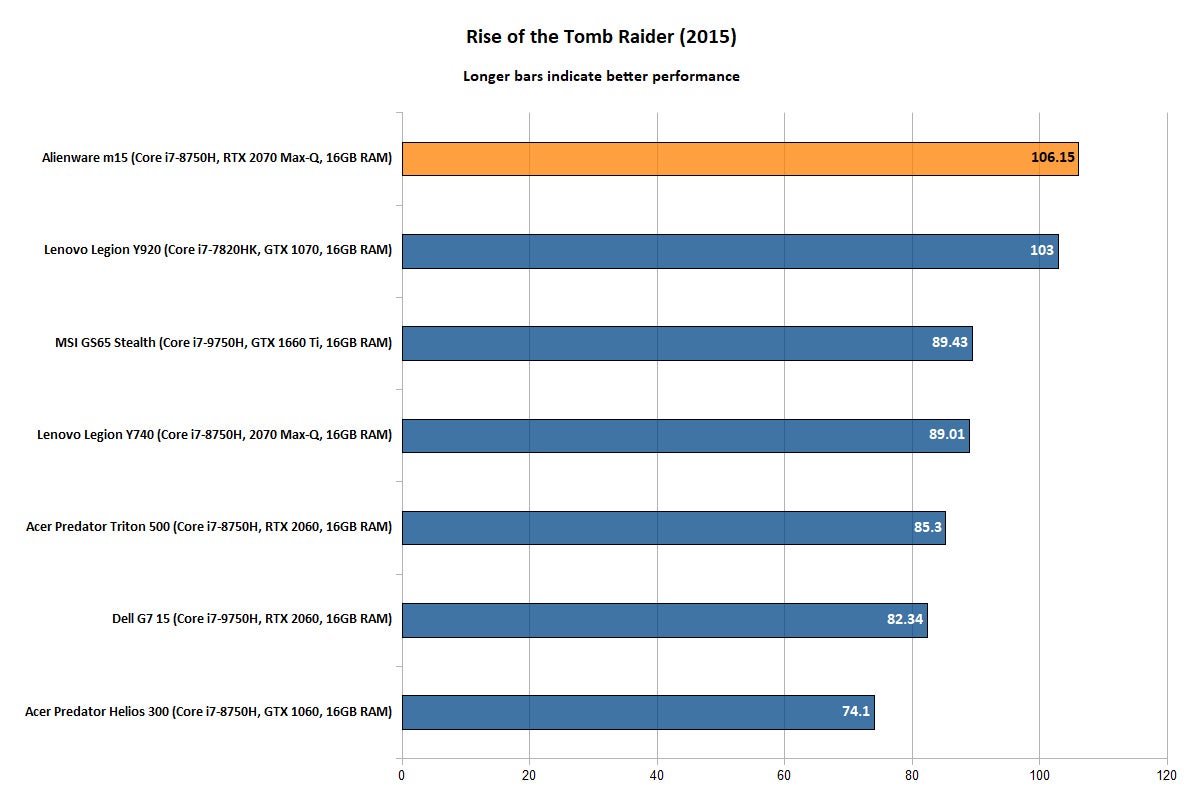 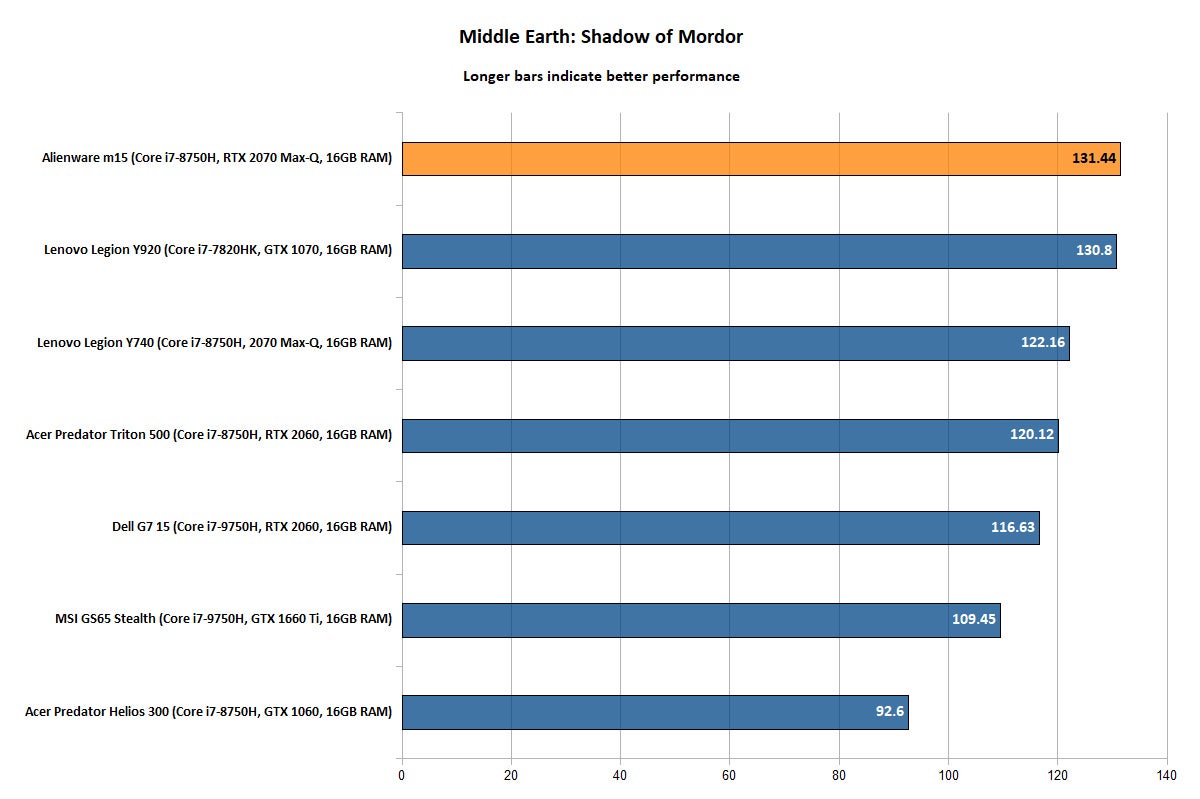 Have I mentioned games look damn good on this OLED screen?

Speaking of which, I mentioned earlier that OLED is more power-conscious than LCD screens in some ways and less in others. Luckily, Alienware’s packed a massive 90Whr battery into this tiny laptop—no, I don’t know how—and as a result the m15 actually lasts a decently long time. Our rundown test involves looping a 4K video at 250 nits, with the audio set to 50% and headphones plugged in. The m15’s 3-hour, 13-minute lifespan won’t exactly keep you going all day, but for a gaming laptop? One with this hardware? I’m actually impressed. I was expecting closer to the Alienware Area-51m’s result when we reviewed it earlier this year. It has a similar 90Whr battery and only lasted 2 hours and 14 minutes. 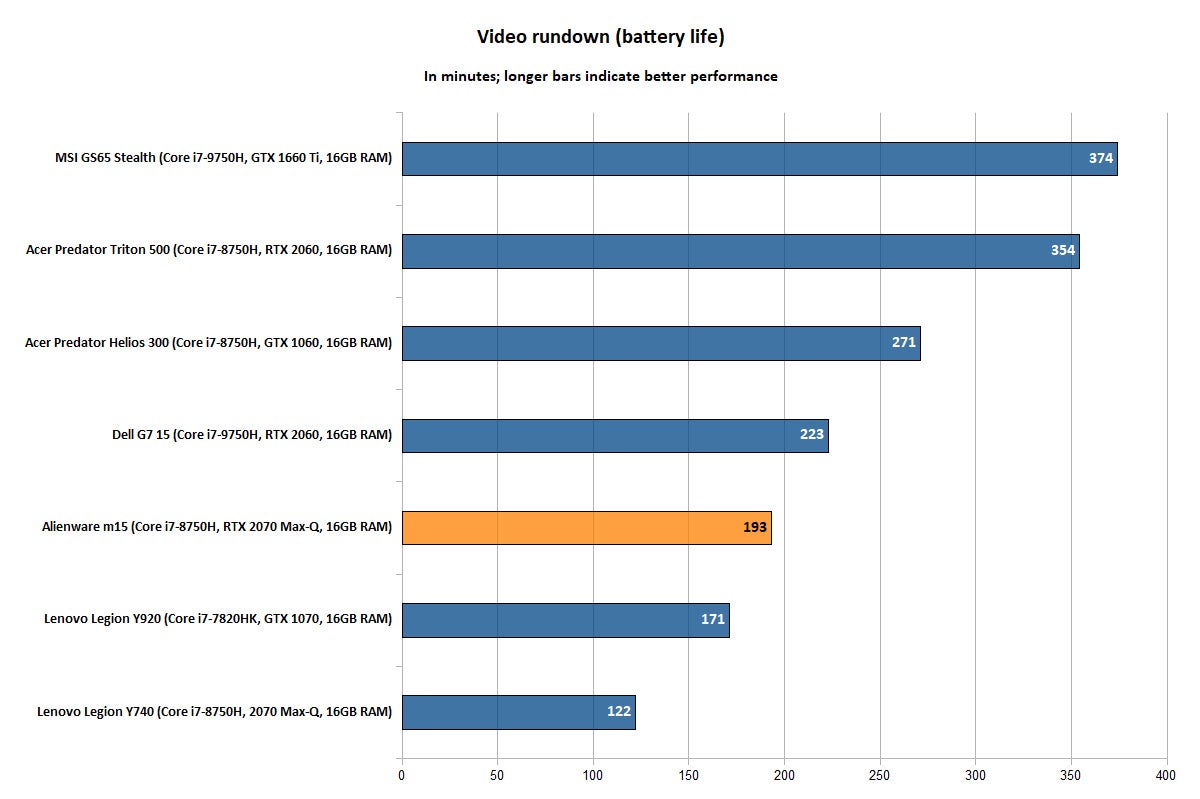 I still think the RTX 2070 Max-Q is in a weird spot, what with full-size GTX 1070 laptops remaining on the market, performing basically the same and usually priced much lower. And I think this particular Alienware m15 is in an even weirder spot, given there’s an m15 redesign already announced.

That said, this laptop doesn’t necessarily need to suffer for the sins of its parents. The OLED display is love-at-first-sight for me. Maybe not “I don’t care that it costs $1,000 more than some laptops with comparable performance” love, but…well, depends what you care about. I could certainly see someone making the argument at least, and the m15’s internals perform well enough to do the display justice. After all, if you’re buying a screen that looks this damn good, you want whatever’s on it to look good too, right?