In a world where countless free-to-play games and games as a service compete for attention, World of Warcraft remains one of the most fascinating titles on the market. It’s a 15-year-old game that dominated a genre and inspired so many competitors who would ultimately fall short of WoW’s dizzying heights. The game’s previous expansion, Legion, was seen as a return to form. Battle for Azeroth, Blizzard’s current expansion, has been far messier.

The antidote to many of the problems plaguing Battle for Azeroth was administered in the most recent content patch, Rise of Azshara. Patch 8.2, the midpoint in an expansion’s lifespan, bolsters Battle for Azeroth and is worth a return to the game for longtime WoW fans … but it also reveals many of the structural weaknesses showing up in World of Warcraft as a whole.

One of the biggest complaints about the first third of Battle for Azeroth has been a lack of content — or rather, a lack of content and rewards that players find fulfilling. The Mythic+ dungeon system, and raids, remain a highlight of Battle for Azeroth, and the original Kul Tiran and Zandalari campaigns were both well constructed. It was the rest of the world upon reaching level 120 that was underwhelming and frustrating.

The main features of Battle for Azeroth’s endgame content were all lacking at launch. There was only one Warfront, and it was infrequent. Add that Warfronts are incredibly easy, and are often filled with AFK folk, and the epic feature fell flat. Island Expeditions were one-note, with exceedingly rare cosmetic rewards. The Heart of Azeroth, and Azerite gear, were heavily RNG-based and felt like a far more stripped-down, unsatisfying system than Legion’s Artifacts and Legendaries. 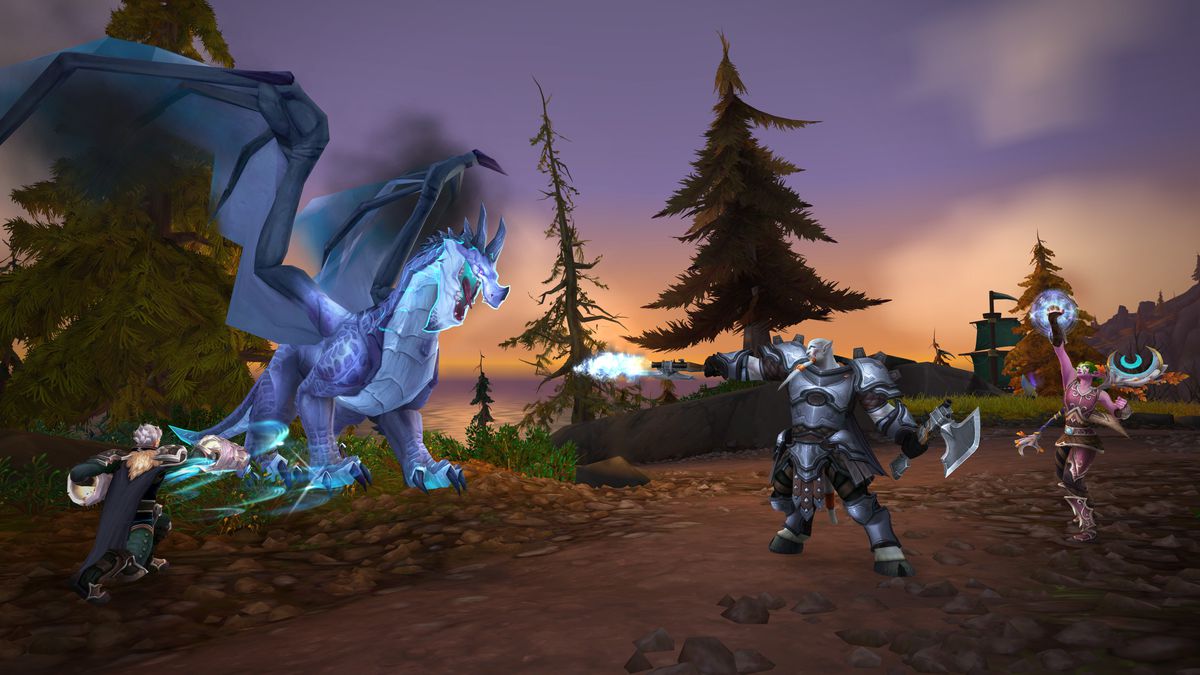 By Rise of Azshara’s release, all of these have been addressed. Expeditions are now more rewarding, happen more often, and have more scenarios to encounter. There are two Warfronts (with at least one more to go), which means they’re always available, and a new Heroic difficulty makes them tougher. The Heart of Azeroth has a whole new system, with more active abilities and no RNG, and that makes it feel more like an actual gameplay tool players advance in, as opposed to merely experiencing as a helpless passenger.

There are also two new gameplay zones. Nazjatar and Mechagon are both takes on World of Warcraft’s endgame content, and the contrast between them is striking. Nazjatar feels like an extension of the modern World of Warcraft design philosophy. I work through quests that take me through the story of Nazjatar and the Naga. I recruit bodyguards, level them up, and work my way toward milestones of reputation. There are daily quests and events in the area as well, secret mounts to acquire from vendors and rare spawns, and the Azshara’s Eternal Palace raid.

Mechagon, the second new zone, is far more experimental. I log in and figure out something to do — some kind of mount I want, or item I’d like to acquire. And then I just set out, doing quests and activities. The entire focus is far more sandbox-y, with lots of items to craft over time and little goals to achieve. The mood is also far more lighthearted in Mechagon, with a smaller-scale villain and a host of goblin and gnomish NPCs. It’s a welcome change of pace from the drama of Battle for Azeroth’s War Campaign and Old Gods plots.

Mechagon and Nazjatar almost feel like they’re a couple of petri dishes, and the developers are watching the reaction to both. They’re both very different zones that appeal to different kinds of players.

Both of these zones are well made, and most importantly, they mean every time I log on I have something to do. There’s always something to do in World of Warcraft — farming old raids for mounts or cosmetic items, leveling alts, or getting the gold to buy luxuries like the Auction House-toting Brutosaur mount, but those goals are longer and more abstract. Rise of Azshara provides constant and immediate small goals that I can pursue, and it gets me back into the game and the world. 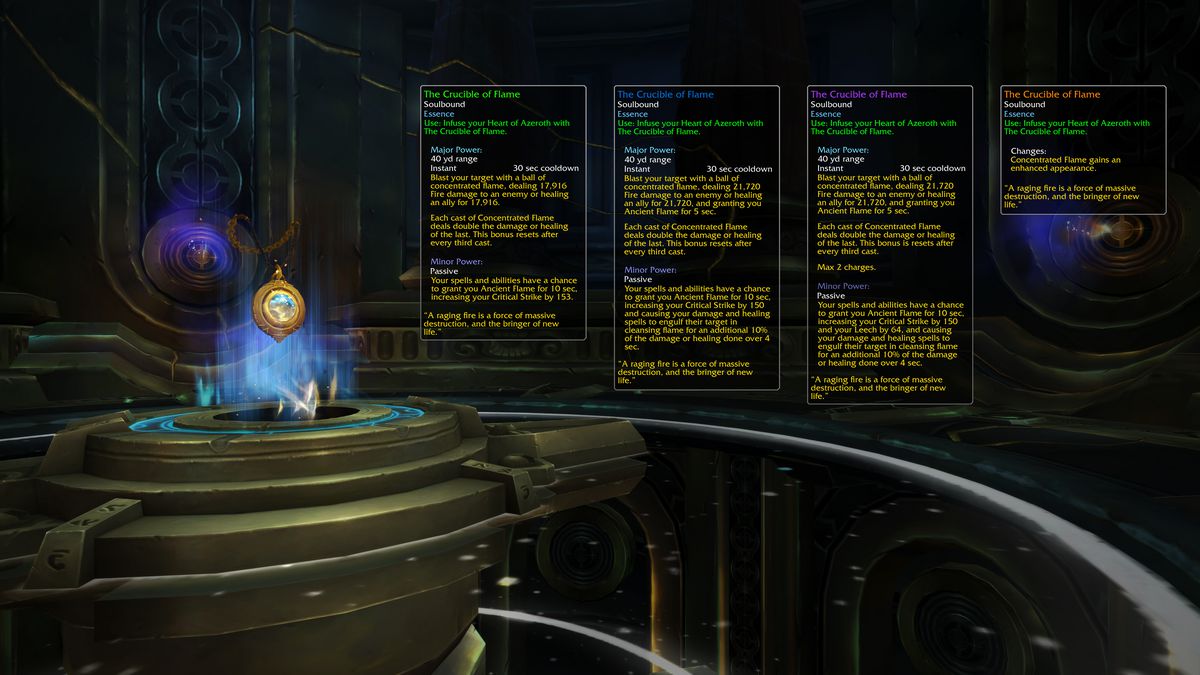 It seems as though Blizzard is so enthusiastic to get me into the action and to this fantastic new patch that it strains the narrative. After a naval chase, both factions are dragged into the hostile grounds of the risen Naga kingdom of Nazjatar. Lady Priscilla Ashvane, the Kul Tiran traitor, is now working with Azshara and the Naga. Azshara herself shows up to taunt and prod the players. Magni Bronzebeard needs your help with the Heart of Azeroth, an emissary from Mechagon shows up tot offer players an alternative questing hub, and Baine Bloodhoof must be rescued from Orgrimmar by heroes of both factions.

That chain of narrative events has little cohesion, and so it’s hard for players to find their footing. More importantly, it exposes the problems that plague the entirety of World of Warcraft. It’s interesting that one of the biggest complaints about Battle for Azeroth has been a lack of content — in a game that has existed, and been continuously updated, for 15 years.

The truth is that WoW is like a precariously wobbling tower. Each new addition is the only relevant part of the game. The idea of the game only starting at the endgame becomes increasingly odd when players can work their way up to level 120. There are countless hours of content that players can easily miss, and the only reason to return to old areas at max level is often cosmetic rewards. 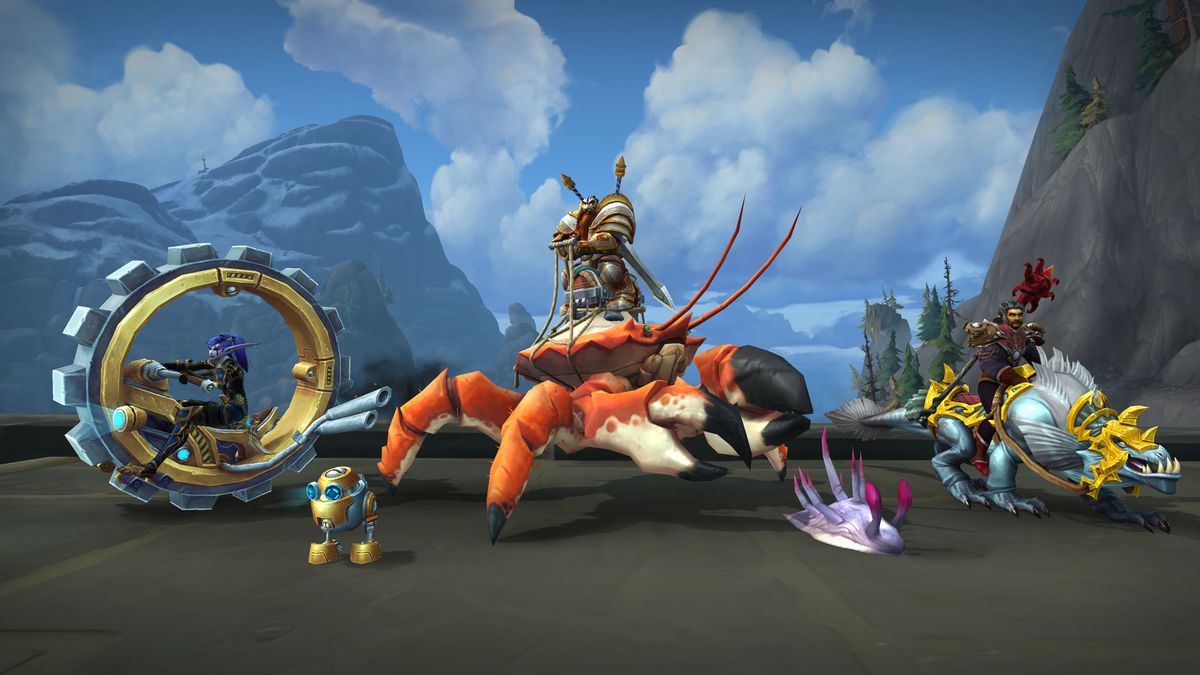 Even leveling alts and experiencing the game through a new perspective is tough. Allied Races, a promising new concept that allows new customization for player avatars, requires that I start back at level 20 and work my way up to the relevant content at 120. The story of the game no longer makes sense, due to retcons and time skips. After the Cataclysm expansion, which overhauled the 1-60 leveling experience, the 1-120 experience is chronologically out of order, jumping back and forth in time. Players gain experience so fast that they have no reason to visit giant swathes of the game world before they move onto the next zone, the next expansion, and eventually find themselves in Patch 8.2.

This philosophy of clipping out old content, making it irrelevant, and then preparing the next patch has become so problematic that even content and stories that kick off Battle for Azeroth, like the War of the Thorns, are no longer in the game. At one point, I went to Orgrimmar, where Sylvanas Windrunner charged me with finding the traitorous High Overlord Saurfang. I left her headquarters, the world phased, and there was Saurfang, hanging outside. Needless to say, it removed the urgency from my mission.

The end result is that everything in World of Warcraft is focused on funneling toward the most recent patch. The amount of cosmetic rewards, pets, achievements, and so on will likely mean that Nazjatar and Mechagon remain relevant in 8.3. But as time marches on, and more expansions come out, this set of content will become less accessible, putting World of Warcraft at risk for the same issues down the line. The risks of a forever game

A game usually has a finite campaign, or stays in a player’s rotation until they’ve grown tired of it. World of Warcraft has kept a player base by constantly evolving and reworking itself. Its competition is no longer other MMORPGs, but smaller and more agile games as a service. By comparison, World of Warcraft is a sprawling monster of a game … but it currently doesn’t take advantage of its massive library of zones, quests, and chains of progression.

Patch 8.2 is a very good patch, and enjoyable to play … but it drives home just how much the World of Warcraft is a selection of disconnected levels. The tower of content Blizzard has built is desperately uneven, and there are few fixes that won’t require large-scale solutions.

Battle for Azeroth won’t hold these answers; the gameplay changes that would need to happen are outside the scope of a single patch. The next expansion, and the one after that, and so on, would likely need to address the connective tissue between content patches. As it is, Rise of Azshara is a well-designed, gorgeous, and massive patch that addresses many of this expansion’s gameplay woes … but it’s still isolated, and doomed to eventually be left behind like the previous endgames of fantastic expansions.

There have been signs that Blizzard might find ways to bring the world together. Legion quests often brought us to old world zones, and the class quests brought back old characters and wrapped up dangling plot threads. Timewalking, as a system, allows players to go back and do older dungeons for modern rewards. Even the launch of World of Warcraft Classic suggests that Blizzard isn’t adverse to pulling from WoW’s past. Patch 8.2 has done a lot to secure World of Warcraft’s present. As this expansion progresses, I’m interested to see what Nazjatar and Mechagon mean for the game’s future.