After an elaborate, staggered release Gears 5 is being well received by fans and critics alike. While folks are praising The Coalition for everything from the game’s rock-solid framerate to its expansive open-world segments, one part of the game does fall a bit short in my opinion: Escape, the new three-player survival speedrun mode.

At its best, the mode is a tense firefight that escalates to a brutal crescendo. At its worst, it’s a frustrating slog that forces you to run the same lengthy sections of gameplay over and over again.

While flexible and customizable, Escape feels more like a sandbox than a hand-crafted experience. It seems to ask that players do the heavy lifting, scaling the difficulty on their own. But, with time — and additional content — it has the potential to grow into something more.

What is Escape mode?

At the core of Gears 5 is cooperative gameplay. That begins with the campaign itself, which offers three-player co-op start to finish. Meanwhile, Horde mode — introduced with Gears of War 2 in 2008 — is a five-player “comp stomp” against the game’s aggressive AI. Outside of adversarial multiplayer, that doesn’t leave smaller groups of players with all that much to do after the campaign.

That’s where Escape comes in, providing additional content for experienced teams of three, and filling a hole in content for players who want to work together in a new way.

Escape tells the story of a group of lightly armed and armored Hivebusters who purposefully get themselves captured by the enemy in order to destroy their strongholds from the inside out. Once ‘busters get in, the Hive’s destruction is all but assured thanks to the chemical weapon they carry strapped to their chest. Armed with only a pistol, limited ammunition, and a combat knife, it’s getting out alive again that’s the hard part. 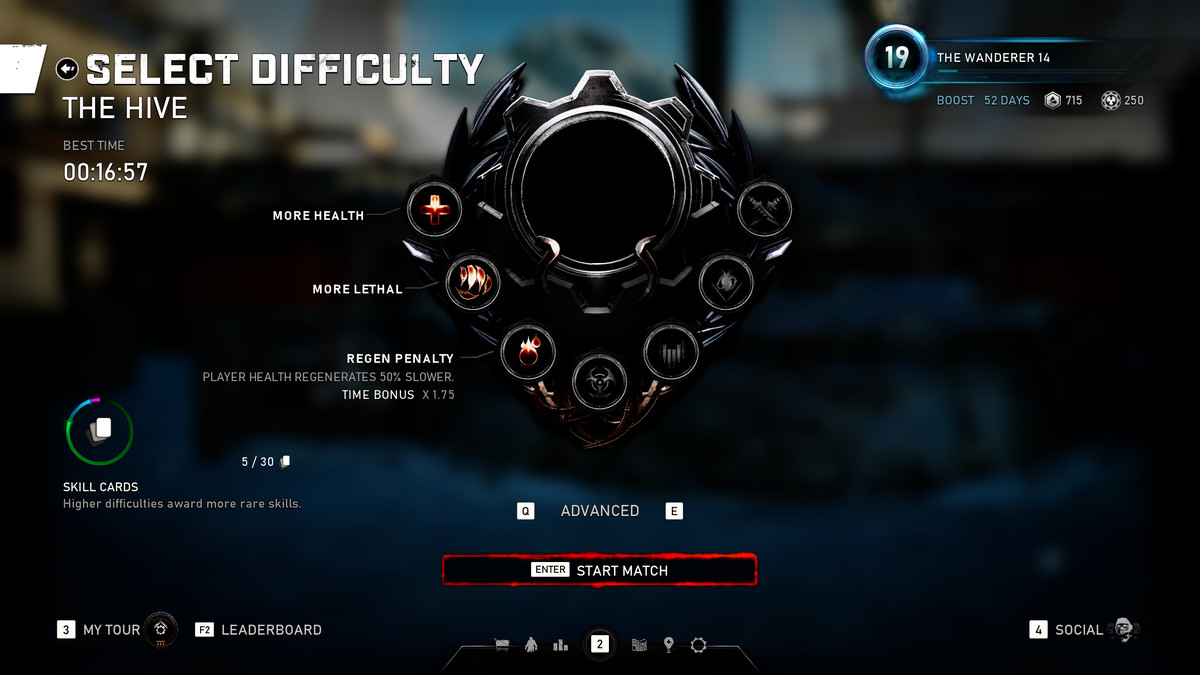 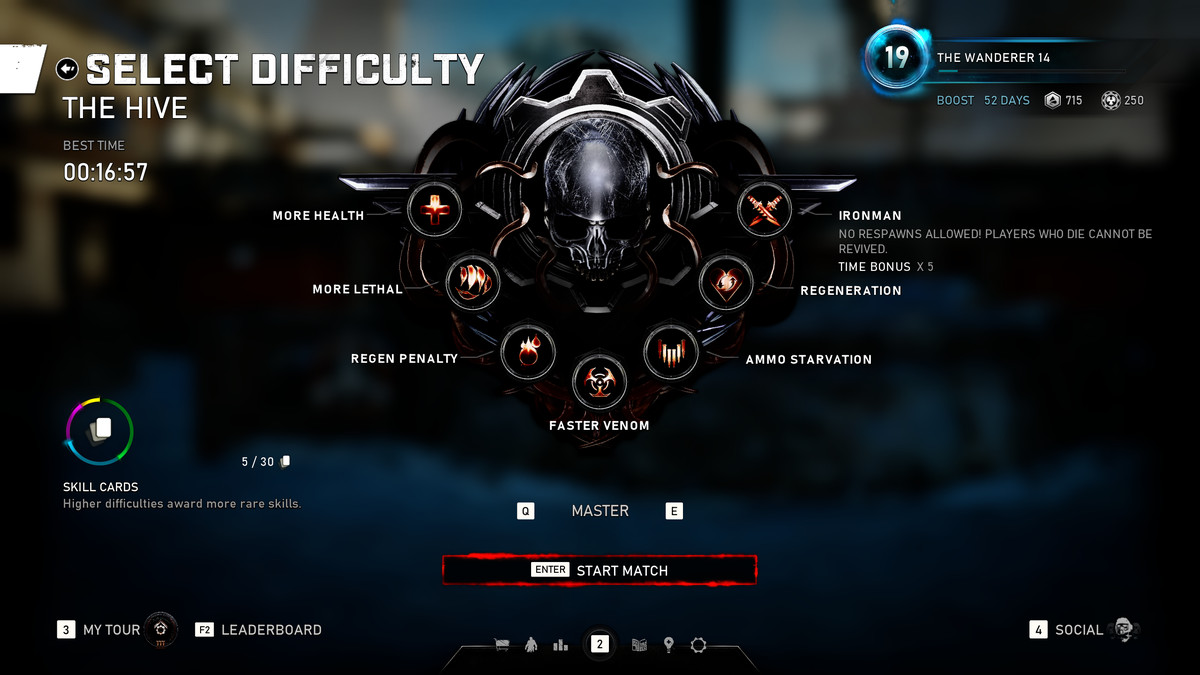 … the highest of which will be well out of reach for most players, until they’ve unlocked a bunch of perks specific to this mode.
The Coalition/Microsoft

The action plays out in two chapters. The first is a survival segment. With players desperately outgunned, moving in close to the enemy is key. Gears 5’s new light stealth mechanics come into play on some maps as well, allowing players to move quickly and quietly to get the jump on enemies in the hope of taking them down silently. On other maps the game turns into a sillier display, with players rolling every which way to avoid attacks while lashing out with their knives.

The second segment is, invariably, an all-out assault. Players finally get access to a cache of weapons, granting them lethality from virtually any range. Ammunition is still scarce however, and only with careful planning and no small amount of luck can they hope to break through to safety.

Where that gameplay loop breaks down is when groups come up against a challenge that they simply can’t move past. Maybe they don’t have enough ammunition to make it through, or perhaps they simply don’t have the skills — either real-world skills, or unlockable perks that must be earned and upgraded over time — to maximize their damage output.

Either way, the only solution at times is to quit a match and start it over. Once back on the main menu players can adjust the difficulty setting (there are seven in total), or relaunch and hope for a slightly different enemy spawn the next time.

But there’s not all that much difference between them all in my opinion. Perhaps one stealth segment has more faster-moving, weaker enemies than another. Maybe the paths diverge at the mid-point, threatening to split the party or further limit their resources. But they all sort of look and feel the same. 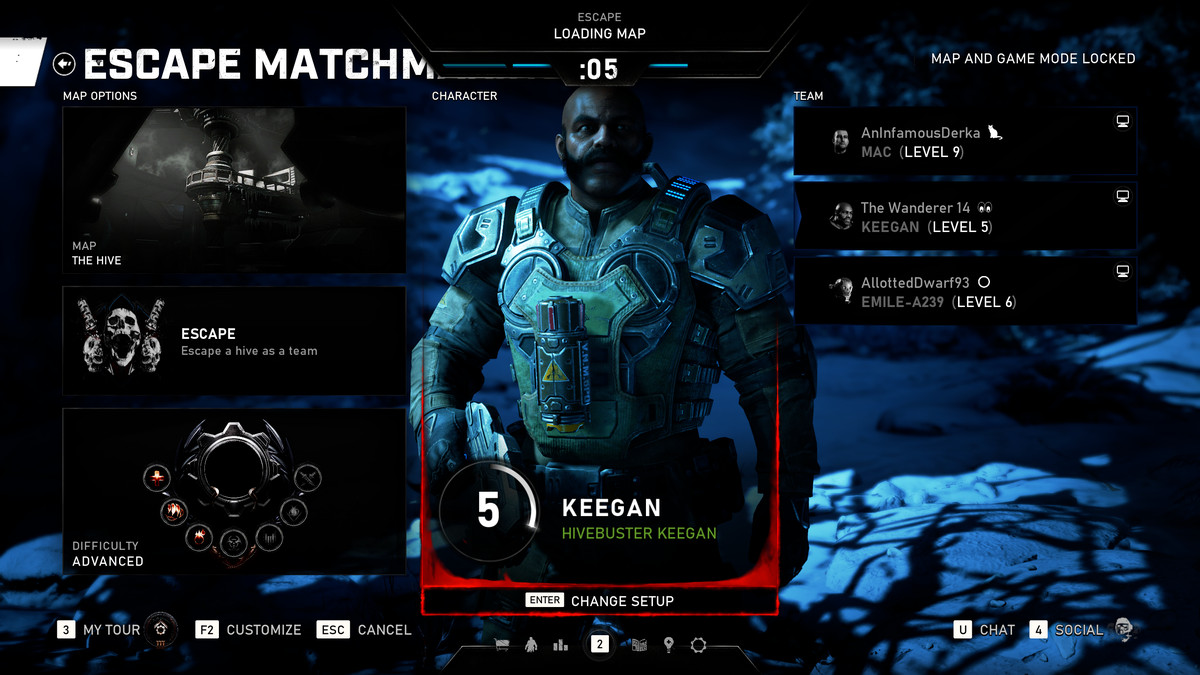 Launch week locks players to just three of the potential six playable characters in Escape mode. No duplicates are allowed, making grinding for progression a challenge.
The Coalition/Microsoft

A bigger problem is the limited palette of player ultimate abilities, like shields or additional ammo drops. These abilities need to be charged up, so rarely are they available more than once or twice a match. Making matters worse, when they are available they don’t confer all that much of a benefit. They don’t even last all that long.

For Escape mode to succeed, for it to earn its place in Gears 6, there needs to be more synergy between these ultimate abilities. There’s currently only six characters are available at launch, and I expect that to expand in the coming weeks and months post-launch.

Perhaps those six will evolve as I grind through the each character’s dozens of unlocks, but grinding away like this for incremental advancements will only go so far to keep the audience’s attention. There simply needs to be more diversity in the pace and structure of the levels themselves to keep player’s attention.