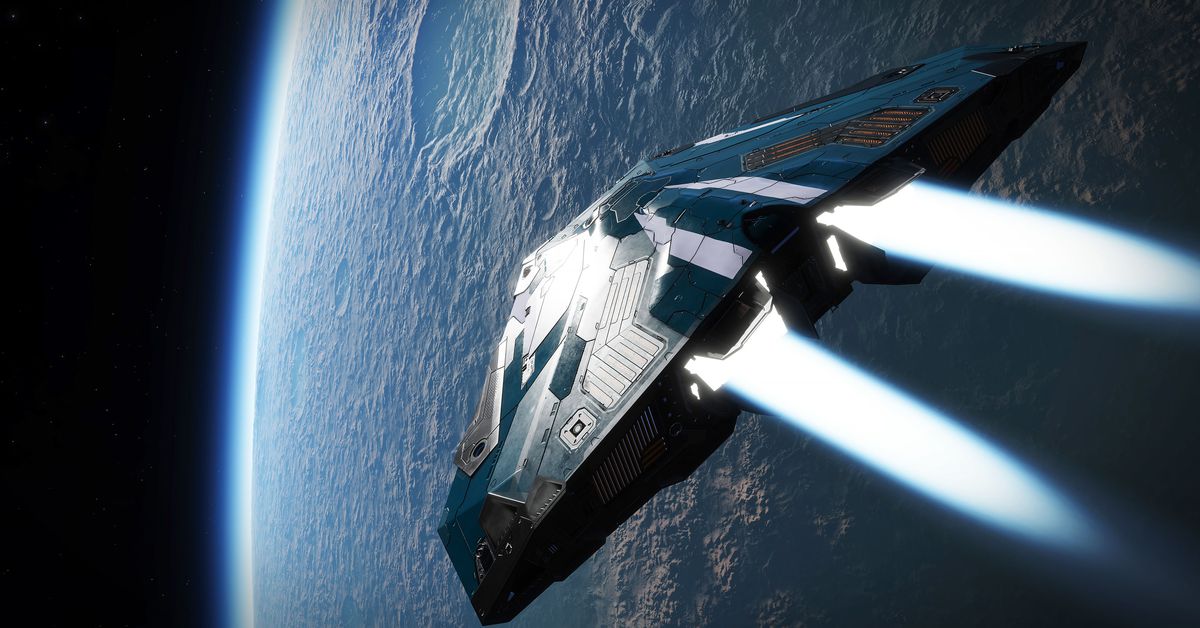 I’ve been traveling between the stars in Elite Dangerous for some time now, often for business but mostly for pleasure. The spacefaring game contains all 400 billion star systems in our Milky Way galaxy, and I’ve traveled the breadth of it three times already to find things that no one has ever seen before. It’s an enormous game, but it’s taken the better part of seven years of ongoing development for it to finally make me feel small.

On May 19, Frontier Developments will launch its next great expansion, called Elite Dangerous: Odyssey. Not only will the game add tens of thousands of new destinations for players to visit, it will add the ability to walk around on your own two virtual feet — something that’s been impossible since the game first launched in 2014.

After nearly a decade of play, I’m now able to stand my avatar up, leave the confines of my starship, and kick up the dust on new worlds. The experience has been breathtaking.

Part of the reason is because the ships in Elite are just so damned big.

The Asp Explorer that I’ve been flying around in for most of my time with the game is just a bit longer than a Boeing 747, but that has been impossible to perceive while trapped inside the cockpit. Even rolling around outside in a wheeled vehicle doesn’t really do it justice. Stepping out onto the landing pad, the massive orange bulk of the Evelynne Christine looming over me is an incredible experience.

Of course, understand that mine is a roughly square ship, and many other models are a lot longer. Take the Federal Corvette, shown passing overhead in a recent video on YouTube, which is roughly two-thirds the size of the USS Intrepid, the World War II-era aircraft carrier parked in New York. A slow, low-level pass feels like stepping into the opening crawl of the original Star Wars.

In addition to the game’s newfound sense of scale, another way that Odyssey improves the experience of playing Elite is with a new and improved planet generation system. It’s all thanks to a small team led by Dr. Kay Ross, a physicist turned programmer who has reinvigorated the game’s rendering engine.

The improvements are immediately visible as you close in to land on one of the game’s trillions of bodies. There’s more detail, to be sure, including fist-sized rocks and clouds of dust once you’re standing on the surface. I can even see my own footprints in the dust. But the texture and complexity of those surfaces has been upgraded considerably. Craters are more defined, both through their shape and the application of textures and shaders. Landscapes are more varied, less like a colorful ball of cake frosting and more like what I imagine distant planets with their own unique geology could be.

And will you just look at those sunsets? Planets with tenuous atmospheres — where there’s just a little bit of gas stuck to the surface, but not enough to alter the flight characteristics of your starship — create some truly epic vistas.

The light from nearby stars is able to mix with the unique composition of the gases in a planet’s atmosphere. Combined with the realistic periodicity of the star systems themselves, that means they look different every time you visit. I’m looking forward to returning to places like the Dryau Awesomes, known for its otherworldly purple lights, just to see how they’ve changed with this expansion.

There’s a lot more to the game that I haven’t yet explored, including first-person interactions with non-player characters and quest-givers. When the expansion goes live, players will even be able to use the background simulation (known as the BGS) to impact the economics and political systems throughout the galaxy in the year 3307. Time will tell if those new hooks — and the accompanying first-person shooter mechanics — will expand the game to larger audiences.

But for now, diehards like me — or anyone else looking to explore the Milky Way — are in for a treat.

Elite Dangerous: Odyssey will arrive for consoles later this year.

Thrustmaster is an old hand at flight sticks. Their 16000M series is compatible with games like Elite: Dangerous, MechWarrior 5: Mercenaries and the upcoming Microsoft Flight Simulator. It’s also the control stick of choice for bounty hunter Din Djarin on Disney Plus’ The Mandalorian.