In the real world, humanity has spent the last few days celebrating our first real look at a black hole. No Man’s Sky players who traverse galaxies in search of adventure are well beyond that point, though. They’ve been through black holes already — virtual ones, anyway. So they’ve moved on to the next logical question: Where do black holes send you, exactly?

In No Man’s Sky, black holes are a part of everyday play. When you come across one, you have to make a decision: Do you step inside of the black hole and try your luck, or do you continue on your way? Brave players who venture forth are treated to a delight of the senses; Hello Games’ interpretation of what traveling through a black hole must look like. And then you arrive on the other side, completely lost — there’s no way to tell where a black hole will send you — but a little thrilled.

For most players, that’s that. Hardcore fans, however, follow the game closely enough to have noticed that an update sometime last year to No Man’s Sky changed the inner workings of a black hole. Now, black holes will always spit you out in the same place, provided you’re using the same entry point. Naturally, players wondered if they could use this information to travel across the galaxy toward points of interest more efficiently, using black holes as a space highway.

“These could include civilizations, planets for building bases, or anywhere that the traveler would like to reach via normal methods (instead of using a Portal, which carries restrictions),” wrote No Man’s Sky player huskerbsg on Reddit. “As a result of collecting this data, we’ve come up with a method of reducing long journeys by ‘chaining’ together black hole entry and exit points in an effort to reach a destination with the minimum amount of warping.”

And so players — who started calling themselves the Black Hole Suns — started cataloging black holes en masse, first by the dozens, then by the hundreds. As of this writing, black hole cartographers have collected information on over three thousand black holes across the galaxy. All of these black holes have been visualized on a graphic which gives us a sense of what the No Man’s Sky universe actually looks like when you pull back the curtain. Each blue dot is a black hole: 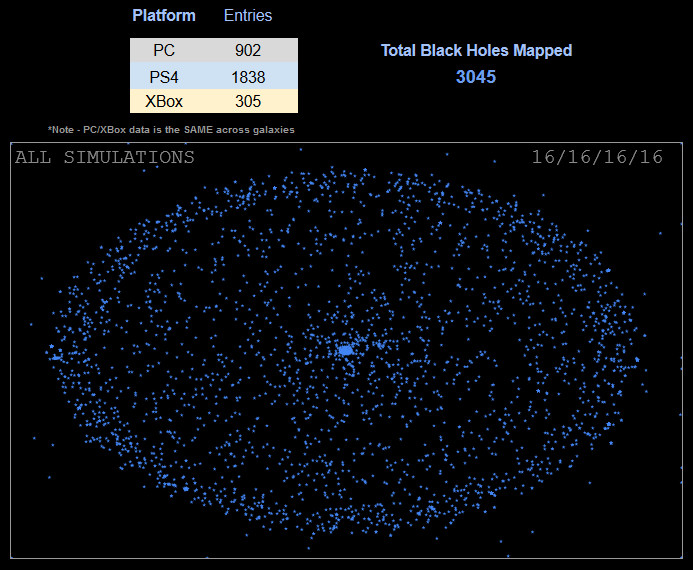 Curiously, the coordinates for these black holes are constant throughout platforms, but their exit points differ depending on the galaxy. Black hole explorers have used this information to build a No Man’s Sky travel guide, as well as a distance and route calculator, both of which help adventurers travel vast distances. Some players have even started using specialized ships built with the explicit purpose of mapping more black holes — which is important, because black hole travel damages vessels.

While crossing the three thousand mark is a huge accomplishment worth celebrating, some players are wary of what’s to come. No Man’s Sky is getting a big update this summer, which means the galaxy will change along with it. In the past, entire civilizations have been lost with new updates. There’s no telling how much things might change. The entire galaxy might reset. Black holes might start working differently, or they might change location altogether. But these possibilities aren’t stopping the Black Hole Suns from mapping what they can.

“It is our intent to study the new behavior, determine if the data can be collected and leveraged as it is today, and get back on the horse,” huskerbsg wrote. “We will put the word out to the gang of researchers so that we can repopulate the data if necessary.”