Endless runners like Temple Run or Canabalt are perfect for the times I want to fidget around with a game, but don’t want to put in too much effort. But Summer Catchers, a new endless runner out now on Steam, provides expected and simple arcade thrills while also keeping my attention with a charming story filled with mysterious pixel art creatures.

I take control of Chu, a plucky young girl who lives in a frozen northern land, desperate to experience a summer’s day. I partner up with a local woodsmith, a friendly beast man, who constructs the vehicles and equipment that I need for my journey. Each run of Summer Catchers requires me to hop into my ride, load it with various pieces of kit, and drive as far as I can until I run out of the doodads that let me avoid the hazards in my path. There’s a shield that blocks incoming hazards, a rocket that helps me race up large hills, and a booster that lets me jump over pitfalls.

All of this riding and crashing isn’t just for fun. I have to complete various quests before I can move onto a new locale on my journey. For instance, in the game’s starting area, I have to deposit seeds for new plants, take down poisoned trees, and collect magic mushrooms for my animal pal. During all this, I may run across dazzling creatures like a gentle giant who stalks through the trees or a glittering, ethereal deer. It’s these quests and random encounters that keep me coming back for more.

There are also a fair share of things to buy with all the currency I pick up while playing. Even if I can’t complete one of my quests on a run, I can save up to buy a handful of cosmetic items, like new vehicles and outfits. The only downside of this process is that I also need that currency to buy the necessary gear required to make each run last longer. It’s a balancing act.

The gear system can also become frustrating, especially since I need to use up an item before another random piece becomes available. This can lead to some messy runs, where I have to needlessly waste equipment in the hopes that a piece I do need becomes available. 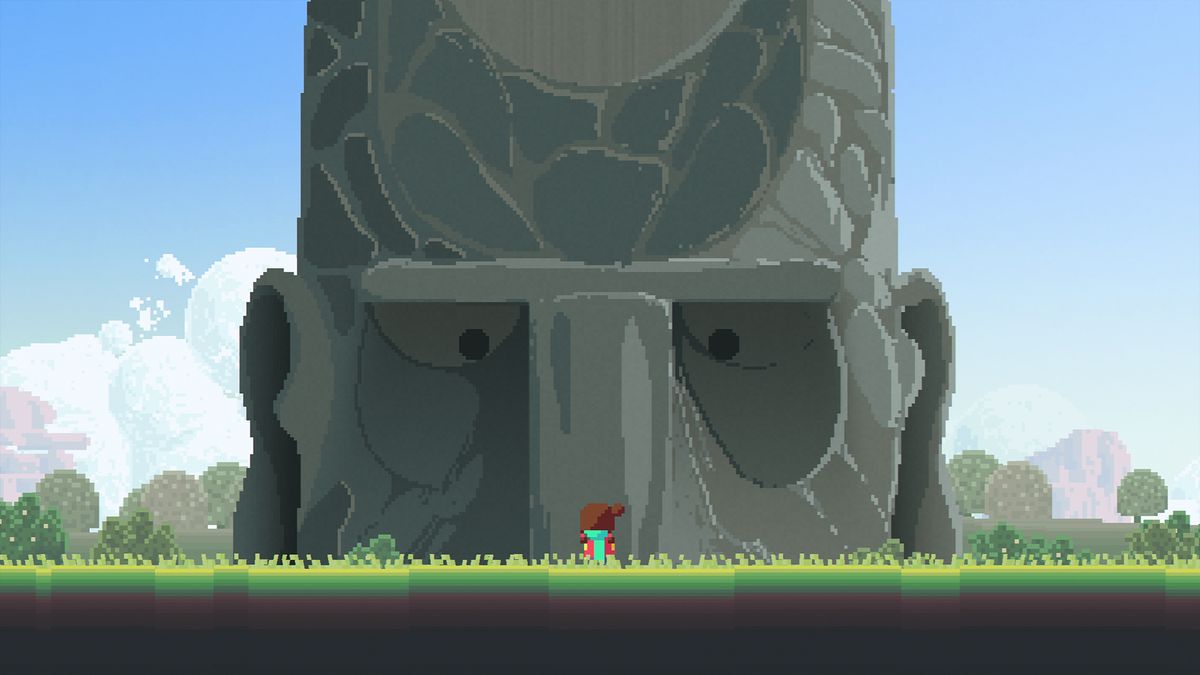 Oh, hi. I didn’t see you there.
FaceIT/Noodlecake Studios

This way of handling items is especially troublesome during the first boss-like encounter, where I need to run away from a creature for several minutes while dodging its attacks. Since I can only escape the monster’s attacks with certain pieces of gear, and certain hazards can only be overcome by specific items, the unpredictable nature of my available inventory made the encounter difficult to successfully plan for.

Each failed attempt at escaping means I have to go back to the shop, purchase more gear, and try again. It’s an unneeded moment of specificity in a game that otherwise celebrates unpredictability.

Thankfully, the game’s mysteries motivate me to press on. The encounters with massive and gorgeously-designed creatures happen at random, so disastrous runs can end up becoming magical if I’m lucky enough to encounter a new creature.

The low-impact gameplay, partnered with promise of witnessing a mystical new beast, adds a layer of whimsy and even majesty to an otherwise straightforward genre. Knowing that a jaw-dropping encounter could cap off one of my many, many crashes makes each run worth the trip.

Play Legend Of Zelda: Link's Awakening In Minecraft With This Mod, Because Why Not?