Finding the right kind of weapon to use in an RPG is an essential task. But game designers too often saddle us with the same selection from the armory we’ve seen a hundred times: swords, axes, spears, bows, and so on. I’ve longed for a game with an expanded idea of what’s possible in fantasy weaponry.

Thankfully, The World is Your Weapon, a plucky new RPG out now on Steam, doesn’t hold me back. Nearly every object in the game can be used in combat, from buckets of bath water to entire cliff sides. I’m free to use whatever I’d like as an object of destruction, for the first time in a long time.

I take on the role of Weaco, a young arms merchant on the hunt for a legendary sword. I must find and sell various weapons in my shop in order to fund my journey, scouring the lands outside my village, hunting monsters and crawling through dungeons to discover the whereabouts of the Legend of Legends Sword, also known as the LOL Sword. Can you use a pile of bones as a weapon? You sure can!
kagaya/DWANGO Co., Ltd.

Weaco starts the game with zero inventory, despite being an arms dealer. Worse than that, the game immediately begins with combat. I have to scramble to find some means to protect myself. There’s a spade next to me but, since I’m no shovel knight, I want to put the game’s name to the test. What about the skeleton beside the farm tool, can I pick that up and use it as a weapon? Yes! What about the big tree on a patch of grass, can Weaco wield that? Most certainly! The patch of grass!? Somehow, yes! It’s also a weapon.

In fact, just about everything that isn’t a non-player character or enemy at full health can be used as a weapon. But even that is temporary; enemies that are low enough on health can be grabbed and swung like swords or axes. Each weaponized item starts with unknown stats when I first grab it, and the only way to learn its combat potential is to smack an enemy in the face with it. Each weapon’s stats, durability, and special attributes are revealed once they’ve been used to harm an enemy. 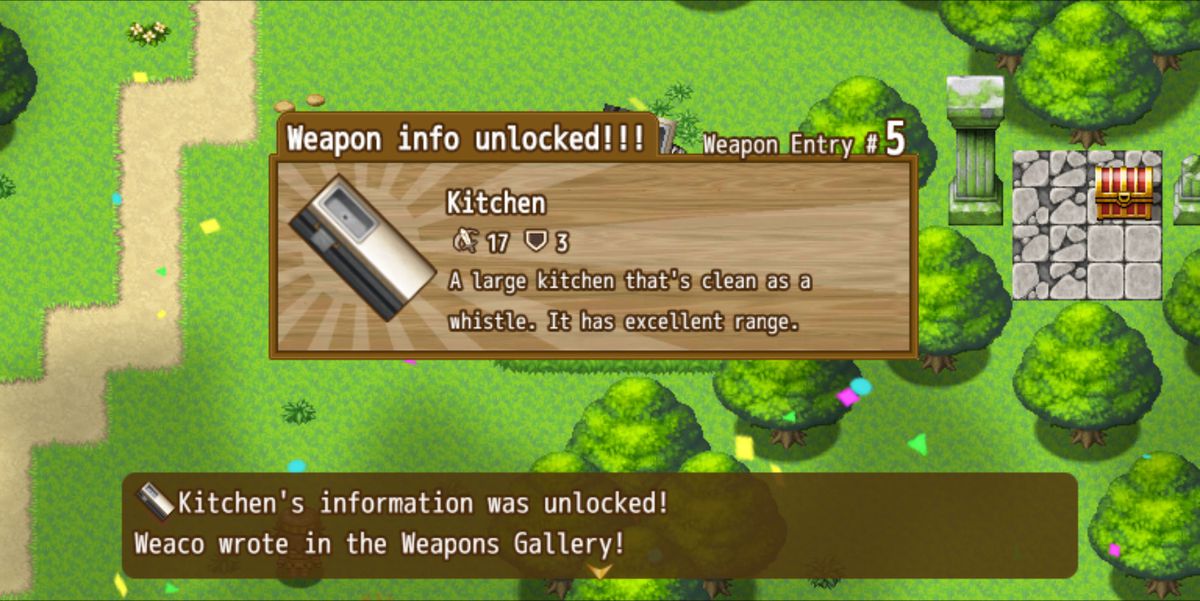 Once you use a weapon, you can see all its stats
kagaya/DWANGO Co., Ltd.

Actual weapons, like swords, have high attack strength, as I expected. The more oddball weapons, like refrigerators or poisonous swamps, are far less powerful, but they often have additional skills such as the ability to freeze enemies or poison them. All weapons have durability points, which dictate how long they will last in battle. Each attack that connects costs one durability point, and the weapon will shatter once they have all been used. Thankfully I can craft any weapon I’ve used in combat at the local smith, although it will cost me.

Combat is always the same, despite the variety of weapons. Time lurches forward with each movement, all the NPCs and monsters will take their next action if I jump to another tile or swing a weapon.

Moving at my own pace is great if I’m planning how I want to attack a group of enemies. Since I can switch weapons on the fly, I might use a low durability, but high attack strength weapon first, then switch to a more durable but weaker weapon to finish off a foe. The ability to be so flexible in combat adds flavor and a bit of absurdity to the game, especially when I’m switching between weapons like a field of dry grass that has a sweeping attack and finishing combat with a durable stovetop.

One of the more interesting byproducts of the game’s design is that I could use the, “pick up just about anything” idea to solve simple puzzles too. For instance, there is a house in the beginning of the game with a locked door. If I click the grab button on its facade, I can actually pocket the entire outside of the house, leaving only the locked door standing. From there, I can just stroll directly into the house while the home’s owner wonders where in the world her house went. 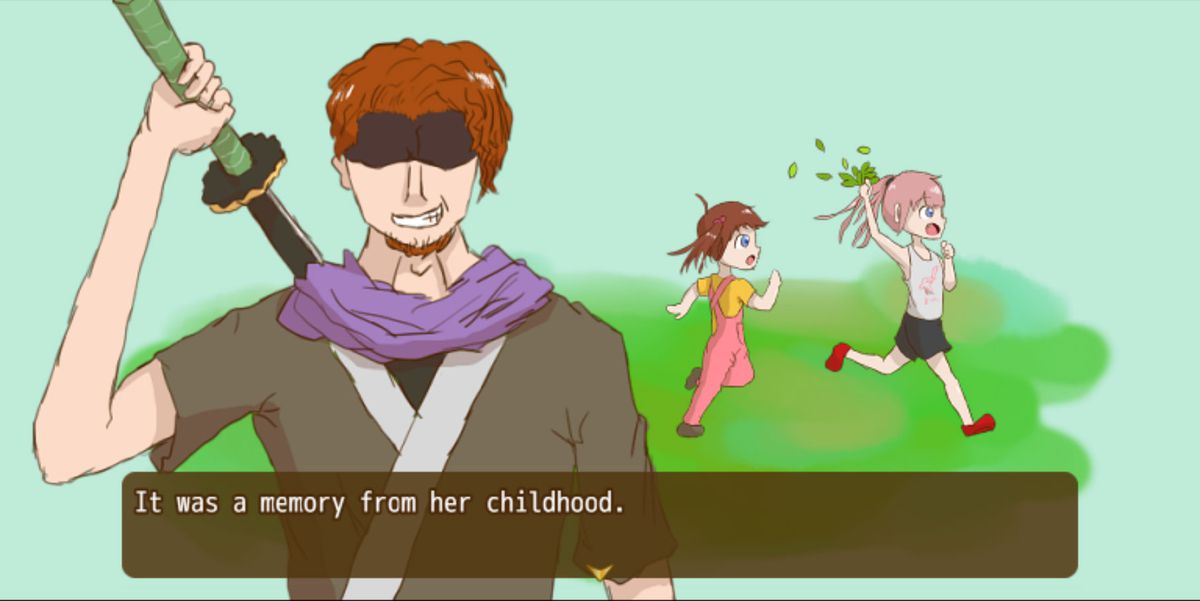 The art style is simple and lets the game’s idea do the heavy lifting
kagaya/DWANGO Co., Ltd.

The World is Your Weapon’s playful attitude towards the usually stuffy RPG genre is refreshing. It eschews the gorgeous, hand-drawn art many of its contemporaries employ and replaces it with an amateurish, yet charming style. It’s jarring at first, but it helps set the tone.

The game lured me in with one simple promise: I can use anything as my weapon, even the goofiest item I can imagine. This is one of the more surprising and inviting fantasy worlds I’ve played through in recent memory. If it exists in the world, I can probably hit someone with it.

All the bizarre possibilities kept me running around to discover what I could use in a fight. The World is Your Weapon makes it pretty clear that just about anything can be used as a weapon, but the delight is in proving that point over and over again. Even after so many hours, the single-note joke has yet to get old.