Dauntless is a pretty accessible game. The early missions will walk you through a lot of what you need, but there are still some things we wish we’d known when we started. Below are nine tips to make your Slayer journey a little easier.

All that blue stuff is aether — and it’s useful

It’s mentioned a few times throughout your introduction to the game, but where you’ll actually encounter aether is never really emphasized in Dauntless. The answer is: It’s all over the place. Aether wisps are those glowing blue orbs scattered around the arena. They’ll charge your lantern instant ability a little and increase your running speed. Aether vents are those blue cracks in the ground of the arena, usually near where you find a Behemoth. When you harvest these, they’ll give you a chunk of health (just don’t hog it if you’re in a group) and charge up your lantern.

Gather all that stuff while you’re looking for the Behemoth

There’s not a lot going on the arena when you drop into a Behemoth hunt. There’s you and your friends, a monster out there somewhere, and very little else. 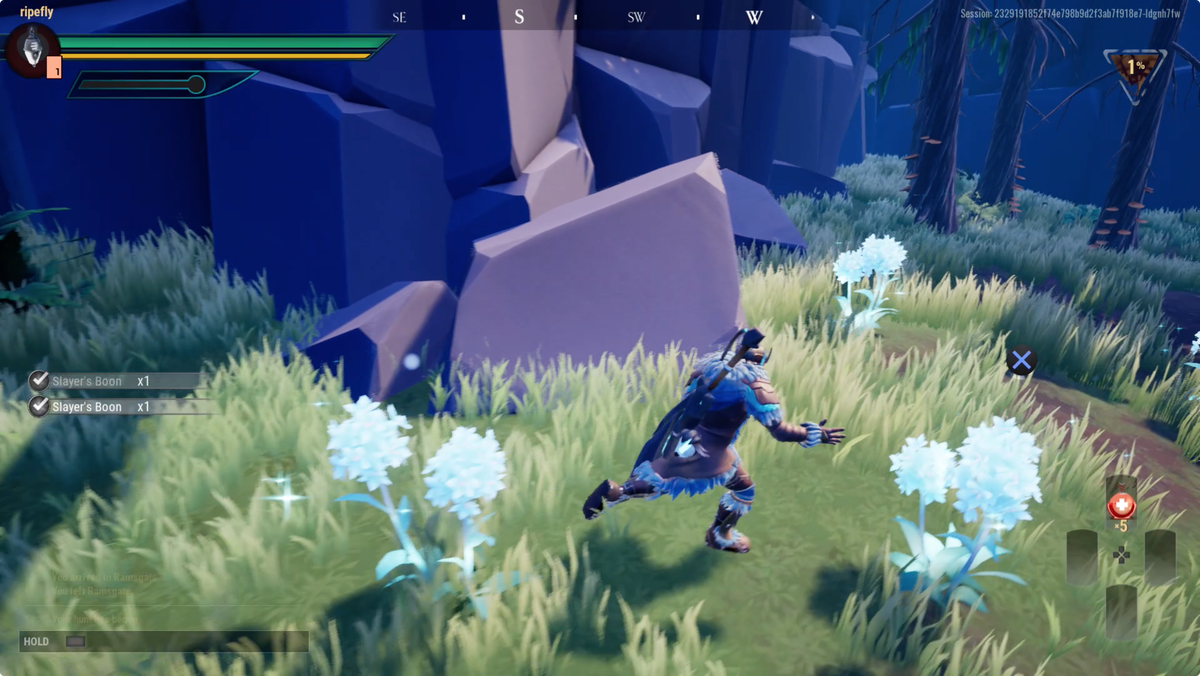 While you’re running around looking for your quarry, take the time to pick some flowers, collect aether wisps, and gather rocks. It’s tempting to just sprint through the arena and get on with the fight, but those flowers and rocks are crafting reagents that you’ll turn into useful potions back in Ramsgate.

You have combos — use them

Behemoths have a, well, behemoth pool of hit points that you have to drain to slay them. It’s tempting to fall back into spamming the quick attack button. 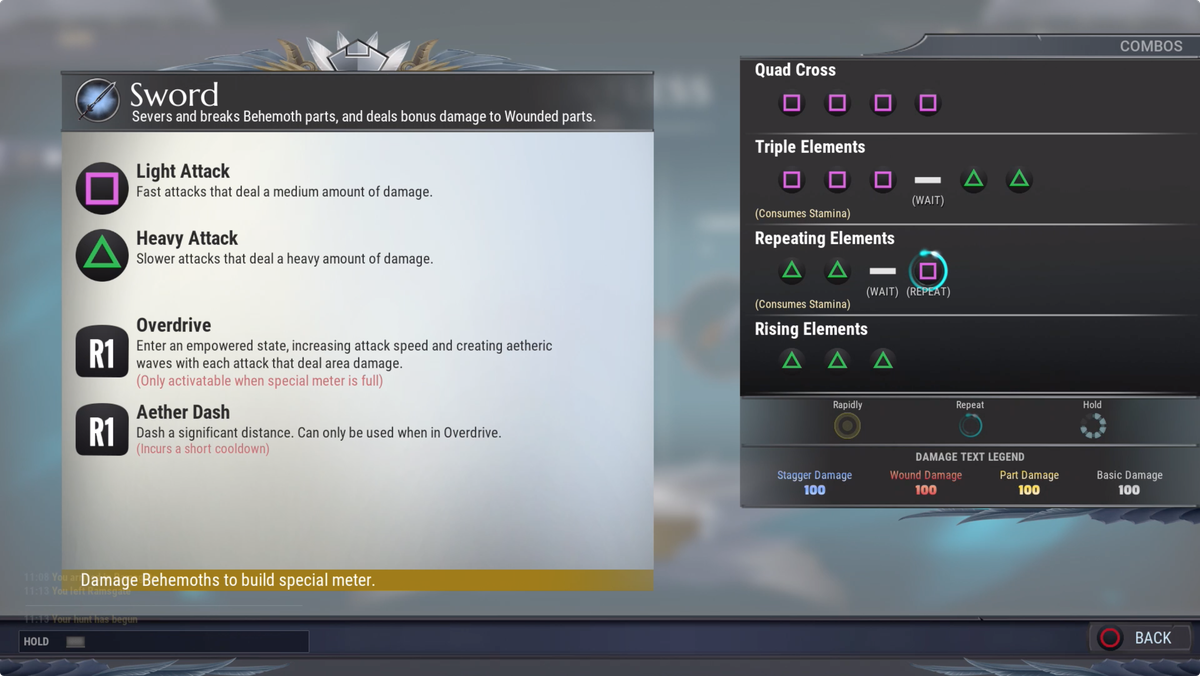 But you have some combos at your disposal that will deal some extra damage. Each of the six weapon types have their own moves. You can see them listed in your pause menu under the Moves tab to the far right.

Grind to get orbs for upgrades

You’re going to have to grind in Dauntless. That’s just the kind of game it is. But you can grind smartly so it doesn’t feel like busy work.

After you slay a type of Behemoth a few times, you’ll be out of armor and weapons to make from it, but every additional hunt is going to earn you Slayer Mastery experience and materials. Specifically, breaking off parts of a Behemoth will earn you orbs of that Behemoth’s type — Neutral Behemoths give you Neutral orbs, Blaze Behemoths give you Blaze orbs, and so on. Take those orbs to the armor or weapon shop, and use them to upgrade your armor and weapons and increase their defense and damage.

Knowing what orbs you need (or want) lets you pick the right type of Behemoth to hunt. That, in turn, lets you level up the corresponding gear. It’s a pretty standard grind loop, but figuring out where materials — specifically orbs — come from takes a while to figure out. 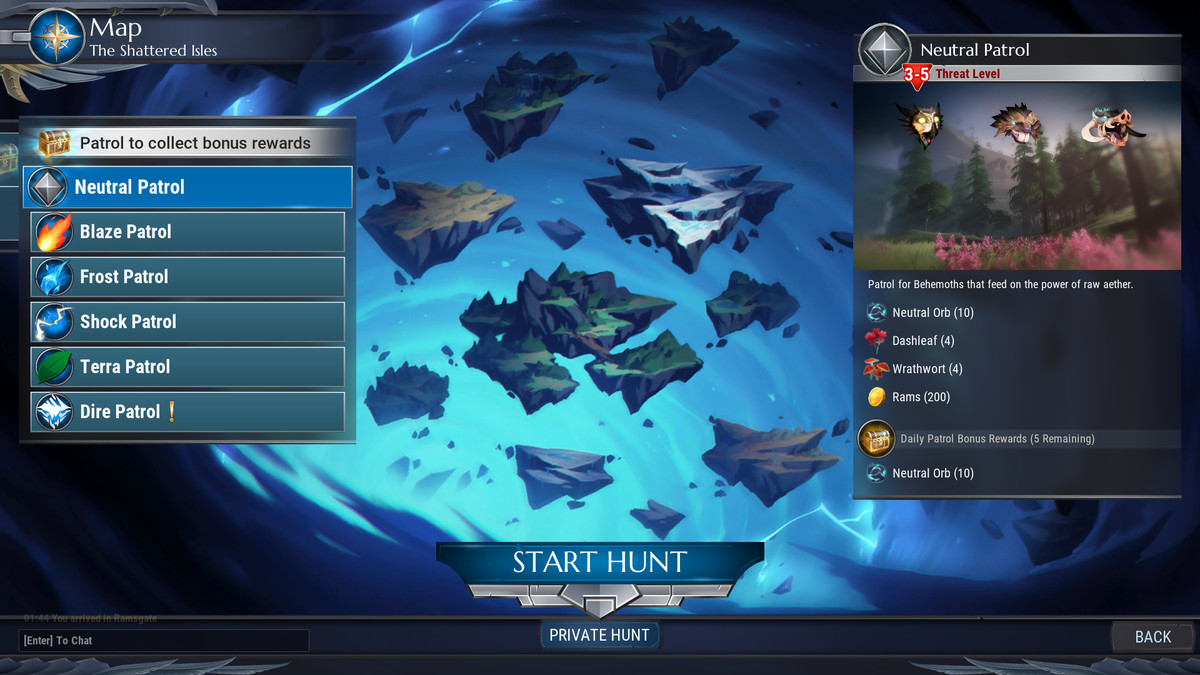 Somewhere around Slayer Level 8 or so (that’s where we were at least), you’ll complete Katerin Sorrel’s “City on the Verge” mission. After that, you’ll unlock Daily Patrols that will make your grinding much, much faster.

These hunts will serve you up a random Behemoth of your chosen element type. Every day, you’ll get a bonus for participating in Daily Patrol hunts: extra orbs of that element type. This can be a fast and efficient way to improve your items. And you’ll probably get to help some low-level Slayers along the way.

Diversify your weapons and armor to match Behemoth types

Any Slayer can switch between weapons. Within each weapon type, you can craft multiple versions from different Behemoths.

Each Behemoth falls into one of five elemental categories: Shock, Blaze, Frost, Terra, and Neutral. That type tells you the kind of orbs they’ll drop. You’ll also know the benefits you’ll get from that Behemoth’s armor and weapons — Blaze Behemoths become weapons that deal Blaze damage, Frost Behemoths become armor that grants protection against Frost.

The elements are paired off. Shock Behemoths are weak against Terra damage, and vice versa. The same is true of the Blaze and Frost elements. (Neutral is, well, neutral.)

Use this to your advantage. Equip your best Frost damage weapon to hunt a Blaze Behemoth. Wear your best Terra armor against a Terra Behemoth.

Equip Cells and perks for bonuses

Early on in Dauntless, you’ll probably want to build any weapons and armor you can afford. But once you start encountering Dire Behemoths, you’ll need to dress more strategically. 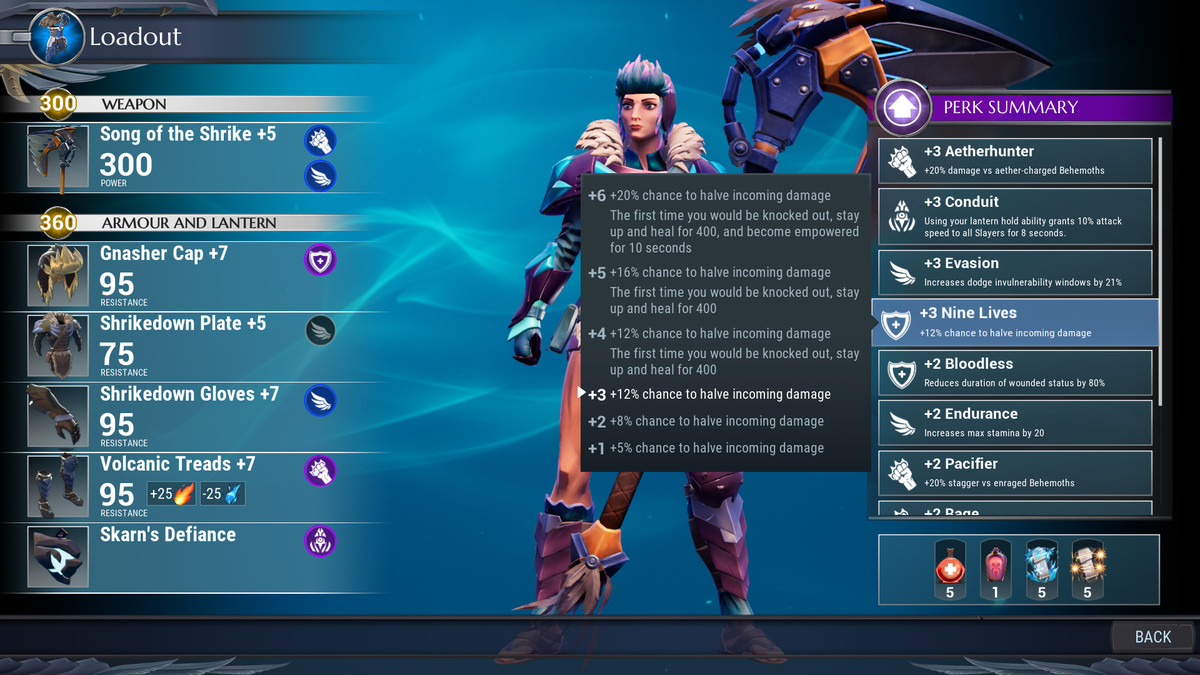 Different armor pieces have different perks. The same applies to Cells, which are perk enhancers you get from opening Slayer Cores. Your weapons and armor have slots for these Cells, and their perks can be very powerful. When they’re powerful enough, they might even change the way you play. For example, the Nine Lives perk has a chance to halve damage when you get hit.

Perks can also become more powerful, depending on the number of items you have with a given perk. At lower ranks, Nine Lives just lowers incoming damage. After rank four, it’ll also revive you once a hunt for free. 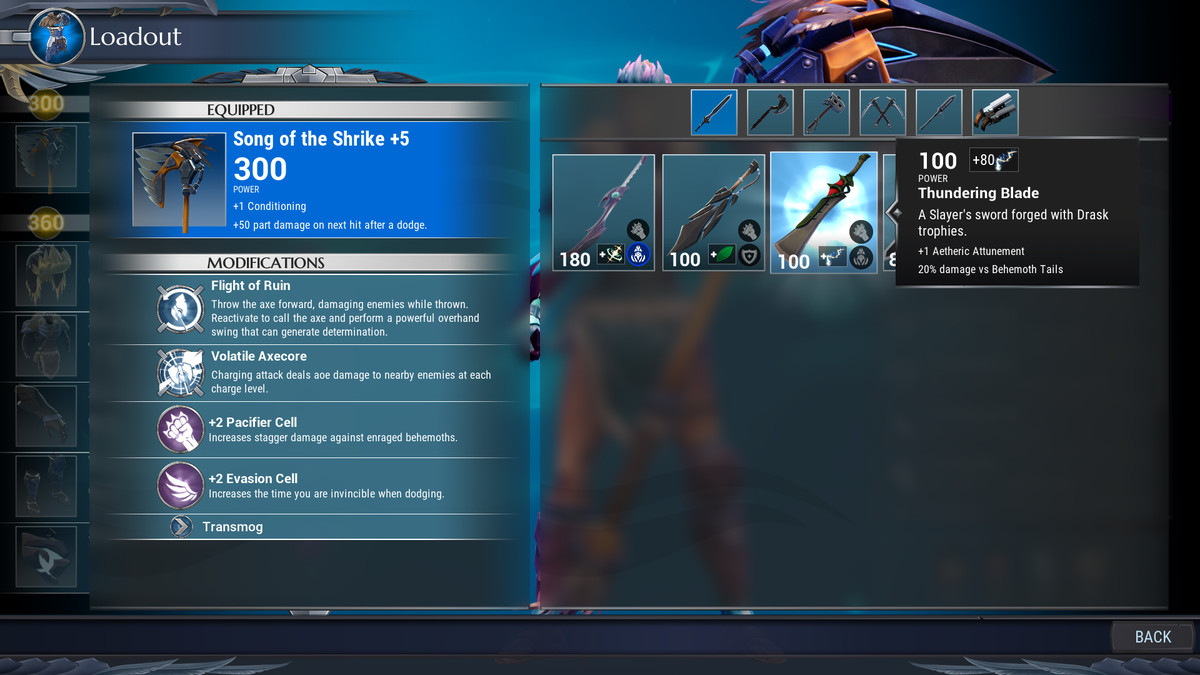 In the blocks under the weapon names, you can see the monster perks like “20% damage to Behemoth tails”
Phoenix Labs via Polygon

Weapons also have unique perks that depend on the Behemoths they’re built from. All Shrike weapons get increased damage after a successful dodge. Koshai weapons buff your next attack if you haven’t hit anything for an extended period of time.

Combining all these different perks can lead to some powerful builds. And against Dire Behemoths, you’ll need all the help you can get.

Dauntless doesn’t have a lives counter. Instead, there’s a Danger meter that ticks up when a player goes down and stays down. At 100% Danger, players won’t be able to revive allies.

In every hunt, every Slayer has five healing flasks and three self-revives. If you go down early, it can be tempting to mash that self-revive and get back in the fight. Don’t! Wait for an ally to come pick you up instead.

Use grenades to help and harm

A few hunts in, you’ll start getting quests from Janek Zai, the gun and grenade salesman in Ramsgate. One of the first quests is to deal damage with Barrage grenades. This will teach you how to add some extra damage as you hunt. There are also healing grenades that Zai will give you for completing quests. 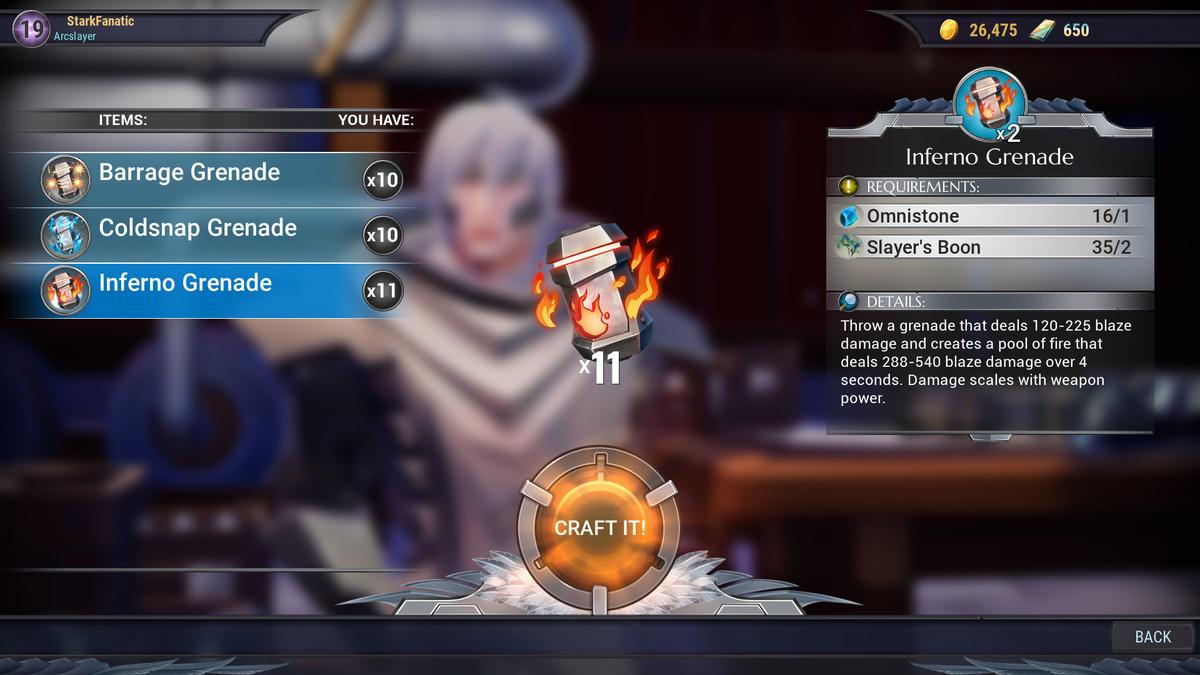 As you complete quests for Zai, you’ll earn new grenades. First you’ll need to add them to your loadout in Ramsgate, just like you do with Tonics. Then, mid-hunt, you can select them. Use your attack button in aiming mode to throw them and watch the carnage. Just add grenades to your loadout, and throw them at the Behemoth. It’s free damage that you can do from a safe distance.

Depending on the grenade, you’ll do a different kind of damage. Keep that in mind before you throw an Inferno grenade at an Embermane — a fire monster won’t take much damage from fire damage. But that also means a Coldsnap grenade — which deals ice damage — will deal bonus Embermane damage.