For over a year now, Fortnite has had a bearded suit-wearing skin, The Reaper, that everyone referred to as “John Wick.” And now there’s an actual John Wick skin, which is literally called John Wick.

The first thing that makes this inclusion strange is that, in order to set the real John Wick apart from the pseudo-John Wick, Epic Games designed the named character to look stern and serious. The Reaper’s cartoonish features, by contrast, fit more neatly into Fortnite’s brightly-colored world.

There’s also the fact that there are basically two of the same thing in the game now. Epic Games knows this, of course — the introduction video for John Wick has him facing down the Reaper. It’s inspiring all sorts of jokes in the YouTube comments of the announcement that riff off the likeness: 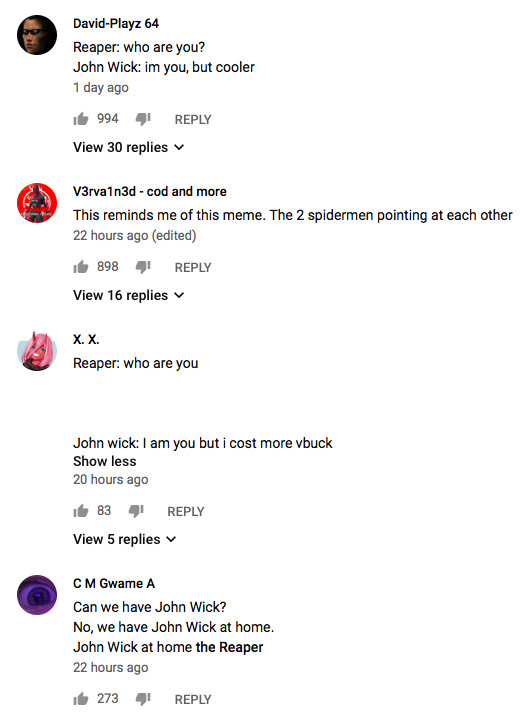 The biggest difference between the two skins is that the Reaper could only be earned back in season three as a part of the Battle Pass, whereas John Wick can simply be bought for money. Wick also boasts a number of embellishments, like a separate style option that makes Keanu Reeves look worn-down from all the gunfights.

An unexpected result of this tie-in is that some players feel slighted by its inclusion. If John Wick is being treated as the real deal, then the Reaper feels more like a knock-off parody than it did before, even if it’s technically a rare and well-respected cosmetic item. The Reaper has become a shorthand for highly skilled players who can take everyone down, like the real John Wick.

Some players, of course, take pride in the fact that they have the original skin — it still means something, after all. The Reaper tells a story, and that story is, “I was there, and you weren’t.” Even so, some players are miffed that they’re being asked to spend extra money for something that they thought they already owned.

“Use me as a ‘give Reaper owners the skin for free button’” says a Twitter user with over 2,000 likes on his comment.

“I’m honestly triggered this isn’t an extra variation for the real John Wick skin,” reads another Twitter response to the Wick announcement.

If this phenomenon seems strange, it’s partially stemming from Fortnite’s previous efforts to reward players who have owned a skin from the get-go. The Skull Trooper cosmetic, for example, gives access to a purple variant that you can only wear if you bought it when it was originally released, rather than when it returned to the item shop. Some Reaper owners feel that their loyalty to Fortnite should be acknowledged more than it currently is.

Over on Reddit, the negative reaction to the Wick skin has sparked multiple threads where players try to talk sense into those who are mad about the John Wick situation. One post, which has nearly a thousand upvotes, reminds fans that John Wick and the Reaper are two different skins. “Those begging for an ‘OG’ version already have one,” it reads.

A different thread points out that it’s silly to get worked up over something so banal.

“We shouldn’t let our precious ‘OG’ status or ego get in the way of appreciating new amazing content like this, and it astounds me that so many people are this insecure about a cosmetic in a free video game,” the Redditor says.

While most players seem happy with the current state of John Wick affairs, this mini-drama is a good reminder that much of Fortnite’s culture stems from its cosmetics — so of course people sweat the details.