Console gaming is usually reserved for the living room or game room. Once it’s set up and connected to a TV, that’s where it lives since a necessary component is the TV. If you want to bring your console over to a friend’s house, or on a trip where display availability is unknown, the Gaems Sentinel Personal Gaming Environment could be the answer (See it on Amazon). With a built-in 17.3-inch IPS panel, speakers, headphone jacks, and a way to secure your console, it covers all the bases for console gaming on the go. 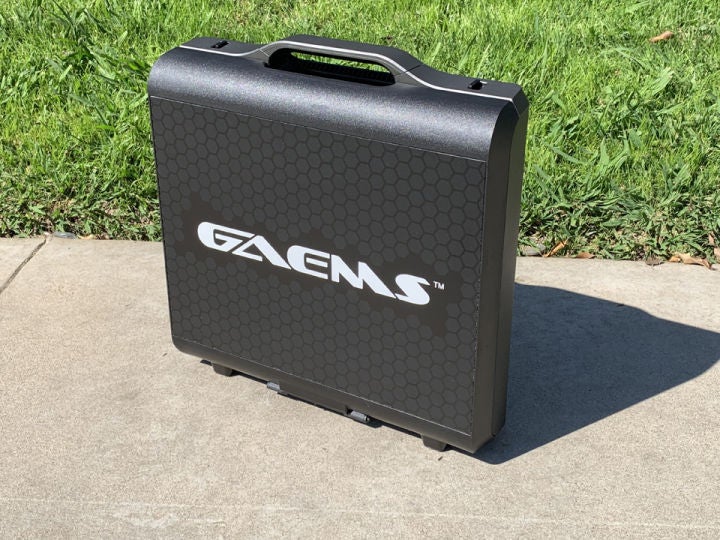 With the kickstand extended and the latches unlocked, the Sentinel opens to reveal a 17.3-inch 1080p IPS panel installed in the lid. Below the display are a selection of controls – power, volume, brightness, and menu select – flanked by two speakers.

Under the control buttons are two 3.5mm headphone jacks, a power supply port, and a HDMI port. There is a foam base on the interior of the Sentinel for your console to sit on with two Velcro straps to hold it firmly in place. The Sentinel will fit an Xbox One S or X, a PS3, PS4, or PS4 Pro easily. 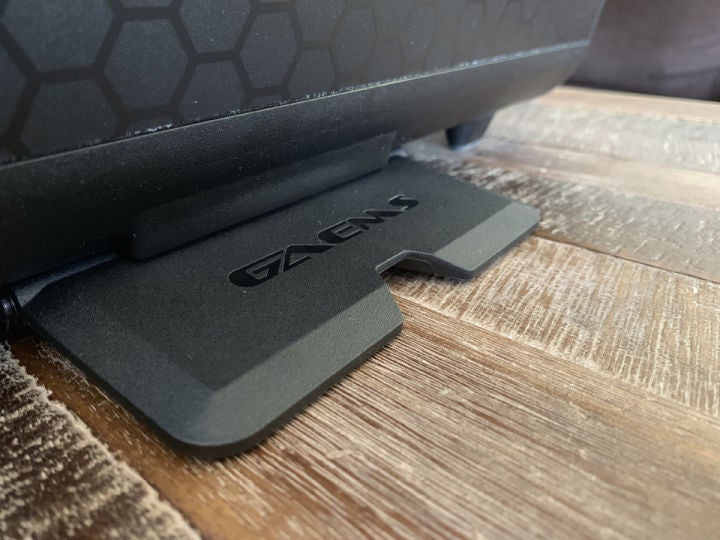 There’s no storage in the case for cables or controllers. In fact, there are numerous warnings about storing anything within the Sentinel in the product materials to keep the screen from getting damaged. The Sentinel instead comes with a padded drawstring bag to carry any cables and controllers.

It was tight getting two PS4 controllers, two controller charge cables, the PS4 power cable, the included short HDMI cable, the Gaems power adapter, and Gaems remote, but they did all manage to fit. With two Xbox controllers they poked out of the top a little bit. I wish there was a way to clip the bag to the outside of the Sentinel. 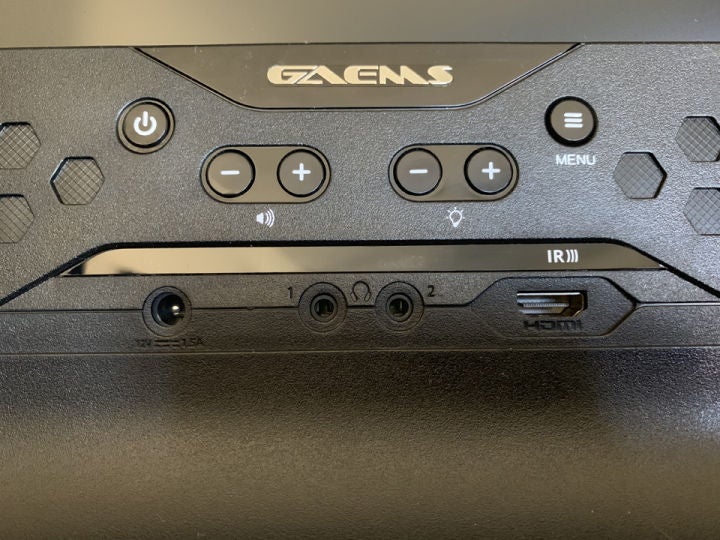 A small IR remote has all of the control buttons found below the screen plus a mute and directional buttons for navigating the menu. The buttons are raised and have a satisfying click. There is no backlight for when you use it in the dark. It’s nothing fancy but gets the job done. 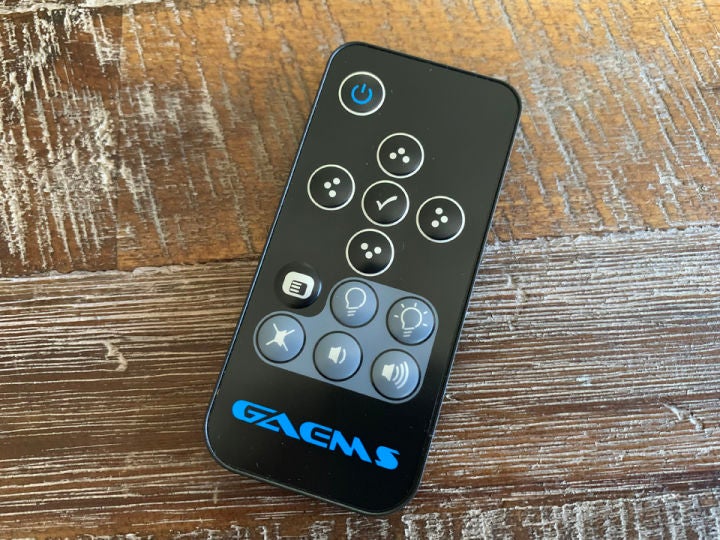 Testing was done with a Photo Research PR-650 spectroradiometer, a Konica Minolta LS-100 luminance meter, and CalMAN 2018 calibration software. When evaluating the color and grayscale of a display the term DeltaE is used to indicate how accurate a measurement value is. A value of 1 or lower is considered perfect as any deviation from the color is imperceptible to the human eye.

A value of 3 or lower is excellent and difficult to see any difference without scrutiny. Above 3 you can start to see distinct alterations in the intended color and that being displayed by the monitor. I used the standard preset for all measurements.

The default brightness setting put the display’s luminance output at 137 cd/m2 (also called nits). I recommend having a SRD display’s brightness at 140 nits, so it was nice that the Gaems is right at that target out of the box. It’s a good brightness level for use in situations with some ambient light. If you’re going to be playing exclusively in a dark room, I’d dial the brightness down a little bit to avoid eye fatigue.

Overall the image accuracy of the Gaems Sentinel is mediocre. The grayscale balance is heavily green and the grayscale DeltaE is 8.06, with the numbers trending worse as the gray gets closer to white. Color accuracy is slightly better. The primary and secondary color points all range between a DeltaE of 2.7 and 4.8. Red is a little undersaturated, while blue is oversaturated.

What it all means for gaming is that all the colors will look a bit off and unnatural. Dark and light skin tones will look a bit too orange, the clear blue sky will be very slightly purple, and green foliage might appear a little too yellow. 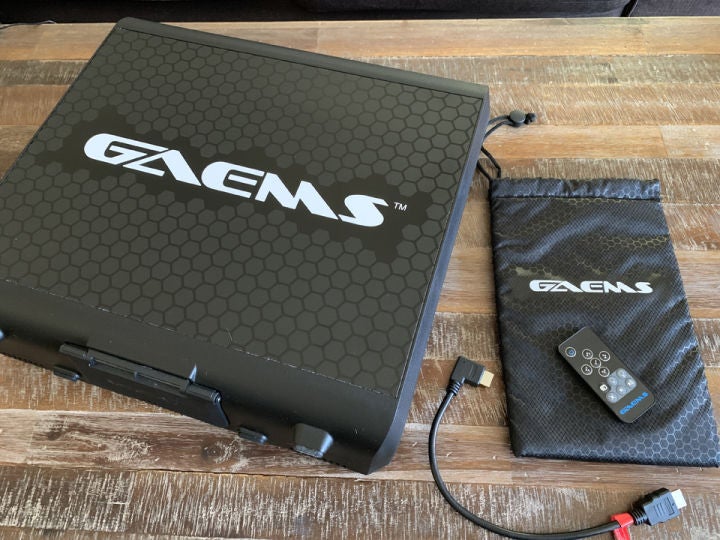 I strapped in my PS4 to see how Horizon Zero Dawn looked on the 17.3-inch IPS monitor. The Sentinel has its own separate power, so you’ll need to be sure to have two plugs available wherever you set up. It would be nice if there was a central power hub in the Sentinel that the console could plug into to minimize the extra cabling. It could also use a cable management system. It looks a little messy when everything gets hooked up. Just some built-in Velcro loops would go a long way.

First thing I noticed is how terrible the speakers are.

The first thing I noticed is how terrible the speakers are. The midrange distorts at almost any volume level. Every time Aloy or any NPC spoke, the sound would break up and crackle. There’s also very little bass. It’s the same issue with every monitor or TV speaker. A small driver is used because space is at a premium, but small drivers can’t reproduce low frequency sounds cleanly.

I ended up using headphones most of the time, although I usually plugged them into my controller instead of the headphone jacks on the Sentinel. Using the controller jack meant I still had chat functionality if I needed it, and I wasn’t tethered to the Sentinel if I wanted to lean back and relax at low-stress moments.

Horizon Zero Dawn has some beautiful scenery, although it looked a bit unnatural on the Sentinel screen. I was most distracted by the skin tones of all the characters, as if they all had been out in the sun too long. The color certainly isn’t the worst I’ve seen in monitors around this price point and it didn’t take away from the gameplay. The screen also does suffer from IPS glow that was evident during nighttime sequences in game.

The Gaems Sentinel excels at input lag. Using the Leo Bodnar 1080p lag tester, the Sentinel measured only 10.6ms of input lag. This will be imperceptible whether you’re calmly exploring a new world or frantically taking down your enemies.

The Gaems Sentinel has an MSRP of $349 and includes a padded bag for carrying accessories, a power supply, a short HDMI cable, and a remote. 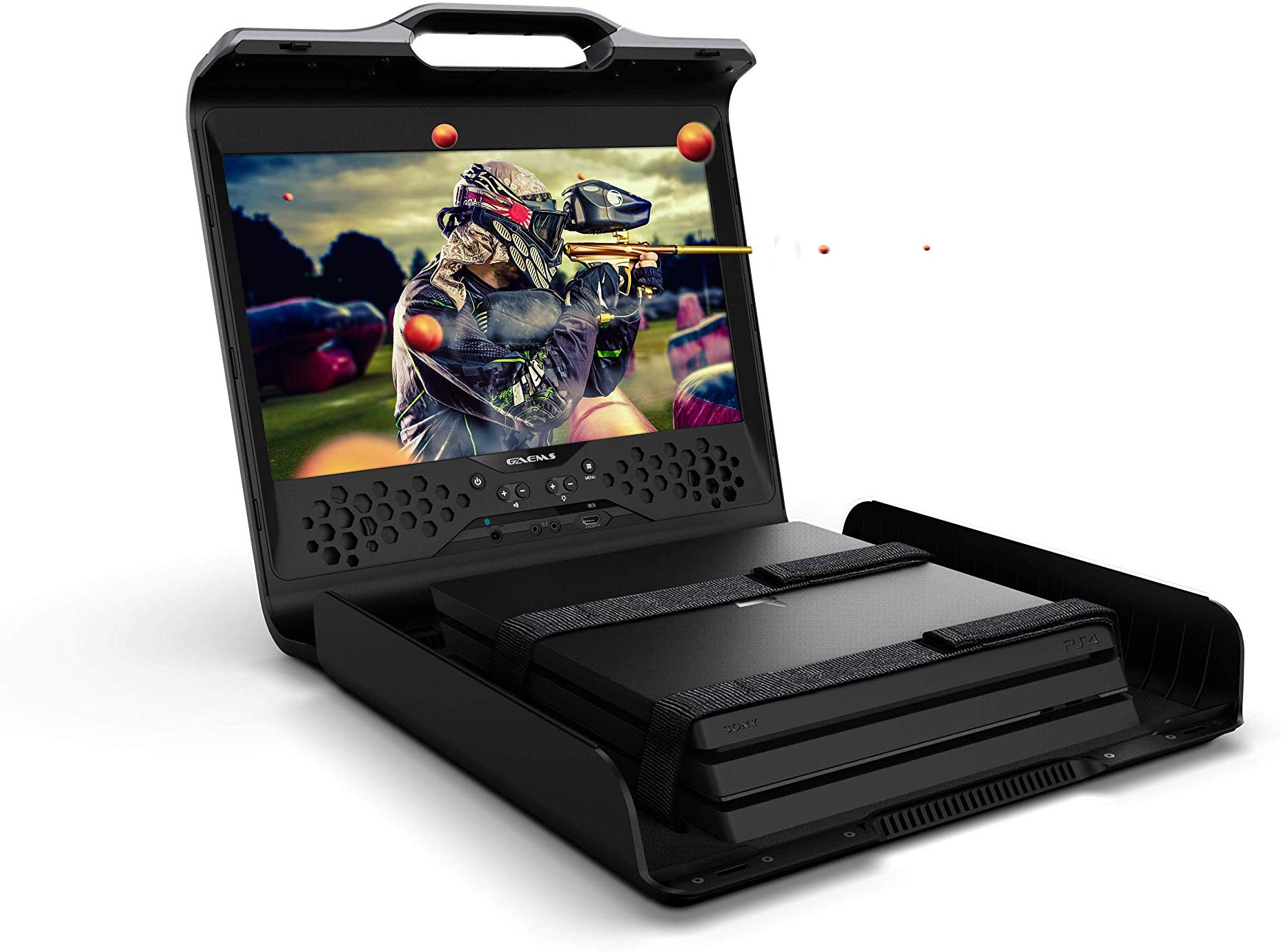 The Gaems Sentinel has some drawbacks – the display isn’t great, the speakers are awful, and it could use a cable management system. Still, if you’re looking to bring your console on a trip or just want to play at a friend’s house, the Gaems Sentinel gives you the portability and protection you need.