Grand Theft Auto Online has introduced a new casino, where players can unlock fast race cars or a fancy penthouse apartment. That’s pretty cool, but none of it would be possible if it weren’t for this poor man. The Diamond Casino & Resort’s valet is having a bad time, and it’s all because of us players.

The Diamond Casino & Resort has been turned into an active war zone, because players are camping out and taking advantage of the influx of new players coming in to check out the new content. These rascals are setting up fields of proximity mines, sniping from a distance, or just going ahead and flying through the driveway on a rocket car that shoots missiles. It’s an absolute blood bath, but no one has it worse than the poor valet.

While players can activate Pacifist Mode to avoid damage from other players and enter the casino unscathed, others have forgotten to switch this on. That means that they’re entering a giant thresher of murder every time they roll up to gamble.

While players can easily opt out of the destruction, the valet can’t enter Pacifist Mode! He’s forced to endure an onslaught of carnage and mayhem non stop.

When a griefer kills a player, he’s simply being a slight annoyance. The player moves on, spins the wheel, and goes on to enjoy a spree of hedonism and excess in the lap of luxury. In mere minutes, the encounter is gone from their minds.

Perhaps when they glance from the window of their lofty penthouse, they may think back to that experience and smile wistfully. The gift of being able to laugh at our prior griefing is something only players can experience.

The valet has no escape. He doesn’t have a penthouse to retire to later. Does he even have health benefits?

Yet despite these burdens, the valet still shows up for work each and every day to ensure that we can gain access to the casino. All of our flippant, short-lived pleasures are enabled by this man. And in return, we treat him like garbage. Is this commentary on how America treats people in service industry jobs? Are we meant to realize, perhaps by looking at the blood on our hands, the moral toll we’ve incurred by punching this guy like seven hundred times?

I’m not innocent, either. I was seduced by the siren song of seeing if he was some kind of special NPC. Was he perhaps amusing to fight in some way? Why were fans taking such joy out of attacking him? The idea that it could be just some joke, a string of cruelty done for the memes, was too much to bear. And so, I punched him. He punched me back, and it was a punch that a weak baby would throw. 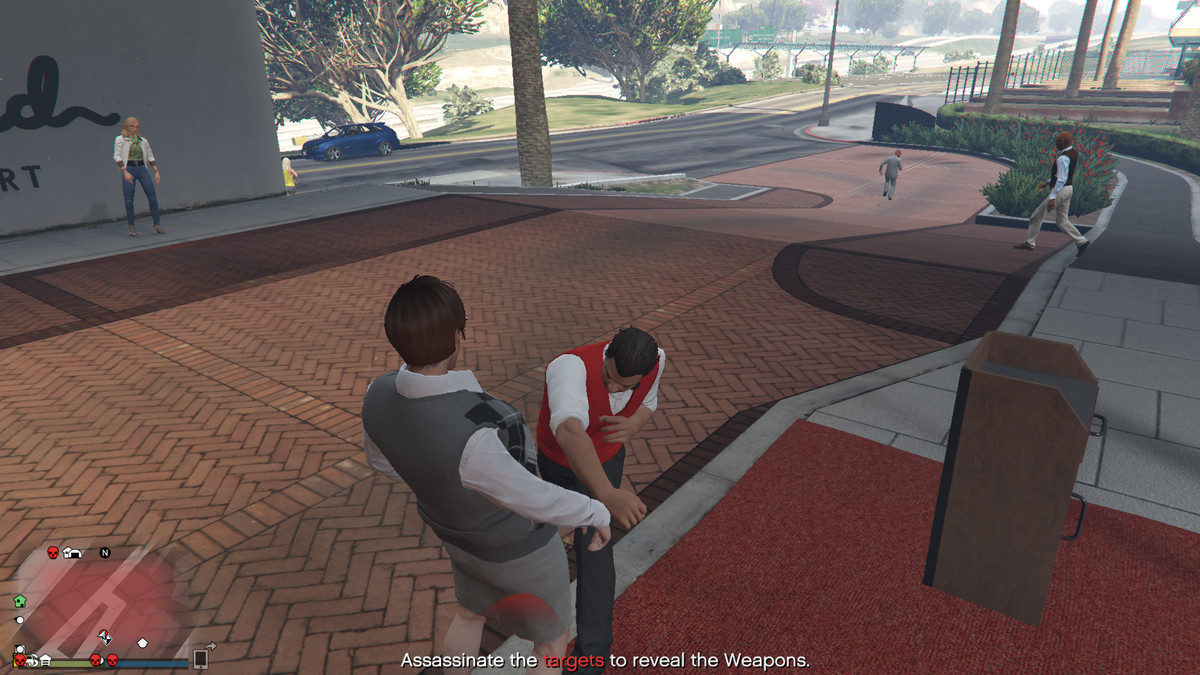 I didn’t even get a star for punching him! Grand Theft Auto Online’s infamous system of one through five stars is meant to tally and catalog each incident of crime, and punching this poor valet didn’t even register. Even society itself has turned its back on the poor valet. What crime could possibly carry the weight of this eternal hell as a sentence?

The valet’s clearly a talented guy, too. He’s parking all sorts of vehicles, like luxury convertibles and flying cars that shoot missiles and have a menacing horn that plays “Flight of the Bumblebees” without complaint. Big school buses, SUVs with the front smashed in, motorcycles, and military-grade recon vehicles are all within the valet’s ability to drive and park. Even if you subscribe to a cold meritocracy that demands we each prove ourselves in the world by providing value, this guy doesn’t deserve the torment being rained down upon him! Somebody help him!

There is hope. Some players have noticed the valet is willing to fight back. He’s getting stronger, faster, less willing to put up with our nonsense.

Please, Mr. Valet, don’t stop trying. Don’t stop training. I hope you, one day, emerge from the Diamond Casino & Resort as an extremely ripped monster of a man with sick pythons and big pecs. Rain down vengeance on us, the arrogant player base. I won’t be satisfied with GTA Online’s storytelling until this casino valet destroys me and my entire life. It’s what I deserve.