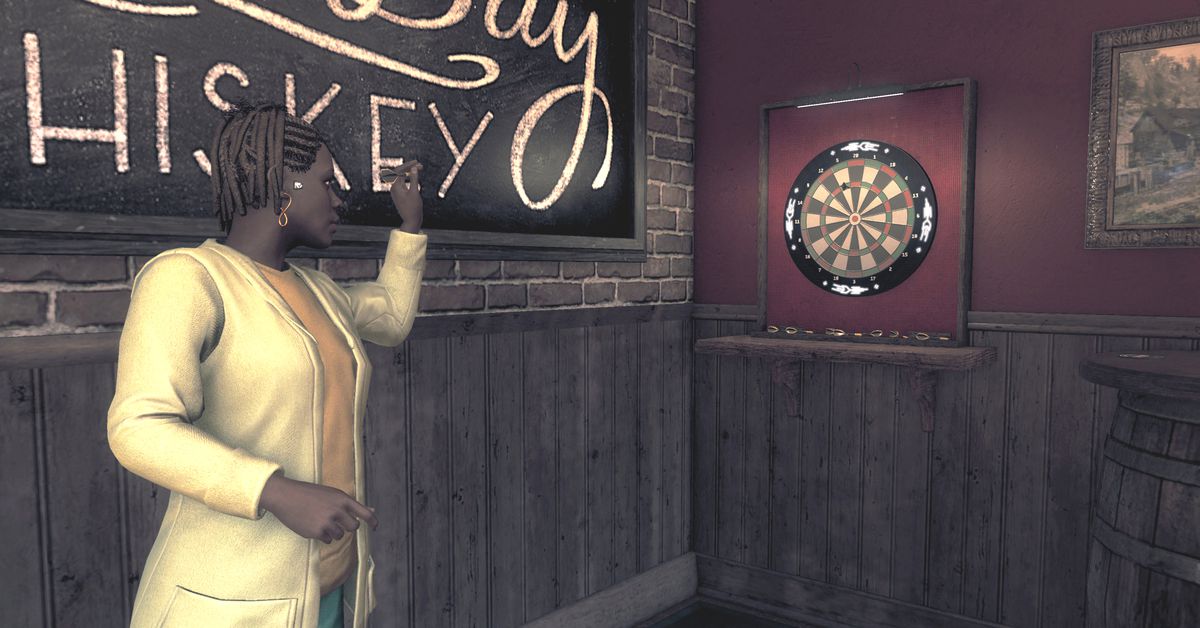 In this morning’s preview of Watch Dogs: Legion Online, I said I was really looking forward to throwing darts online against other human players once the mode rolls out March 9. That’s sincere. Whenever I duck back into near-future London and end up in a pub, especially when fast-traveling back to DedSec HQ, inevitably I wind up playing five or six rounds.

I swear, I’ve booted up this game specifically to play darts, putting it down altogether when I was done throwing.

Not that there’s anything wrong with that! The darts in Watch Dogs: Legion helps round out my portfolio of sports video games nicely. (Did you know the last full-title darts video game on consoles was Rebellion’s PDC World Championship Darts Pro Tour for PlayStation 3 and Xbox 360 back in 2010? I did not. I was probably still playing darts with Little Jacob and Roman at Grand Theft Auto 4’s beer garden back then.)

And look, Ubisoft Toronto made a good minigame. Watch Dogs darts is simply conceived and well executed. You steer the reticle, with swoopy, imprecise handling, over the area you’re aiming for. The expanding and contracting reticle indicates the random area in which your dart will land. Smaller reticle = better throw. Naturally, the reticle is also moving and impossible to hold stationary, leading to some missed opportunities and rushed throws. Just like darts.

Of course, everyone knows that, in Watch Dogs: Legion, you can play darts while drinking, and the screen and soundtrack warp to ramp up the difficulty. Darts victories pay out ETO, the in-game currency that buys all those punk fashions. That will probably become more important as Watch Dogs: Legion Online implements a season-based schedule in-game content.

What I want to know is, does the minigame support two-player competitive drunk darts, or is it sober-only? (Simulated intoxication is another area in which Watch Dogs: Legion resembles Grand Theft Auto 4, by the way.) And if drunk darts is supported, can one player be blitzed and the other OK to drive? Or must both be smashed? I forgot to ask this during the preview event last month.

But as you’re still recruiting NPCs to your cause in Watch Dogs: Legion Online, I guess it means you can bond with a drug dealer through the power of darts.

Anyway, I get it — why the hell would there be a darts video game on its own, when anyone that enthusiastic about the sport can just buy a dartboard of their own and put holes in their basement drywall IRL?

It seems we’re stuck with darts only as an immersive side activity on the big buffet of open-world games. If so, Watch Dogs: Legion’s version is about as good as it gets.

Will Miles Morales Appear In Spider-Man: No Way Home? This Easter Egg Suggests He will