While MLB The Show 2019 has its fair share of small improvements across the board to help freshen things up, it also feels like the first substantial improvement in years. Yes, the core gameplay is very familiar and Franchise Mode remains nearly identical to last year’s, but Road to the Show serves as the culmination of years of improvements and a new mode, March to October, is a novel way to experience the MLB season.

How good a player is at fielding his position has never been easier to spot, thanks to color-coded fielding icons. Gold indicates an elite fielder, while gray and blue icons let you know you might be dealing with an error-prone defensive liability.

A top-ranked outfielder shows you the path the ball will travel.

Another neat way that outfielders are differentiated is their ability to read a ball off the wall. When you take control of a top-ranked outfielder you’ll see the path the ball will travel pop up on your screen to guide you to exactly where you need to be. However, take control of a subpar fielder and that path is a little less distinct and not nearly as complete. This visual aid is a good way to bridge the gap between the athlete’s abilities and your own skills.

Unfortunately, there are still times when controlling a fielder feels a little clunky. It’s almost as if the game wants you to move close enough to the ball so that a pre-scripted animation kicks in, and it’s most noticeable when chasing fly balls and in Road to the Show. This issue has plagued The Show for years, and while it’s not game-breaking, player movement in general lacks the fluidity of other major sports games from EA and 2K.

However, some new infield animations chip away at this problem. I’ve seen a few instances where fielders botch a ground ball attempt, only to recover and get the out. I don’t recall seeing as many of these in the past; while they aren’t overdone, these animations make infield play feel much more organic.

March to October is designed to quickly get you through a single season.

One of the new modes is March to October, which is designed to quickly get you through a single season by blending simulated games with key playable moments. Long-time Show vets will likely scoff at what might be seen as a watered-down return of season mode, which was removed from last year’s version. But there’s value in what this new take on the idea offers, even if it isn’t executed quite as well as I’d hoped.

After you select a March to October team, you are provided with a nice 2018 recap video and then immediately dropped into the late innings of 2019 Opening Day. Depending on your performance, you gain or lose momentum, which in turn impacts how your team performs in the simulated games which tick by until the next key moment pops up.

An adequate variety of situations, from salvaging a series to having a productive game with a specific player, make this mode a welcome addition, though it’s currently a little too shallow and not entirely fleshed out. For example, while momentum looks like a resource you earn and then spend on simulated wins, it’s much more abstracted in practice because there’s no clear relationship between momentum and winning games. On top of that, while I appreciate the ability to play through a season in a few sittings, without more direct control over your farm system and transactions it feels less dynamic than a true season mode. Context for most games is provided by specific commentary from new in-game reporter Heidi Watney, but other than that there’s little in the way of the kind of world building we get from the audio recaps found in Franchise mode.

Still, I like the idea that each team’s season is essentially a mission within a larger game, complete with organizational specific prizes. I would guess there is a large percentage of casual fans who will appreciate the ability to get through the entire baseball calendar in a few hours, even if it feels more like a choose-your-own-adventure game than a full-fledged GM mode.

Meanwhile, Road to the Show sees several new upgrades and continues to be my favorite way to play The Show. It’s slowly turning into a true RPG sports experience. Archetypes return, giving your created player a template in the form of a historical and current player. You might want to select the Anomaly, modeled after the speed and power of Ken Griffey Jr. and Jose Ramirez. Or maybe you prefer the Pure Power of Giancarlo Stanton. After you select one of these “classes,” you choose a primary personality out of four different types. These personalities intertwine dialogue choices, player relationships, and the perk system that have been around for a few years. While it verges on being needlessly complicated, the personality system does a nice job of connecting these various abstract aspects of a player’s career.

For instance, a Captain-type player will be rewarded for selecting dialogue choices that put the emphasis on the team instead of himself. Meanwhile, this personality prioritizes building relationship with other players. Both of these actions allow him to level up, opening new perks to equip in game.

These perks are organized on a tree, very reminiscent of RPG skill paths or a 4X tech tree. Each perk is connected to a personality, which makes them much more thematic than in the past. For instance, one perk for the Maverick personality – one that thrives on rivalries – gives hitting bonuses when playing against a team from the same division.

Also new are a series of training minigames which use your own skills to improve those of the virtual athlete. There’s a wide range of games, from weightlifting to reaction time training. While some of these are barely related to baseball, such as those played on a virtual phone, they do offer a unique way to level up your athlete. They also remind me of some of the games available in the benchmark baseball game MVP 2005. Overall, the minigames are fine; they are a relatively harmless addition.

The main event is pretty much the same as last year’s Road to the Show: each action leads to points that are applied to various skills. Take a ball and your plate discipline will increase. Get picked off and your stealing rating will drop. This year, though, dynamic challenges make things a little more interesting. At various points in a career you are provided with a set of increasingly difficult tasks to choose from, and if you’re successful at it you gain a boost to a related ability. Short-term challenges, like driving in one or more runs, ramp up the tension for a key at-bat. Others are long-term, such as getting six hits over the next three games. These long-term challenges, in particular, give weight to a whole series. Go 0 for three in the first of those three games and the intensity for the next game really increases. These challenges certainly spice things up, but at the same time gamify Road to the Show in an artificial-feeling way. I’m not sure that “get a single with a power swing” would ever be said to a hitter on the real diamond.

However, when the challenges mix with triggered perks, they create exciting opportunities to not only boost your player but help the team win. For instance, a power-hitting first basemen I created was given the goal of driving in a run using a power swing, and his Lighting Rod perk gave him the ability to focus (slow down time) for one at bat. That perk made the challenge easier and, after a belting a home run, I saw significant gains in the power department. Using a Lightning Rod perk that gives you a buff on 0-0 counts works when you select challenges that encourage you to be aggressive. These decisions of what challenge to accept and when to use which perks are among my favorite additions to The Show 19.

Coupled with the minigames, aspects like dynamic challenges, personalities, and perks have moved this mode away from a pure baseball simulation. That might be troubling for purists, but for my money all of these additions are for the better; the focus may be drifting away from the field but not from fun.

Despite all of those improvements to Road to the Show, Franchise Mode sees very few upgrades. This is becoming a trend for The Show; where Franchise was once a cornerstone of the series, it now seems lost among the increased variety of new and improved ways to play.

What few upgrades are here are significant fixes to long-time problems, at least. First, contracts now more closely mirror real-life contracts, both in years and money. Even though you’re limited to 40-man rosters, this welcome addition creates a greater sense of authenticity and realism.

Secondly, you can now re-sign players in the middle of a contract, just as the Angels recently extended Mike Trout. This is a much-needed addition, as the fictional contracts of the past took away from the authentic experience that Franchise mode tries to reproduce. However, players seemed too ready to accept a cheap, long-term extension. I was able to extend J. T. Realmuto for six years at $60 million, which is well below what he will likely eventually earn.

Across the entirety of MLB The Show 19, new presentation elements look and sound great. Improved score widgets offer more relevant information than before, such as the current batter’s hitting line for the day. The various broadcast packages, including one that mirrors the MLB Network, look appropriately modern and enhance the illusion that you are watching a televised game. Also, new dynamic camera angles kick in when you select your pitch, breaking up the monotony of looking at the back of the pitcher. The aforementioned sideline reporter Heidi Watney skirts the Uncanny Valley, but generally offers interesting and timely commentary.

Speaking of commentary, I’m still not excited about the three-man team from last year, but it’s not altogether terrible. One strength is that there are many new lines of dialogue that seem to reference specific situations. I don’t recall Matt Vasgersian listing baserunners by name during a bases-loaded situation as he does this year, for instance. However, for each new and interesting line of commentary there’s an example of a line that’s annoyingly overused. I can’t tell you how many times Mark DeRosa has already mentioned “ambush tactics” when describing a first-pitch swing.

MLB The Show 19 continues the series’ slow march of progress, though with a bigger step this year than last. Road to the Show has evolved into one of the deepest sports career modes currently available, while March to October is a bit light but holds value for anyone who can never quite get through a whole season without simming games. Its refreshed looks and sound closely replicates games on TV, thanks to some fresh camera angles and graphical touches that emulate broadcasting. Among offline modes, only Franchise is remotely disappointing, mainly because it sees the fewest innovations. However, the new financial authenticity will appease those of us who strive for realism in every corner.

While there are major online modes that I haven’t experienced yet, the offline portion of MLB The Show 19 feels fuller and more finalized than ever. At this point, if I had to score it now, I’d rate MLB The Show 19 as an 8.6, for great. Check back at the end of the week for my final review. 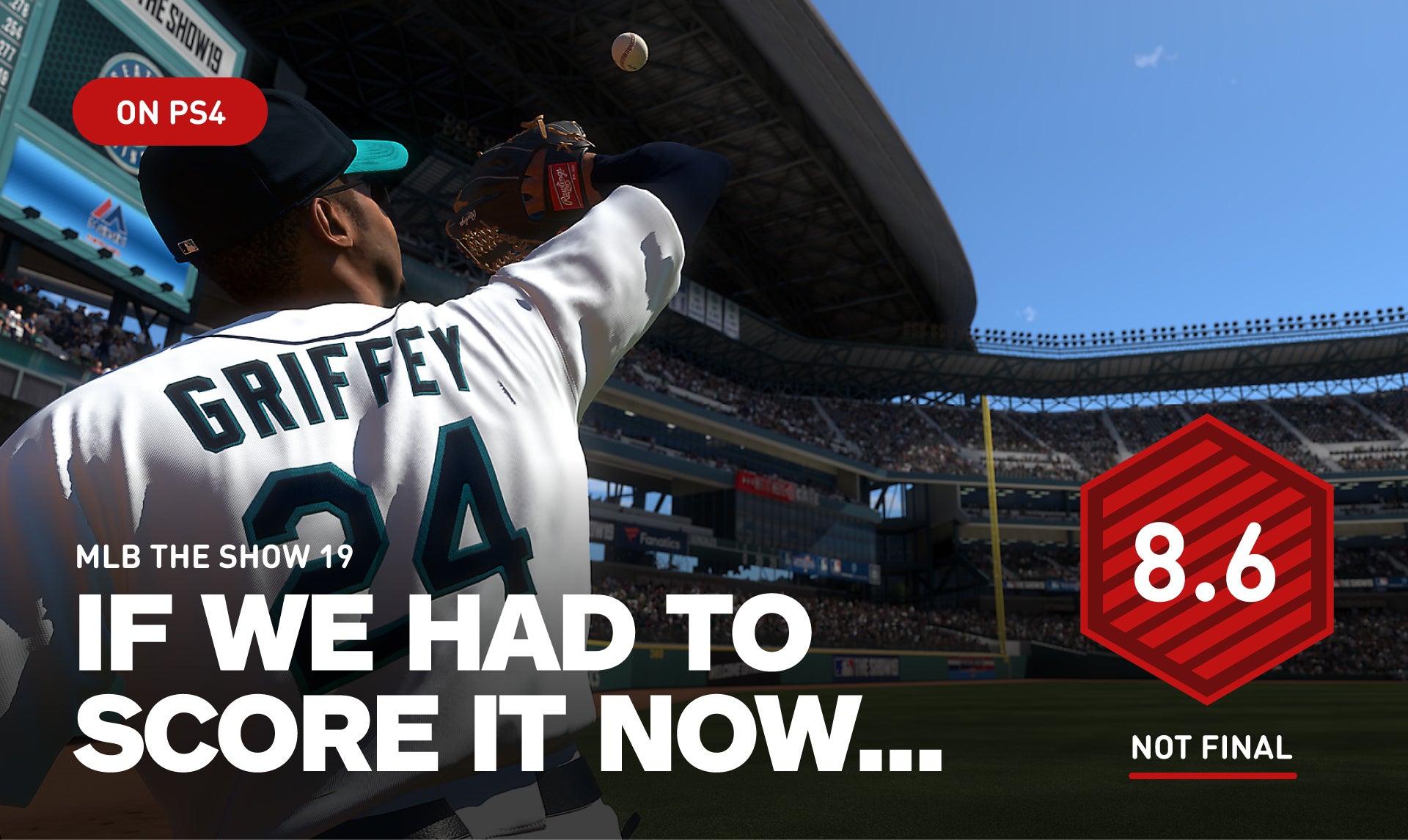